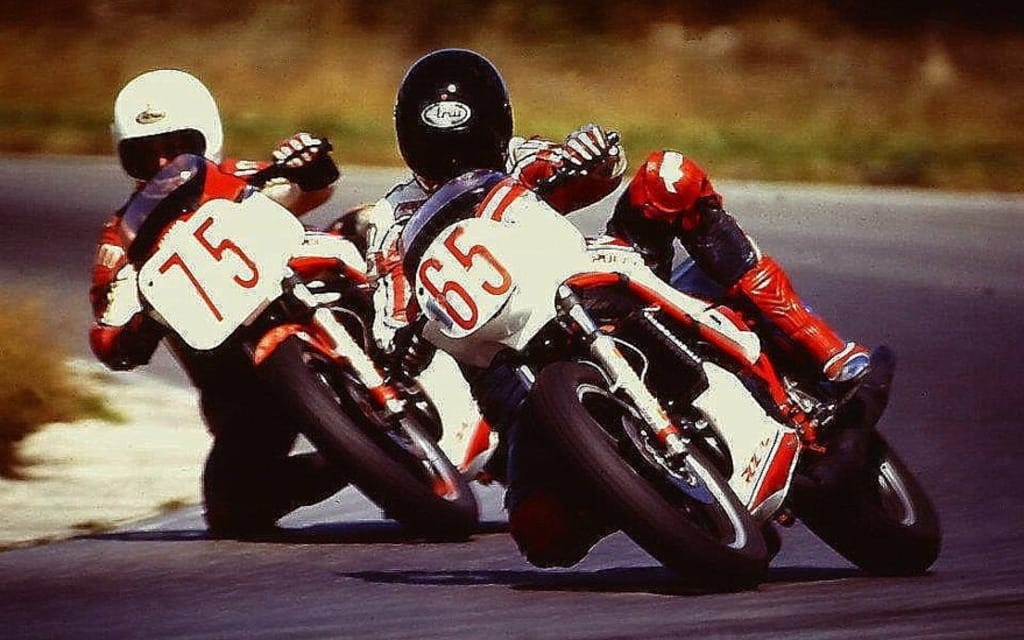 Al Royer.
Just a name lost on a seemingly endless list now but many of you remember a fierce talent that was wired with intensity, sportsmanship and humanity. Maybe you met at Shannonville in the ’80s or, like me, more recently on a twisty road as he closed the gap and flew wingman, waiting and watching, deciding.

He matched my every move and I realized later that Al contemplated me and not simply when it was safe to pass. It wasn’t long for trust to develop. He never bragged or used his abilities to impress but instead a reserved expert with a quick smile and honest advice welcomed you into friendship.

Our group consisted of 15 full time riders but it was so much more. Friendship, knowledge and skill bound together a tightly knit pack with whom Al and his shy woman found a home but then, one warm summer evening, he was added to the list.

We decided to go. I found just two of our group waiting and as we stood quietly staring at our boots I realized that no words were needed, so we buttoned up and left. Breaking free onto the open road we headed north to our familiar playground as the beautiful summer morning segued to a pale imitation.

The morning sun cast deep shadows on the 507 and as I watched my mirrors for a mate who would never appear, we carved one of Al’s most revered roads. Twisting through southern Ontario’s cottage country this fabled jewel is rife with blind corners that offer thick forest or deadly rock as run off. Add the ever-present threat of wildlife and it’s plain to see why so many of us have been judged there.

Slowing for Gooderham we echoed Al’s final run and with our normal competitiveness absent, turned south flashing through the shadows across our path. Finding solace in the very thing that caused our grief, we rode to mesh life with death and bring our world back into balance.

Like brothers we flowed together and leading, Lee raised his left arm followed by Grant and we were there, the corner where our friend was suddenly added to the list. I remember thinking something was very wrong with that spot with so many likely suspects ridden with aplomb, just to crash in such an easy turn. A horror found him that evening and like so many of our lost no one will ever know why, except maybe one. I mentioned Al’s wife and forgive me, so many years on I’ve lost her name. A quiet girl, yet competent on her mid-sized standard as she trailed behind her much faster partner.

Haunted by a ghost, the shattered black and silver plastic spoke to me as I stood facing the rock cut and listened to Al rave about his new 954. The pieces were so small and it was then I realized engine internals lay half hidden in the lush roadside grass.

I saw where it all went wrong in those black marks and curse my imagination for drawing it all for me in my mind. Like a slow-motion movie, I saw my friend die.

The realization and sharp inhale as the chain snatches wildly and the noise that makes. The huge eyes and a scream choked down to a grunt as muscle memory tries to save it all. The sublime violence of energies breaking free from control and finally the acquiescence a moment before the end.

Turning back to the ditch I met Lee’s eyes. He motioned to something in his hand and focusing closer I understood. The morning dimmed as I watched Lee turn, step to the rock and gently place Al’s broken glasses above a horrible scar made by a prized Honda Fireblade just days before.

Well-timed downshifts brought a group of sport bikes to us and seeing our machines on the roadside they must have thought the worst. In full gear they paused and behind dark visors, waited for news. Without words, how do you say “Thanks for stopping. We’re fine but a good man died here.” I couldn’t figure it out either so trying my best to muster a smile I flashed a thumbs up and with a nod, our brethren left. The way he paused before feeding clutch and fuel and the look that he fixed on me, that lead pilot knew.

Lee and I listened as the forest defeated revving engines and as the lyrics of our home took over I noticed Grant stood on asphalt that was damaged and raw, the evidence of a wreck thrown back onto the road. Lee joined me and as we reached our friend his wild eyes told me a thousand words and yet nothing at all. He pointed to our feet.

Individually we had wondered if Al’s girl was with him that terrible evening and Grant knew the answer. As Lee and I stared in disbelief the horror on the road consumed that summer morning and left boot prints to outlined where her broken man had lain on his favourite road.

Visions overtook me then and I saw through her eyes, imagining what I could not know. The headlight illuminates a nightmare, revealing her smashed lover and time stops. The panic as she runs to him. Reaching for her, he tries to move for the last time. She screams at the gathering darkness.
“Let’s go home.” My voice from a million miles away.

That’s my story. With their darkness stirred by my words Allan’s wife Geraldine, daughter Jennifer and mother Laurette have reached out to graciously acknowledge this tale. For so long I have wondered and now I know the truth, thank you Geraldine.