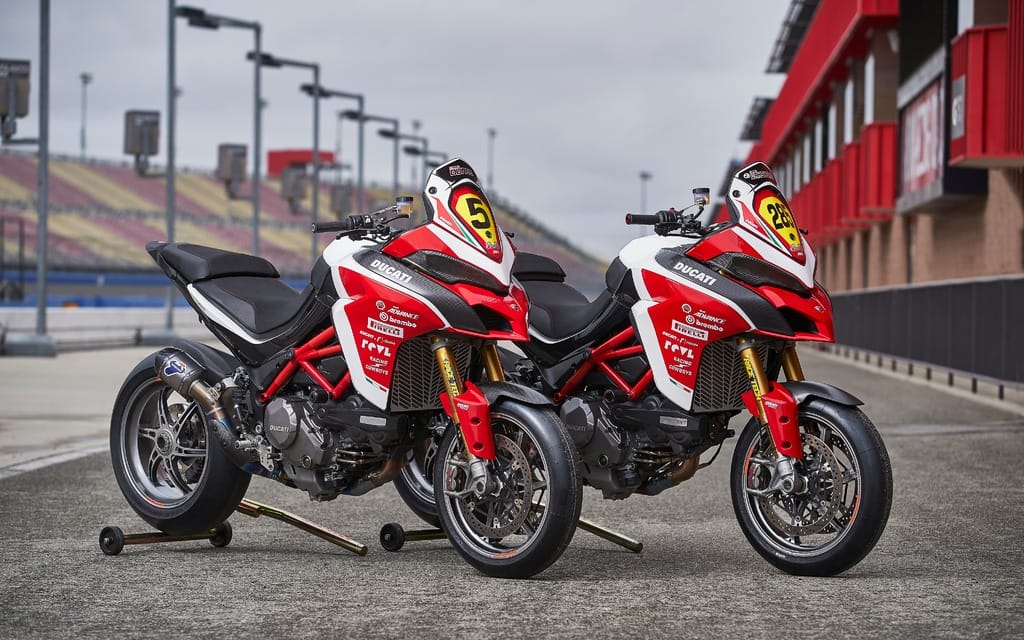 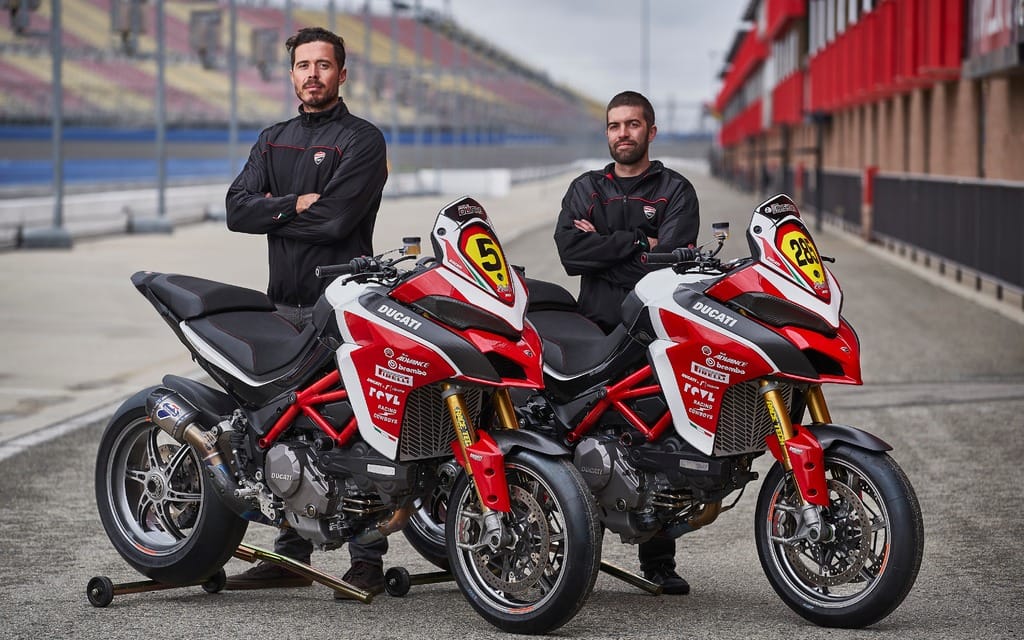 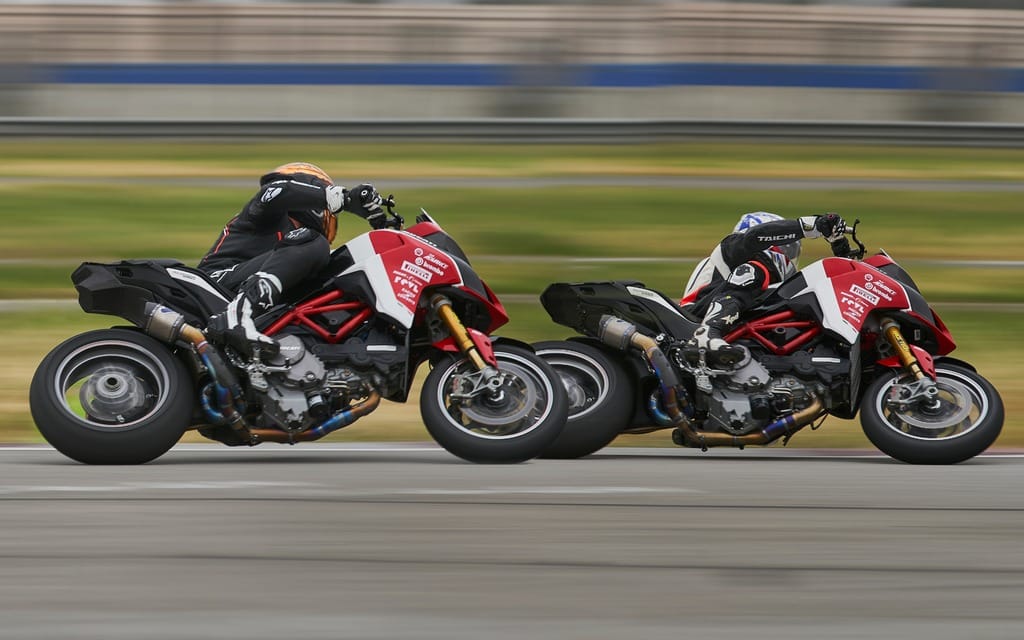 Mountain View, Calif. (May 16, 2018) – Ducati has set its sights on taking back the course record at the 96th annual running of the Pikes Peak International Hill Climb (PPIHC), set to take place June 24. The Ducati team record holder, Carlin Dunne, and current middleweight record holder, Codie Vahsholtz, make up the 2018 Spider Grips Ducati Pikes Peak team. This year’s race will also include the exciting introduction of the new Multistrada 1260 Pikes Peak to the historic “Race to the Clouds.”

This will be a must-watch event for race fans and Ducatisti around the world. Ducati has secured six victories on the mountain since the company’s debut in 2008 and held the all-time course record from 2012 until 2017 a year in which Ducati was not part of the official race competition.

This year marks Dunne’s return to Ducati’s racing team. In 2017, he led the Pikes Peak Squadra Alpina as part of the Race Smart program, which was created in 2016 by Ducati in partnership with the PPIHC. The program utilizes the experience of former champions to ensure all rookie motorcycle entrants have the highest level of preparation and knowledge prior to the sinuous course.

“After holding the course record for many years, we had decided to use our experience on the mountain to help support the safety of riders with the introduction of the Squadra Alpina program and keep the tradition of motorcycle racing on the mountain. Our efforts proved to be successful,” said Jason Chinnock, Chief Executive Officer of Ducati North America. “After 2017, when Dunne’s record was finally broken by a small margin, it inspired us to race again with the goal of reclaiming the title. The riders, team and new Multistrada 1260 Pikes Peak are destined to be a force on the mountain.”

New to the team is rider, Codie Vahsholtz, a Colorado native who comes from a family of Pikes Peak champions but established a series victories of his own with the record time in 2017 for the Middleweight Division, the record time in 2015 for the Lightweight Division and in 2013 for the 250 Pro Class. With the 19 victories of his grandfather, Leonard Vahsholtz and the 23 wins of his father, Clint Vahsholtz, Codie carries on the family legacy with the most Pikes Peak victories of any family.

The “Race to the Clouds” takes place on Sunday, June 24. Over the span of 12.42 miles, racers partake in 156 turns to reach the 14,115-foot summit. The first PPIHC was held in 1916 and continues to be one of the world’s most challenging road races.

The debut of the Multistrada 1260 Pikes Peak will showcase the versatility of the new, larger displacement Multistrada. The 1262 cc Ducati Testastretta DVT engine delivers 18% more torque in the mid-range and is paired with a redesigned chassis for increased stability. In addition, the motorcycle is fitted with a cutting-edge electronics package with distinct Riding Modes, Cornering ABS, Ducati Traction Control and Wheelie Control to improve control in all conditions on the mountain. A motorcycle built for sport adventure, the new Multistrada 1260 is available in the standard version, the Multistrada 1260 S and Multistrada Pikes Peak.

Additional information about Ducati, including participating dealers and availability can be found at www.ducati.com.

Ducati Motor Holding S.p.A. – A Sole Shareholder Company – A Company subject to the Management and Coordination activities of AUDI AG

Founded in 1926, since 1946 Ducati has been manufacturing sport-inspired motorcycles characterised by high-performance Desmodromic engines, innovative design and cutting-edge technology. With its factory located in Bologna’s Borgo Panigale district, in 2016 Ducati celebrated 90 years since it was founded. The model range covers several market segments with the following families: Diavel, Hypermotard, Monster, Multistrada, SuperSport and Panigale. In 2015 Ducati presented the Ducati Scrambler: a new brand made of bikes, accessories and apparel that provide the last word in creativity and self-expression. These authentic icons representing what the world knows as “Made in Italy”, together with an extensive range of associated accessories and technical and lifestyle apparel, are distributed in 90 countries globally. Breaking all records for the company, in 2017 Ducati delivered to customers 55,871 bikes to customers. Ducati competes in both the World Superbike and MotoGP World Championships. In Superbike, Ducati has won 17 Manufacturers’ titles and 14 Riders’ titles. Ducati has been competing in MotoGP since 2003, winning both the Manufacturers’ and Riders’ titles in 2007.