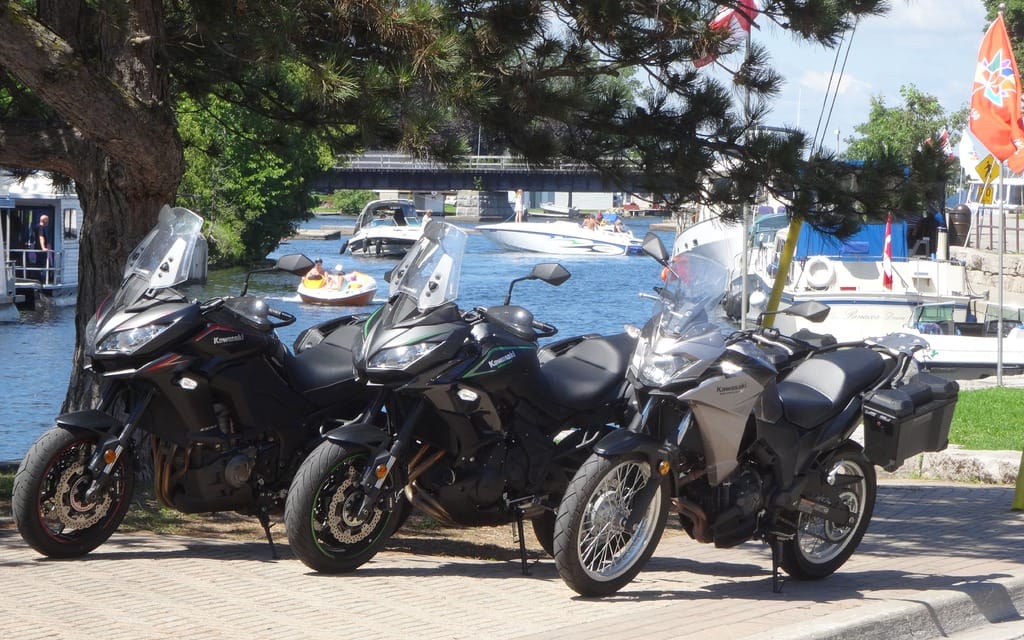 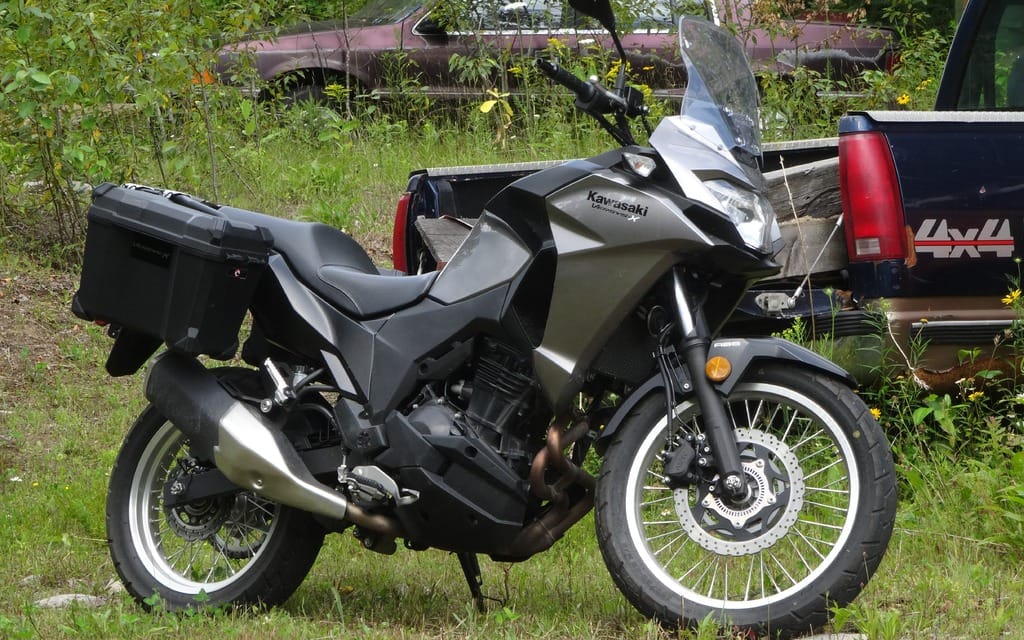 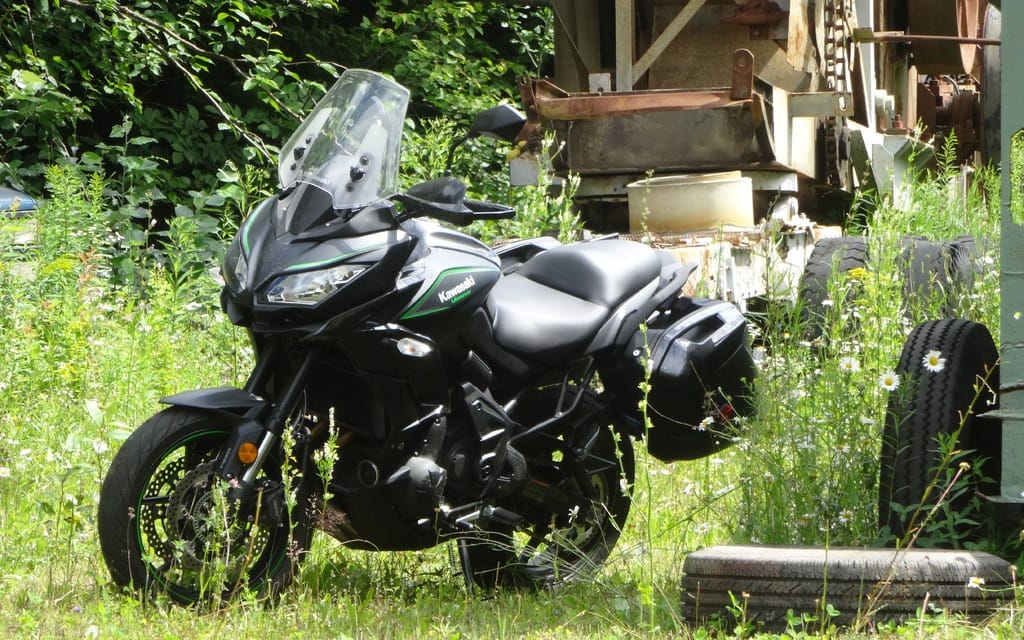 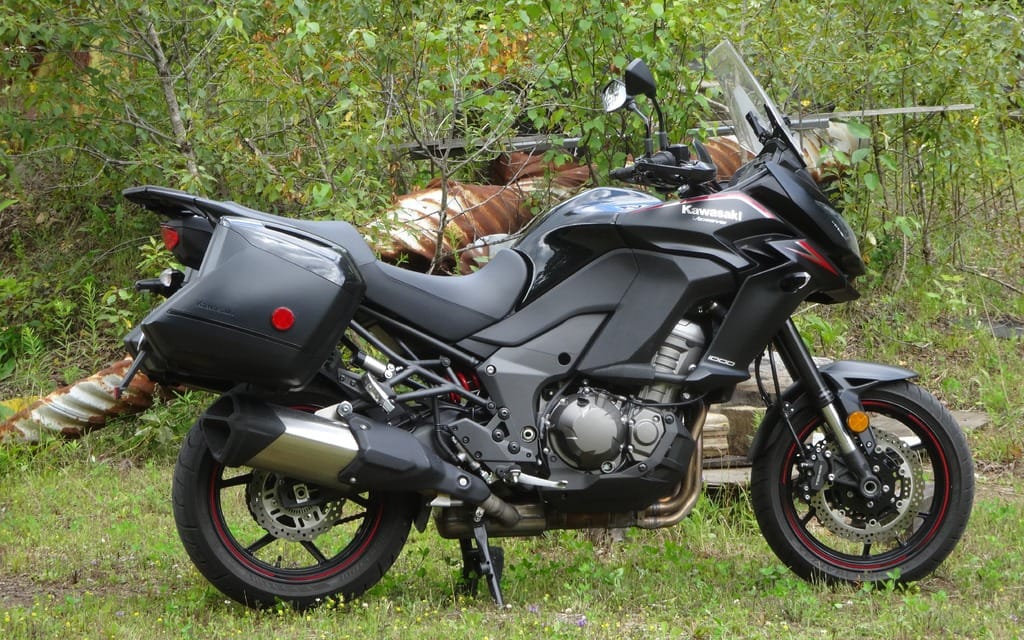 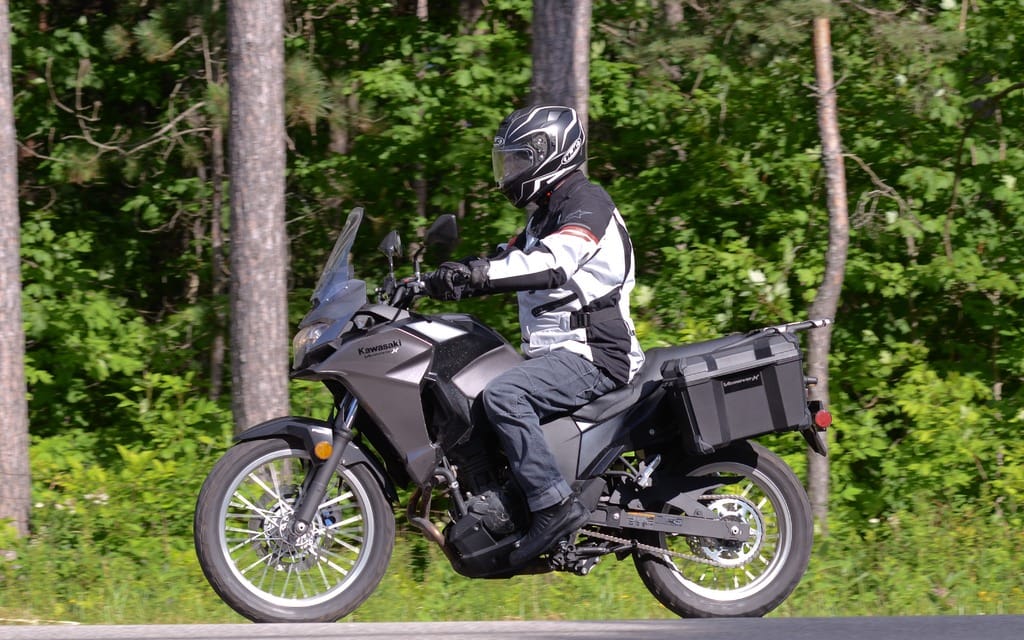 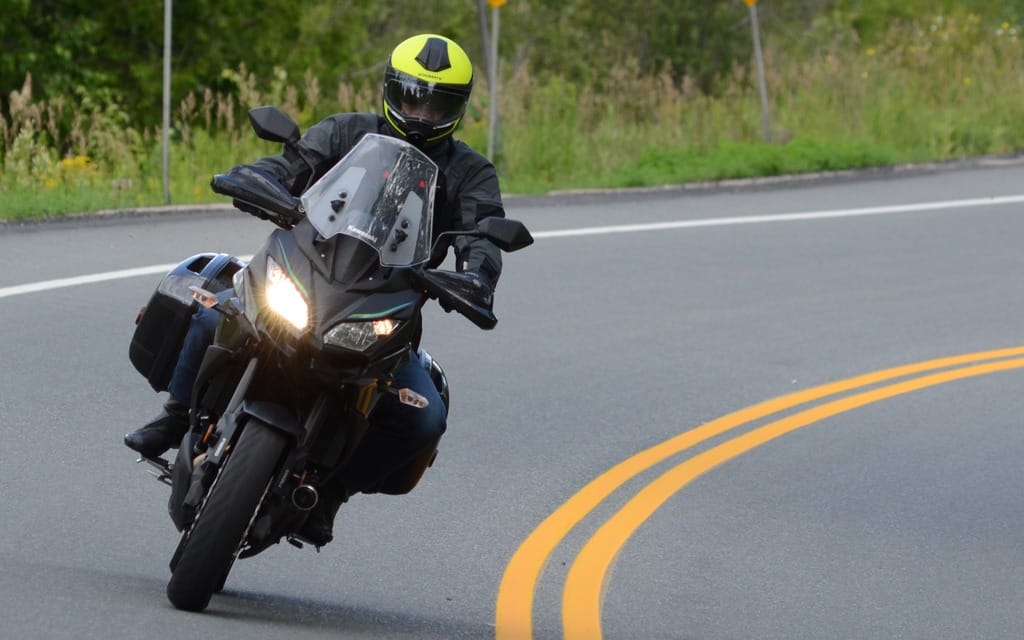 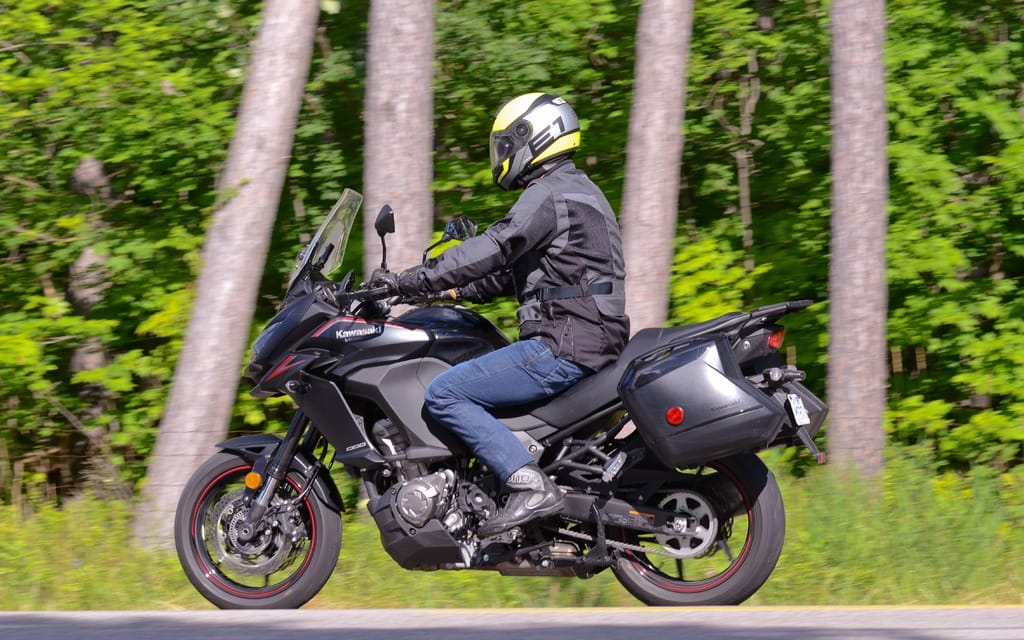 If we had to choose, we wouldn’t
What was originally a less-than-renowned poet’s description of an even more obscure painter’s painting style has morphed into a pop aphorism that expresses the complexities of modern living. In three short syllables, Robert Browning’s lauding of Andrea del Sarto’s minimalist flourishes — “to paint a little thing like that you smeared” — captures our exasperation at having too much information from too many sources all exhorting us to different conclusions. No wonder we worship a seemingly simplistic epigram that proposes simplicity’s triumph over complexity, brevity over verbosity and, as a result of the rebellion against the rampant consumerism of the last half of the 20th century, possessions not nearly as precious as time. Less is more has morphed from trite proverb to modern maxim as a guideline to living with, well, less.

Of course, Browning never rode a motorcycle, and bikers, especially we Boomers, still prefer our steeds writ large, preferring Carroll Shelby’s famed admonition that “too much is never enough.” We like our pistons and we like them large.

Nonetheless, Cycle Canada decided to test Browning’s axiom — that one can have at least as much fun, if not more, with fewer cubic centimetres. So we gathered three distinctly different-sized adventure tourers and ran them through a day of adventuring. And, being the keen scientists we are, we even constrained — that’s just fancy scientific talk for eliminating variables — our experiment by testing only one brand of adventure bikes, namely Kawasaki’s Versys, specifically in all its 300, 650 and 1000 cubic centimetre permutations.

Now, we know nobody actually shops for motorcycles like this. Litre-bike riders wouldn’t be caught dead riding a 300 cc tiddler and Lord help the neophyte who swings a leg over a 160-plus horsepower pseudo dirt bike as their first post-exam ride. But as a learning experience into the current state of motorcycling’s power pyramid, riding three bikes of different displacement in the same segment from the same company was full of surprises.

The first is that small-displacement motorcycles have made enormous strides in recent years. Where the sub-600 cc segment has long been viewed as limited to urban use — neither their power nor their size suitable for high-speed cruising — the Versys 300 is proof that, while not ideal, the modern micro-motorcycle is perfectly capable of serious roadwork.

For one thing, Kawasaki’s take on the 300 is definitely as a full-sized motorcycle. While its 815-millimetre (32-inch) seat height might limit its attraction to the newbies to which small displacement motorcycles are typically marketed, its generous proportions — again, by tiddler standards — mean that even a six-foot rider can find comfort aboard the Versys-X. Indeed, there is much that is “big” about Kawasaki’s littlest adventure bike. Fairing coverage is decent, the suspension not hardly crude and, again, thanks to its big-bike proportions, its seat-peg-handlebar relationship is not cramped. In fact, the little 300’s biggest comfort compromise has nothing to do with its size but rather that Kawasaki has inexplicably blessed it with perhaps the hardest seat in all of motorcycling. Plank-like does not begin to describe the firmness of the Versys 300’s perch. Forty-five minutes was enough to get all of our testers begging for a break. It’s uncomfortable enough that we’d be shopping Corbin or Sargent as soon as we bought the 300.

It’s also worth noting, in the quest for bike features, that the smallest Versys comes with both anti-lock brakes and optional saddlebags. The former work extremely well, though with only one disc up front it’s already pretty hard — damned near impossible, in fact, except in the wet — to lock up. The saddlebags, however, at $561.83, are the one aspect of the X that seems built to a price ($6,149 for the leftover 2017 Versys-X we tested; $6,499 for the 2018 currently on sale). It’s not so much that they are small — their 17-litre capacity probably befits the nature of the bike — but they’re a bit flimsy, and the locks provided are just plain diabolical.

As one might expect, the little engine — all 296 cc of Ninja 300-derived parallel twin — is also a limitation, though not as much as you might think, nor for the reason you might suppose. Although you need to wring the twin’s 39 horsepower to keep up with the bigger bikes, it will cruise all day long at 130 kilometres an hour and, with a little extra planning, pass vehicles with (some) confidence on the highway. The problem is that the stock gearing has the twin spinning like a Ninja Nutri-blender — yes, there is such a thing — on overdrive; 7,500 rpm equates to just 100 kilometres an hour and 120 km/h takes 9,000 revs in top gear. The problem isn’t so much vibrational discomfort as mechanical sympathy. You’re always aware that the engine is working hard at highway speeds. One of the few instances of unanimous agreement among our testers was that a change of sprocket to reduce highway revs would be the first purchase to follow a more humane seat, were we to own a Versys-X, even if it cut its already paltry acceleration somewhat.

Moving up to the Versys 650, power and engine speed is naturally much less of a concern. Although Kawasaki’s mid-sized 649 cc twin is largely unchanged save for some minor fuel injection and exhaust system alterations to make it Euro4 emissions compliant, it’s still a sweetie of an engine with more than adequate low-speed grunt combined with a willingness to rev. Oh, the exhaust note and the rumble through the pegs — there’s a little thrumming felt above 6,000 rpm/125 km/h — is not quite as reassuring as a V-twin’s, but, thanks to copious rubber mounting on everything from the engine mounts to the footpegs and handlebars, the latest generation 650 is smoother than the first.

The rest of the bike, on the other hand, was significantly upgraded in 2016. Compared with the original version, the current Versys has a much-improved seat, suspension and brakes, all welcome improvements to the issues of the previous bike. Even the fairing/windscreen is vastly improved. The fuller fairing and the larger windshield — straight off the Versys 1000; Kawasaki says it’s 1.7 times larger than the previous version — offer decidedly more coverage though turbulence has increased somewhat from the previous model. That said, the 650’s latest windshield is easily adjustable and actually buffets helmets less than the Versys 1000, mostly because its seating position places it a little closer to the windscreen than on the litre bike. On the fully loaded LT model tested that comes complete with handguards, the protection from wind — and, more importantly, rain — is pretty complete.

The addition of the saddlebags, however, is what makes the LT truly touring capable. Spacious at 28 litres apiece, they are also ultra-convenient, using the ignition key for locking and unlocking the easily manipulated Givi-like clasps. This is essentially the same luggage used on the Versys 1000 LT, so the 650 is punching — or cargo-ing — above its weight. Kawasaki Canada also offers convenient saddlebag liners for $154.21, and a 47-litre topcase for $366.93 (add $107.59 if you want to include the backrest pad to keep your passenger happy).

Speaking of cargo, the 650, as I mentioned, can now better accommodate varying load conditions, offering both preload and damping adjustments on the front fork and rear monoshock. Said rear suspension’s preload adjuster is a remote hydraulic unit so changes are made easily, while the front fork uses a unique arrangement whereby the spring is in one fork leg and the damping in the other. Adjustments to preload and damping are therefore accomplished on alternate fork caps, keeping the whole process simple.

Handling is fleet as befitting its light 216-kilogram curb weight, the 650 LT ($9,899 for the 2017 model; $10,199 for the ’18) bending into curves with just the slightest tug of the handlebar. Dynamically, the most impressive thing about the mid-sized Versys is how neutrally it steers: In this age of wide-tired superbikes that require hanging off at every corner, a lithe adventure bike that steers into corners so easily is welcome. The compromise for this steering neutrality is that the 650 wears a 17-inch front tire (120/70ZR17 to be exact), pretty much putting paid to any pretention on the Versys 650’s part to off?road worthiness.

The same applies to the 1000 cc version of the LT. With the same 120/70R17 front tire (though with a larger, litre bike-appropriate 180/55R17 rear), the Versys 1000 is not going to challenge the Africa Twin to a mud bog duel. But it does offer the same “everyman” utility the 650 does, albeit with double the number of pistons and almost twice as much power.

Oddly enough, despite its 1,043 cc, Ninja 1000-derived engine, it seems that it is horsepower or rather, a lack thereof, that proves to be the Versys 1000’s Achilles heel. With big-bore adventure tourers now claiming 160-plus horsepower — Ducati’s Multistrada, BMW’s S1000XR and, of course, the KTM 1290 — the Kwacker’s 125 or so horses are somehow considered deficient. Even one of our testers — who shall remain nameless although his name rhymes with Paul — claimed the 1000’s 110 or so horsepower at the rear wheel was not enough, its refusal for 3,000 rpm, fifth-gear wheelies seemingly not in keeping with what he was looking for in a sport/adventure tourer.

That condemnation stipulated — and, seriously, when did an 11-second quarter mile for something with saddlebags become slow — the Versys 1000 has much to laud. Being rubber mounted, the engine is far smoother than other four-cylinder Ninjas. Ditto the three-cylinder Yamaha FJ-09 to which it is so often compared. Said engine is also so torquey that, unless, uhm, Paul is, again, trying to pop wheelies, the 10,000 rpm redline seems largely academic. In complete contrast to the 300 Versys, the 1000 LT is geared quite tall for a four — 5,000 rpm working out to around 130 km/h.

Everything about the biggest Kawasaki is relaxed, from the light-effort, assisted clutch to the six-speed transmission that shifts like a hot knife through proverbial butter. Even the 1000’s neutral handling is light and easy, impressive for a bike that weighs 249 kg (548 pounds) and rides on a 1,520 mm (59.8-inch) wheelbase.

Perhaps the best thing about the biggest Versys is how unthreatening it is to ride. For some — that would include your author — its lack of electronically variable suspension, cruise control and busy digital dashboard, not to mention a striking dearth of overwrought switchgear, offers a striking counterpoint to the complication that is the modern Ducati or BMW adventure tourer. For others, its lack of high-tech gadgetry, the 30-plus horsepower deficit to the hot rods of the segment and, to be perfectly honest, its ho-hum styling, is enough to take the big Kawasaki off their shopping list. The Versys 1000 LT is comfortable, practical and, at $15,299 (for the 2018 model; $14,999 for the 2017 we tested) affordable. In the end, not everyone will find it compelling, but all should find it competent.

And, finally, this is what we learned from testing three different displacement motorcycles. First, size still matters, but not nearly as much as it used to. The Versys-X is one of the new generation of budget bikes — the others that come to mind are BMW’s G310 series and the KTM 390s — that offer (almost) big-bike features and accommodations. Also obvious is that, when it comes to adventure bikes specifically, light weight does have its advantages. The reason the X was the only Versys we dared use off-road has less to do with its 19-inch front wheel (the larger two, again, rode on sportbike-like 17-inchers) and everything to do with its 175 kg (385 lb) curb weight, a whopping 74 kg (162 lb) less than the 1000.

As for where the three Kawasakis compare with their direct competitors, the 300 stands atop its segment, by far the most “motorcycle” in the 300 segment. The 650 is equally competent — and much improved over the original — but faces stiff competition from the evergreen Suzuki V-Strom 650. As for the 1000 LT, it is (undeservedly) overshadowed by more powerful and more feature-festooned competitors. For those looking for practicality and simplicity, however, it’s a sweetheart of a bike. It’d be at the top of my shopping list if I was looking for a 1,000 cc adventure tourer.