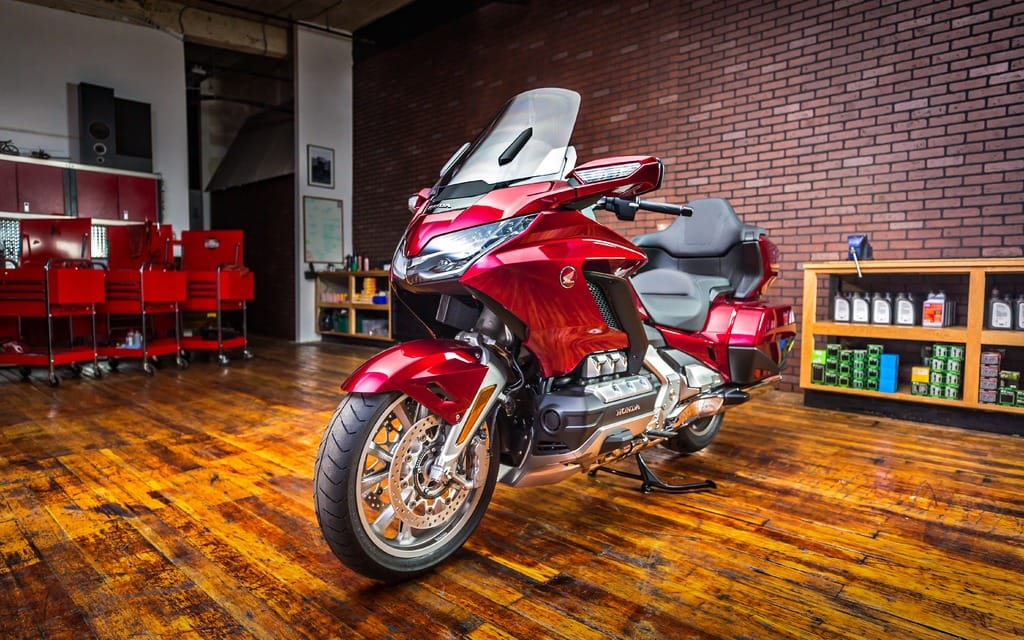 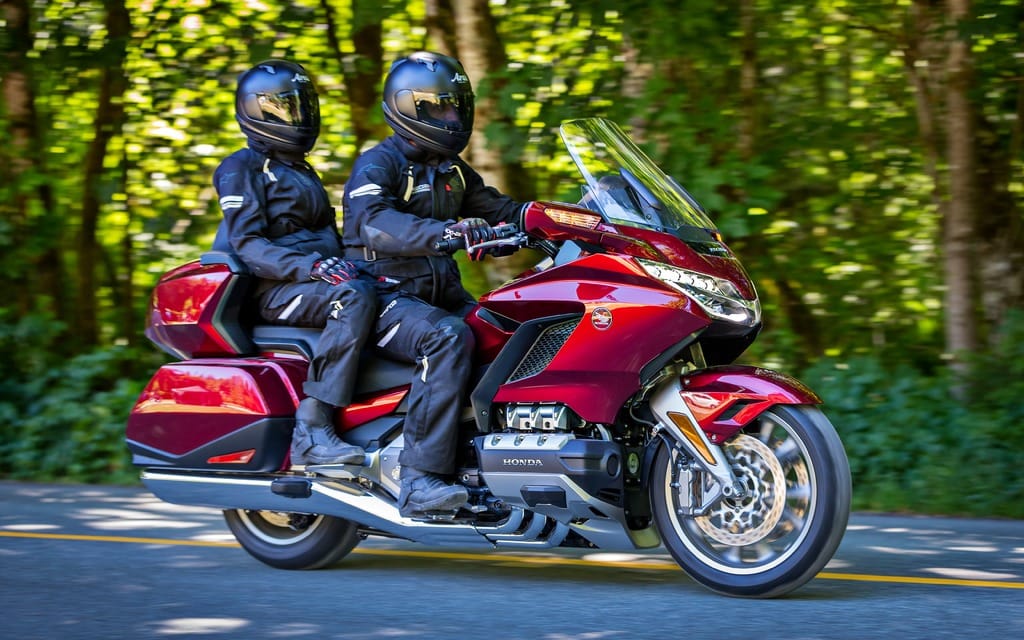 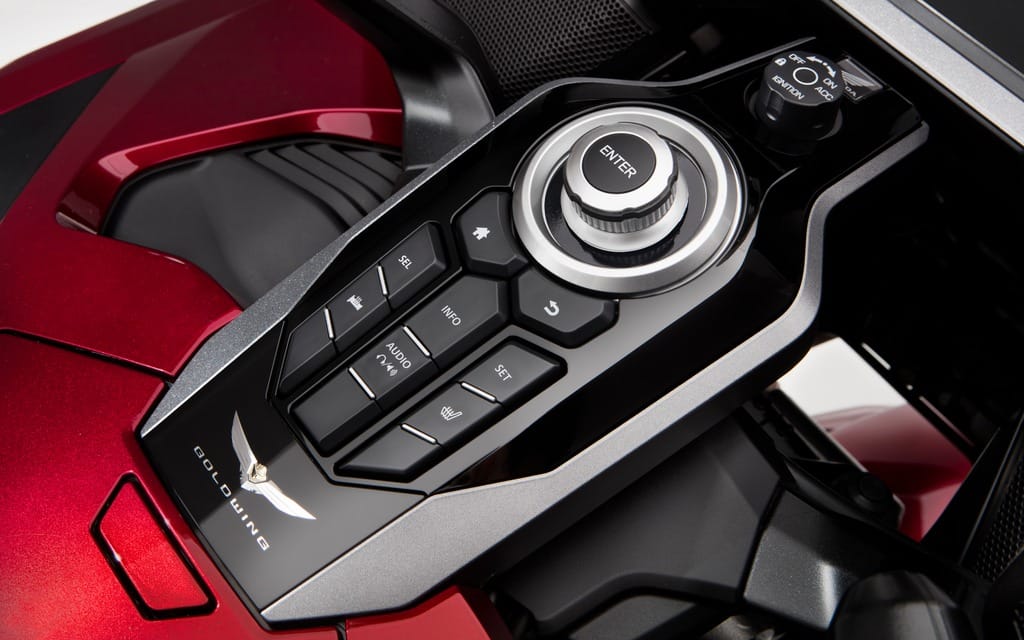 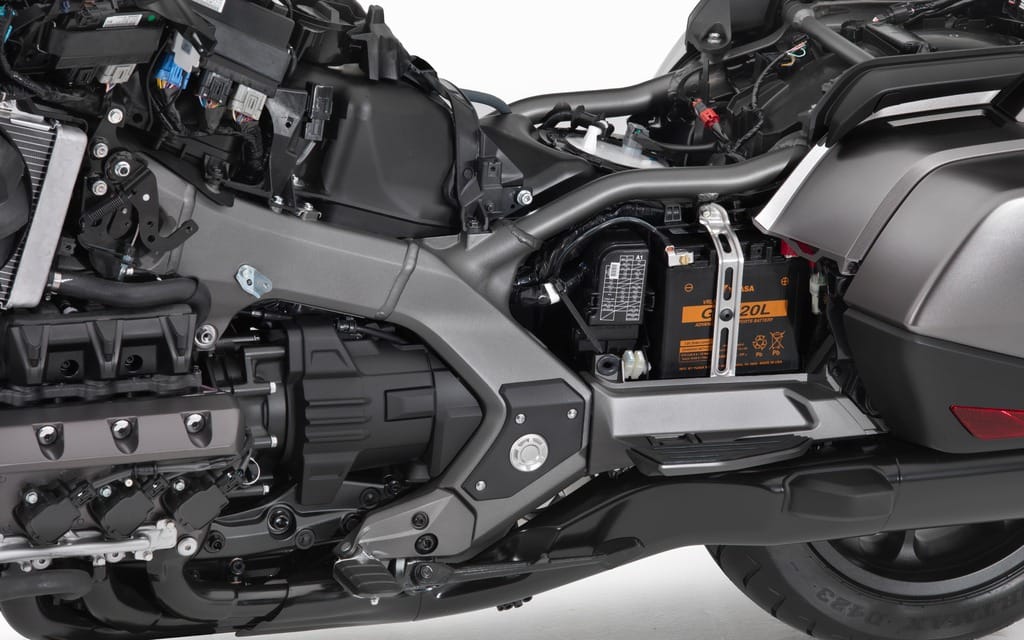 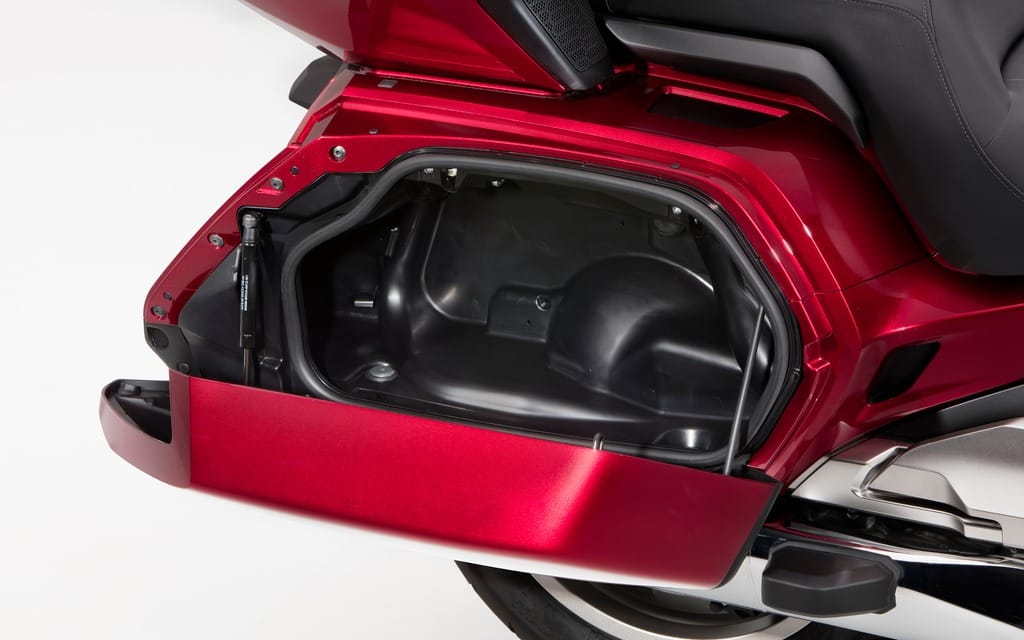 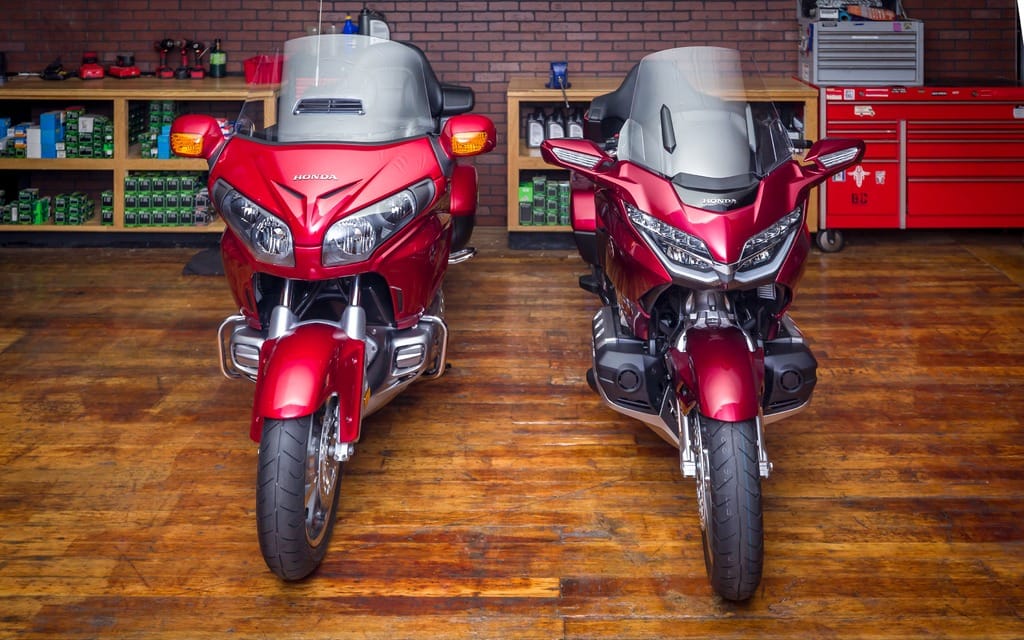 2018 Honda Gold Wing shrinks to give more to the rider
As much as the blogosphere has been all agog on what new technologies the 2018 Gold Wing will feature — and, yes, those do include a Hossack-type front suspension and a DCT transmission — it’s the new Wing’s (comparatively) diminutive size that is the true revelation. Indeed, photos — even these official shots — don’t do the Wing’s diet program justice, the overall impression in person is of a 9/10 scale Gold Wing, the shape familiar, but the dimensions dramatically reduced. The fairing, a bulbous affair on the previous model, is decidedly more svelte, decidedly narrower, and even the windscreen not as beanstalk tall. Indeed, everything about the new Gold Wing seems, well, tighter.

It’s also lighter, more than 36 kilograms lighter, in fact, than the previous generation. That’s an impressive statistic all by itself, but try this on for context. The mid-level Gold Wing Tour (with the high-tech DCT Transmission) weighs 379 kilograms: by comparison, Yamaha’s new Star Venture TC breaks the scale at a whopping 438 kilos. Yes, the Gold Wing with its six-cylinder water-cooled engine is some 140 pounds lighter than its twin-cylinder, air-cooled competition. Incredible!

All that weight saving doesn’t come easy, says Colin Miller, a Honda tech spokesman, noting that every single subsystem has been re-engineered for lighter weight. So, while it’s impressive that the engine itself shed four kilograms and the chassis another six, what Miller is most proud of is that the Gold Wing no longer has a (heavy) starter motor. Instead there’s a starter/generator — essentially the technology used in high-tech automotive hybrids — that acts as both starting motor and alternator. Numerous such combinations of various electronics functions all add up, piece-by-piece, says Miller, for that nearly 80-pound weight loss.

Even more impressive is the bike’s svelte silhouette. It’s smaller in every dimension — and most impressively in width of the fairing — and Miller notes that despite the smaller frontal area wind protection the new Wing’s wind diverting ability is superior to the old Wing’s. Essentially what Honda has done is place the rider some — and this is just a guess — 75 millimetres closer to the fairing, which means the onrushing air has less room in which to curl over the windscreen and throw turbulence onto the rider and passenger.

That’s basic aerodynamics. How they got the rider closer to the fairing, well that, as they say, is the trick. First, the Gold Wing’s trademark opposed six was shortened by 29 mm — in part by using a slightly narrower bore — so that the rider’s feet could be moved forward.

More subtle is advantages of the front suspension. Of course, the Hossack-style double wishbone system is known for its superior performance, greater rigidity and reduced dive during braking. Less apparent, though, is that, when the Hossack does respond to bumps, the front wheel rises almost vertically; conversely, a front telescopic fork moves the front wheel backwards as well as up. Because the new Wing no longer has to contend with the front wheel hitting the bodywork under full deflection, the engine can be moved forward and the rider is again closer to the front fairing. Look at the forward-facing pictures of the two generations of Gold Wings side by side and marvel at how much narrower Honda’s engineers have been able to make the 2018 model without sacrificing, they swear, one little bit of aerodynamic comfort.

Of course there’s lots more to the new Gold Wing than just reduced weight. That smaller engine now features four valves per cylinder. Banish thoughts of gargantuan increases in power, however. Honda claims about five percent more maximum top-end horsepower, but the mid-range is almost identical to the outgoing model’s. Any significant increase in performance will come from the aforementioned weight loss, not from more power.

More noticeable is the inclusion of Honda’s Dual Clutch Transmission on the new Gold Wing. Now with seven speeds, its operation remains similar to the operation of the Africa Twin’s DCT. In automatic mode, it shifts through the gears itself; in manual mode, a couple of handlebar-mounted flippers manage the gear selection process. The big difference is that DCT-equipped Wings include a reverse gear that will let you crawl backwards at 1.2 kilometres an hour. It even — because the demographic for big tourers is rapidly aging — will creep forward (at 1.8 km/h) to allow easier back-and-forth parking. This is all accomplished through the DCT using the engine for power. Manual transmission models will reverse — but not creep forward — and use the electric starter/generator for motivation.

There’s also plenty of new high-tech features. Besides the expected ABS, there are four riding modes — Tour, Sport, Econ, and Rain — which, on the higher end models, also adjust suspension damping front and rear. Separately there’s an electronic rear spring adjustor, allowing you to choose from multiple rear preload settings from single rider with no luggage to two riders with full luggage. Higher end models also get traction control — Honda’s Selectable Torque Control — and there’s even a Hill Start Assist system for when you’re taking off up a steep incline.

There’s a new telematics system with fancy automotive-style rotary twiddle knob that provides access to the options on the new seven-inch TFT screen. Apple CarPlay is available; Android Auto is not, but plans are afoot to incorporate it. Additionally, there’s a keyless entry system that automatically locks the bike — and saddlebags — when you walk away.

Indeed, there’s much more to the new Gold Wing than we have space for here. What you need to know is that the motorcycle that started motorcycling’s touring revolution way back in 1975 is back on top and will be in dealerships by early spring.

There’s also been something of a rebranding of the Wing. The basic Gold Wing (what we know now as the F6B) starts at $26,999 while the Gold Wing Tour (the one you think of as a Gold Wing) retails, in its base guise, for $30,799 and touches $34,600 for the all-singing all-dancing model with DCT and air bag.