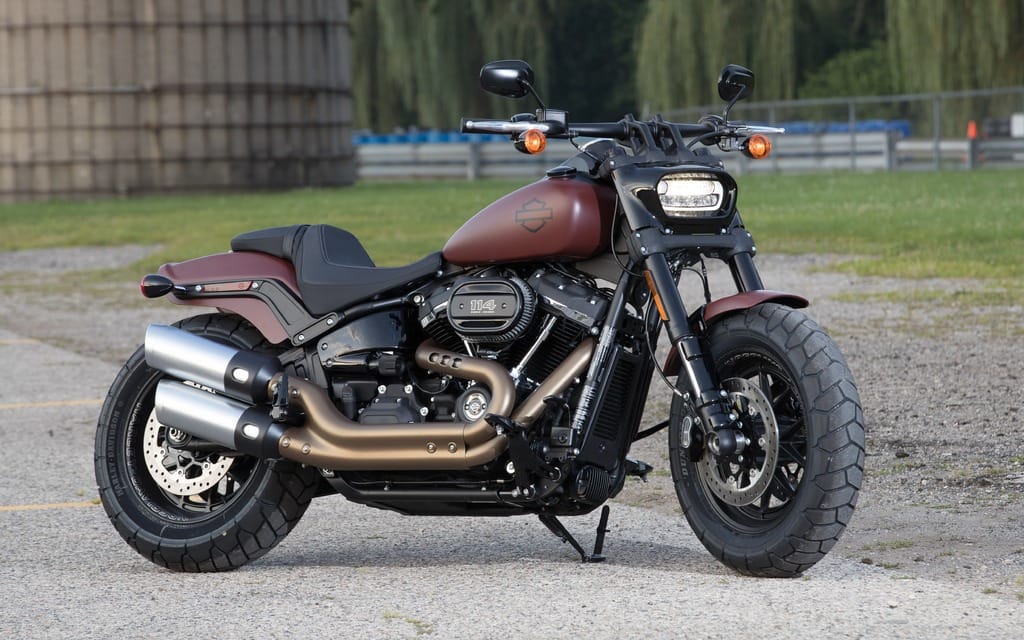 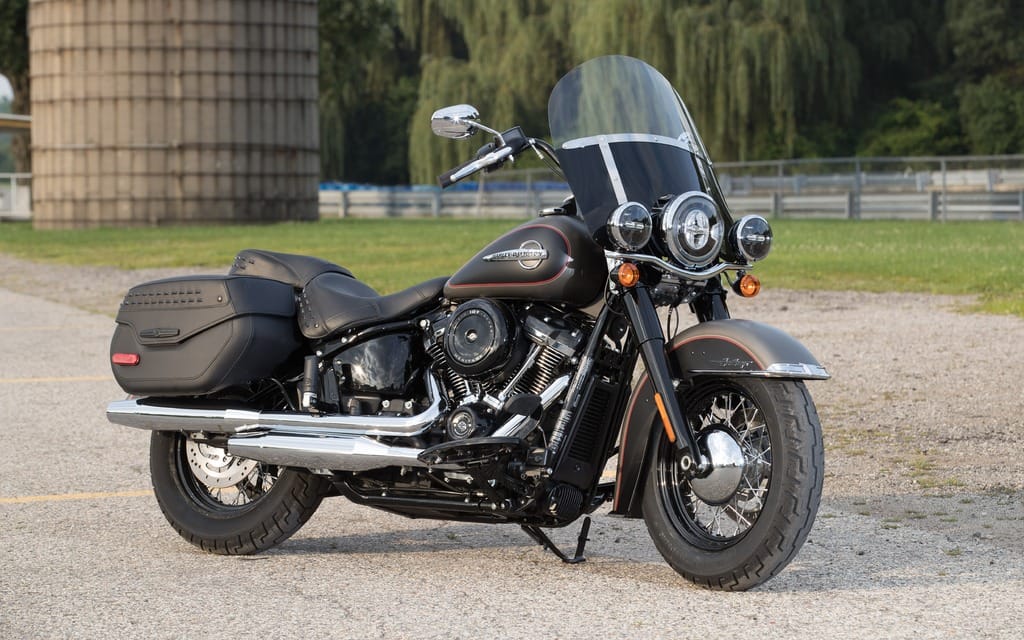 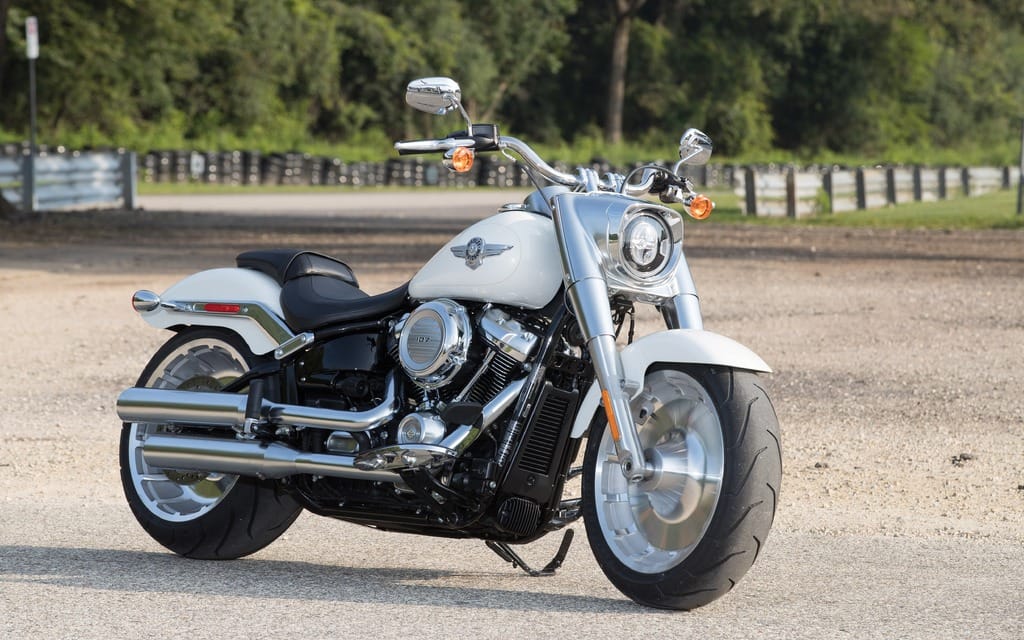 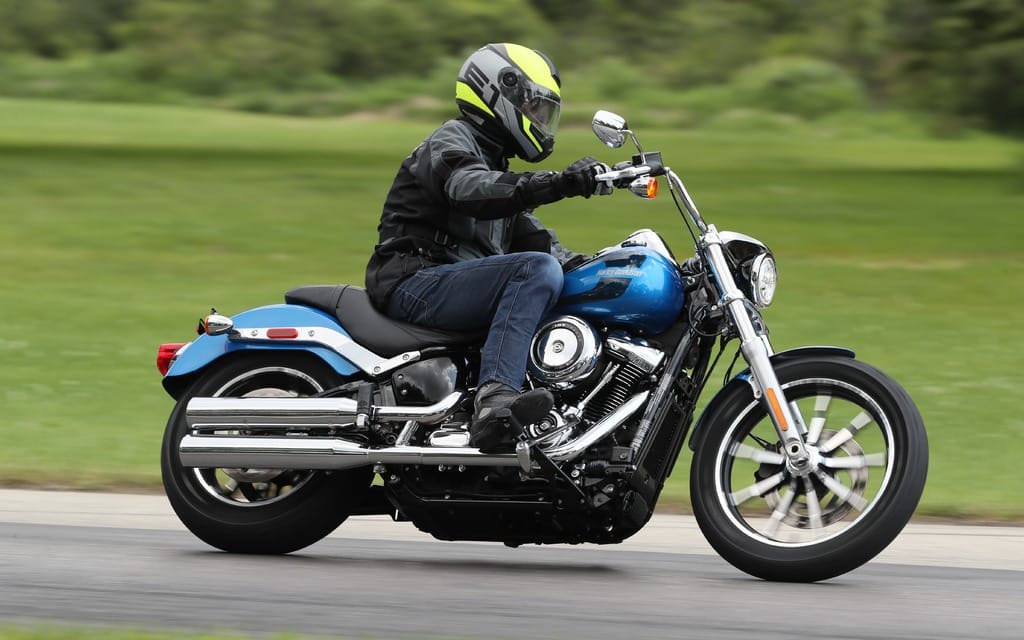 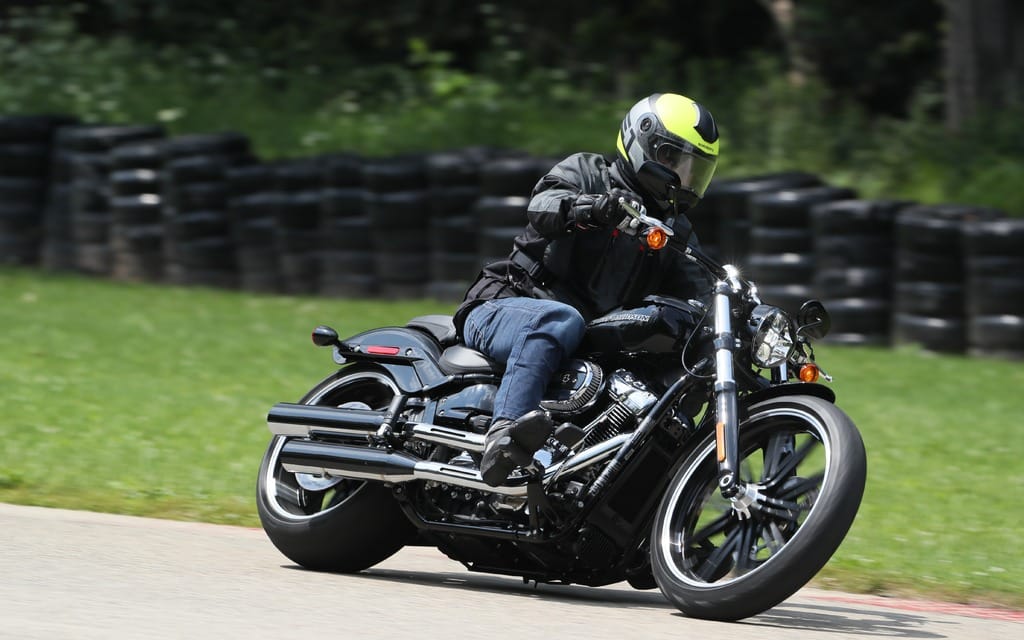 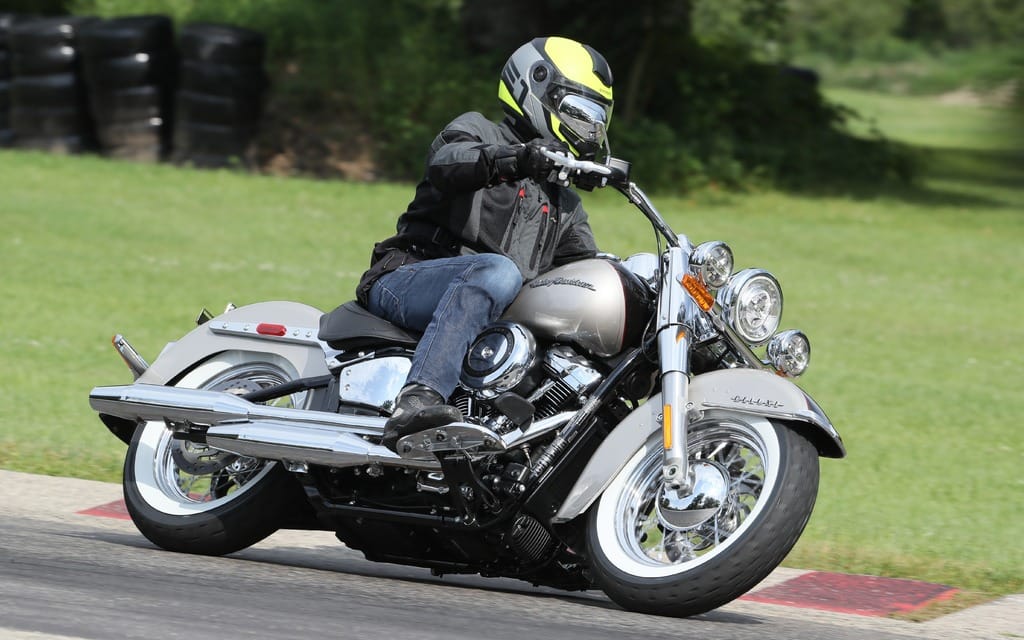 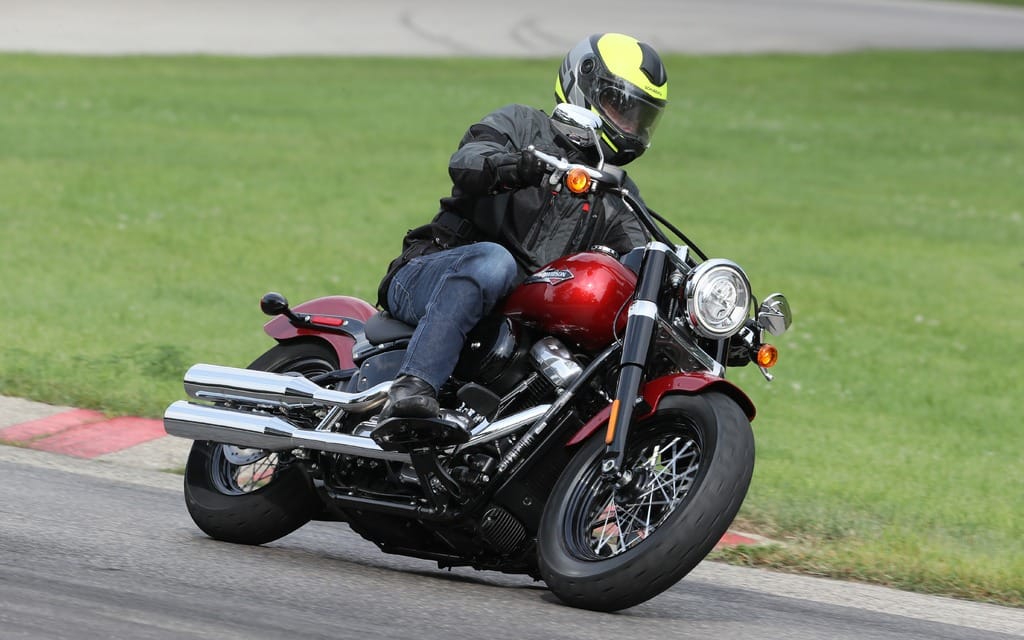 Harley-Davidson turns its products into motorcycles
I’m riding around Blackhawk Farms Raceway, a sinewy little ribbon of a racetrack an hour southwest of Milwaukee. It’s a club track, not unlike Ontario’s own Shannonville Motorsport Park, a long-in-the-tooth piece of tarmac that rewards sharp handling, accommodating suspension and a lotta lean angle ’cause some of the corners are off camber. Oh, and big brakes because each of its two long straights is punctuated by a diabolically tight hairpin. A perfect track for a light 600 supersport; make mine a 675 cc Triumph Daytona, please and thank you, for its sharp handling and torquey jump off tight apexes. In a pinch, a big single might do, again emphasis on the hell-for-strong brakes and enough ground clearance to get Marc Marquez excited. Not a litre bike though; that’s just too much motorcycle. Not even a 750, come to think of it. That’s how tight Blackhawk is.

So why the hell am I trying to clip its red and white curbing on a Harley-Davidson Softail Slim? Yes, a Harley Softail. Yes, a Slim. Yes, yet again, a racetrack.

Softail and racetrack are words not commonly used in the same sentence — unless, of course, to disparage its complete unsuitability thereof — and most certainly not the Slim, the most ground-clearance-challenged of any of Harley’s ground-clearance-challenged cruisers. Yet here I am pushing a Slim through Blackstone’s long sweepers wondering when the damned floorboards are going to start grounding. It’s my second lap in and the floorboards are not yet sparking. I’m starting to get paranoid, thinking I’m not doing something right — not going fast enough, taking the wrong line, something — because the darned thing just isn’t doing the scrape-wiggle-scrape-wiggle thing that happens every time you normally bend a Softail Slim over more than a few degrees.

And, a few laps later, damned if the Deluxe, another Softail variant known for showering sparks at every apex, is proving almost as reluctant to trade hardware with tarmac. Oh, to be sure, eventually the floorboards do make contact with terra firma but that’s only after I start riding it like, well, a motorcycle. And just to compound my confusion, the Deluxe’s suspension isn’t bottoming out over that big bump in Corner Three. WTF?

Though the hyperbole may be a little over-the-top — yes, both the Slim’s and the Deluxe’s floorboards were severely tested — what we were witnessing is probably the largest wholesale model shift in Harley-Davidson’s recent history. For one thing, there are no more Dynas, all the models that used to be on that chassis having been rolled into the Softail platform, which, as you might have guessed from my only slightly exaggerated commentary above, is vastly improved.

First and foremost, the you-say-pull-we-say-push underslung dampers of Softails previous are history, having been replaced by something called the Da Vinci (at least that what it was called when I snuck a peek at some internal documents I wasn’t supposed to be looking at) chassis, which is essentially a large single-tube spine frame mated to a monoshock rear damper. Now, neither of those is really revolutionary — Egli popularized the spine frame concept in recent years (though his were round and Harley’s are square) and Milwaukee’s monoshock looks like it could have been purloined from any number of late ’70s motocrossers — but that doesn’t make them any less effective.
The devil — or, in this case, the chassis rigidity — is in the details. For instance, Ben Wright, the Softail’s chief engineer, says that by getting the suspension geometry just right — the rear shock is directly in line with the frame’s upper rail — load on the upper frame is minimized, allowing engineers to make the upper stanchion significantly lighter, contributing to Harley’s claim that the new Softail’s frame is about seven kilograms lighter than the previous version while being 35 percent stiffer. Furthermore, says Wright, by boxing the upper frame rail, Harley was able to locate much — actually, most — of the electric wiring and cables inside the frame for that “clean” cable-less look that custom builders are always claiming takes thousands of dollars to perfect (a neat side benefit of which is that, because all the wiring is now in the upper frame rail, there’s a USB power port right where the steering lock used to be).

It also — and, yes, this is often a secondary consideration for Harley owners — modernizes the suspension. Now operating in traditional compression — in case you didn’t get the previous you-pull-we-push reference, the underslung system worked in extension — the rear shock’s spring now compresses under load and is now more easily adjustable for preload.

Just how much more easily, depends on the model. On models where space is at premium and stylistic concerns rule out an external adjuster — the Slim ($19,499), Street Bob ($17,999) and the new Low Rider ($18,999) — one needs to remove the seat and attack the rear shock with a traditional suspension spanner. Models not so cramped — Heritage Classic ($22,999) and Deluxe ($22,499) — get a hydraulic preload adjuster, still under the seat, but not requiring nearly as much muscle or finesse to adjust. And the sportier versions of the new Softail line — the Fat Bob ($21,299), Fat Boy ($22,999) and the Breakout ($22,999) — get a, shades of modernity, external hydraulic adjuster similar to premium adventure and sport touring bikes.

There are even two different length shocks — not interchangeable between models, mind you — with different strokes. So, while the cruising oriented models make do with 86.4 millimetres of travel, the truly sporting and touring-oriented versions — basically the Fat Bob and Heritage Classic — see their rear wheels working through a 112.8 mm stroke. Rounding off the suspension upgrades is the Showa Dual Bending Valve front fork first seen on last year’s touring models.

OK, that’s the chassis, but as you might have expected, as part of 2018’s refresh, all the new Softails will now be powered by Harley’s new Milwaukee-Eight V-twin. Essentially a four-valve upgrade to the venerable 45-degree V-twin, the 107 cubic inch (1,746 cc) versions power the Slim, Deluxe, Street Bob and Low Rider while the Heritage, Breakout, Fat Bob and Fat Boy are available with either the 107 or 114 cubic inch (1,868 cubic centimetres) mill. However, all Softail Milwaukee-Eights, unlike Harley’s rubber-mounted touring models, get a second balancing shaft since the engines are rigidly mounted.

For the record, even though the new motors are significantly more powerful than the previous versions — resulting in acceleration as much as 10 percent faster than the old Twin Cam 103 models, says Harley — the emphasis is still on torque, the 107 producing just 78 horsepower and the larger 114 about 82 or so ponies at the rear wheel. It is worth noting, however, that, armed with enough dollars and a willing dealer, you can order up to four various iterations of Screamin’ Eagle goodness with the Stage IV — cams, throttle bodies, bigger pistons and ported cylinder head — massaging 120 horsepower out of the 107 (which gets punched out to 114 cubic inches in the process) and 122 ponies (again, rear wheel) from the 114 (which grows to 117 cubes). And yes, they are fully emissions compliant (you might remember Harley got in a little trouble earlier this year with the compliance of some earlier Screamin Eagle kits). We’ll hopefully be testing one of the full-zoot Stage 4s soon.

Horsepower infusion or not, the motors are not the primary focus of the 2018’s rejuvenation. And as I mentioned, both Slim and Deluxe are much improved in the comportment department. Cynics will have a point that a) both were starting from a pretty low baseline, and, b) the handling improvements I’m trumpeting really only bring them up to normal biking standards. Nonetheless, Harley haters now have one less thing to carp about and anyone who was on the fence about purchasing either because of their dynamic limitations now has their qualms settled.

As much as both have improved, however, the most noticeable difference is the rejuvenated Heritage Classic. What before paid but lip service to serious touring — the suspension compliance was average, it responded poorly to being tasked with passengers and cargo and its saddlebags were prone to leaking — is now a serious contender to the Road King as the best overall “sport-touring” bike in Harley’s cruiser lineup. The 107 Milwaukee-Eight has plenty of torque, even two up, the new suspension — extended travel version of the monoshock in the rear and Bending Valve Showa in front — is now compliant, the saddlebags are now lockable as well as completely weatherproof and, thanks to that hydraulic preload adjuster I mentioned earlier, you can now pack them to the gunwales. Pump it up to 114 cubic inches and the Heritage even has some serious jam, especially, again, compared with the Road King which is some 50 kilograms heavier.

Although the Softails had the most to gain from a suspension upgrade, the former Dyna models also see some improvement. Even the Street Bob — “mini-ape” handlebar and all — can be hustled around corners with something approaching dispatch. Again, it takes some getting used to, leaning a Harley with apehangers without grinding footpegs to shards. Ditto for the other cruisers like the Low Rider though their improvements are less.

As significant as the engineering alterations to the Softail cruisers are, it is the sporty Fat Bob that sees the most dramatic visual revision. What was once a Low Rider-cum-Street Rod now sports a truly sportbike stance. The previous model’s traditional side pipes have been swapped for a 2-1-2 header feeding a pair of half-an-Akropovic stubbies. Even the riding position is kinda, sorta sporty (at least by Harley-Davidson standards). And with the upgraded suspension — in the rear, the longer 112.8 mm travel version of the monoshock and, in the front, a cartridge-based inverted fork — mated to the tightest steering angle of all the new Softails — 28 degrees — the Fat Bob has some (semi) legitimate sporting abilities.

Those bona fides are, however, somewhat spoiled by Harley’s traditional devotion to styling uber alles, the fly in the ointment being that, for 2018, Harley swapped out the old 130/90-16 front tire for a humungous 150/80-16 Dunlop D429. As aggressive as it looks — and it does look bitchin’ — it ruins the steering: What was, in last year’s model, perfectly linear steering now wants to constantly understeer, the rider always having to force the 2018 version to hold its line through fast corners. In the end, the new 2018 Fat Bob may be sportier than the old, but it’s now higher effort.

Harley pulled the same trick with the Fat Boy, coupling what, for all the world, looks like a rear tire, to the front forks. Indeed, the new Fat Boy’s 160/60R18 front is bigger than the Slim’s rear rubber. Like the Fat Bob, the Fat Boy’s oversized Michelin Scorcher II does nothing for the steering, but, unlike the Fat Bob, no one is likely to care. What matters much more is that the new Fat Boy is Harley’s best styling work in almost a decade.

And, in the end, that remains Milwaukee’s real priority. As much as Mr. Wright may trumpet the Softails’ improved frames, suspension and motors, the truly devoted’s main concern is their looks. The main contribution of the upgrades, therefore, is to give punters sitting on the fence less reason not to buy Harley’s most important commodity — style.