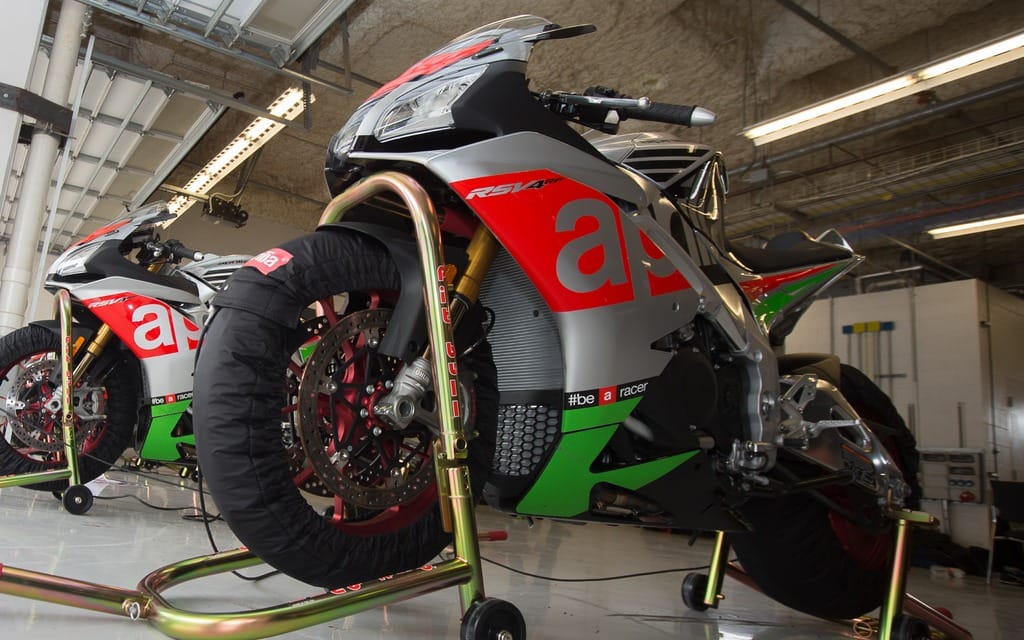 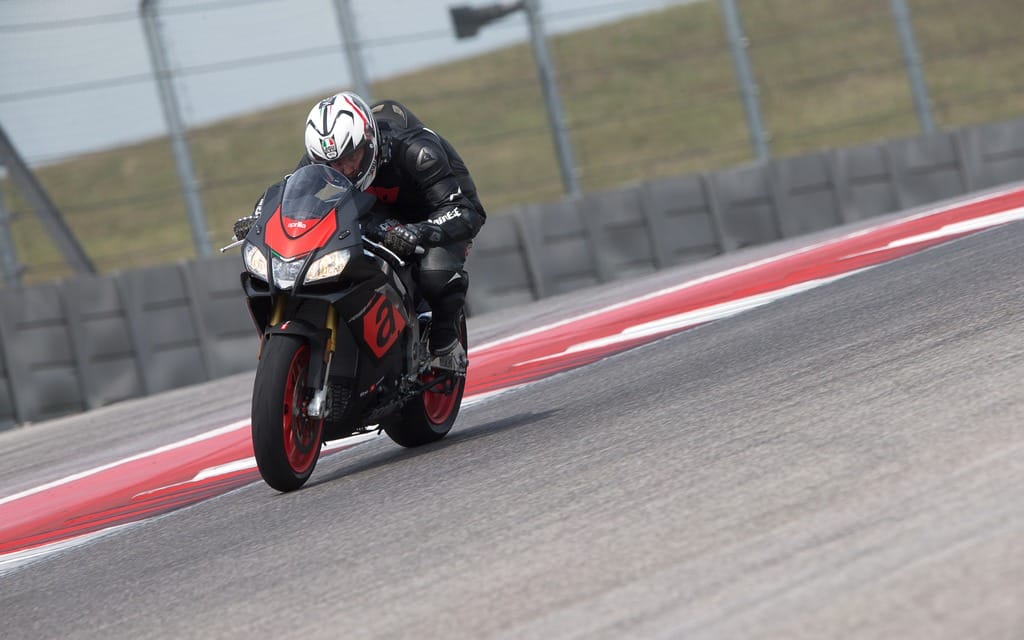 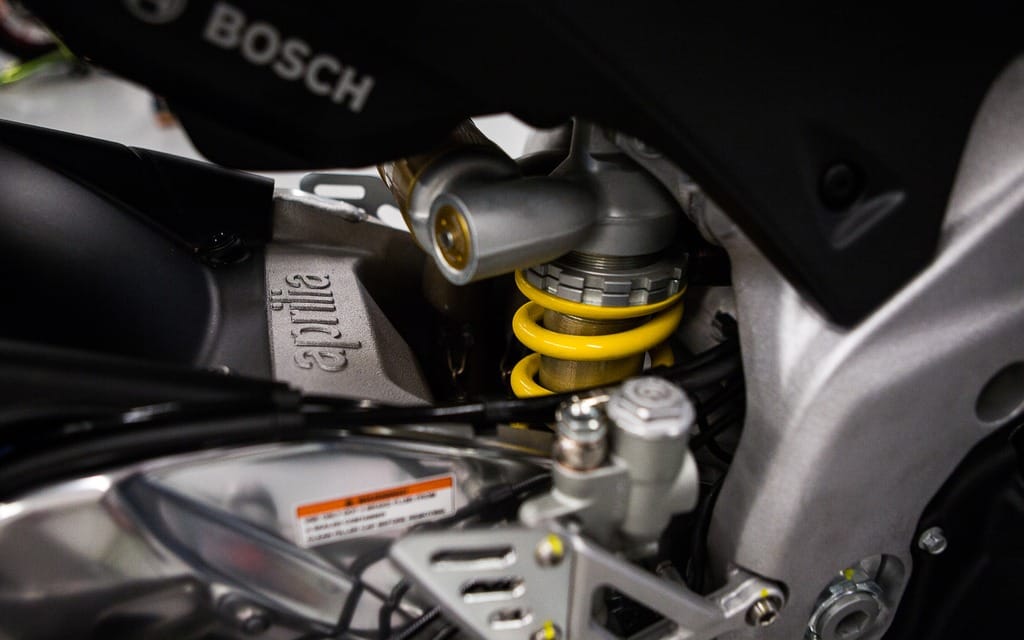 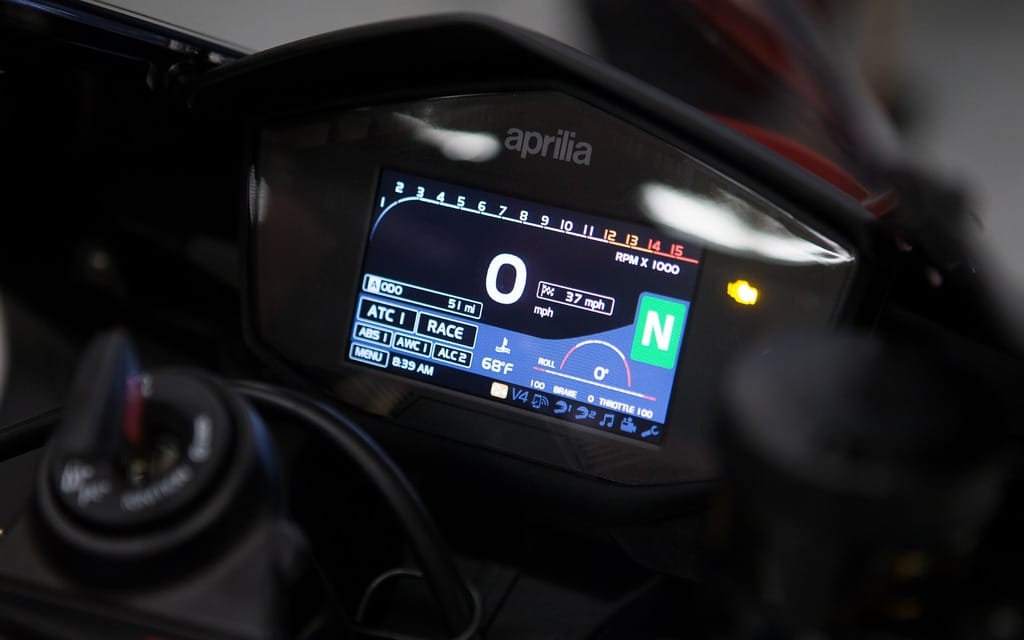 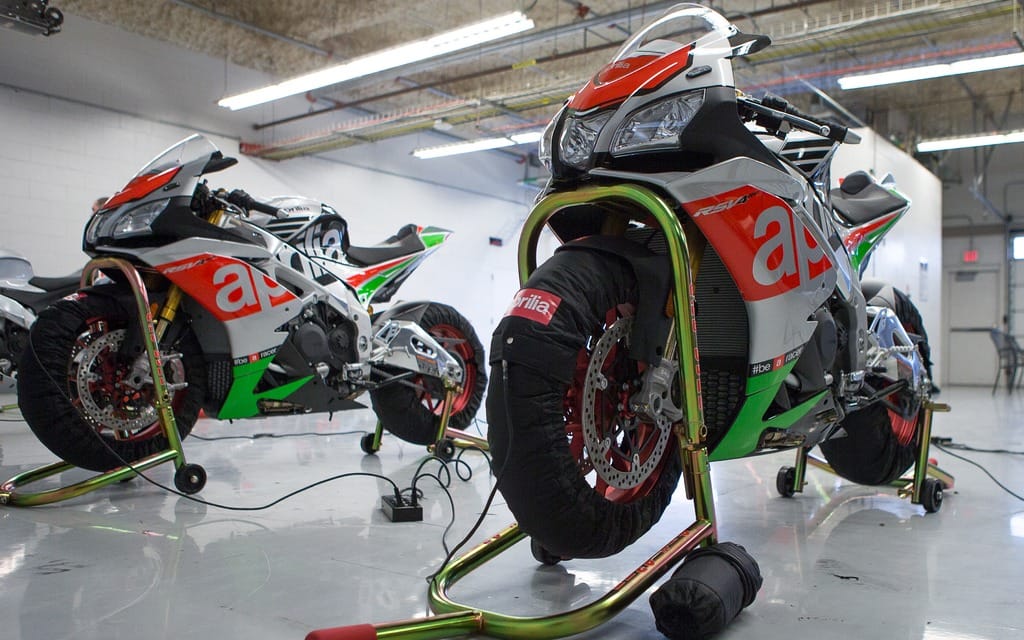 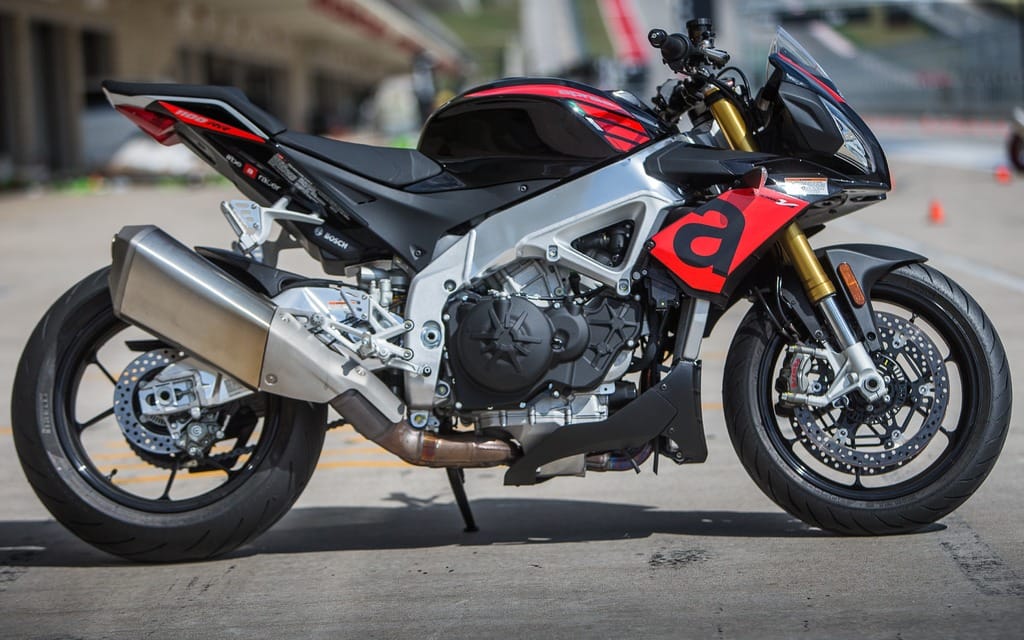 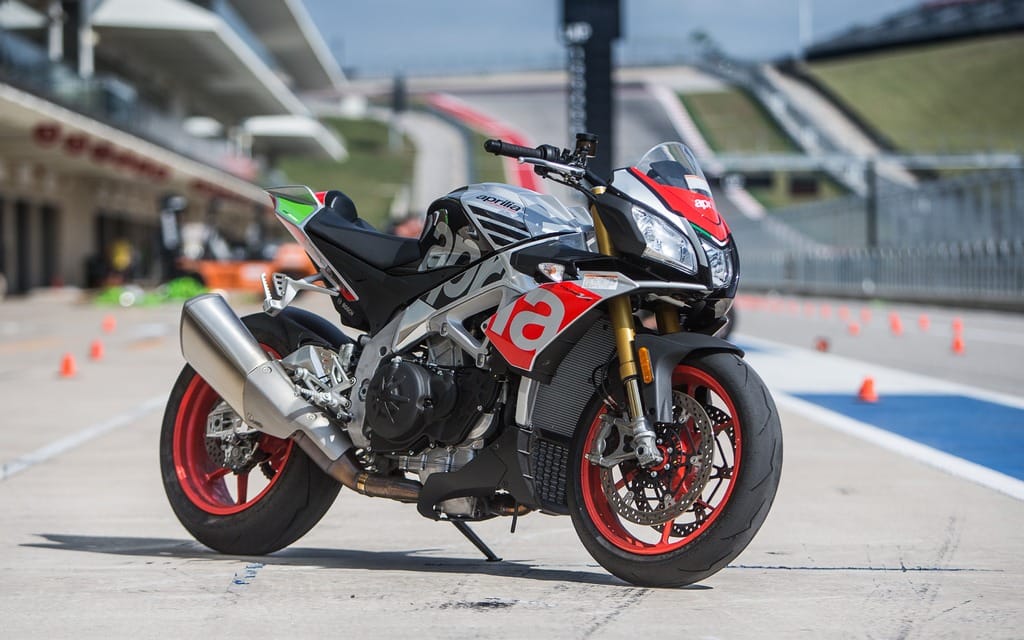 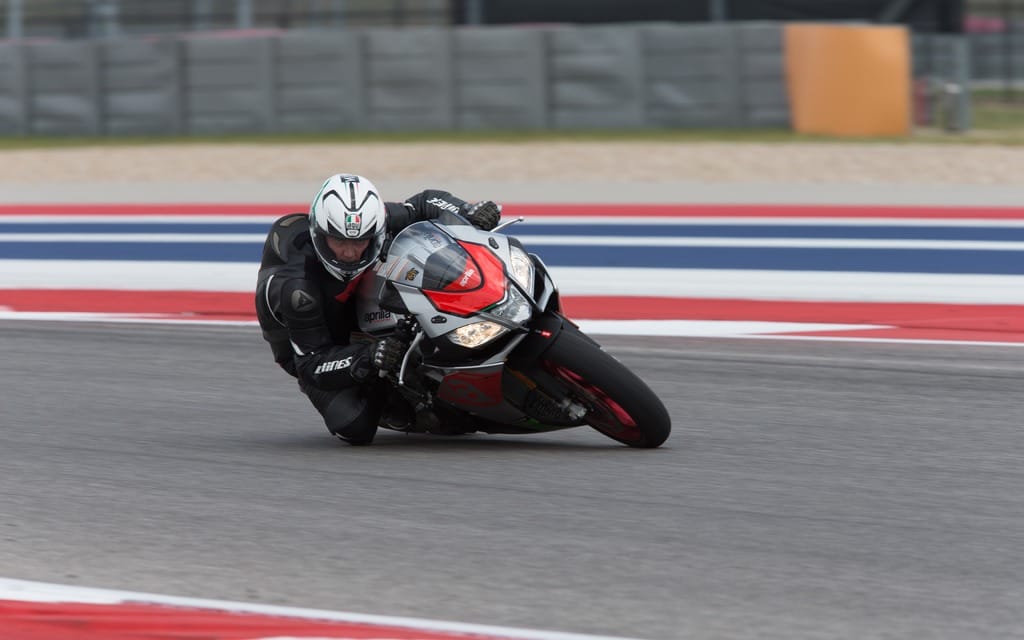 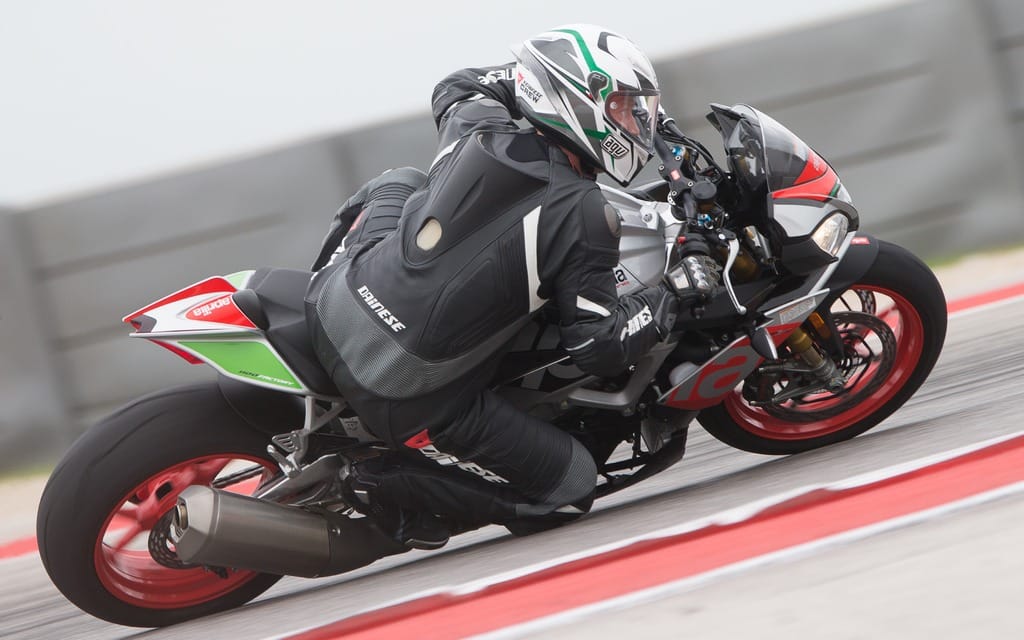 Aprilia superbikes are electrifying
Aprilia wants to make us racing champions. At least that’s what I was telling myself when I arrived in the pits at Circuit of the Americas race track for the launch of the April RSV4 RR and RF. Not only did we have the chance to be invited to this launch but in addition we were entitled to mechanics who could warm the tires before each 15-minute session and advise us on how to use the different power modes and settings of these bikes.

After a short presentation of the new motorcycles and of the circuit they gave the signal to put on our leather suits and prepare for a good dose of adrenalin. Leaving the pits on the RF, I immediately could see the braking skid marks left by Vale and his fellow MotoGP racers that rode here two days before us. I had a feeling of excitement mixed with apprehension as this circuit is reputed as a rather technical and fast track. My first feeling though was to be in awe of the beauty of the circuit and its surroundings. It really is impressive and it took me a few laps to succeed at concentrating my thoughts on the track and my riding rather than looking all around.

When I succeeded at focusing on the circuit, I went in stages to memorize this circuit. Getting out of the pits we approach a big climb before setting the bike for a hard left that leads us to a long dive into turns 2 and 3 before entering the tricky esses that were surprisingly challenging to nail at every pass, giving us the chance to test the manoeuvrability of the motorcycles. Then comes a sharp uphill turn to the right followed by another long dive left leading onto a short straight ending at a hairpin that forces the pilot to downshift quickly from fifth to first gear. A good place to test that new auto downshift.

Then we lock onto the longest straight of the circuit, allowing me to go from 50 to 270 km/h for a couple of seconds before hitting the brakes hard to go back down again to around 70 km/h in 300 feet for another hard left. An excellent section to test the auto upshift, anti-wheelie control, cornering ABS and rear wheel lift control. So much happens in a few seconds!

The last section was a long bend composed of two medium-radius right turns and then two 90-degree turns to get back on the main straight away. Exhilarating!
I first started on the RR. The RR is the lower end version but gets the same electronics package as the RF. They only change Öhlins suspension for Sachs and put on three-spoke cast aluminum wheels instead of five spoke aluminum hubs.

The dynamic control suite is derived directly from the technology used in the world Superbike series. This dynamic control suite offers auto-calibration and wheelie control and includes: ATC (Aprilia Traction Control), AWC (Aprilia Wheelie Control), ALC (Aprilia Launch Control) and AQS (Aprilia Quick Shift). All good things to make you a better rider and improve lap times. All of these gizmos are easily adjustable through new switches and TFT display. One needs to put a little time aside to learn how to navigate through them all but it is relatively easy to toggle from one function to the other.

Although we have seen other brands offer their version of these systems with more seamless integration, both RSV4s are relatively easy to ride fast for the intermediate rider but ask a little more from him or her than some comparable models.

Compared to last year’s version, the Aprilia spokesperson was talking of a one second advantage per tour for these new bikes. The engine has been updated, the electronics, suspension and brakes as well.

The infamous Italian V4 is now Euro 4 approved thanks in part to a new exhaust line. If compared to its predecessor, I can easily say its sound level decreased significantly on the idle as well as at low speeds. However, the vocals of the V4 of this WSBK-developed motorcycle remain atypical and are also easier on your neighbours’ ears when coming back home from your track day.

The first fast lap I managed to do allowed me to appreciate the reactivity of the new electronic accelerator. In track mode, the connection between the ride-by-wire and the rear wheel is seamless. No lag at all between the moment you twist the throttle and the feeling of the bike jumping out of a turn. Such a reactivity, almost on-off, will not displease the experienced pilots but perhaps neophytes will need time to adjust. The dosage of the accelerator is now very accurate, and marks significant progress over the first ride-by-wire Aprilia offered. Switching to the Sport mode I noticed a softer, more progressive response. Whatever the chosen mapping, throttle response always felt good and appropriate.

To adapt its V4 to the Euro 4 standard, Aprilia had to rework many points and design a completely new exhaust line. The muffler is more imposing and now houses a valve that clogs the main duct exclusively on second gear at 5,500 rpm. Gases then have to exit through a much narrower secondary vein. An impact that can be felt coming out of tight turns when passing onto second gear. As the valve reopens the engine starts to breathe better and stretches the arms forcing you to hold on. Thankfully, the bubble (unchanged from last year’s) offers the average size rider good wind protection and the relatively high tank and footpegs put the rider in a true racing position. Good for the track but maybe not as comfortable for the daily commute.

The quick shift system works perfectly and allowed me to concentrate on the track. The M50/330mm disc combo could stop a plane and allowed me to grab the lever deeper and deeper in the curve entries as the day progressed, a necessity given all the power of that Italian V4. Standard cornering ABS works with the rear lift-up mitigation system to keep that rear wheel down at corner entry. It has three levels and you can turn it off as well.

This bike is ready for track days with a pit lane speed limiter and a launch system offering three settings. All the rider needs to do is open the throttle wide and release the clutch as he normally would then shift up through the gears. Another improvement toward making us feel like champs.

The Aprilia wheelie control offers three modes and is able to tell when a wheelie begins and ends and kicks in to soften wheel contact with the road. It works similarly to other brands’ systems.

The Pirelli Diablo Supercorsa SP V2 tires we were riding on are stock and we all couldn’t believe how much grip they offer for a showroom tire. A really important point since this is a bike you can ride from your garage to the track and back.

Chassis feel gives just enough feedback to make you feel in control. The whole day I rarely felt the bike slip or feel less than completely stable at high speed or completely leaned over. I felt the electronics intervene a few times to help me become a better rider without getting hurt and it always felt soft and safe. Even the rear wheel slide coming out of a tight turn while on minimal TC level felt safe and made me smile rather than scream. It really is a fun bike to ride.

The look remains exactly the same as last year’s but fortunately the two bikes still look great. The RF look was my favorite. If you want to take it on the road, the cruise control will help you relieve the stressed wrist but all gears over second will become useless on this 201 claimed hp superbike. Even if you toggle through the power modes.
Riding these two Italian beauties around the impressive Texas track was a great experience. The RR and RF look great and offer more power and performance than most can exploit to their full potential. Fortunately, thanks to an electronic aids package improved from last year and offering more easily accessible performance we were able to have great lap times while holding a silly grin all day. Although these V4s may not be as user friendly as some competing models, their sound environment when you twist that throttle is exhilarating and makes you want to ride them all day. Some may argue that they should have changed the look of them but hey, when it works, why not keep it for another year!

If I had to choose between the RF and the RR I would probably go for the “factory” ride given its stellar Öhlins suspension. It showed its superiority mostly in the fast side to side flicks. But if I had to pay for it, I would probably be very satisfied with the RR’s and its lower price tag. It offers a very respectable performance for which most cannot even extract the full potential. Also, with some minor adjustments and expert advice, I bet you can bring the RR’s performance very close to the RF’s. If I wouldn’t ride it to the track on a regular basis I would also favour the softer suspension of the RR offering a more comfortable ride on the road. Overall, they are two very potent bikes for track and everyday use with the added bonus of the Italian flair.