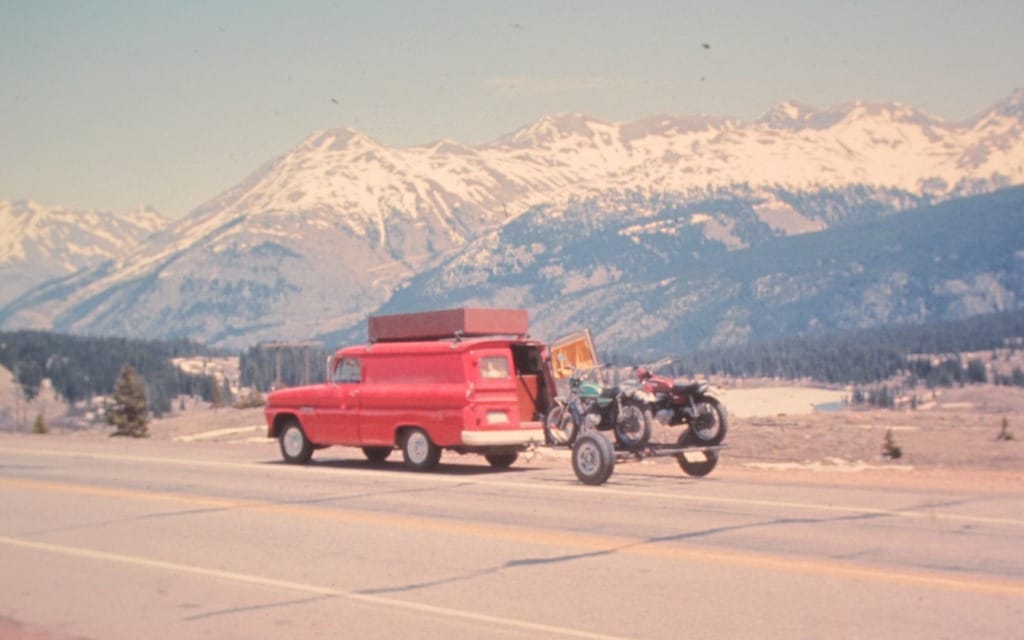 The bike was a 1971 CB450 Honda, bought brand new for $1,250. I’d ridden it just one summer when chill October winds dared me to chuck my job and follow the Honda’s headlight south. Four weeks later, all the planning a naive and overconfident 22-year-old needed was complete. Interstate 90 south from Buffalo was my open invitation to America’s adventures and idiosyncrasies on the way to Mexico.

November 1st arrived rainy and just a few degrees above zero. Rainwear consisted of a $10 rubberized canvas jacket and suspender pants fresh from the local Army & Navy surplus store. With the ankles taped up, those pants could hold gallons of freezing cold rain water. Within 40 miles, my teeth were chattering, my core was shivering uncontrollably, and I couldn’t feel my fingers or toes.

I had to stop at every single roadside fuel plaza along my route, and the drill never changed. Straight to the bathroom, pee, then hug the hot air hand dryer and shove its chrome nozzle down the front of my pants. Order a bowl of chili, eat it slowly while the water inside my rainwear reaches room temperature, pee again, fill my gloves with hot water from the washroom sink, then ride south until the next stop. I only made 200 miles that first day, and a long, hot bath couldn’t stop the shivering.

The most joyous day of the trip was when I peeled off that pseudo rain suit, shredded at the sleeves and cuffs by the wind and rain, in warm Alabama sunshine, and pitched it into the garbage.

The dockyards of Mobile, Alabama, are immense, and I was keen to explore them. The entrance gate was barricaded, and the barbwire-topped chain-link fence was covered with No Trespassing and No Admittance signs, so I rode right up to the gatehouse and asked if I could look around. The biggest, scariest dude I’d ever confronted emerged, raised his shades and tilted his hard hat back, just staring at me. He walked past without saying a word, looked at my bike’s plate, and bellowed, “Where the fuck is Ontario?” There was a lot of swearing in this particular conversation.

I replied, “Canada,” which meant nothing to him. Then I said, “Fourteen hundred miles north, even north of New York.” He slapped his hard hat on his thigh and shook his head. “Ya’ll rode that little thing all the way here from there? Come on in!”

The next two hours were spent on a personal tour of the dockyards, including an unforgettable 15 minutes in the cab of a swaying, sky-sheering crane unloading bauxite from the deep, black hold of a South American ship.

Later, alone in Mexico, on pavement and dirt roads, riding through filthy cities like Vera Cruz spewing oil and chemical smoke into the air, and the poorest of villages like Campeche where everyone wore immaculately clean white shirts—it’s all a blur.

Rolling into Merida, gateway to the Yucatan Peninsula back then, is not a blur. The Honda developed a bottom end rattle. The local bars were filled with American draft dodgers from the Vietnam War, and as I’d hoped, one of them recommended a mechanic. Jefe’s shop was rusted sheets of corrugated steel wedged between two buildings, with an iron gate across the front, and a haphazard mess of 50 to 125 cc motorbikes spread all around.

Jefe listened to the engine and confirmed that I needed a new crank assembly. As my spirits crashed, wondering how I could possibly get parts in a country where a CB450 was more rare than a street mutt without flees, Jefe said I was in luck. “My brother’s in California delivering drugs. I’ll get him to pick up a crank assembly for you.” Those were the days when long, greasy hair and a Fu Manchu granted one trusted brother status automatically. A week and $350 later I was on the road.

Spin forward a couple of years, and my girlfriend and I are hanging out, day-dreaming, watching crimson and orange southern Ontario leaves dropping to the ground. Resignations are given to our employers, and a month later there’s a two-place motorcycle trailer hooked up to our ’66 Chevy panel truck, a Yamaha DT1 on one side, an RT3 on the other. The interior of the truck has a Murphy-bed style foam mattress hinged to one side, a cupboard with pots and pans, and whatever else 25-year-olds in love need for a winter in Mexico. On the roof is a plywood box containing extra tires and wheels for the truck and bikes, extra Castrol oil for the truck and bikes, and a few tools.

Two months of off-road motorcycling bliss in Arizona, Colorado, and Mexico followed. If we saw a dirt track or burro trail that looked rideable, the truck and trailer were left parked on the side of the road, locked but no curtains drawn so would-be thieves could see there was nothing of value inside. The enduros were unloaded, and my future wife and I roosted off to ride amongst the cacti and yucca.

No bash plates, no bark busters, no Klim outfits. No GPS, no high-capacity fuel tank or special shocks. We had plastic metalflake helmets, Malcom Smith goggles, maybe some CTC gloves and work boots—but we rode and wheelied and fell off and laughed.

And now, when I’m blasting down a gravel road just north of the Ottawa River, or somewhere in Pennsylvania on my GS650, gingerly trying to break the rear wheel loose in a sweeper, my heart’s still flying through that spectacular terrain of Mexico.