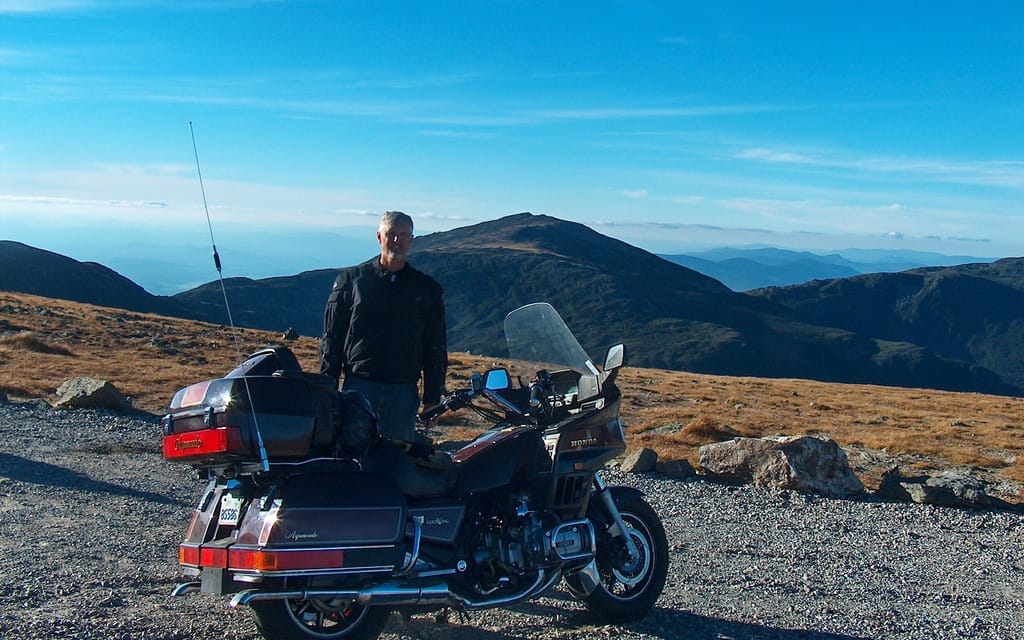 It was a gorgeous clear September day, and the scenery around me was spectacular. I dropped the old Gold Wing down to first gear and chugged on, not daring to take my eyes off the very steep, narrow road. The unguarded drop-off to my right fell away a thousand feet over a field of boulders. My arms and shoulders ached from the tension of holding onto the bars, and ahead of me, my brother-in-law Derek clutched the bars of his old Harley. We had already made a number of switchbacks, and had broken out above the tree line. One steep stretch without pavement had given us the willies for a couple of minutes. The mountain seemed to rise forever—how much farther could it be?

Another hairpin curve folded the road over and up at a seemingly impossible angle, like one of those optical illusions of a never-ending staircase. An SUV creaked around the bend coming down, leaving me about six feet to scoot around it. The smell of overheated brake linings filled the cold mountain air. I gave the boxer engine some juice, and it shuddered up the steep incline, then smoothed out as we broke out onto an open plateau, at a much saner angle. Derek’s bike coughed a little and sped up as we approached the parking lot at the top of Mount Washington, New Hampshire.

We parked and climbed to the observation deck, still shaking with nervous energy as we took in the magnificent view from 6,288 feet. (Mount Washington is the tallest mountain in the North-Eastern United States.) There was a cloud bank beneath us on one side, and a clear view for perhaps 50 miles on the other. The whole scene was surreal. I filled half a camera card with pictures as we lingered, putting off the descent as long as we dared. This was our final destination, 900 km and two days from our homes in Pembroke, Ontario, in September 2010.

Unfortunately at that time, with a busy family and job, almost all of my motorcycling consisted of commuting and short trips into town. Occasional day trips into the hill country to places like Wilno, Calabogie, Foymount and Quadeville kept me sane, but longing for more. Finally, in 2009 and 2010 Derek and I took a couple of longer trips—first a three-day stint around Algonquin Park, and then this five-day, 1800 km round trip to Mount Washington.

Neither of us is iron butt rally material. Even my comfy ’85 Aspencade gets a little painful to me after about four hours in the saddle. We prefer to stop and smell the roses, finding any excuse for a quick break—a yard sale, some sightseeing, a monument, or a good restaurant. Riding vintage bikes, frequent stops are good idea anyway, to check things over. (Derek’s ’77 Harley Police Special leaked oil constantly on the Mount Washington trip. My GL1200 blew a fuel pump on our first trip, laying us up in Parry Sound for a day.)

Our trip had started with a crossing to the U.S. at Ogdensburg, where we followed the St. Lawrence River to the northern tip of Lake Champlain. Unfortunately, all the state parks had closed after Labour Day, so camping was out that night. A tiny motel room refreshed us enough to carry on through the rolling hill country of Northern Vermont, and New Hampshire. After a great lunch near the foot of Mount Washington, we made the 45-minute climb from a balmy fall day to near freezing temperatures at the top. It was definitely the highlight of the trip.

Although we were afraid of the descent, it was actually much easier than going up the mountain, affording us a better chance to see the scenery. We were soon recalling the day over beers at a campsite we found near the base of the mountain.

The next day we had a memorable breakfast with a lone guitarist playing Pink Floyd in the corner of a small restaurant, then we headed west to Burlington Vermont. We boarded a ferry and crossed Lake Champlain in nearly summer temperatures. The ferry was loaded with an entourage of Gold Wings. —finally, like-minded brothers to talk with about my bike! There were everything from beautifully restored late ’70s GL1000s, to nearly new GL1800s. My 1985 Aspencade fit right in. (Up until that point, most people walked past my invisible Gold Wing to talk to Derek about his old Harley. This was payback.)

After the ferry, we sped west out of Port Kent towards our next stop at Lake Placid, New York. I will never forget the last stretch of S curves following the Au Sable River, with the low sun shining on the loops of fly-fishermen’s lines to our right, and painting orange light across towering rock faces to our left. We tilted back and forth, gliding on the smooth pavement, like riding in a postcard.

After a good sleep at Lake Placid, a blast down I-81 took us to our crossing at Kingston and a short visit with our school-bound daughters. We stayed a little too long, and ended up riding for a couple of hours in the dark as the temperature plummeted. The next morning we lingered over breakfast to let the temperature climb, then rode a couple more hours of sweeping curves on highway 41 to get us home again.

September was made for motorcycle trips. The mornings can be cool, especially in the mountains, but clear days and quiet roads make the rest of the time pure heaven.