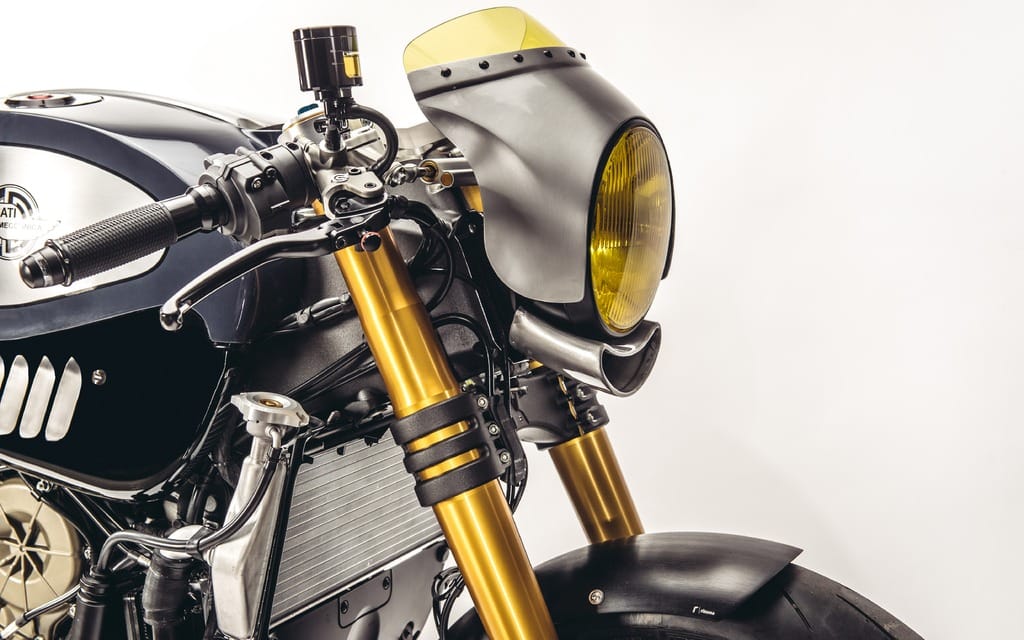 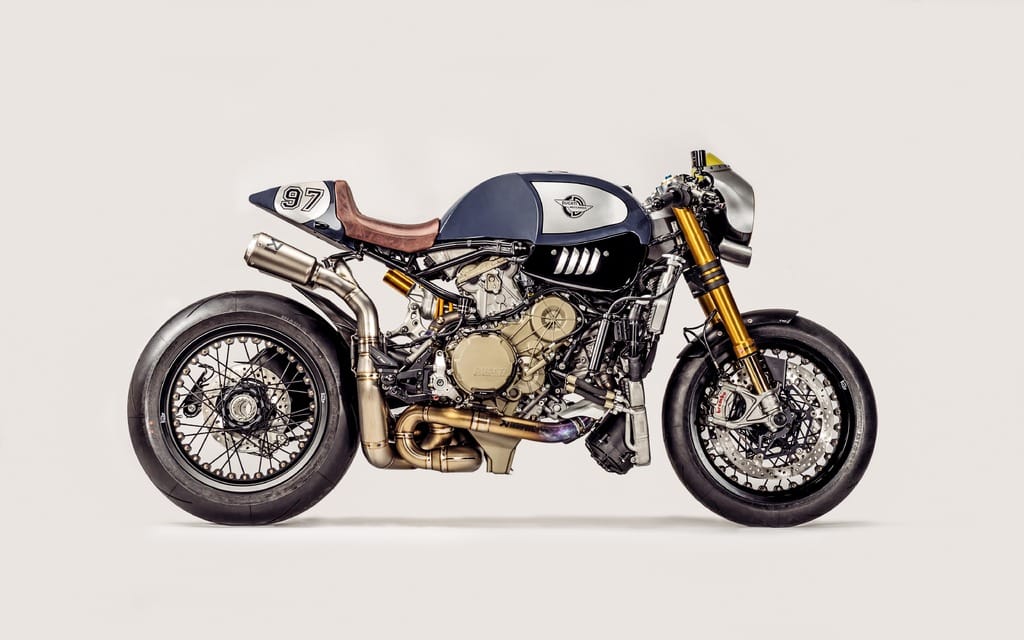 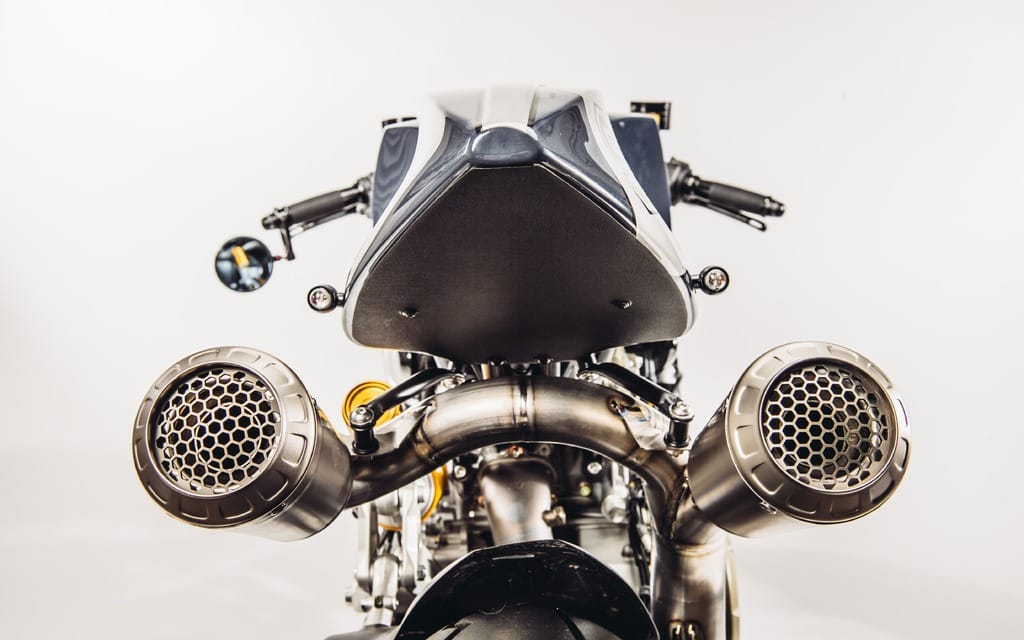 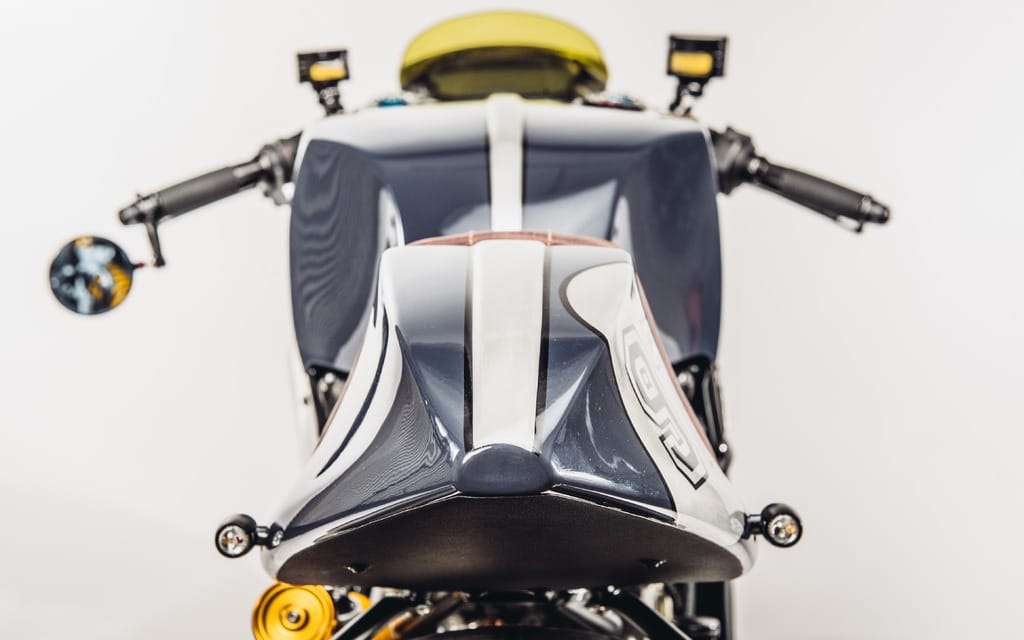 With the circus that is the World Superbike Championship wrapping up for the weekend at the Imola circuit, Ducati asked a few select journalists to stay behind. After a superlative-laden speech by Ducati supremo Claudio Domenicali, they hit the track on the brand new 2016 Ducati Panigale R. To say that they were gobsmacked would be a gross understatement.

So it’s probably for the best that a certain bunch of Swiss motorcycle fanatics weren’t on hand. Undoubtedly they would be thinking that there was even more to be had from the bike. Fortunately, their absence did nothing to quell their creativity. And the result is arguably the world’s fastest cafe racer; a unique collaboration of talents that has delivered a freakishly cool animal known simply as “The Blue Shark.”

The incubator for this mind-bending project was the imagination of Parts World CEO Andy Matter. “The idea for the Blue Shark came step by step,” he begins. “After browsing the Web and many other sources, I found out that no one had ever customized a Panigale R as a cafe racer. Moreover, even the Ducati specialists were doubtful anyone would succeed with such a project. That said ‘Hey, it is already the world’s most beautiful sportsbike, you can only make it worse!’

“That’s when the trigger was pulled in my head,” says Andy. It just so happens that Parts World is Switzerland’s premier aftermarket distributor and to make this insanity happen, they joined forces with Ducati Zentralschweiz, Schaub Metalworks and exhaust giant Akrapovi? to form the ultimate dream team.

The Blue Shark started its life with zero kilometres on the clock as a brand new Panigale R, straight from the Ducati Zentralschweiz showroom floor. But despite the machine’s status as a God of Bikes the team quickly ripped into it, pulling off the stunning factory red fairings to reveal the skeletal beast beneath.

Instantly they were struck with the first challenge of the build, and clearly one that had deterred others from ever getting past this stage. There were wires everywhere, something that shouldn’t surprise given the technological power house that the Panigale is. So hours were spent hiding and re-routing the wiring for the ride-by-wire, ABS, wheelie control, data analyzer, espresso machine and a host of other units including the brains of the operation, the mighty Bosch IMU.

With Andy happy that the bike was as clean as it could be and having removed all the stock plastics, he had to find someone crazy enough to build an all-alloy body. The challenge was accepted by master craftsman Raphael Schaub of Schaub Metalworks.

The contrast between his methods and the technology overload of the stock bike could not be more stark. Raphael works metal by hand. There’s no 3D printer or fancy CAD modeling here. Offering up pieces of two mm aluminum sheet, he simply visualises the components and forges them by hand. The first of these incredible parts is the gas tank that had to be silky smooth café racer on the outside and complex mix of angles and parts to work with the EFI on the inside.

With the final tank taking on classic ’60s style thanks to the smooth lines and perfectly shaped knee dents, the tail could now follow suit. It’s almost impossible to explain just how difficult it is to create this look while placing it over the factory Panigale subframe, but the metal maestro that is Raphael has somehow pulled it off.

The single seat with a vintage-style café hump follows the kicked-up tail lines of the modern Duke, while still creating a seamless transition with the new tank. To further enhance the look and add to the bike’s muscular shoulders, Schaub crafted some extra gill-like side vents that merge perfectly with the tank.

Not only do they add a unique visual aspect to the bike, they cover one of the bike’s control units and their louvres further assist in the bike’s major heat extraction requirements. Wanting all the bodywork to be as functional as possible, the next step was to recreate the ram air intake in alloy instead of the factory’s original carbon fibre.

Mounted below the headlight, the shark mouth-like opening actively forces air into the airbox to assist in plenum pressurization. It looks incredible. Above, the twin headlights are gone, replaced with a traditional unit that now wears an alloy fairing and a beautifully frenched-in yellow screen with some industrial-style fittings for more of the old-school look.

With the bodywork complete, Andy had a serious struggle on his hands; how to convince his partners to go with the unusual colour he had in mind. But with a good friend close by at Burkhardts paint, everyone agreed to let the master panel and paint man do his job.

Now, the colour combination couldn’t be further from the factory Ducati red, but it perfectly shows off the incredible lines of the Schaub alloy pieces. The vintage blue with black accents give the whole bike an “anything but Italian” feel with the raw metal allowing the yellow of the lights and the gold Öhlins suspension to pop in all the right places. Finally, the job was completed with a hand-stitched leather seat, the hue of which was chosen for its ability to accentuate the dominant blue hue.

Of course, powering the project is the incredible Ducati L-twin 205 hp engine as used in the factory’s own WSBK efforts. In fact, it’s hard to think of any café racer in existence capable of getting you to your favourite watering hole as fast as this one. The internals are precision perfect, titanium is used for the rods and the valves, while the crankshaft is tungsten-balanced.

With the fairings off, it’s true to say the water-cooled beast is not as elegant as the simpler air-cooled lumps, but instead you are free to marvel at one of the world’s most incredible motorcycle engines on full display. Revel in the NASA-like complexity of the elliptical throttle bodies, quick shifter, cast magnesium covers in gold and the Vacural-formed crankcases.

But what really captures your attention is that exhaust. With Parts World the official Akrapovi? distributor for Switzerland, they managed to source direct factory help for the pipes. So impressed by the potential the Blue Shark design possessed, the boffins at the “Big A” wanted to help to adapt a genuine WSBK set-up.

The titanium system, nicknamed the “Shotgun,” was requested by factory Ducati rider Chaz Davies who felt the 200+ hp engine needed a little more power. It turned his season around, and it adds an orchestral soundtrack and visual appeal unlike any other exhaust system on the market. With the quick shifter on board, the twin cans provide the perfect barrels for launching impressive sets of flames out the bike’s tail.

With Parts World being the distributor for major brands like Rizoma and Kineo, it made perfect sense to show off their wares. Rizoma comes to the party with their gorgeous fluid reservoirs mounted on the clip-ons. A set of their fully adjustable rear-sets makes it an absolute pleasure to punch through the gears. But if one addition was going to make or break the build, it was the wheels, and with Kineo on board, they made it in a big way. The single-sided swingarm really shows off the stunning spoked rims that are capable of working with the latest tire technology while giving the bike classic appeal.

Thanks to the homologated Akrapovi? exhaust, the bike will be fitted up with race rubber to hit the track. But just as important to Andy is the fact it’s 100 percent road legal. “My personal goal was to create something new; a radical café racer that is still usable and rideable under all conditions. I also wanted to make something unique by thinking out of the box, which isn’t always easy. I guess it is like a great painting — you can’t finish it in one sitting, but instead it takes countless hours and a lot of dedication and determination.”

Of course, such a remarkable feat could not have been achieved without the input of all the major supporters involved. It’s a testament to working as a team with a singular vision. And what a vision it is. So if you want to see the Blue Shark in the flesh, head to Biarritz for Wheels & Waves or to Glemseck in Germany this year. Its bite won’t leave a physical mark, but you’re likely to be in moto therapy for years to come.