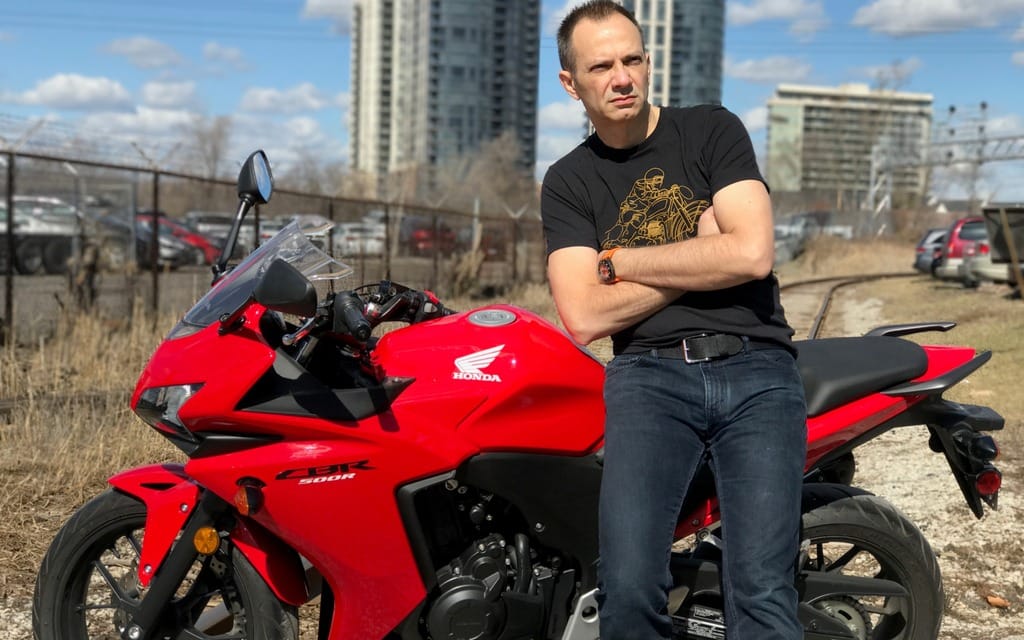 Motorcycle film fest planned for fall in T.O.
A motorcycle film festival will be held in Toronto early this fall, and Easy Rider will not be on the agenda. Same for On Any Sunday. As great as those two films are, and as little as one says about motorcycling and as much as the other says, they’re a bit too old for this festival. Ancient, even.

About four years ago a Torontonian named Caius Tenche bought his first motorcycle and got hooked. “Yeah, big time. I started consuming everything I could online that had anything to do with motorcycles.” He found a Youtube series, “Stories of Bikes,” consisting of vignettes about people and their motorcycles. “The stories were amazing. The photography was beautiful, but the stories were great. I did some research and found a motorcycle film fest in Portland and in New York. I imagined being in a theatre, seeing these things on giant screens, surrounded by a couple of hundred people, all that energy. I wanted to go, but I couldn’t make it happen. I thought, “Man, I wish there was something like this in Toronto.”

He thought about it for a while. “About a year, and then I said I’m just gonna do this.” There were a few minor issues to resolve: “What if I can’t find any movies, where do I get a theatre—every little thing, how do I do it?”

He says he “hit the ground running” in January with an opening for submissions. “So far I’ve received more than 30 films from 11 countries. Two are from Canada, and I wish there were more.” The two Canadian subs are “really good,” he said, and he’s pretty sure that at least one of them will make the final cut.

There are quite a few entries from the U.S., a lot from Europe—Germany, the U.K., Italy, France—and one from Russia. A couple of Australia and New Zealand. “One thing I love,” he said, “is to be able to see our motorcycle culture in other parts of the world. It’s different, but similar.”
Submissions are mixed in length, quite a few shorts and a few full-length features, and there’s a mix of quality, he says. “Some of the stuff is okay. There’s nothing with a GoPro on a helmet, that’s not what we’re looking for. I’m looking for something that will move me and connect with the audience. There’s got to be a story behind it. There needs to be something that connects with us emotionally, whether fictional or real.” He says some films are about “a particular builder and their artistry,” some are about people’s journeys, their hardships, “how motorcycles connected them and got them through hard times.” Whether the filmmaker’s technique is great or not-so-great, it’s the story that really matters, that touches people, he says, but some of the films, in fact, show production values “typical of a Hollywood movie.”

Tenche, who does not have a background in film, says this project is “the most fun thing I’ve done in I don’t know how long.” He’s working alone on it, and while he had some questions in the beginning, he’s not nervous anymore. “I definitely was nervous in the beginning. I didn’t even know how to connect with film makers.”

But he’s no longer worried. “I’m super excited. There’s a pile of work to do, and I never shy away from work. I’ll do it, I’m working my absolute hardest to make sure that what we’re gonna put on will be a high-quality event. This is going to be an authentic film festival experience. I’m thinking about every nuance. I want to make sure that when people come to this event, at the end they’ll say ‘that was awesome.’”

The festival will run at the end of September at the Revue Cinema in Toronto. The list of accepted films will be released on Aug. 4. Tenche plans to hold an opening night party, to invite some of the participants in Canadian films, and maybe even to arrange a filmmaker’s workshop. Films will also be judged (photographer Bill Petro will be one of the judges) and awards will be presented for best short, best feature, and audience favourite.