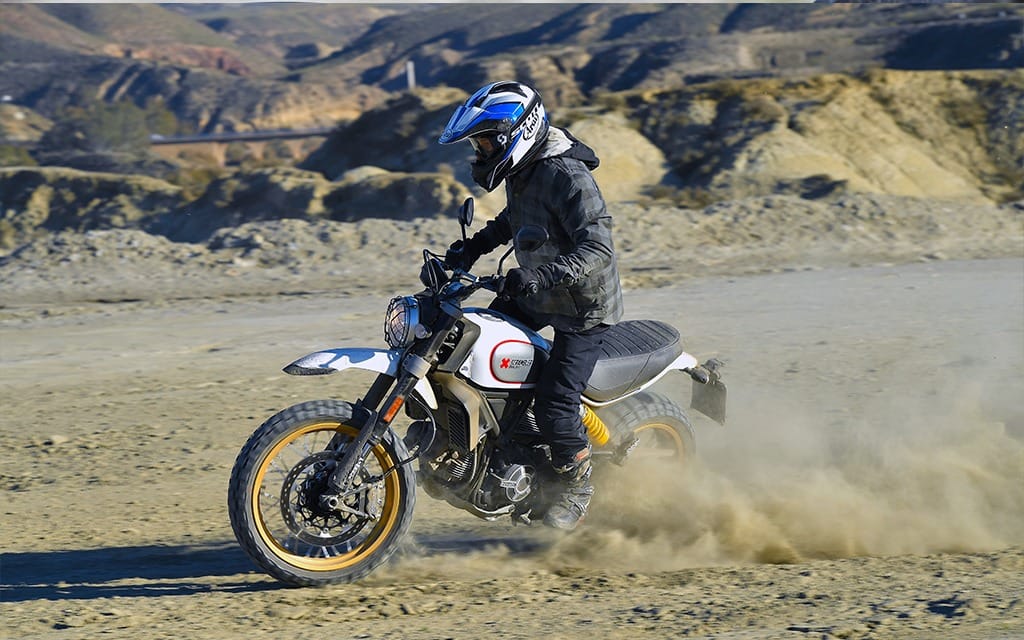 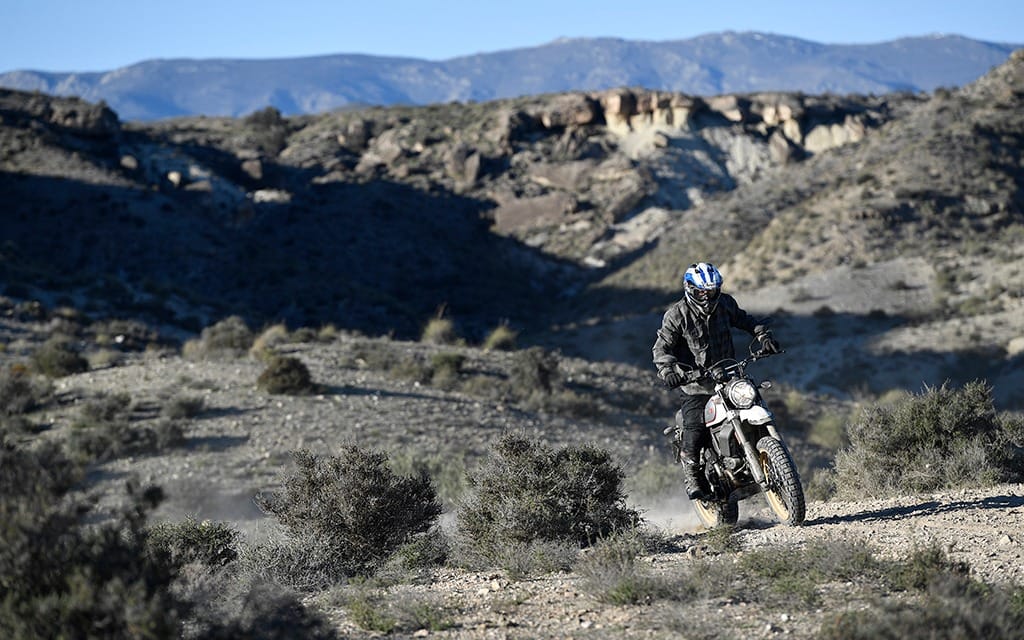 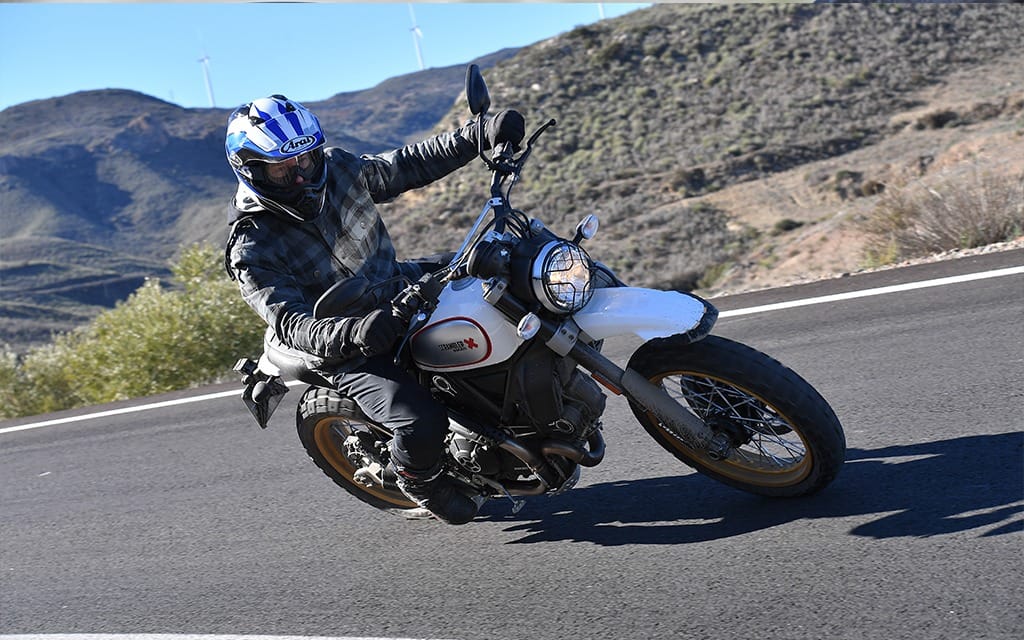 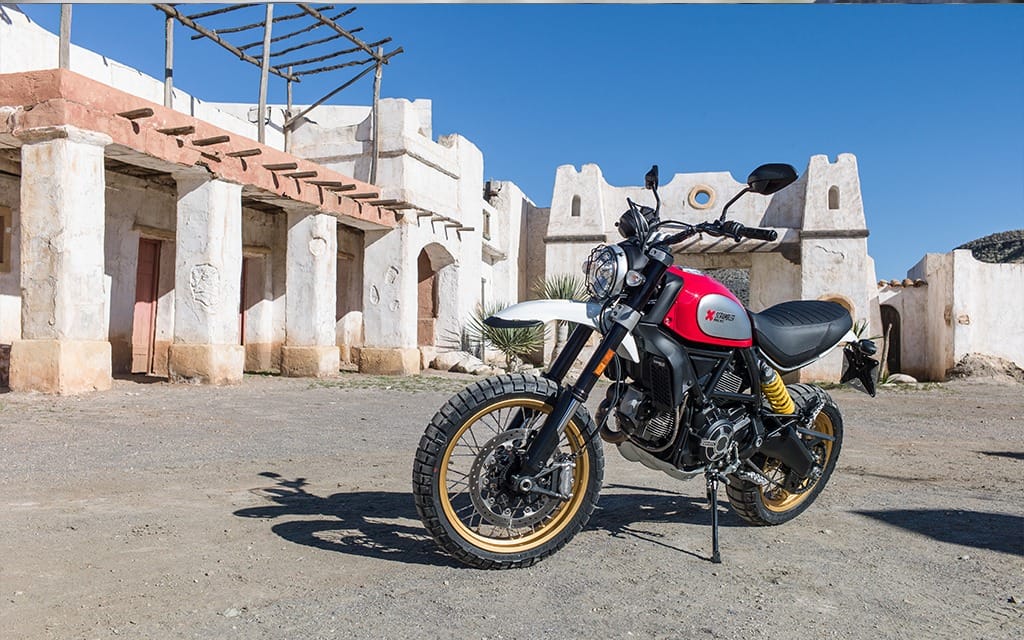 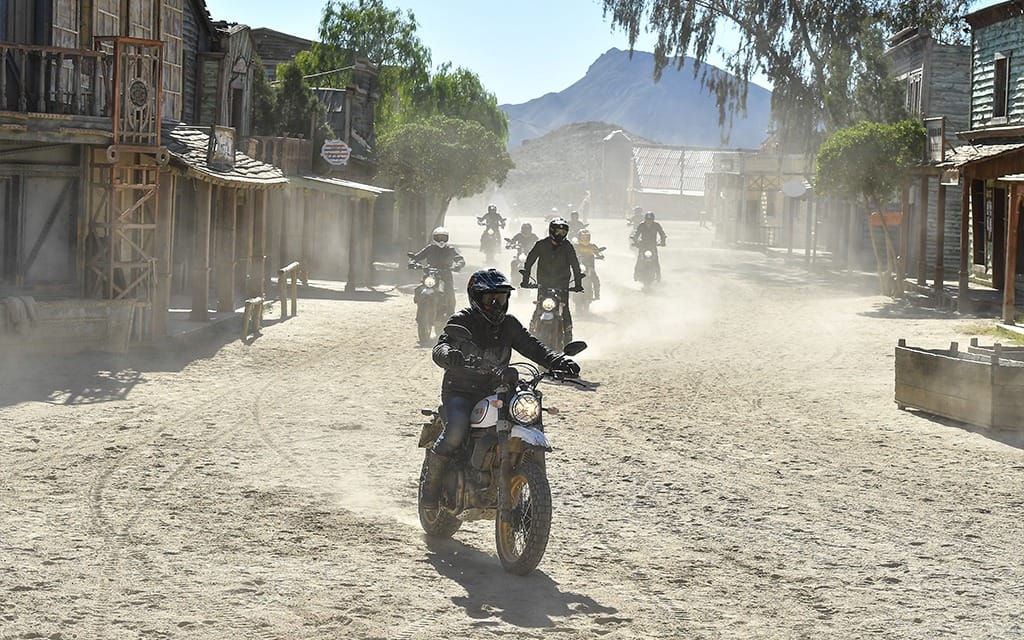 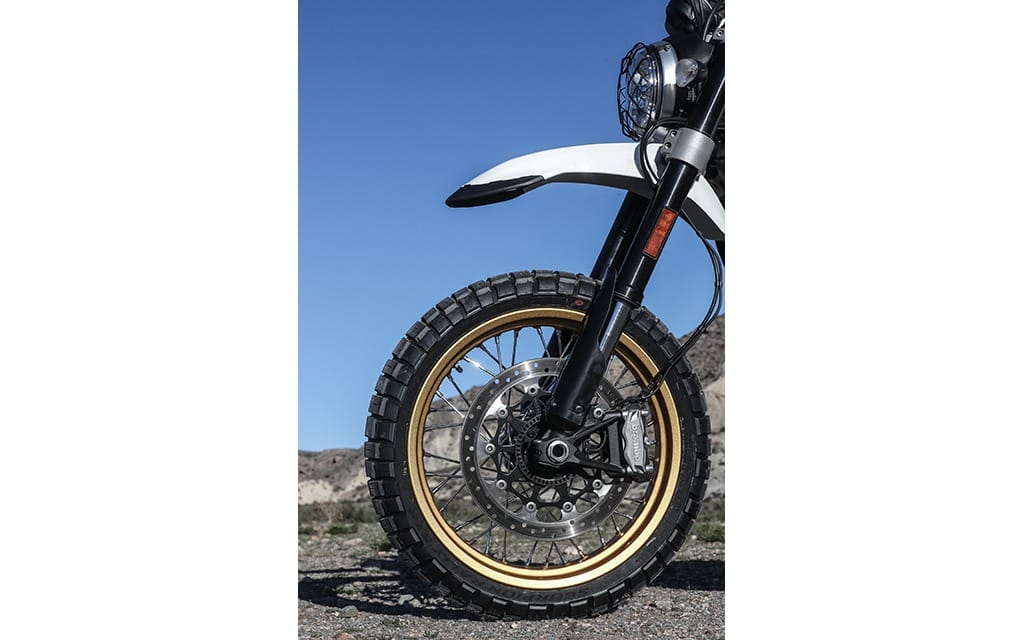 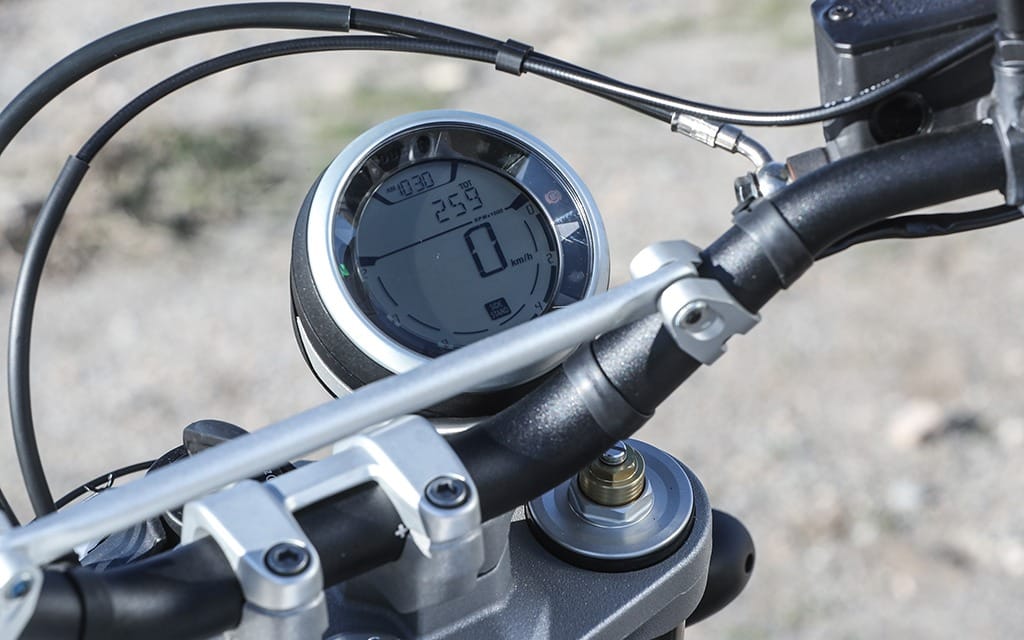 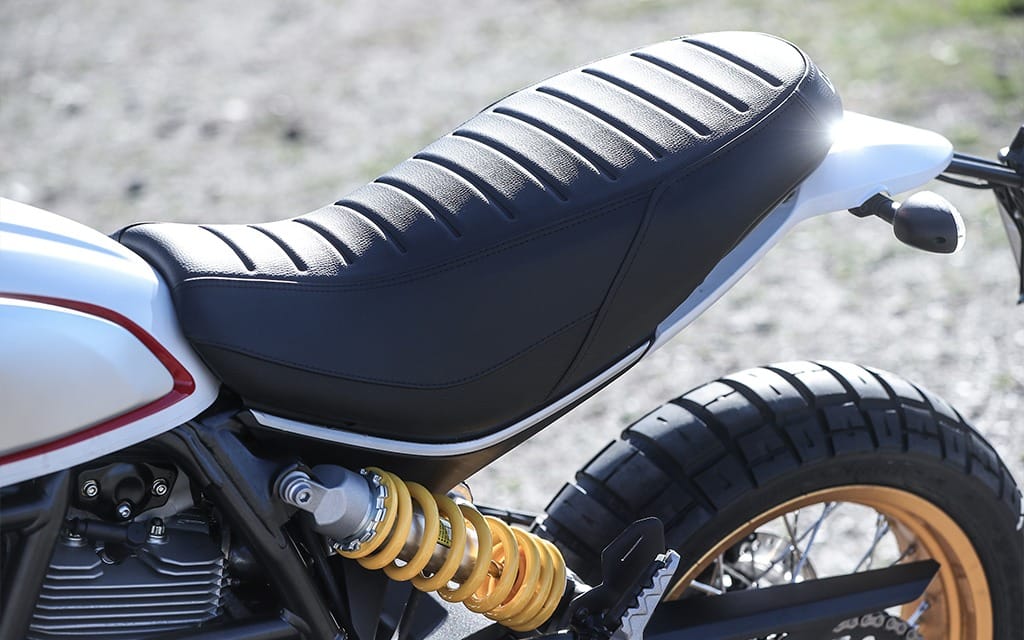 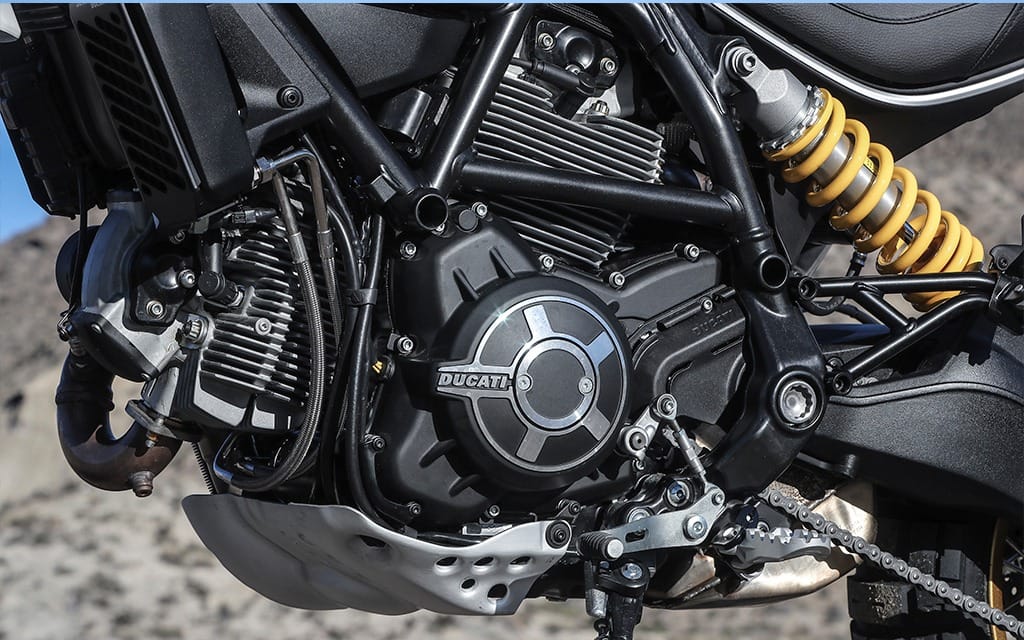 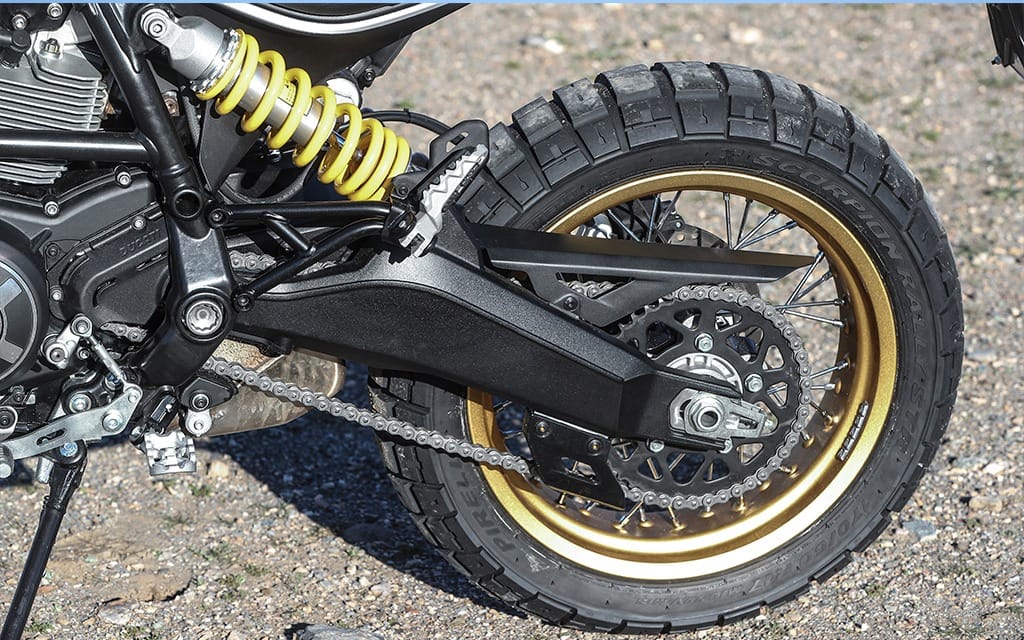 Ducati Scrambler Desert Sled: Class of its own

Is the Desert Sled a proper off-roader? Ducati expresses its intentions with a presentation in a Western movie setting
By Guy Caron

The press presentation of the new addition to the popular Ducati Scrambler line took place in the Tabernas Desert in Spain, a fitting location for the new machine. We were welcomed in a movie-set village where many spaghetti Western films were filmed in the ’60s. At the time when Sergio Leone was inventing the genre, motorcyclists racing in the southwestern United States (where the action of those movies was supposed to have taken place) raced on modified street bikes. At the presentation we were informed that the term “desert sled” comes from the machines built for, you guessed it, desert racing. Knobby tires, long travel suspensions, a skid plate and a few additional modifications, most of the time on British twins, were the way to go for a desert-racing bike back then.

The Ducati Desert Sled does not pretend to be a race bike; it is described as fit for easy off-roading, but it is very close in spirit to those ’60s racers. The setting for the launch was the location where Leone filmed The Good, the Bad and the Ugly. I would soon find out which character best describes the Desert Sled, if any.

While we have many so-called scramblers available today, most are street oriented. They can tackle a smooth gravel road and they look the part, but real off-road work is not in their job description. That includes the Scrambler from Ducati, available since 2015. The neo-retro look suggests off-road intentions and hails back to those ’60s conversions, but other than the aggressive tread of the tires, not much makes these cool motorcycles worthy of the machines that inspired them. Comes the Desert Sled: a reinforced trellis frame, beefier swingarm, long travel, adjustable suspensions, 19- and 17-inch spoked wheels shod with Pirelli Rally STR tires and, of course, a serious skid plate. On paper it is clearly equipped with the required bits. On close inspection it also appears quite ready. At least for me it ticks the right boxes; well finished and with a pleasant stance, it vaguely reminds me of an XT500.

The L twin Desmodue 803 cc, air/oil cooled, two-valves-per-cylinder engine is the same one that propels the Icon and the other full-sized Scrambler. It cranks out a claimed 75 hp at 8,250 rpm and 50 lb-ft (68 Nm) of torque at 7,750 rpm. The frame is reinforced to better deal with the forces that it will see in this application. Bracing on the left side and mostly the two extra pieces connecting the rear of the structure to the swingarm and reaching down to the pegs means that the motor is not a stressed component anymore, like it is on the road only models. The swingarm is longer and mated to a preload- and rebound-adjustable shock. The 200 mm of travel it delivers is matched up front by a fully adjustable (preload, rebound, compression) 46 mm Kayaba inverted fork. The rake remains at 24 degrees with the trail increased to 112 mm for better feel in the dirt with the longer 1,505 mm wheelbase. A Brembo 330 mm single disc brake up front and a 245 mm disc on the rear work with standard ABS that can be turned off. The seat is slimmer at the tank junction to aid reaching the ground, which is 860 mm below the seat (a 20 mm lower optional seat is available). The high front fender and a headlight-protector grille complete the transformation.

That Scrambler Desert Sled is what I was hoping for when the line was introduced two years ago. The promotional videos hinted at off-road prowess then, and that promise now can be fulfilled. I was eager to see how well.

The format of the launch gave me a good idea of the bike and how confident Ducati is of its new offering. We got going on a dirt road from the saloon in Fort Bravo, that far west film setting, and onto a sandy dirt road. From a graded road to a two-track to a sand wash, the first five kilometres were already challenging for some testers not so used to dirt. I quickly got comfortable on the Ducati, the tapered, crossbar-equipped aluminum bar, reasonably high seat and the footpeg location give a cockpit that is effective for either standing up or sitting down. The balance of the Desert Sled is pretty good and for a 191 kg motorcycle it did not feel anything like adventure-bike heavy. In the sandy conditions it felt much closer to a typical dual-sport mount. This is not a competition motorcycle but, short of that, I could push the pace to a surprising level, as long as I adapted my technique. The suspension coped very well with everything I encountered, rocks, ruts and all. The big 120/70-19 front Pirelli can push a bit, but I got better results when I used the rear to initiate turn-in as our guide, Beppe Gualini, leaned toward a sportier pace. The Rally STR tires do actually contribute quite a bit to the good nature of the Desert Sled in those conditions. The less experienced of us still made it through the sand wash we got thrown into; they just took a bit longer, but the Scrambler took care of them quite well in return. The two-valve Desmo motor is quite flexible and easy to work with at lower revs in the lower gears. I had no problems lugging it down to 2,000 rpm to find traction, and with a few revs it was peppy enough to drive forward when I wanted to carry the front wheel over a big hole or initiate a slide around a bend. The new progressive throttle tube, the sweet power delivery and the balanced feel came together when the sand wash turned into a hard-packed, dusty and undulating path. There the new Scrambler shone.

After kicking up dust we ventured on some entertaining canyon roads to evaluate the pavement prowess of the Desert Sled, which will likely spend more kilometres on road than off in the hands of most owners. With good suspension components, the wide handlebar and the upright riding position, I was expecting a fun and entertaining ride, and I was not disappointed. The fuelling was crisp and the chassis felt taught and precise. The radially mounted Brembo brake is powerful enough on paved roads despite being easy to modulate in the dirt. The suspension of the bikes used at the launch had been stiffened up quite a bit for that road portion of the loop. The diving and pitching of the Scrambler was pretty well controlled, and personally, I would have chosen to have some more movement on pavement to get a bit more compliance off-road, especially with the fork compression. The big tread blocks of the Pirelli Rally STR developed for the Desert Sled gave reassuring feedback, gripping the road and letting me explore the ample ground clearance even with the lower air pressure that was set for the off-road sections. Keeping the motor in the 3,000 to 8,000 rpm range meant little playing with the smooth six-speed gearbox, third and fourth gear doing most of the work. The 803 cc Desmodue L-twin comes alive at the 4,000 mark, where the Scrambler would stand on its rear wheel out of hairpins in second gear. With such a short and busy schedule it was hard for me to judge the comfort of the seat but between the short stints we did during the day I noticed there was plenty of room to move my back end around and there was hardly any vibration while cruising at 120 km/h.

What does the Scrambler Desert Sled represent in that popular Ducati sub-brand? With some 32,000 units of the models introduced two years ago sold worldwide, the addition of that higher end, specialized Desert Sled is interesting for the rider who wants a real on/off-road option. It is more expensive and heavier than the base models but we can see why; built to handle the rigor when the pavement ends, the Desert Sled can deliver on its off-road heritage promises. I can easily see myself using the Desert Sled for commuting, playing around and travelling on the weekend. I can see a lot of dirt roads and some trails in that picture; I’d be disappointed not to get such a cool looking bike dirty on a regular basis. I will play the Bad part and let the Desert Sled can be the Good. Nothing ugly for me here!