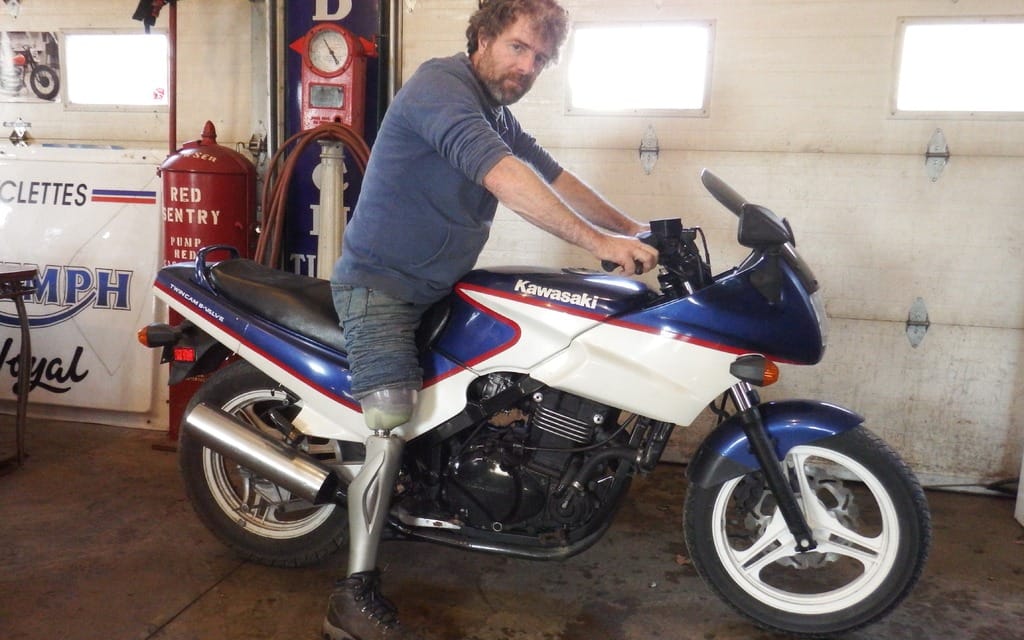 I have been around motorcycles all of my 52 years. My family has always had bikes. I had dirt bikes at 13 and a road bike at 17. My wife Sylvie and I love to travel by motorcycle. We have crossed Canada and toured all over the Maritimes and Québec. I bought a low-mileage 1997 Triumph Trophy in 2006. This was a major change from my 1975 FLH. In the first four to five years we covered almost every paved road in Québec. Next was Winnipeg, then yearly trips to the Maritimes. Between this and endless riding around southern Québec, the miles were starting to add up. I wanted to make it to 200,000 kilometres.

July 27, 2015: 183,739 km. Not far from home, I approached a T-intersection at about 50 klicks. There was a truck ahead of me so I was doing my best to keep a safe distance and stay visible. A gravel truck driver at the STOP sign on my right pulled out in front of me. As I hit the brakes a few thoughts went through my mind: “I’m going to hit him. It’s going to hurt. Nothing will ever be the same.”

The right side of the bike crashed into the truck’s bumper. I was knocked out. When I woke up I could hear voices. I couldn’t see much because of the gravel-truck grille imprint across my right eye. “Lucky I wasn’t going fast,” I thought, then passed out. I woke up several hours later in intensive care. My right leg had been amputated above the knee.

After 12 days in hospital and a few days at home I was sent to the Readaptation Centre in St. Hyacinthe, Québec. There I met my team, Dr. Desbiens, Dr. Chiquoine, Annabelle, and Fannie. Also technicians Remy, Cathy, Anne-Marie, and Nancy. A year and a half later, I have had over 300 appointments and spent dozens of hours fitting and adjusting parts with the technicians.

My recovery was going well so my team decided that I would be a good candidate for a high-tech prosthetic with hydraulics, computer and microprocessors. I saw a Youtube video of a guy riding a motorcycle using one of these and I had to have one. Six months later I got the OK for a Genium by Ottobock. I was determined to get my motorcycle licence back. This had never been done by an above-the-knee amputee in Québec. No one knew if it would be possible to pass the test.

I bought a 1992 Kawasaki EX500, small and light, and I could get both feet on the ground while sitting on it. At the end of June I got my computerized prosthetic. I had a short time to practise, since the test was at the end of July. I racked up 500 km practising basic riding skills around the house and on the dirt road. I was ready for the test at the Constance-Lethbridge Institute.

Upon arrival I was told that this was not a driving test but a test for the prosthetic leg. Since the instructors had never seen one of these legs in action they didn’t know what to expect. The first manoeuvre was both feet on the pegs, then they drop the bike on the right side. I missed getting the right foot down and would have fallen over if it wasn’t for the safety-wheels that they have on their bike. We spent the next two hours inside doing different manoeuvres without missing. They held the bike upright while I had both feet on the pegs, then they pushed the bike over on the right. Then, stopping with only the rear brake and putting only the right foot down. It was hard, it was tough, and it was painful—the worst two hours that I had ever spent on a motorcycle. Then it was time to go outside. I had never been so happy to see rain and hail. I would have to come back. At this point they were having doubts. I was exhausted and having doubts of my own.

I had a month until my next test. I had to figure out a way to get over the awkwardness of using the rear brake for stopping and then getting only the right foot down. I was afraid of pushing too hard and dropping my bike. I had an old Suzuki GS400 that I used for a while. My movements were still awkward. I needed some safety-wheels. Louie and I had the safety-wheels on the bike in two hours, and what a difference they made. I was no longer afraid of falling. Soon I put the safety-wheels on the Kawa. I was practising daily but could only ride for 15 minutes at a time because of the pain. I was using my right foot only, most of the time. Eventually this came naturally. Then, two days before the test, I had a bad non-motorcycle related fall. There was no way I could do the test so it was postponed for three weeks.

After seven days on crutches I was back riding. Test day finally arrived. This time I knew what to expect and had improved a lot. They restarted the test from the beginning and it went very well. Soon we were ready to move outside. We performed another half dozen manoeuvres that I handled easily. One year and six weeks after my accident I became the first above-the-knee amputee to get a motorcycle licence in Quebec.

Some things will never be the same, some will never change. Two weeks after getting my licence back I bought a new Tiger 800 at Moto Montreal Cycle. For info or help e-mail deanhadd@hotmail.com.