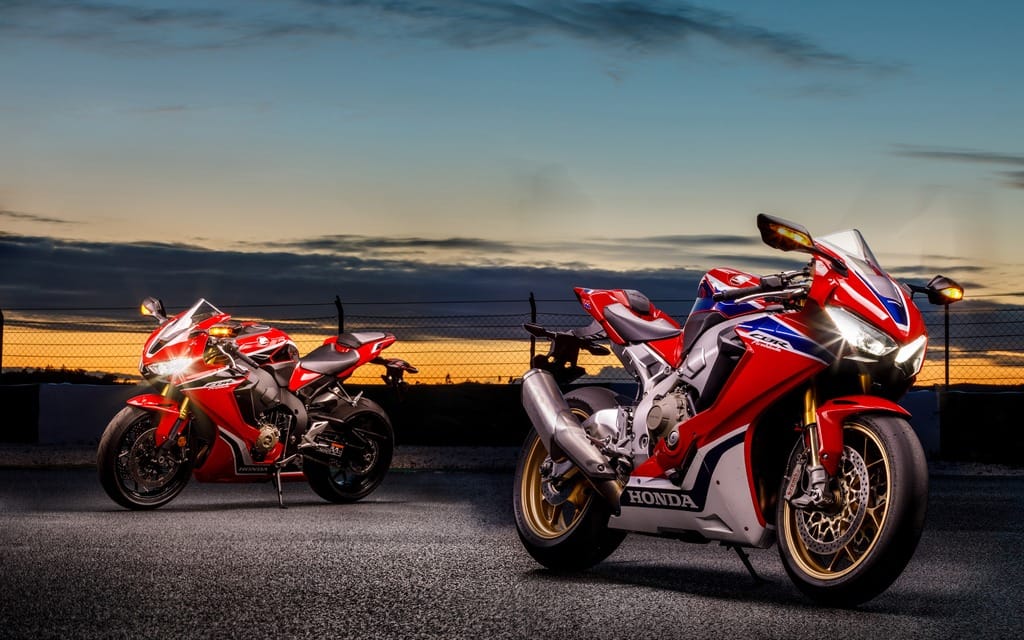 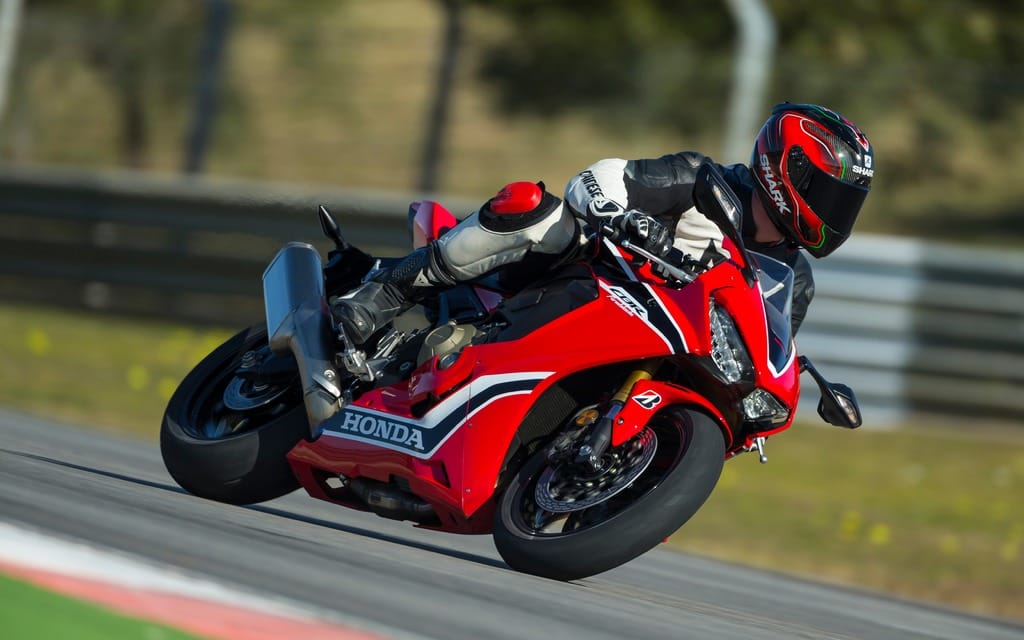 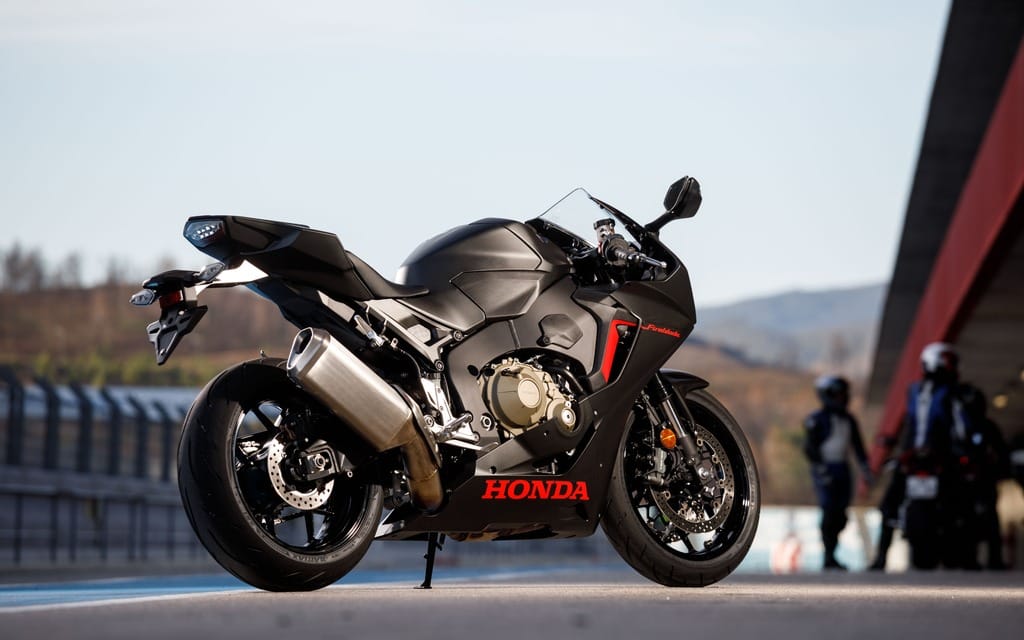 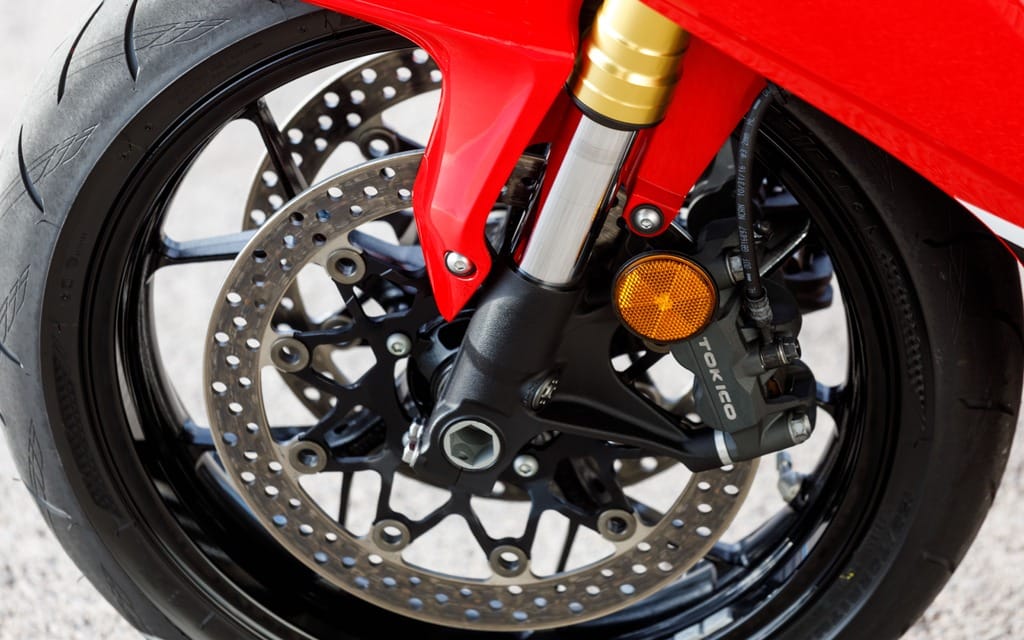 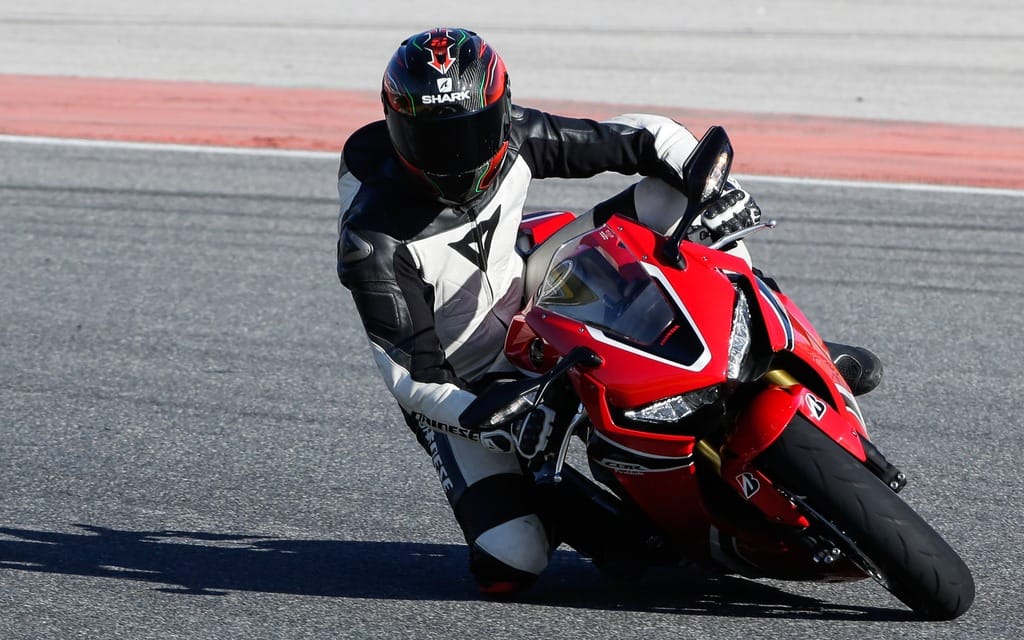 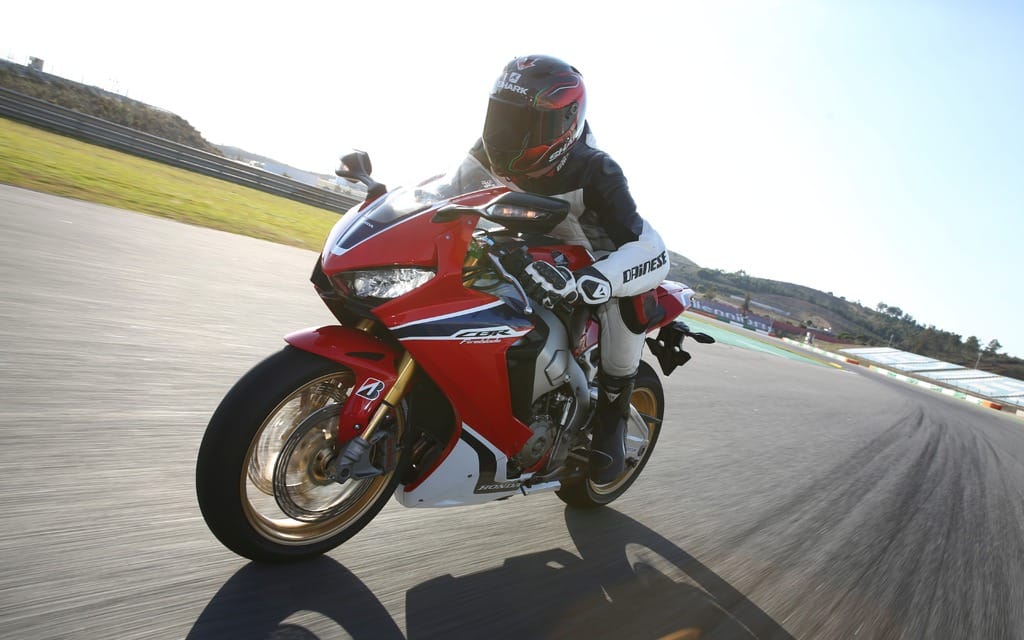 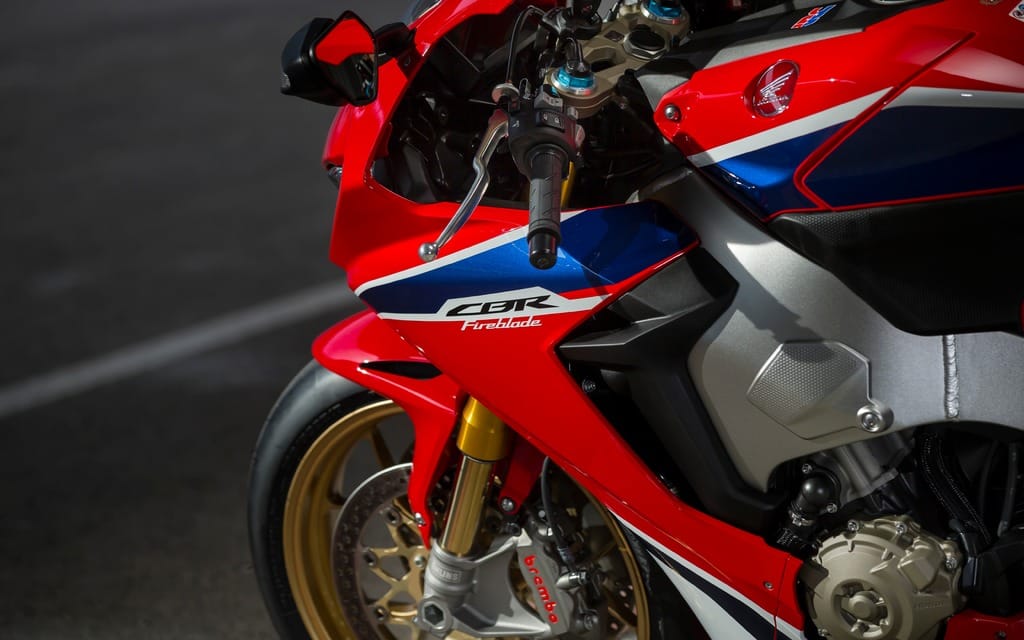 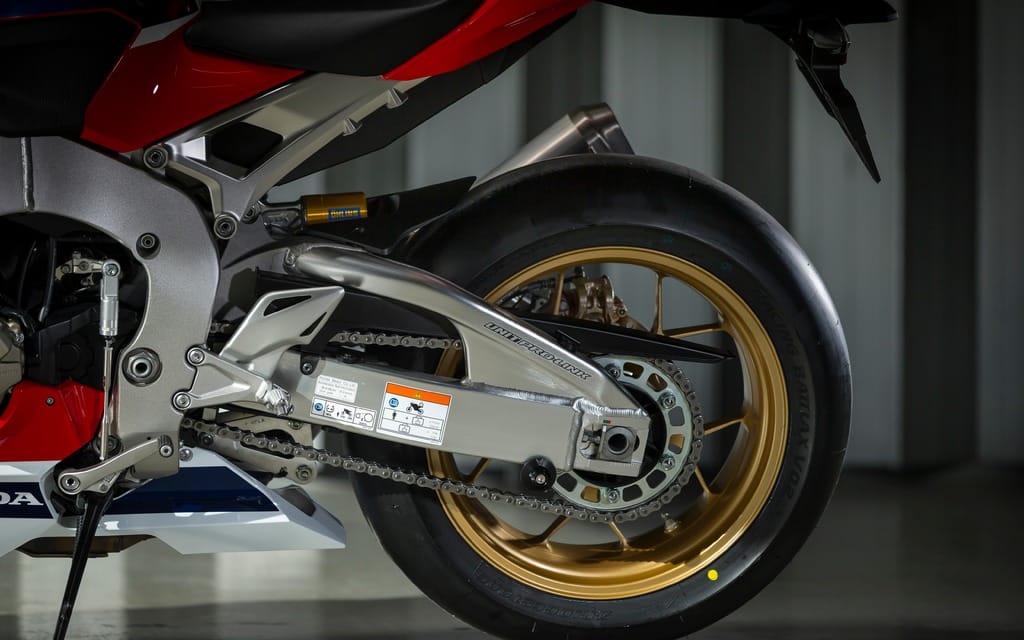 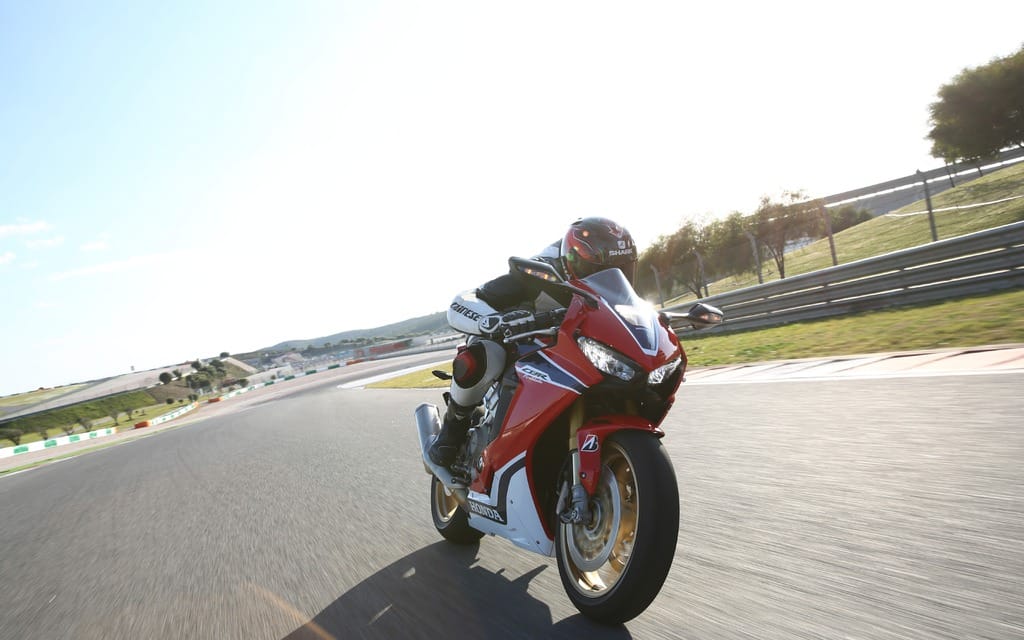 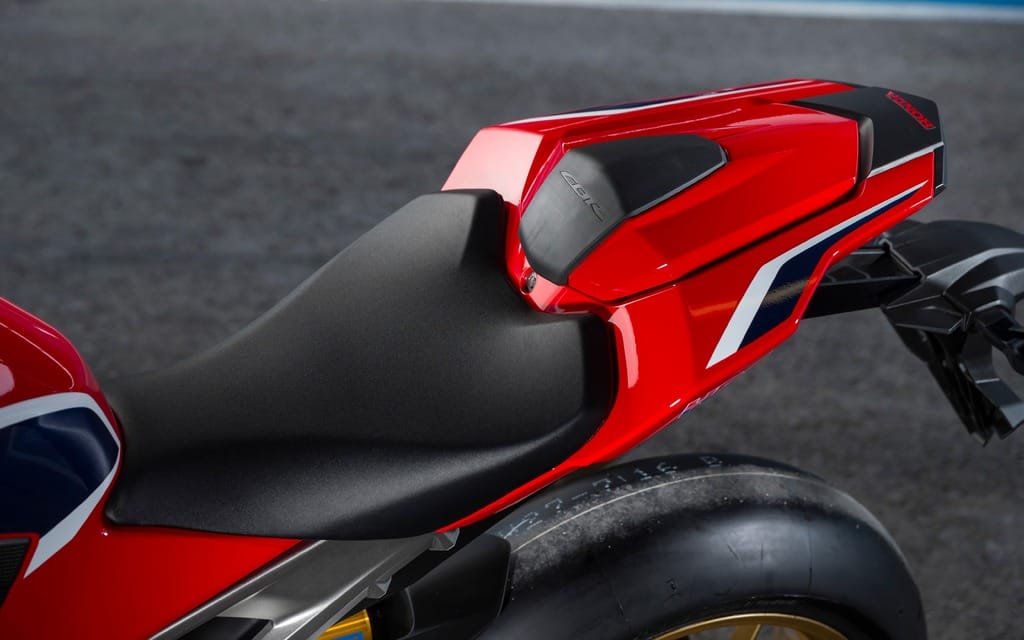 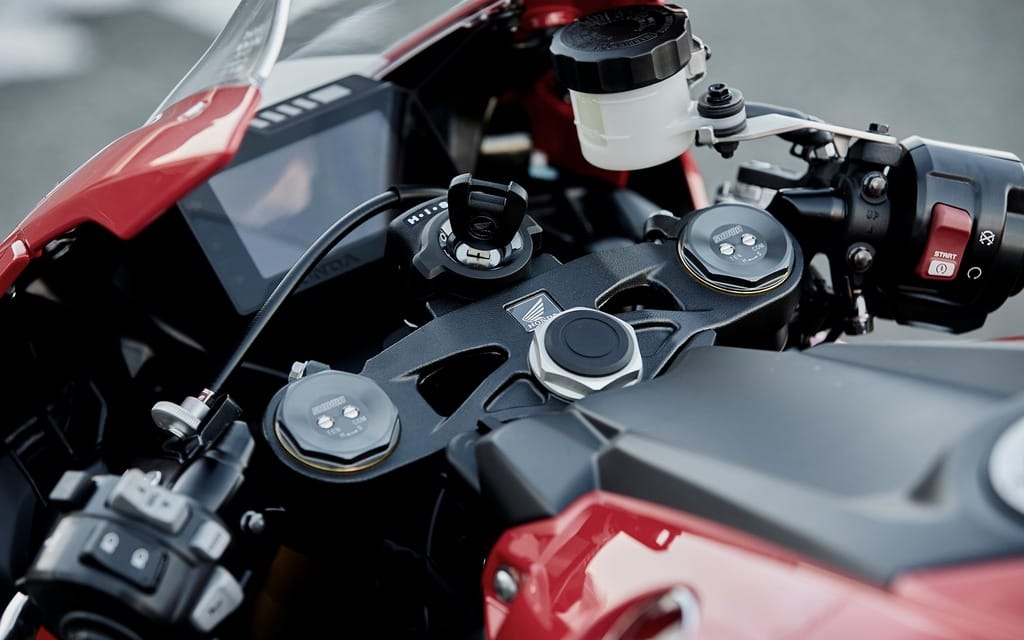 Honda’s revised ’Blade cuts deep, hard, and hot
My first-turn outbraking manoeuvre didn’t go according to plan, but it highlighted the new Fireblade’s ability—and it sure was a thrill. Storming down Portimao’s start-finish straight in the first session, I’d just experienced the familiar rush I recalled from riding other super-fast bikes here, as the Honda hit the crest and lifted its front wheel in fifth gear despite my efforts to pull my weight forward over its tank.

Several seconds later, with my head behind the bubble at about 270 km/h in top, I pulled out to outbrake a group of slower riders into the first turn, then got a shock as I realized that the lead guy, obviously showing a couple of Portimao novices the lines, was none other than Fast Freddie Spencer. There’s no way I was outbraking my all-time motorcycling hero here, so I flicked the Fireblade into the ample gap behind him, and took the third-gear right-hander with a surreal, close-up view of that famous red, white and blue helmet and matching leathers.

The fact that not only Spencer but also John McGuinness and several other factory riders were in Portugal for its launch was an indication of just how important this new-generation Fireblade is to Honda. And the way the comprehensively revamped Blade dealt so nonchalantly with my late change of mind and direction, staying pin-sharp and utterly unruffled into that first turn, said plenty about the agility and controllability of this long-awaited update to the famous line.

It’s not surprising that Honda has made a huge effort with this first significant redesign of the Fireblade in almost a decade. The firm has sold more than 470,000 units since the original CBR900RR FireBlade was launched in 1992, redefining super-sports motorcycling with its emphasis on compact size and agility as much as horsepower and speed. The Fireblade has even remained respectably popular in recent years, despite barely changing as high-performance motorcycling was revolutionized around it.

Now, with one giant leap, the Fireblade is reinvented for 2017, with more power, less weight and a high-tech electronics package at last. Or arguably with two or even three simultaneous leaps, because alongside the standard CBR1000RR Fireblade are a higher-specification, semi-active-suspension-equipped CBR1000RR SP, plus an exotic SP2 model intended primarily for racing.

The bare numbers put the standard RR back among the contenders: peak power up by 11 hp to a claimed 189 hp at 13,000 rpm, wet weight reduced by 15 kg to 196 kg, and power-to-weight ratio improved by a significant 14 per cent (65 per cent over the original CBR 900RR), giving by far the highest ratio yet from a Fireblade. Equally importantly, the new electronics package, incorporating Bosch’s much-used Inertial Measurement Unit, allows a nine-way-adjustable traction control, called Honda Selectable Torque Control, or HSTC.

According to Honda, 90 per cent of the standard and SP models’ components are new, which rings true in the Portimao pit lane as I climb aboard a Fireblade that has a familiar look but seems notably smaller and sharper. For the first two sessions we’re on the standard RR model, using the Bridgestone S21 sporty street tyres with which it will be delivered.

And as I aim fairly cautiously through the first few turns to warm the rubber and relearn the track, it’s clear that this bike is more light and manoeuvrable than its predecessor, despite nominally unchanged steering geometry. Even on standard suspension settings the Blade feels deliciously taut and agile, carving through the smooth Portimao turns with an ease and precision that makes it feel almost like a middleweight.

Its compact size won’t please every rider although I find myself less bothered by this than a couple of other tall riders. As with its predecessor and many other sports bikes, the footrests felt quite high—though not excessively so, perhaps because the seat is slightly higher than the old model’s. Some riders also felt the slimmer fairing compromised wind protection at speed, though I was fine provided I kept my head behind the bubble.

The Honda certainly made some serious speed on the straighter sections, accelerating like a crazy thing as the digital tacho jabbed towards the 13,000 rpm limit through the gears, and the titanium silencer shrieked a crisp, high-pitched and thrillingly loud accompaniment. This model’s extra heft is essentially at the top end, and it seemed both quick-revving and very smooth. But the Blade also charged out of slower turns, displaying sufficient midrange grunt to suggest it will make a sweet, rider-friendly road bike.

Its electronic additions will also help, not least the easily used choice of engine mode that alters power delivery at the press of the button on the left bar, but was not required at Portimao. I kept the bike in Track mode, and also stuck to that mode’s default traction control setting of two (out of nine), which gave a useful safety net without being intrusive, and was particularly welcome towards the end of my second session (the bike’s third), when the rear Bridgestone was slightly past its best.

It’s impossible to say with any confidence how the Honda will fare in a straight-line shootout against its rivals, some of which have a little horsepower over it, at least on paper. What’s for sure is that it felt eye-openingly quick, and wheelied over that heart-stoppingly fast crest with as much enthusiasm as Ducati’s 1299 Panigale had on its launch two years earlier. A couple of times the anti-wheelie software cut in abruptly, and even made the bike hesitate slightly after putting down its front wheel.

The anti-wheelie can be adjusted, but only by changing the traction control setting because the two are linked, which seems strange. I was also slightly disappointed that the Blade doesn’t have an easily used button with which to fine-tune traction control on the move, but its colourful TFT dashboard did seem very clean and intuitive. It features three display options, Street, Circuit, and Mechanic, the latter to provide servicing information.

The Blade’s acceleration was also enhanced by its quick-shifter, which incorporates an auto-blipper for down-shifts, and is standard fitment on the SP model but an accessory with the RR. It shifted very cleanly everywhere except, a few times, when declining to change down into one slow left-hander, probably due to my oversized boot not fully disengaging the lever. Honda’s system allows the rider to choose between three levels of sensitivity, a neat touch.

Handling was impressively sharp with the Showa units on standard settings, and better still after I’d firmed both ends slightly for the second session. The front end tracked accurately and gave plenty of feedback, and the rear remained well controlled and benefitted from tweaking to suit my relatively heavy weight. The Tokico front brake slowed the bike fiercely, too, although in a couple of places I was surprised to find the Nissin ABS system cutting in, probably because the rear wheel was lifting rather than that the front tyre was losing grip.

That suspicion was reinforced in the third session, which was aboard the Fireblade SP, whose semi-active Öhlins suspension firmed itself automatically under hard braking to keep the Honda very stable and to resist the ABS’s tendency to activate. If the RR had been delightfully responsive and agile, the SP was even more so and cornered even harder, especially because it was fitted with Bridgestone’s V02 slicks instead of the RS10s it wears as standard.

The soft and sticky rubber combined with the Smart-EC suspension to allow even stronger braking from the SP’s Brembo Monoblocs with less pitching and minimal ABS intrusion, though I’m still surprised Honda didn’t allow the anti-lock to be switched off. (A few of the fastest riders still had trouble with it.) And the Öhlins kit was seriously impressive too, both initially and even more so during the 45-minute afternoon session, which gave time for some push-button fine-tuning.

The SP felt very good in its first session with the suspension in Manual mode, which keeps the NIX30 fork’s and TTX36 shock’s damping rates constant, and allows fine-tuning by pushing the handlebar button rather than using a screwdriver. And it was better still after lunch, when we used the semi-active option, which monitors suspension movement 100 times every second and constantly adjusts damping levels to suit.

With this generation of Smart-EC, Öhlins and Honda have tried to make setup simple by dividing chassis performance into braking, cornering, and acceleration zones, and allowing push-button fine-tuning in each section. The SP felt so good straight away that I would have been happy to keep lapping just as it was, but I felt it would benefit from firming up slightly so came in and increased general damping levels at both ends.

This succeeded in making the Honda feel even tauter, but the firmer, higher front end meant that the bike didn’t steer so easily, and tended to run slightly wide. Back in the pits, the Öhlins technician took only a few seconds to soften the front slightly under braking only, which restored the sweet steering, this time with extra control.

That ability to change settings so easily and effectively was useful on track, and would possibly have been even more so if we’d had the chance to ride the Fireblade SP on the road, in which case a quick press of the button into “Winding Road” or softer still Street mode could instantly have tweaked both suspension and power delivery. The SP is expensive, costing roughly 25 per cent more than the standard RR (and about as much as Yamaha’s YZF-R1M) but it’s a seriously classy superbike.

And the standard RR, too, is a fine machine that puts Honda right back into the super-sport mix on both road and track. Compared to the outgoing model, it’s faster, lighter, more manoeuvrable and infinitely more sophisticated. Better still, it honours original ’Blade designer Tadao Baba’s legacy by impressing not simply with horsepower and pure speed, but with a balance and agility that should make it fast and fun in a wide variety of situations.