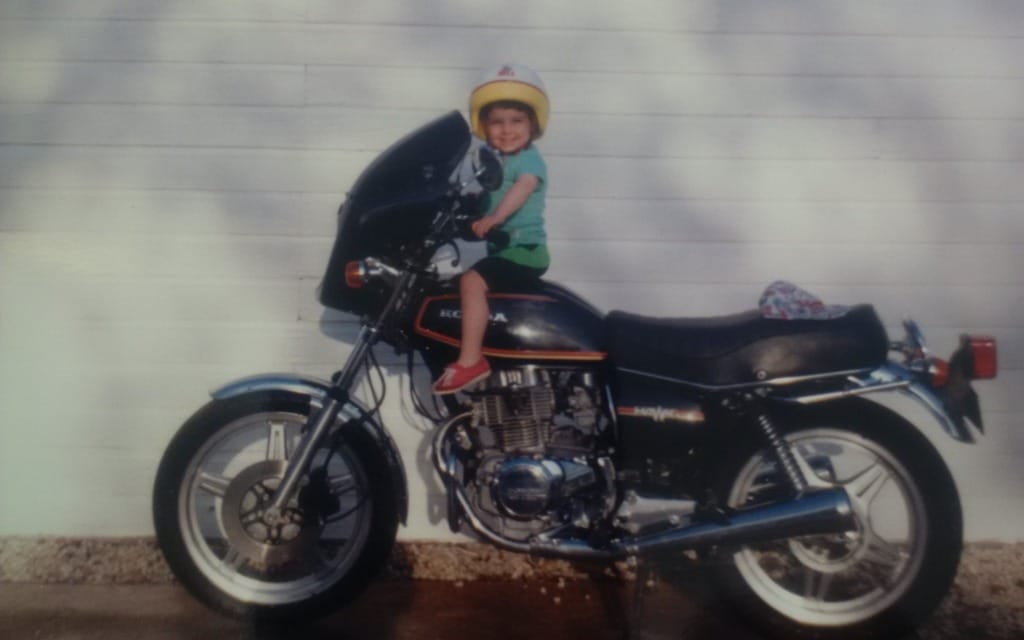 The old photograph of my son perched on the Honda Hawk reveals surprising detail and triggers old memories. I describe the image as a photograph because it predates the current digital era and narcissistic indulgence of the selfie. He looks about three years old and I estimate the date around 1990. Recent, by vintage-motorcycle standards, but much has changed in the world and my personal life since that day. I captured that moment in time with an old and likely cheap camera and a roll of Kodak film.

The Hawk was a 1979 CB400 and looks a lot better than I remember. It served as my Walter Mitty–like escape from reality during a stage of life that demanded my time and energy for a new family, home, and career. I would get up early Sunday mornings while my wife and son slept and head out past the city limits for a peaceful and sanity saving couple hours of riding before returning home to my waking family, who were none the wiser to my escape that included fantasy races against Eddie Lawson and Freddie Spencer on a GP track that in reality was provincial highway 200.

I have never owned a new motorcycle in my life. Money was tight for us in 1990 and taking out a loan for a motorcycle was out of the question in my self-imposed fiscally prudent thinking. This particular Hawk was found in the classified ads and was rescued from neglected maintenance and a couple winters stored outside and was one step away from a funeral march to a junkyard. I satisfied my joy of riding motorcycles by finding mechanically and cosmetically challenged bikes, and resurrecting them to a safe operating condition using sweat equity and self-education. The Hawk is not part of my current stable of street and race motorcycles, but it is an example of how I satisfied my desire to ride while building my young family’s finances.

How did I get that Hawk home? I tried to recall that as I gazed at the photo over 20 years later. I had no truck or trailer to transport the unregistered and non-running bike located at least a couple miles away from my home. The answer finally lifted from the depths of my long-term memory. I had pushed it down sidewalks and across intersections all the way home after filling the tires with air. I made it home after hours of pure physical exertion along with the angst associated with being spotted by a police cruiser that would certainly stop to harass me about the obviously stolen bike, or commit me to a psych assessment when I proved I owned the bike and actually initiated this journey on purpose. In hindsight the journey was simply an extension of my boyhood years spent pushing my Suzuki TM75 for miles through the city to find a place to ride safe from the police who harassed us if we crossed paths on our journey past the city limits.

“My co-workers think you are selfish,” said my wife after I brought the Hawk home. I paraphrase with cleaner language than the actual wording used by my now ex-wife when she told the ladies at work I’d bought myself a motorcycle. Surely I should have spent the $4,000 required to purchase a new motorcycle on furniture or appliances or at least a winter vacation. What they couldn’t comprehend was that I’d paid a couple hundred for the bike, fixed it with my own labour, and later sold it for a little more than I spent when my ex announced it was time to move to a bigger and better home. The Hawk was sacrificed to help finance the home upgrade and minimize the next mortgage. The Hawk is gone, the wife is gone, but the son remains. He is by far the best of the three. In fact the current wife shares my love of motorcycles and tolerates my motorcycle collecting so actually two out three remain.

I have long appreciated the skills and current quality of life that I enjoy in part from repairing and riding those “old” motorcycles. I am university educated and work as a health care provider, but my problem solving ability evolved from working on old bikes and cars in cold and dark garages with inadequate tools. My educated and well paid colleagues wish they had skills to fix things, but few would trade their free time and mind-numbing stimulation of an LED screen and the latest television series marathon for the mental and physical challenge of mechanical problem solving and the defeats and triumphs that develop your skills and wisdom. I tease my very smart son with a graduate degree in sociology that he is smart but not yet wise. He is the young boy perched on the fuel tank of the Hawk. That particular photo links my past, present and future and now shows me the value of escapism that I experience while wrenching and riding.

I recently returned to my frozen Canadian home from Florida following an obligatory annual meeting financed by my employer each winter. This year I declined my complimentary plane ticket and pampered laziness of organized travel. I drove solo to Florida from the prairies of Canada in my old 1992 Chevy truck (saved from the junkyard), an old converted snowmobile trailer and my Electra Glide in tow. I left the truck in Tallahassee and rode to the meeting on the Harley after touring Florida. On the drive home I visited the Barber Motorsport Museum near Birmingham, Alabama, and found myself standing in front of a real Eddy Lawson model Kawasaki. Eddie of course had signed that unmistakable green fuel tank with a black marker. I stood alone and silently absorbed the significance as only an aging motorcycle enthusiast could.

See you on highway 200 in a few months Eddie and be ready, I’m bringing my XS11.