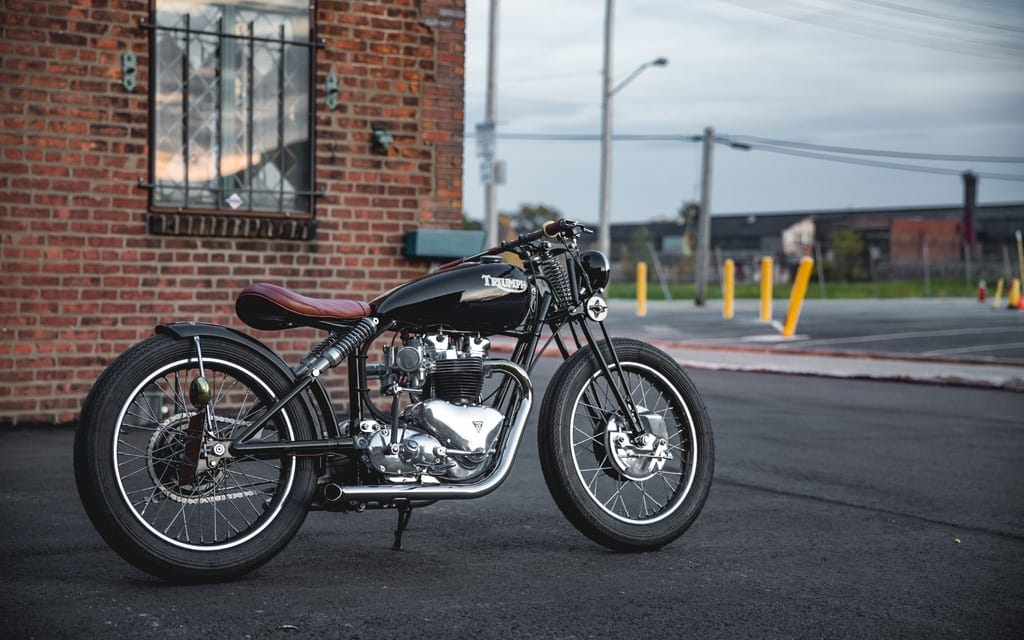 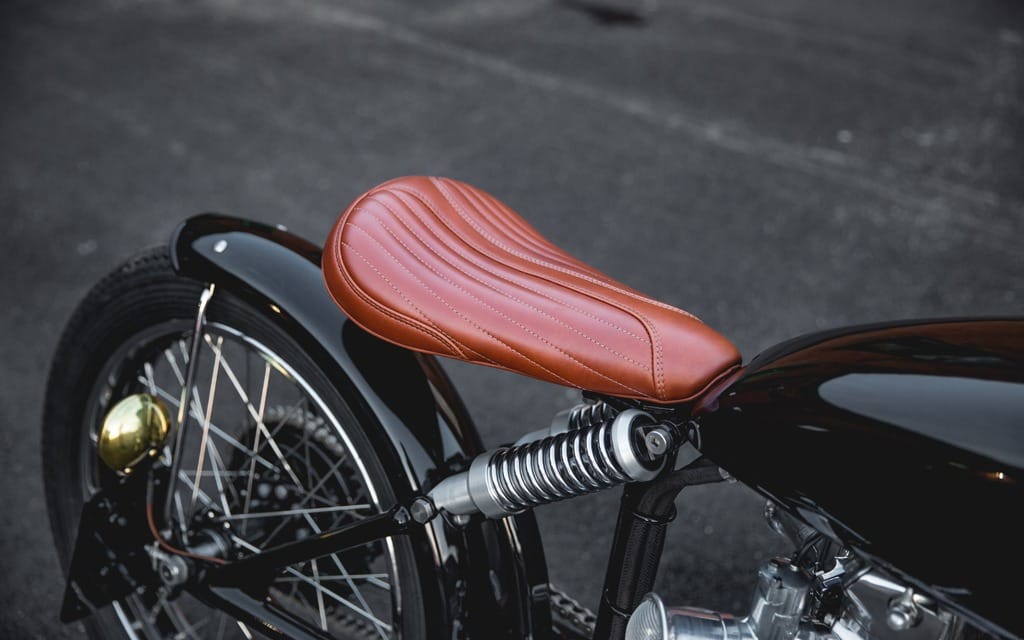 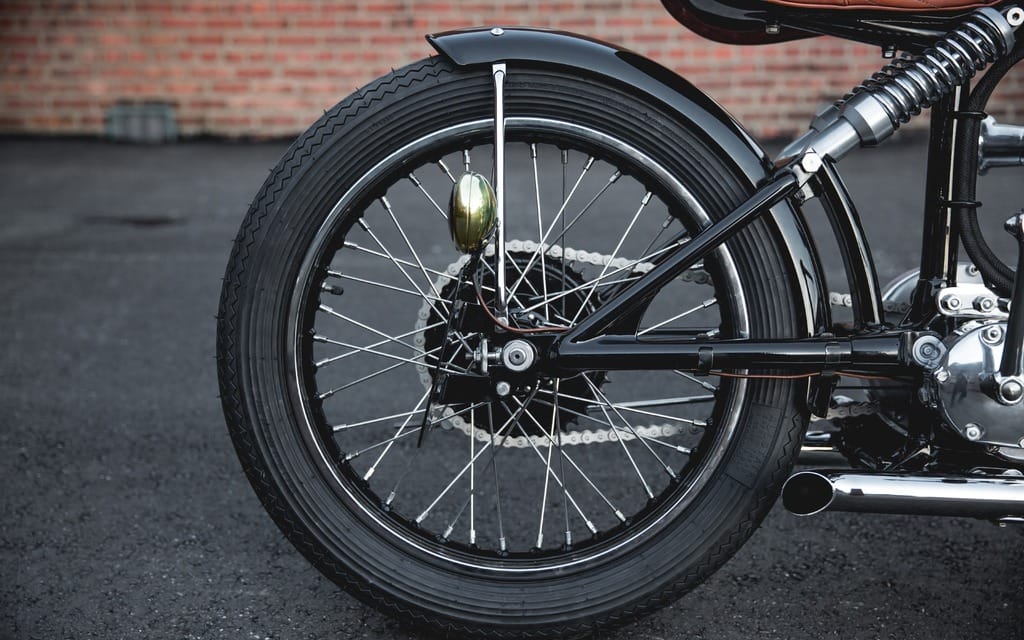 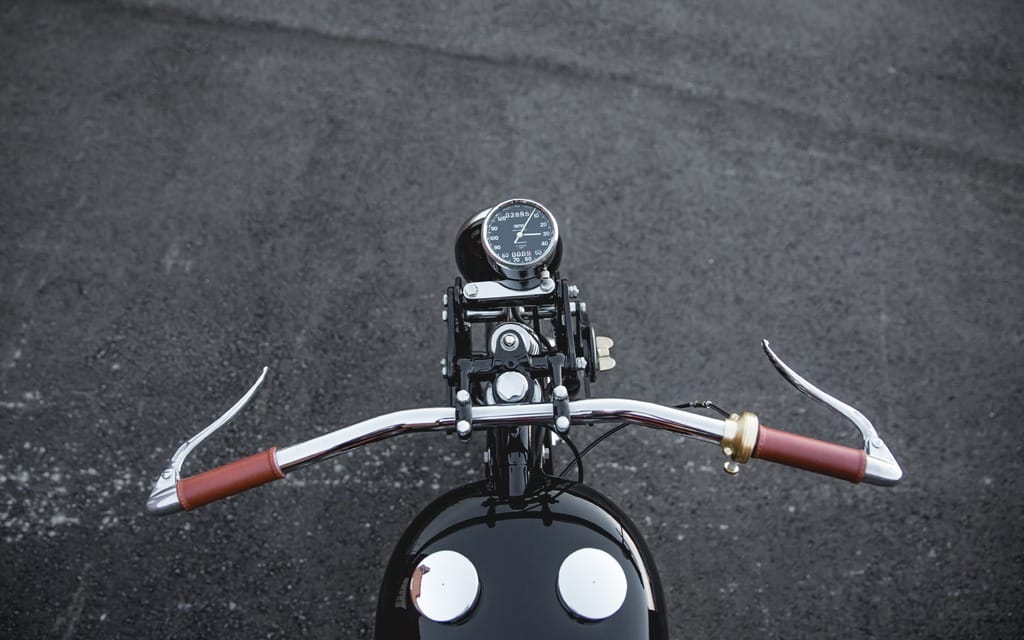 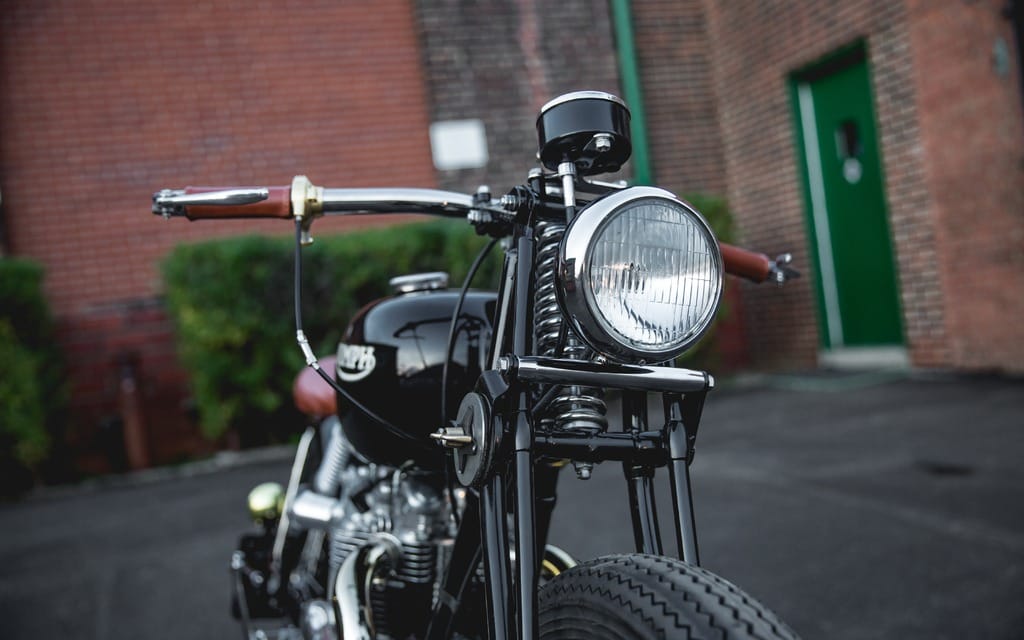 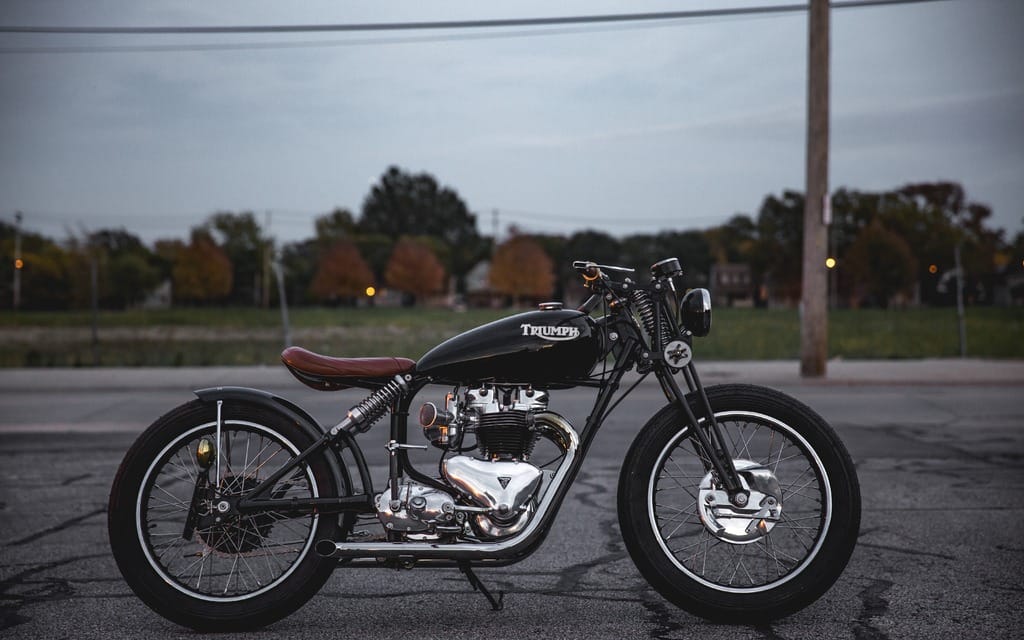 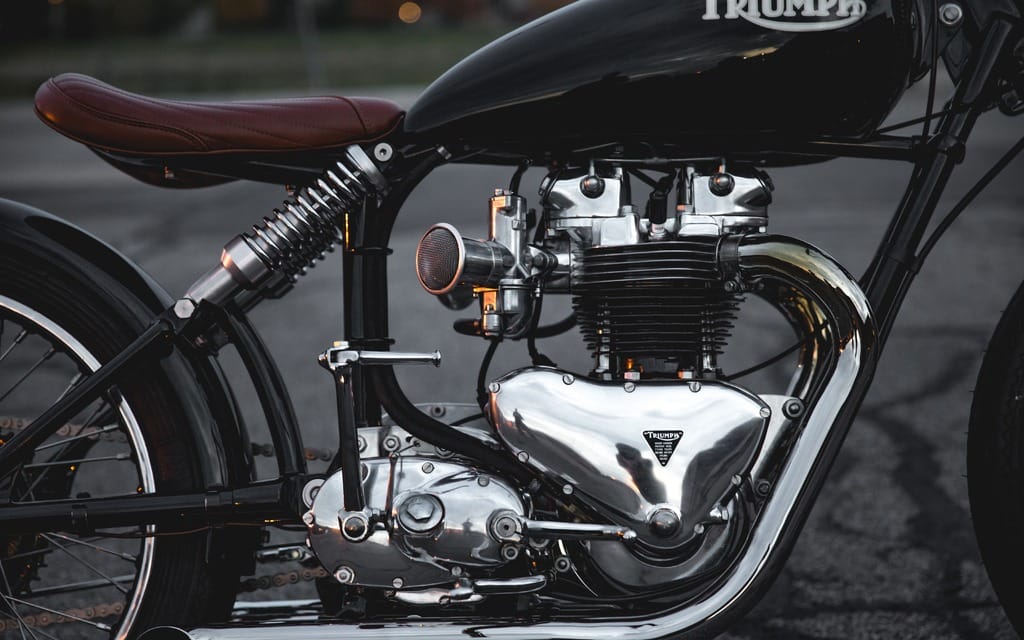 Vincent-styled Triumph from days of yore
By Martin Hodgson from Pipeburn.com

As far back as the time of Babylon and Ancient Rome, public auctions have been held to sell off the spoils of war, great art and some of the world’s most valuable items. In recent years auction houses like Bonhams and Mecum have seen motorcycles sold for insane amounts of money with vintage Brough Superiors, Harleys and Board Trackers fetching up to and over a million dollars. But an auction can also be a great place to buy a much cheaper custom bike with bargains to be had and rare gems on offer.

It was at one such auction in Las Vegas where Jesse Basset of The Gasbox met Kirk, a future client and owner of this 1960 pre-unit Triumph TR6 sprung bobber. Kirk was there to buy; in fact he was bidding on another of Jesse’s creations, a perfectly timeless Indian. But auctions can be cruel and the excitement can end in sudden disappointment – and that’s just what happened here. And although Kirk missed out on the Indian, his meeting with Jesse would soon yield some delicious spoils all his own.

Having been back home in Colorado for just a month and with the scars of the auction loss healing, Kirk gave The Gasbox workshop number a call. He knew what he was after and he wanted Jesse to work his magic and build it, a slick-as-slate classic Triumph. “The build started out like most; he wanted a rigid bike with lots of shine. But after seeing how nice the rebuilt engine and transmission looked polished and assembled, he asked if we could make it look like a Vincent,” explains Jesse about the unorthodox design process.

It all starts with the smooth lines of the original 1960 Triumph frame and swingarm. Both have been prepared to perfection, rid of any blemishes and coated in the classic black chassis paint of the time. To get the period look and some Vincent character the Triumph’s telescopic forks were ditched for a BSA girder arrangement.

“The girder had to be modified slightly, so we fabricated new links, a new damper, and custom brake stay for the Triumph full-width hub. The front hub is an early full-width piece but we wanted to run the later dual-leading-shoe plate, so we machined off the outer perimeter of the brake plate and modified the spacing.”

But it was the rear end that would prove the major work in the transformation of simple Triumph into vintage masterpiece. They knew the look they were after but there was simply no room for standard springs. Not wanting to stretch the swingarm or distort the dimensions, a unique setup was conceived. “I started by purchasing two Vincent shocks – these are just the shocks without and springs,” says Jesse.

“I then machined down the bodies and added threads to make them adjustable, and installed a new Harley springer spring. The lower caps can be tightened or loosened depending on the person’s weight. This gave the coil-over look we wanted and fit within the small space we had.”

The result is a superior version of the original Vincent Black Shadow style setup that has attracted loyal fans for generations. So it made perfect sense to complement the rear with a Vincent-styled fender that neatly hugs the tire’s lines. Like everything from The Gasbox the fender’s struts may at first appear simple but their fabrication, fit and finish is absolute perfection. The fenderless front end gives a far cleaner look than many original vintage machines with their unsightly large guards. The workings of the BSA girder have been painted, polished and chromed to ensure there is as much to catch the eye on the front as there is the rear.

The gas tank might look like a totally stock item but Jesse has plenty of tricks up his sleeve. With the Vincent storing its oil in the frame the design called for no visual oil tank. Vincents also have a generous amount of sheet metal in their tanks and it was something Jesse and Kirk wanted to capture. “We wanted the look of a large fuel tank.” To get the best of both, the tank was fabricated so that the left side stores the fuel, and the right side, the oil. This is achieved while still maintaining the Triumph’s internal plumbing arrangement.

With the flawless metal work finished it was time for paint and nothing says Vincent like black! The incredible depth to the classic hue cannot be overstated, it might be a solid colour but it reflects the light like a disco ball. The Gasbox crew has never gone for crazy paint or graphics but the Triumph logo by Aerografix gives the perfect look. It’s exactly what you used to see on the very best high-end, vintage, British hand-built machines. The rich black has been applied to every surface that doesn’t have a mirror shine with one notable exception.

Rather than fit a long two-up Triumph seat the Vincent styling continues with a bobber styled piece that floats over the rear guard. The brown leather work by Union Speed and Style is simply phenomenal and classic in design. There is more leather up front with Kirk insisting on vintage inverted bars, with matching hide grips. The flat bars in a chrome finish are just what the doctor ordered and the brass throttle assembly is the perfect touch. The minimalism continues with a vintage Smiths gauge cleverly mounted to the upper link of the girder.

Engineering minimalism doesn’t get much better than a classic pre-unit vintage twin cylinder from the Brits. Modern engines with their compact integrated gearboxes, intelligent electronics and rare materials might make bulk power and run like silk. But they lack a certain je ne sais quoi that is the raw mechanical symphony of an old power plant. Both engine and gearbox have been completely rebuilt so Kirk can enjoy trouble-free Sunday rides. The twin Amal carbs look just as good and gulp their air through a set of polished and meshed velocity stacks.

With the polished lump in the blacked out frame The Gasbox fabricated a stunning twin pipe exhaust system that looks as good as it sounds. Its ends vent the gases away from the rider’s feet, which now sit lower thanks to a set of one-off pegs. The standard foot controls have been lowered and set further back for an improved riding position. Being kick-start only and right foot shift means you ride the vintage way to match the styling.

The lighting is classic front and rear, with the smaller diameter headlight reminiscent of the sporty Vincent look. But even the minor details Jesse goes out of his way to get just right; the wiring for the brass rear light is shielded in a copper tone to take on the appearance of an old fuel line. So it makes perfect sense that the rubber is straight from the vintage experts at Allstate Tires in the Safety Tread style. Both wrap around 19″ rims front and rear, a one-inch increase at the back, for a perfectly flat stance.

With a pair of chrome filler caps fitted up and the axle mounted license plate holderbolted on Jesse could kick the old girl to life. It’s the best of British with a Triumph base, Vincent theme and BSA girder front end all melded seamlessly into one timeless package. Kirk always wanted a classic bike built by the masters of old school cool at The Gasbox. He may have missed out on the Indian at auction, but when the hammer dropped on the Triumph build it’s clear Jesse ensured he still walked away a victor.