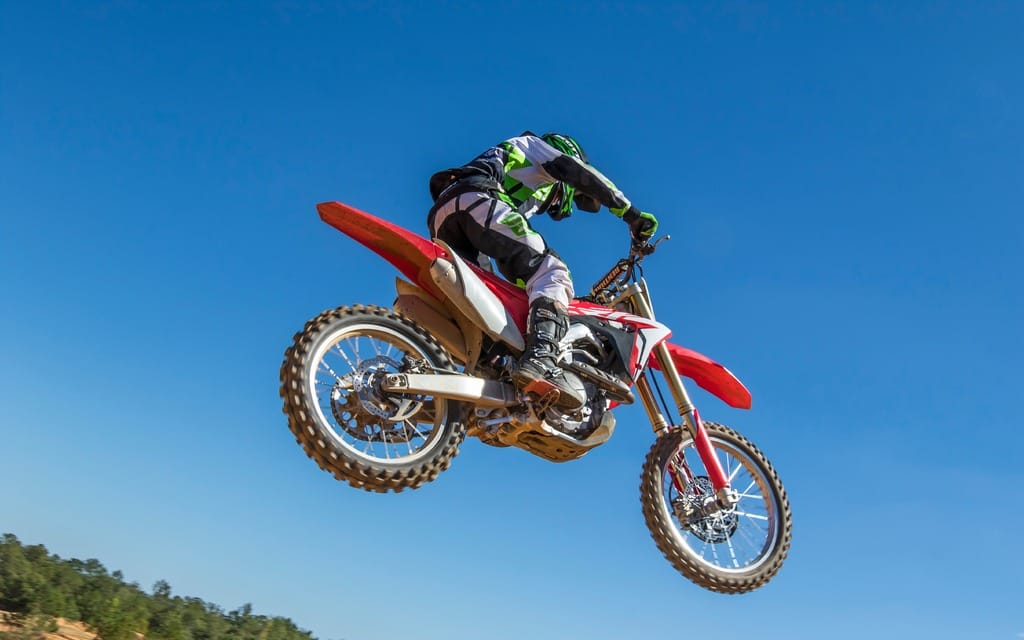 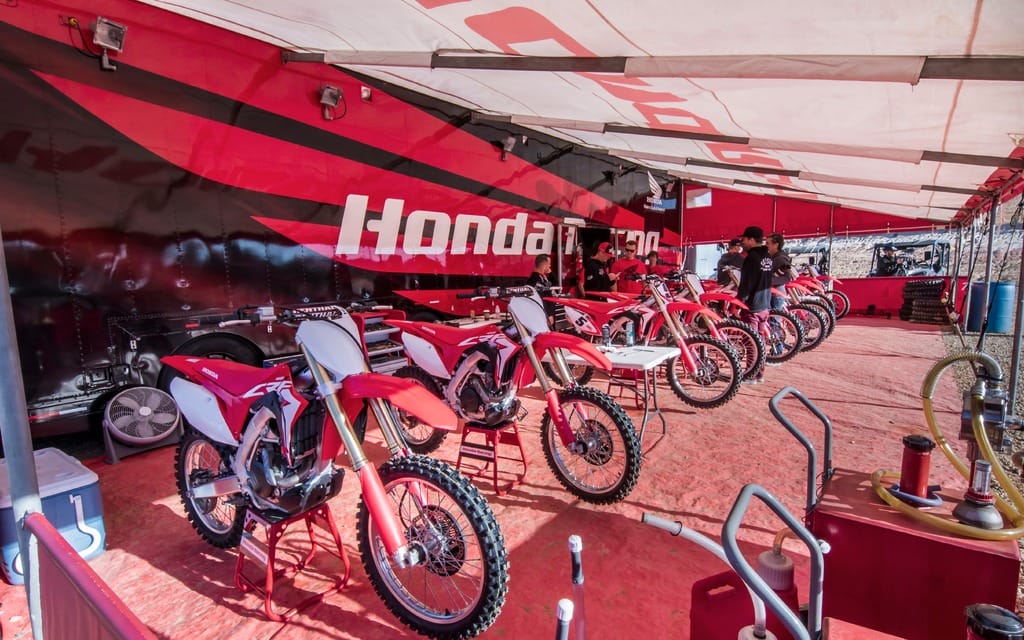 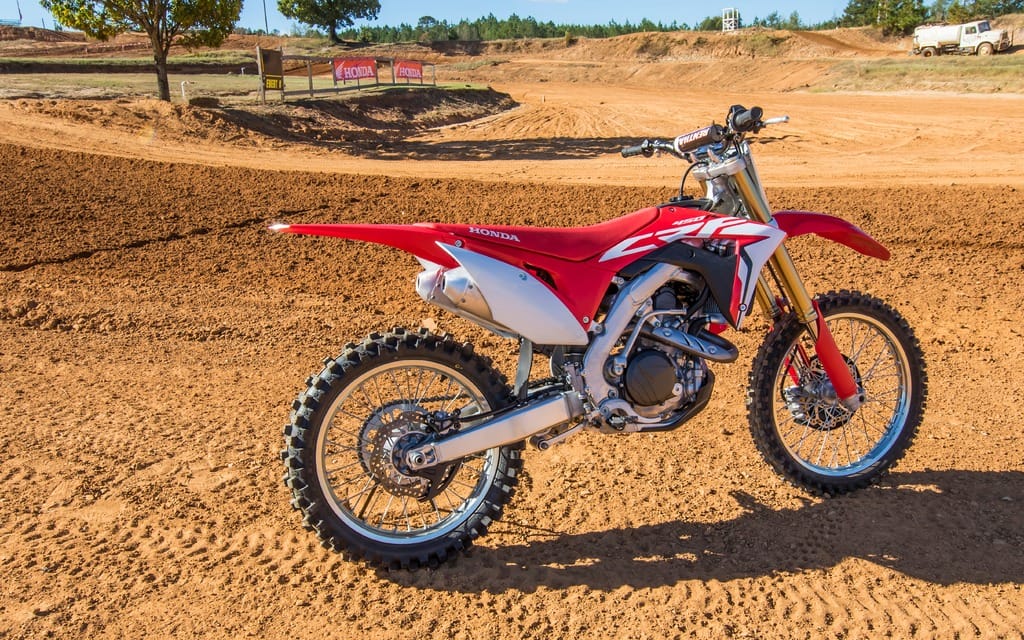 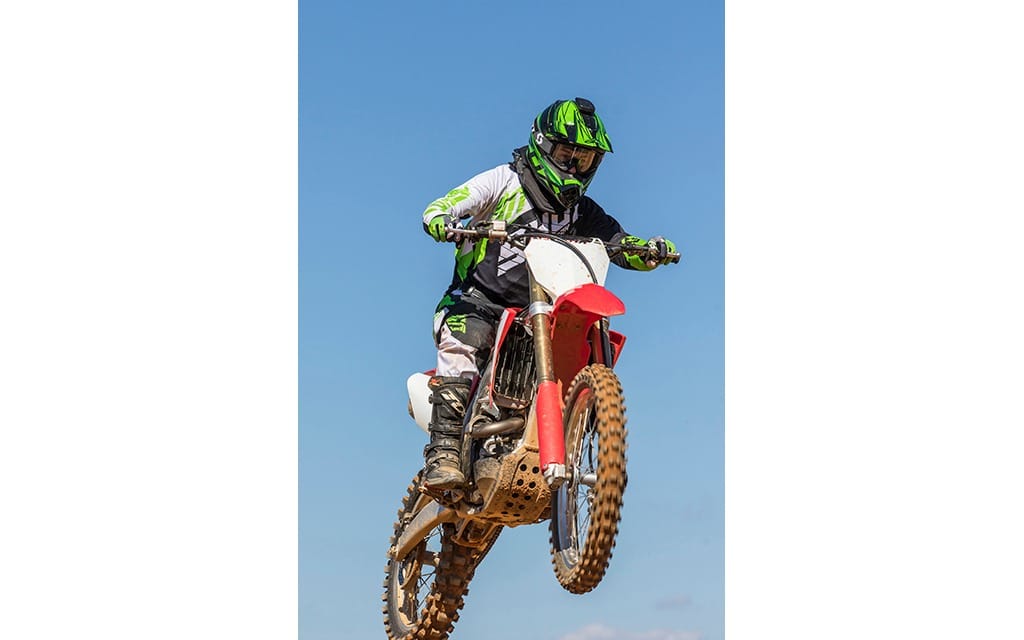 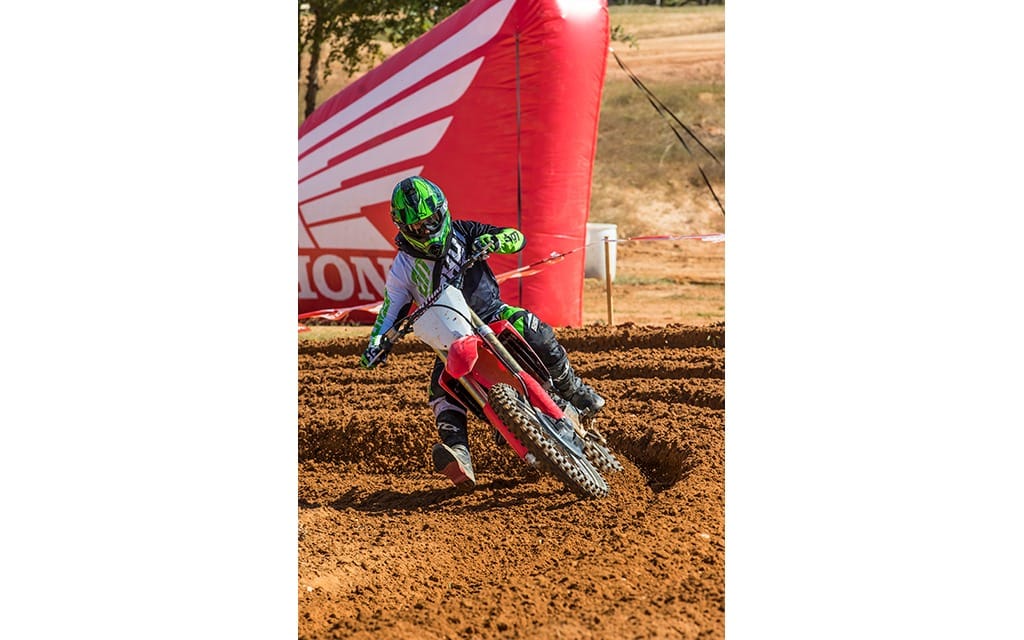 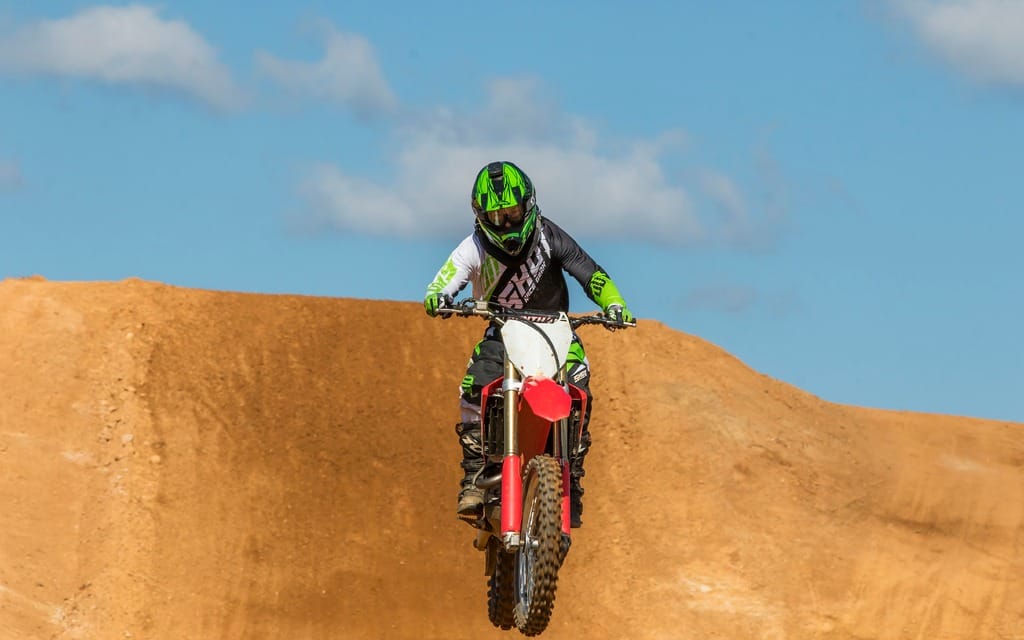 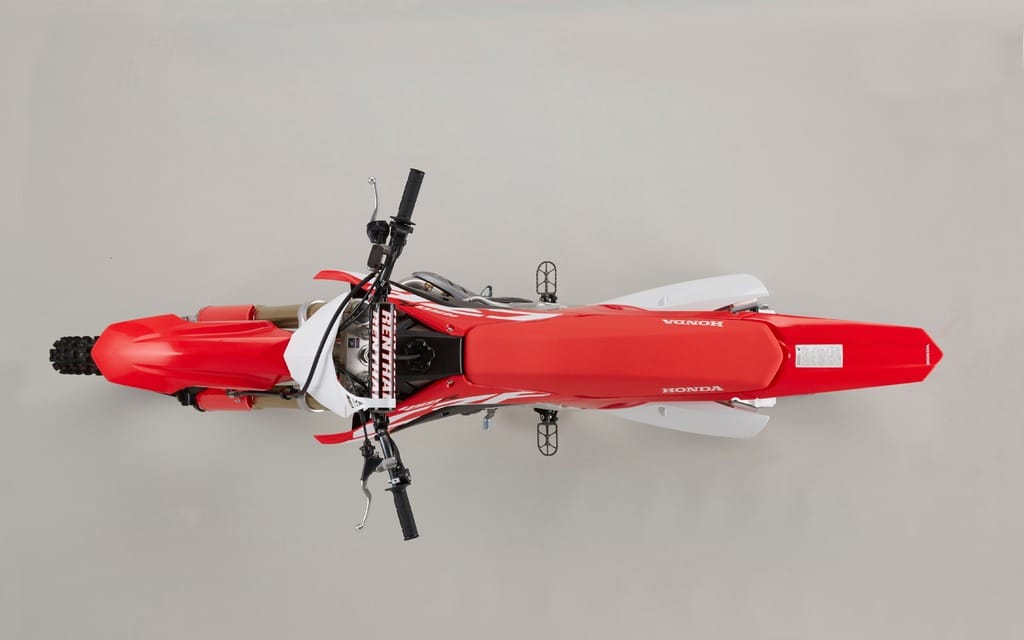 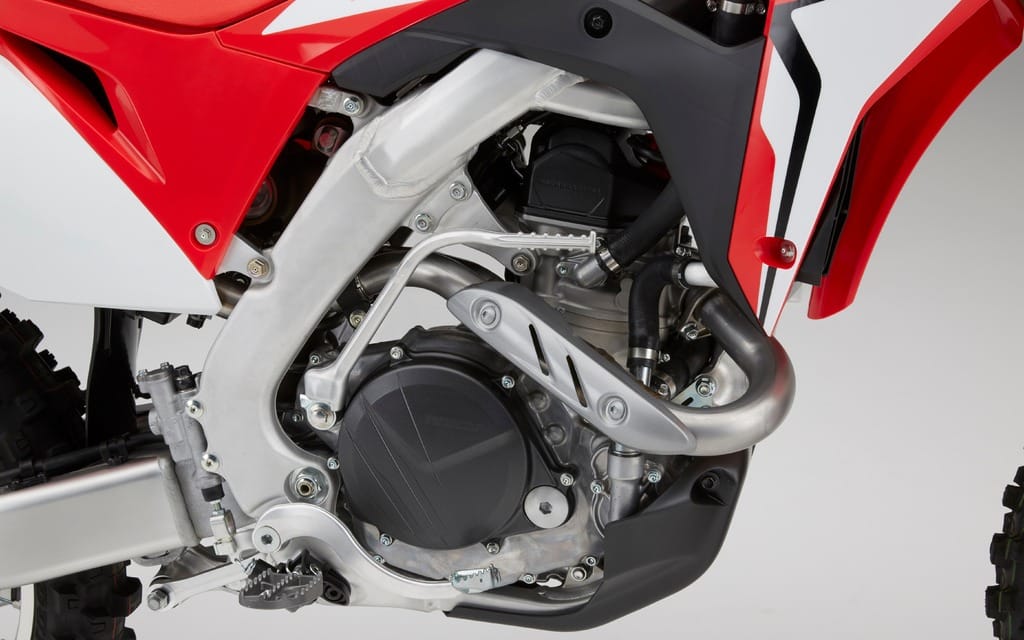 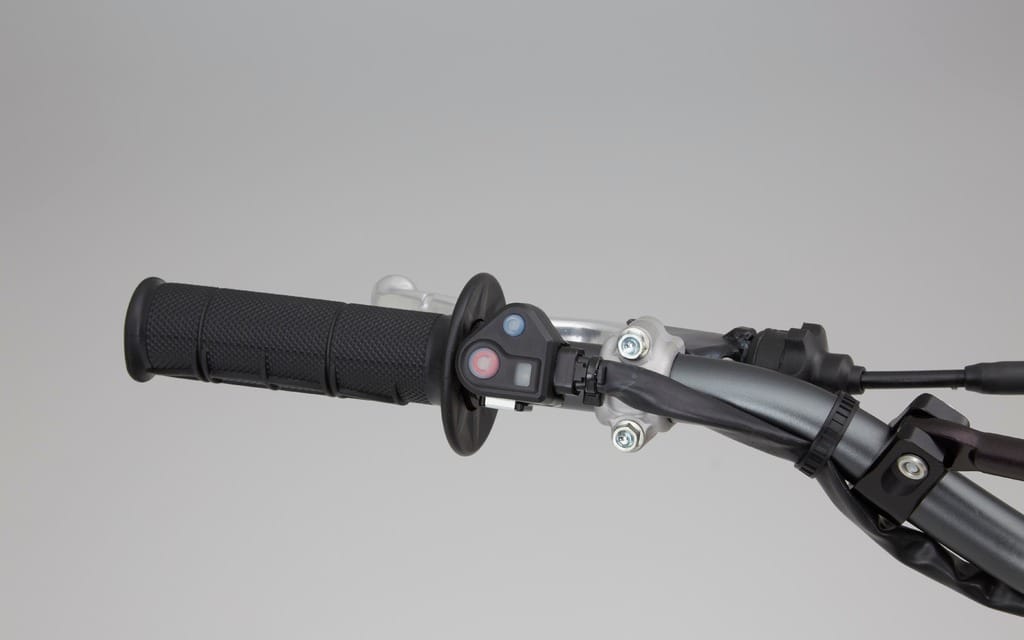 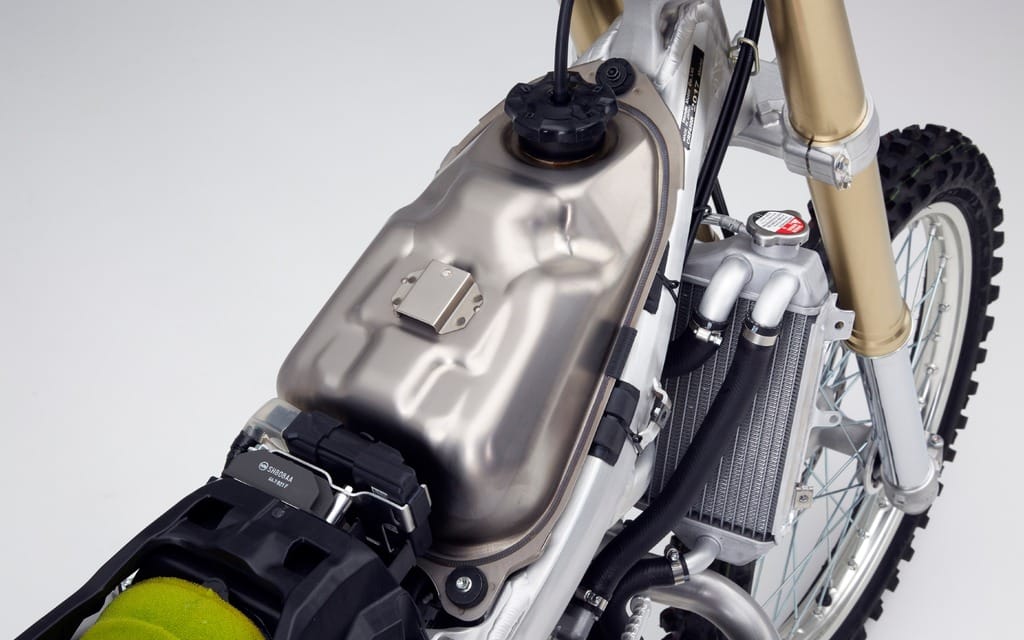 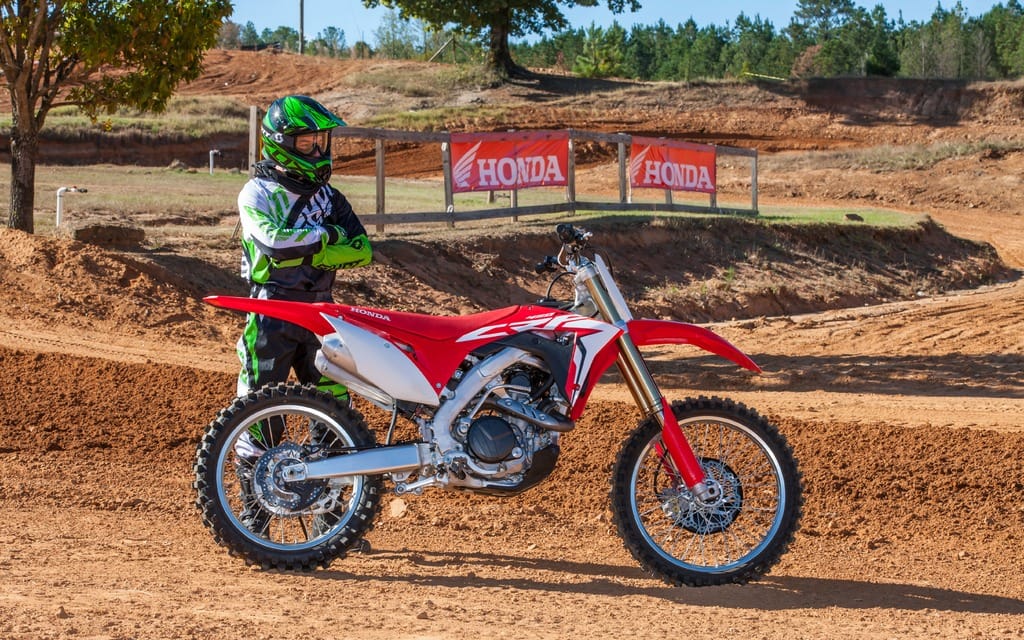 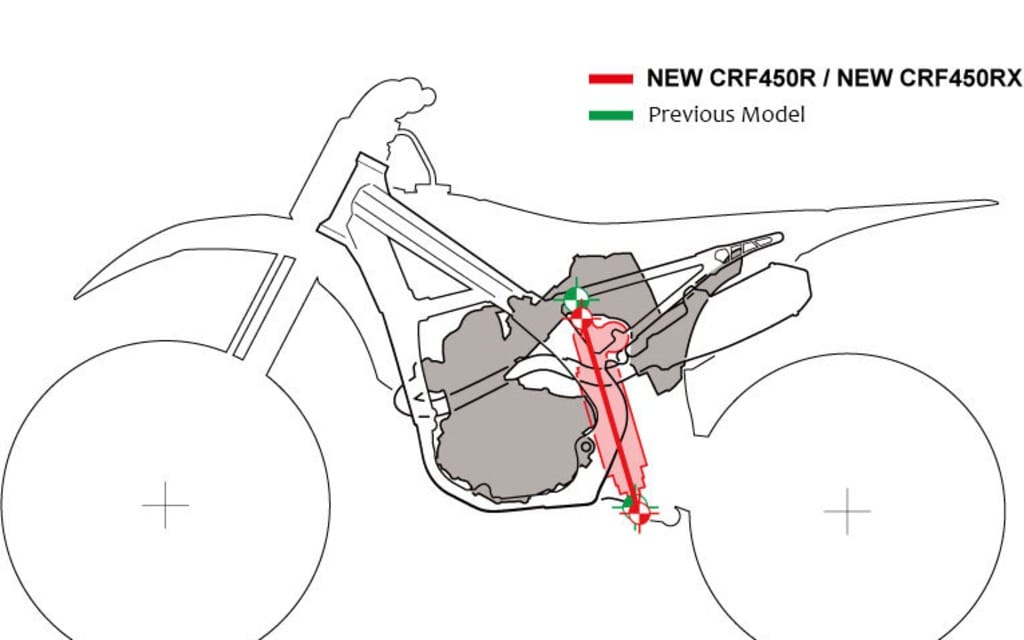 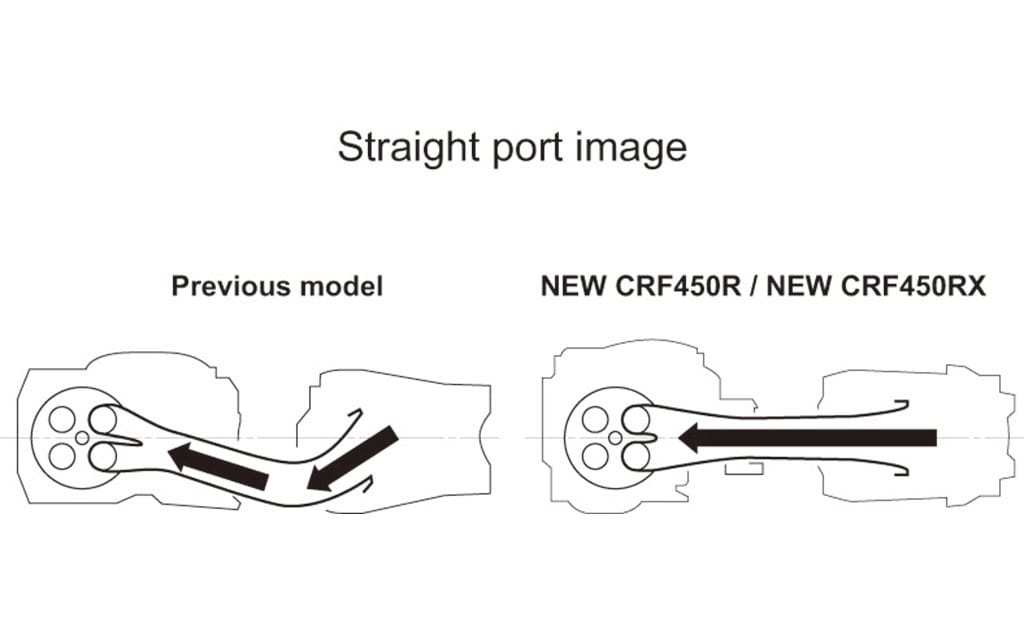 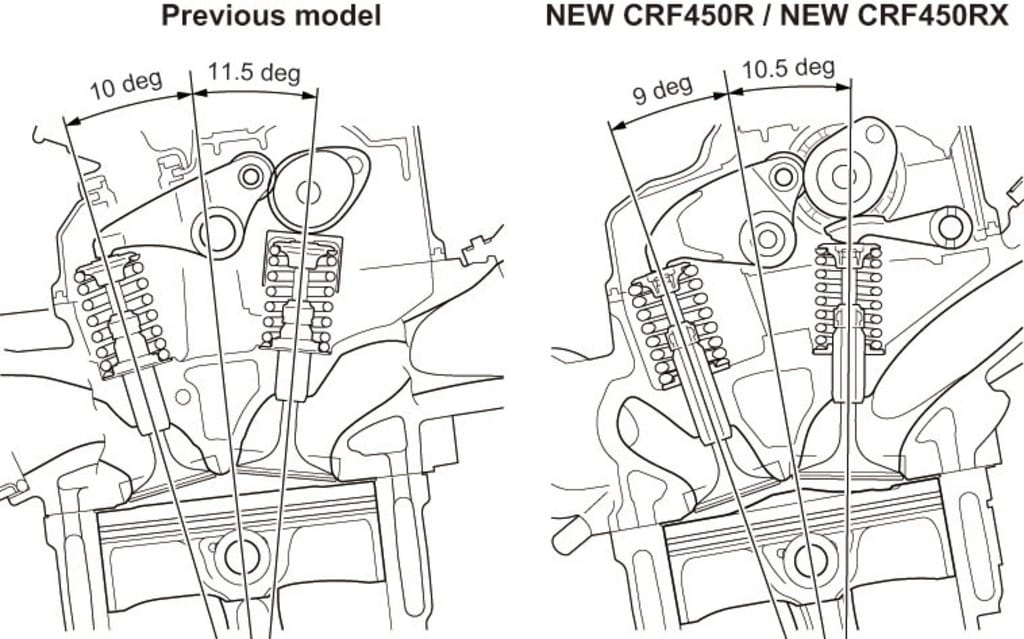 Motocrosser aims at the perfect holeshot
By Guy Caron

The fifth generation of Honda’s CRF450R, originally released in 2002, is a completely new motorcycle. Bold new graphics and a few changes would not cut it; it was time for a total redesign under the guidance of Mikio Uchiyama. With his team he came up with the Absolute Holeshot concept and went to work on it from a blank computer screen. “The start in motocross is of utmost importance. A lot happens in the first few metres and that impacts the race results heavily,” says Uchiyama. “And from every turn it is also a matter of accelerating quickly.” More overall power, especially in the lower rev range, better traction, and a lower centre of gravity to make better use of the first two attributes were the goals Uchiyama and his team wanted to achieve with the new CRF.

While the new Unicam motor retains the same bore and stroke at 96 x 62.1mm, everything else is new. The cylinder head has a narrower included valve angle that, along with a new piston, raises the compression ratio from 12.5:1 to 13.5:1. The shallower combustion chamber combines with better cooling of the piston from a new four-hole oil jet underneath to make the higher compression ratio possible. Two-millimeter bigger intake valves, now 38 mm, are actuated via finger followers, instead of directly under the cam lobe, to allow higher lift and a more radical cam profile. DLC (Diamond-like Carbon) treatment on the followers and the piston pin reduce friction and ensure durability. Oval cross-section valve springs allow a more compact valve-train. The intake tract is now of the downdraft design to improve breathing. To achieve a straight path for the airflow, the airbox is now going over the rear shock, instead of around. New crankcases place the balancer shaft closer to the crankshaft that drives it directly. The lubrication is now by a dual-stage scavenger pump, also driven directly off the crankshaft, to reduce pumping loss. It pressure feeds the transmission with the same oil as the motor, so no more separate oil for each, simplifying maintenance as well as diminishing weight. Spent gas routing is also revised. New port shape and smoother bends on the exhaust system, which retains the twin mufflers, improves the pumping efficiency of the high-compression mill. The clutch is slimmer, shaving two millimetres off the engine width with fewer, more resistant clutch plates.

An electric starter is optional and can be mounted while retaining the kick.

As with the motor, everything on the chassis was revised with a view toward improving the ability to put the newfound power to the ground better. The lighter frame, with a different geometry and revised lateral stiffness, matched to a shorter, lighter swingarm aim at improving cornering feel and traction at both wheels. The shock mount is 39 mm lower than on the previous model to make room for the downdraft airbox that runs over it. The linkage also migrated downward. The fuel tank is lower in the frame and now made of titanium. The new sub-frame, flatter seat and plastics with moulded-in graphics combine with the footpegs positioned farther back to alter the riding position. The big news on the suspension side is the switch to a Showa spring fork from the KYB air fork used since 2013. Stanchion diameter grows one millimetre, to 49mm, with internal circuits similar to the A-kit factory fork used by many top racers. The spring-equipped fork is heavier but the weight savings on the chassis and engine leave the 2017 CRF450R at 110 kg with a full tank, same as the 2016 version.

So, what is the new red bike like? In a word (or two), very good. We had the Monster Mountain MX Park track in Alabama prepped to perfection and a mechanic for each tester to look after our requests. Colton Facciotti and Andrew Short were on hand to ride with us and remind me what going very fast on a motocross track looks like. After gearing up and having Jason set the sag at 105 mm I’m all set to head out on the new machine.

I need a few kicks to get it running; using all the stroke of the lever is required to fire up the new higher compression motor (Honda did not have any bikes equipped with the optional electric start at the launch). At idle the lumpier cam, 13.5:1 ratio, and new intake give an audible hint of what’s to come. The fuelling is clean across the range, in every situation: throttle response is crisp and sharp without being twitchy. I start my day on the standard mode out of three available, cutting the difference between the mellower mode two and snappier mode three. The power comes strong right off the bottom-end into a very potent midrange. The CRF now pulls farther on top; I can easily hold a gear to reach the next corner and save an upshift. A much different feel from the previous motor that did not deliver anywhere near that level of flexibility and all that power comes in a very tractable, manageable way with no hard hits anywhere.

My first few laps on the virgin, sticky red clay track are used to get acclimated to the layout and the jumps; I feel right at home with the ergonomics of the CRF. The sensation of sitting on top of the bike with the five-millimetre higher seat and the footpegs moved a bit rearward, the feel of the front end and the balance of the set-up give a great feel for traction from both ends. The front wheel is planted and provides precise feedback into corners, flat or rutted, allowing me to pick any line with assurance. The new seat and radiator shrouds let me move forward easily and make the bike feel just right between my knees, not too wide, and easy to hold on to.

There is something about the mass-centralization, frame stiffness and weight distribution that must be working good here; I get great traction at either end and a much better feel for it. In the air the CRF is light and flickable. I’m not of the scrub generation but I can put the bike where I want. The suspension is compliant over the small stuff and can cope with my clumsy landing as I try to learn the new track. If I come up short on a table top or fly a few bike lengths too far on the doubles there is good bottoming resistance from both ends. The Showa spring fork especially shines, as is expected from factory-team derived hardware. Supple and easy on my wrist, making small bumps disappear and coping with g-out—it’s brilliant! The fast sections let me rely on the newfound stability to keep my heart rate in check.

I switch the engine mapping to the smooth mode after the ruts develop later in the morning. Just hold the blue button on the left bar for two seconds with the engine running, no throttle, and the LED light blinks to confirm the change. The smoother initial response lets me roll on the gas earlier and helps me access the strong power earlier with some finesse. The conditions are so good that I decide to cut a few laps on the 2016 model that’s available for comparison to make sure it’s not just the incredible track preparation that makes the new CRF look so impressive. The 15 minutes spent on the previous generation machine just confirms my impressions: the 2017 is stronger across the whole rev range, feels crisper and is just as easy on my arms. The suspension, mainly the fork, and the new frame, weight distribution and riding position find traction where the old bike feels loose and sketchy. I go straight back to the new and improved CRF450R to spend the rest of the day happily going faster, with less effort.

So Honda went all-out to bring the 2017 CRF450R to the front of the motocross hierarchy and that press launch with the project leader from Japan here to greet us is proof that they take it very seriously. Their effort to come with a winning machine for the fifteenth anniversary of the model that was dominant in the market some years ago is definitely a big step toward regaining that glory. Without comparing head to head with the competition it’s hard to know how it will fare against them, but I can tell you without doubt that no one will be disappointed with this new Honda. A faster motor, sweet suspension, handling that inspires confidence and a light feel combine to make a CRF450R that is less tiring and easier to ride fast. What’s not to like about that Absolute Holeshot thing?