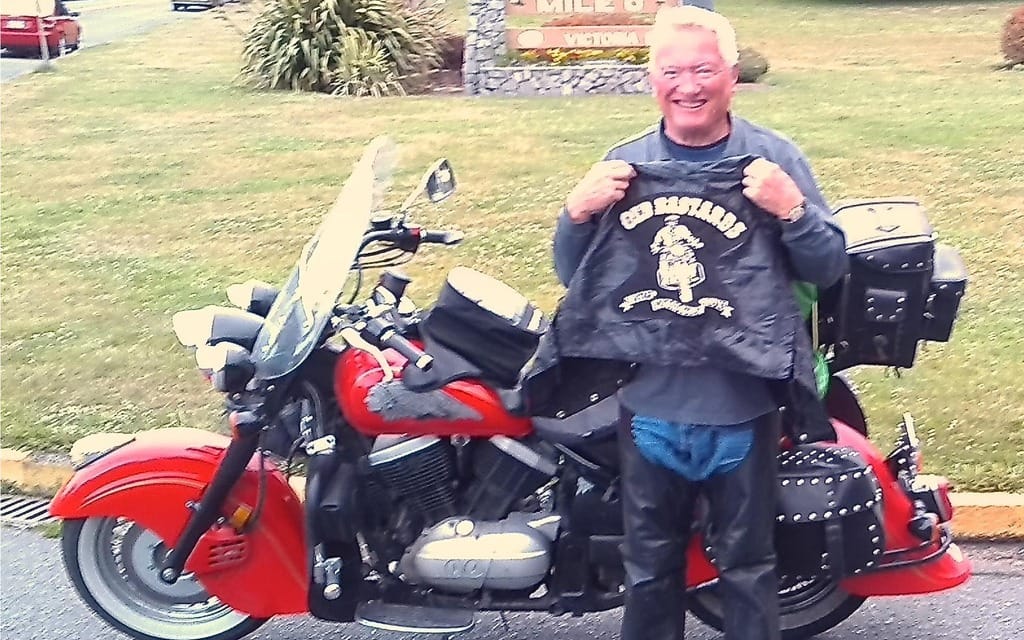 Bruce Jenks and I are members of the Old Bastards Vintage Motorcycle Club, founded in Bastard Township, Delta, Ontario. We are Northern Old Bastards or NOBs; I am from Arnprior, and Bruce is from Renfrew, right in the heart of some of the best riding roads in Ontario. At 73 and 75 we are both old but only our wives would call us vintage. At a Christmas party last year Bruce mentioned that a ride to the west coast was on his bucket list, and as it was on mine as well, we started planning. My ride is a 1999 Kawasaki Drifter and Bruce has a 2008 Harley Electra Glide Ultra. I have owned the Drifter since new; it’s a bike I fell in love with the first time I saw it on the cover of Cycle Canada in February of ’99. At the time CC said it would become a classic and it has, and I have a garage full of trophies to prove it—well maybe not a garage full, but I do have six.

Over the years my wife and I have been to Nova Scotia, P.E.I., Mt. Washington, Americade, Friday the 13th and countless other rallies and events. I also did a one-up trip to James Bay, all on the Drifter. and now it was time to go west. When the bike went in for service, the service writer asked me where I was heading; when I told him Victoria he said that an 800 was too small to take touring. How things change. My first bike was a 250 Triumph that I never thought of as small. In Zen and the Art of Motorcycle Maintenance Robert Pirsig’s bike was a 305 cc Honda Super Hawk. The poor service writer is probably still waiting to buy his touring bike but I have always said go with what you have or don’t go at all. I don’t think that I have ever been on a trip or ride without someone coming over and complimenting me on my great-looking Indian; in fact it happens so often that I no longer bother correcting them. I love it when people walk past a Harley to look at an old Kawasaki Drifter.

Both bikes performed flawlessly for a trip of just over 10,000 kilometres. We were gone for 15 days and had 12 days of riding. Going west we had two days of over 1,000 kilometres and otherwise we usually rode about 700 kilometres each day, which was away over my expectation of 500 per day, which I average when my wife is sitting behind me. On the 1,000-kilometre days we ate supper standing up, but the other days were a breeze.

Bruce talked me into buying an electric vest before we left, and what a great investment that was, especially through the mountains and two days of nine-degree weather with rain from Winnipeg to the Sault; it kept me warm in the worst of weather. The only downside was sometimes I would just get too cozy and I would start to nod off; eventually I had to alternate between freezing to stay awake and then turning the vest on for short periods to warm up.

What were the highlights of the trip? Well not the rain from Thunder Bay to Winnipeg or from Edmonton to Kamploops. It was certainly not the West Edmonton Mall that Bruce’s wife insisted we couldn’t miss, it wasn’t the flooded highways in back country Saskatchewan or Bruce’s complaints that Harleys don’t float. It wasn’t the buffalo, the elk, the mountain goats, and the grizzly bear that watched us from the side of the highway, or even the deer that calmly stepped out in front of us just outside of Revelstoke (thankfully he was alone because we never could have missed a second one). It most certainly wasn’t the huge traffic jam and close calls with impatient drivers at Lake Louise.

Almost highlights were the Yellowhead Pass and Rogers Pass with snow at the side of the roads and cliffs on one side with mountains on the other. The ferry to Vancouver island was worth every penny, the beautiful cowgirls and the chuck wagon races at the Calgary Stampede were close as was getting our picture taken at Mile Zero of the trans-Canada in Victoria, but my first highlight was arriving at my daughter’s doorstep in Edmonton on a motorcycle, followed by having a personalized tour of the Edmonton Zoo including a behind-the-scenes tour at feeding time with the red pandas (the tour guide was my grandson Justin who was spending his second summer at the zoo). I had a chance to say goodbye to my other grandson David before he left for a year-long student exchange in Japan, and goodbye to my daughter Michelle before she left for China on a teaching exchange.

The next highlight was arriving at my granddaughter Emily and her husband Matt’s house in Calgary. Emily likes to tell everyone that she grew up on the back of my motorcycles and she was my favourite passenger, I like to tell everyone that she is my favourite granddaughter (she’s my only one). Emily got her motorcycle licence this spring and she is the proud owner of a 2007 Triumph 800. Matt, a longtime rider, has just taken possession of a custom 1968 Triumph 650. One of my plans was to ride with my granddaughter so I sat down with Emily and explained that as a new rider she shouldn’t try to ride beyond her abilities with more experienced riders. When we left Calgary Matt asked Emily to lead. Well, guess who had trouble keeping up (it wasn’t her!).

I couldn’t have asked for a better riding buddy than Bruce. We hit it off with our riding styles, our endurance and our sense of humour. One more item gone from our bucket list.