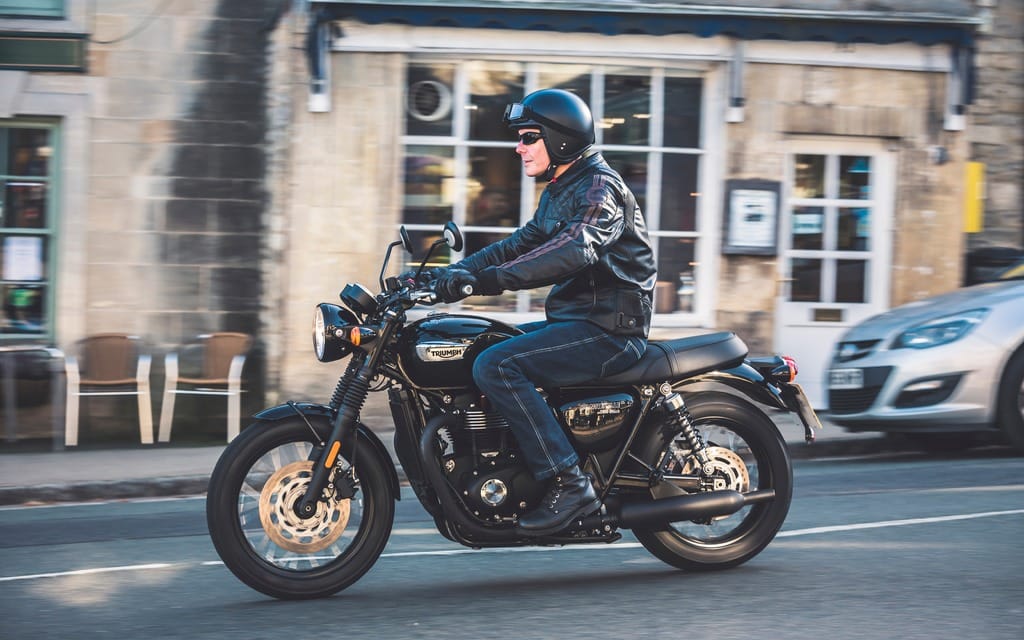 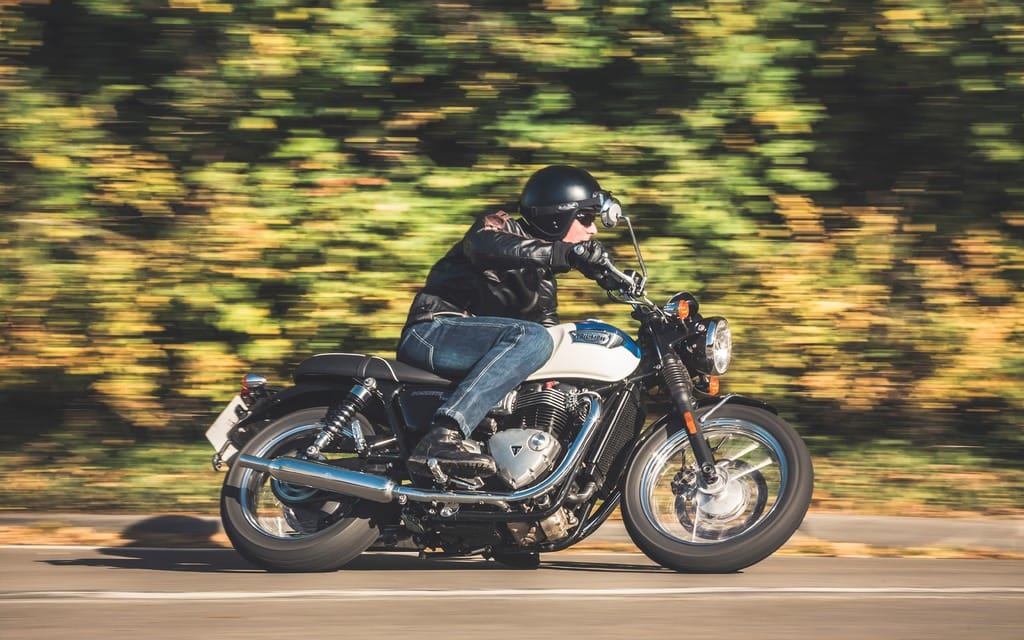 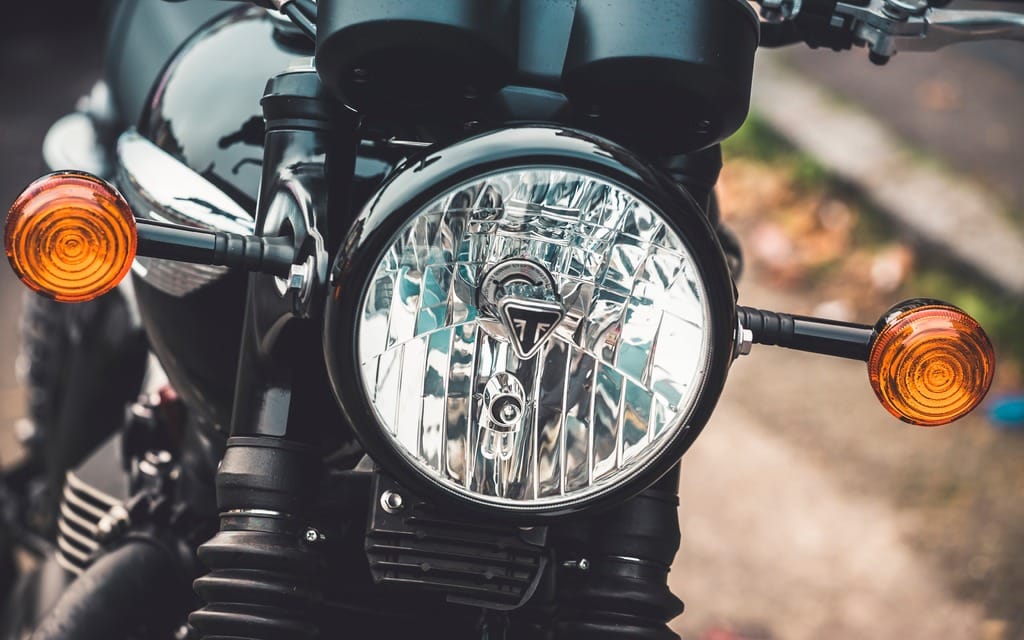 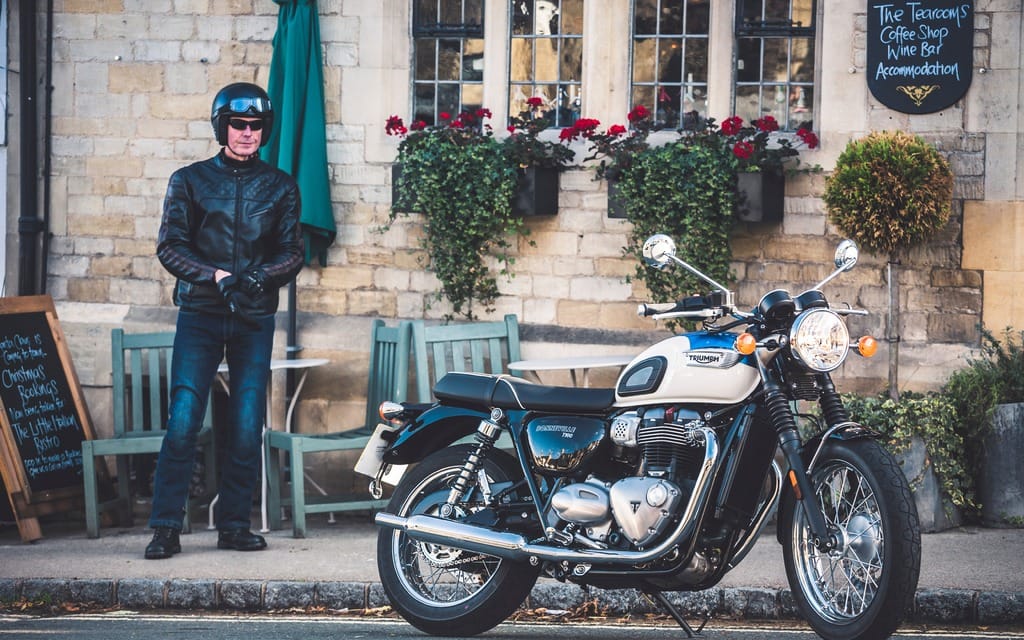 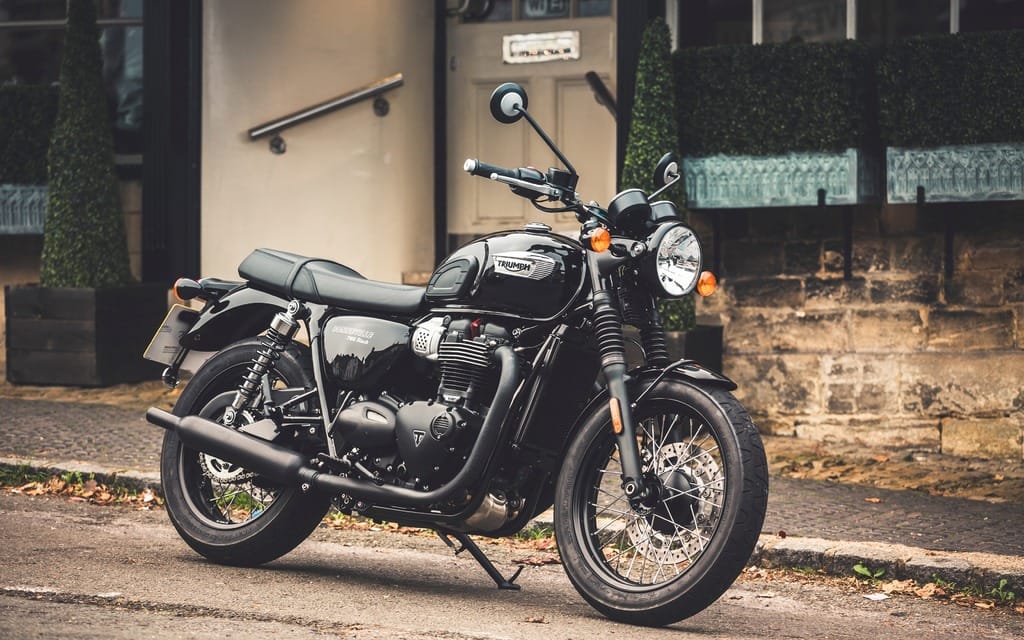 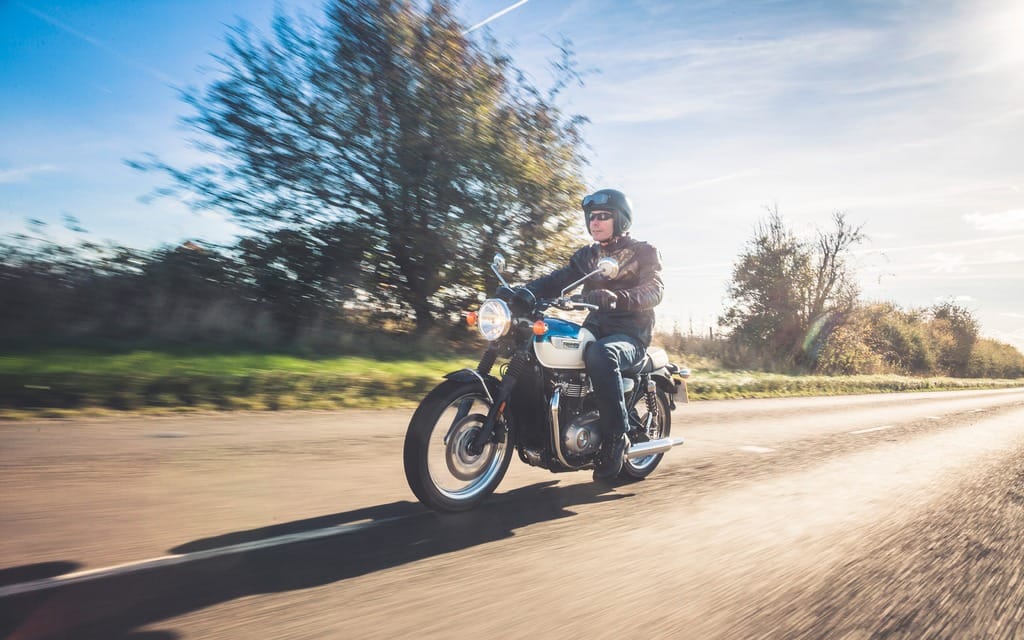 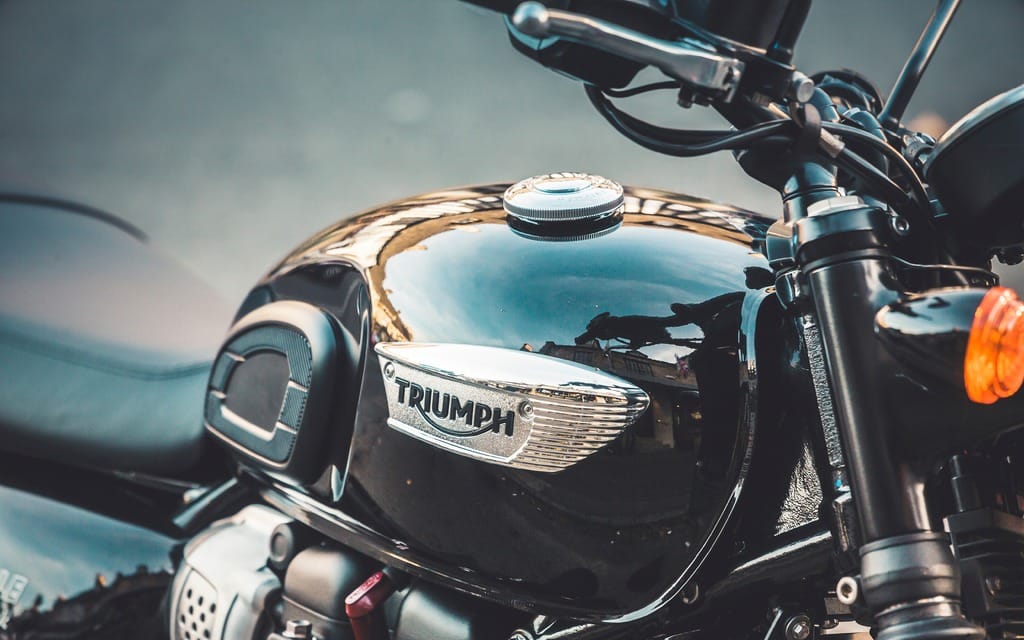 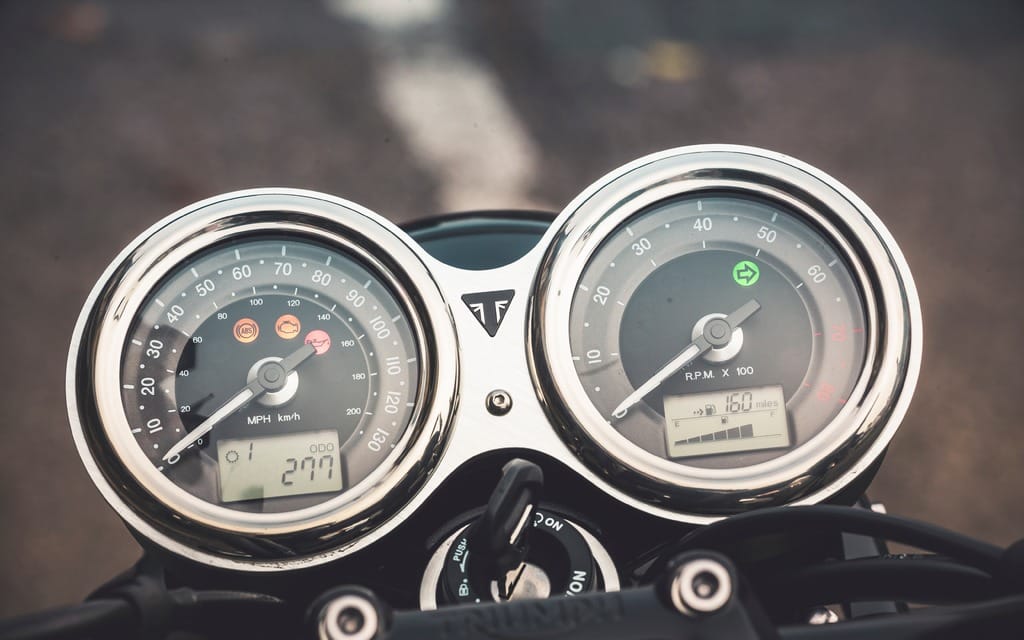 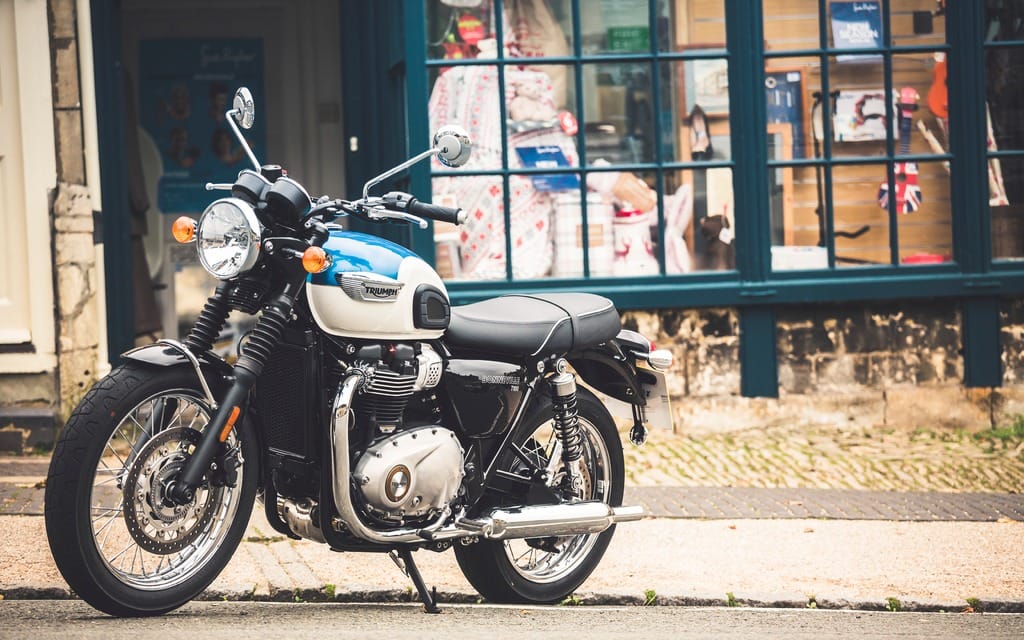 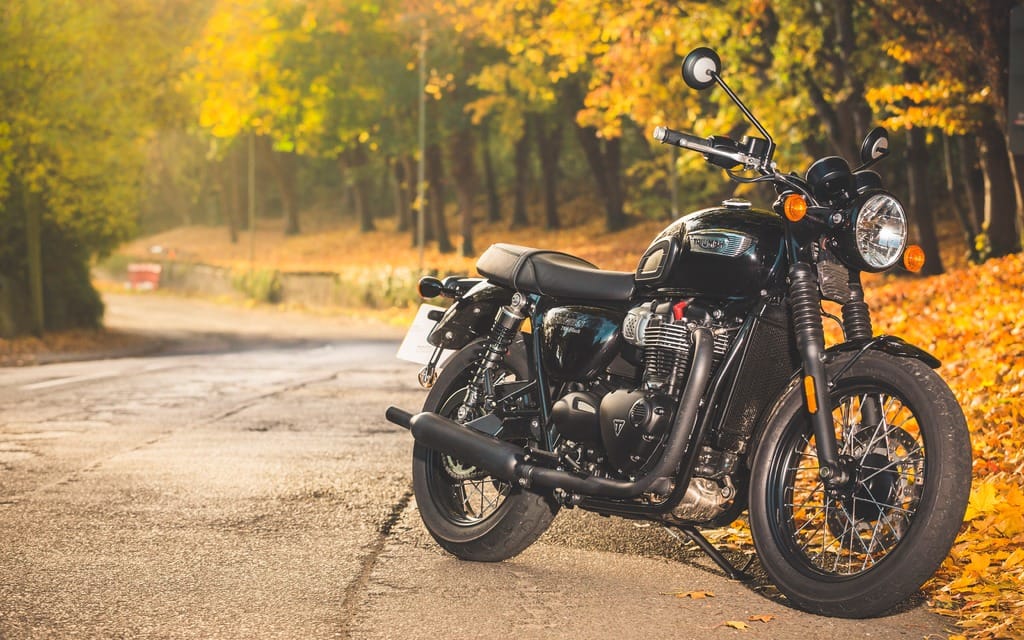 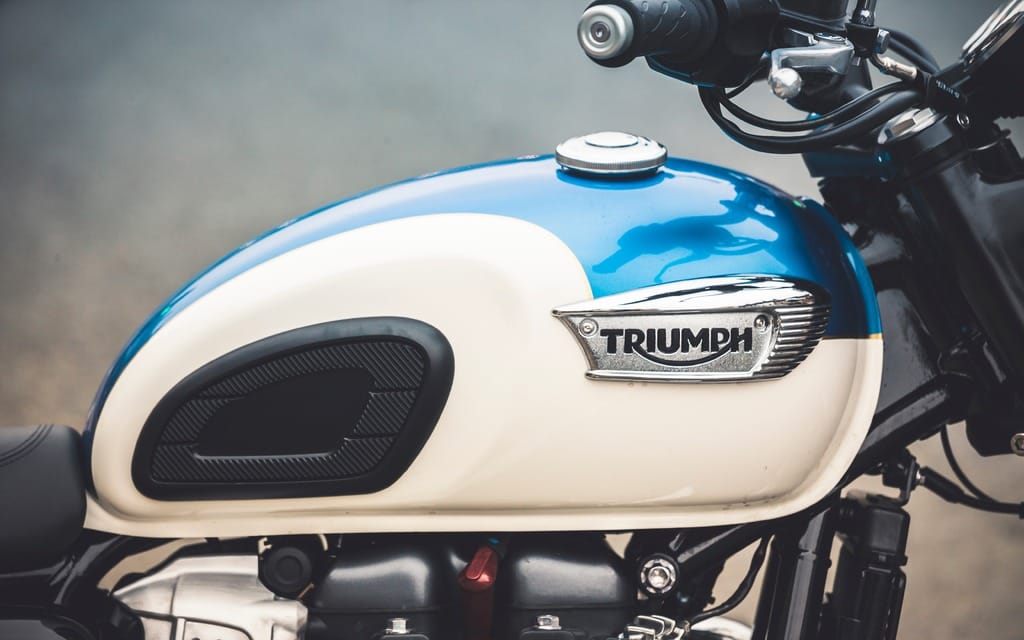 Lower spec Triumph twin warms the heart, if not the hands
We’re almost back at Hinckley when I finally get a chance to see whether the Bonneville T100 lives up to its name. After miles of twisty roads and traffic, the A46 suddenly opens out, clear tarmac stretching ahead. So I tread down a gear and wind open the throttle to discover whether the Triumph is really good for 100 mph (161 km/h).

The Bonneville pulls crisply and fairly hard from about 3000 rpm in fourth, its speedometer needle sweeping past 80 mph, roughly 130 km/h, as I flick back into top gear, then crouch down with my chin nudging the blue-and-white tank and take my feet off the footrests to stretch my legs backwards to help by cheating the wind in time-honoured Bonneville salt flats fashion.

As the hedges flash past faster, I’m switching my gaze between the road ahead and a speedometer that quickly reaches 90 mph, then more slowly edges to 95 mph. The Triumph keeps pulling smoothly, cold autumn wind watering my eyes, as it eases to 98, 99, and then 100 mph. Moments later the bike is still accelerating gently and showing about 105 mph, 170 km/h, when a curve appears ahead and I have to slow.

So this new Bonneville earns that T100 designation, with its indicated speed at least, and would probably have gone slightly faster if given more room. Which is not a bad effort, given that this new, 2017-model Bonnie is a smaller-capacity, less powerful model powered by the 900 cc, 54 bhp parallel twin engine used for the entry-level Street Twin, rather than the 1200 cc, 79 bhp unit of the Bonneville T120 that was released at the start of the year.

Of course, this Bonneville has not been designed primarily for speed and horsepower, unlike the original T120 Bonnie that was the old Meriden firm’s hot sports model on its launch in 1959. The modern T120 is much more gentle than its feisty forebear, and the T100 goes a stage further, joining the entry-level category alongside the Street Twin, and sharing that model’s ability to be restricted to 47 bhp for European A2 licence-holders.

Its sohc, liquid-cooled engine is mechanically identical to the Street Twin unit, which means it comes with five rather than six ratios in its gearbox. It generates that 54 bhp maximum output at 5900 rpm, like the Street Twin, and more importantly shares a near-flat torque curve that reaches its peak of 80 N.m at just 3230 rpm, less than halfway to the 7000 rpm rev limit.

Almost all the rest of the T100 comes from the T120, though its chassis gets longer rear shocks, which reduce trail slightly and raise the seat height by five millimetres to 790 mm. The other changes are mostly omissions, designed to reduce cost. This Bonnie does without the more powerful model’s second front disc, and also foregoes its standard-fitment centre-stand and pillion grab-rail. A one-kilo weight reduction, to 213 kg dry, is little compensation.

Most of the neat bits are thankfully still in place, and the T100 is every bit as cleanly styled and neatly finished as the bigger Bonneville. This smaller-engined model, too, comes in two versions: the standard T100 with a sparkling of chrome and the option of two-tone paintwork; and the low-key T100 Black with suitably dark handlebar, crankcases and exhaust, and a choice of gloss or matt finish.

All options retain the T120’s fork gaiters and petrol tank knee-pads. The alloy-mounted instruments also remain, as do neat bits including the Triumph logo’d handlebar clamp, filler cap and front mudguard support. But the fuel-injection system loses the T120’s dummy carburettors, replaced by drilled alloy covers. More disappointingly on a cold autumn morning, the T100 does without its sensible sibling’s standard-fitment heated grips.

Thankfully the sun soon took the edge off the chill, and the T100 proved a very pleasant way of taking a twisty, cross-country route from Hinckley to a picturesque village in the Cotswold hills for a warming pie and soup. This Bonnie’s 900 cc engine might not quite have the shove of the bigger unit, but it still has plenty of seamless grunt almost from idle, pulling so crisply yet controllably that its lack of the T120’s alternative engine mode never entered my head.

It was nice to have the view of those chrome-rimmed analogue clocks, which incorporate digital readouts for fuel consumption, remaining range and more, but in reality the tachometer was barely needed. The Bonneville pulled forward obediently every time I wound back its throttle, its flexibility ensuring that the T120’s sixth ratio wasn’t missed, and making overtaking easy when our three-bike convoy came up on traffic. I wouldn’t have minded a bit more power and top-end shove at times, but for gentle retro-bike riding the Bonnie was very pleasant, the experience enhanced by a soft twin-pot exhaust note.

This bike weighs 15 kg more than the Street Twin, so presumably loses a little acceleration, and generally has a slightly larger and more substantial feel. Its wheelbase is 35 mm longer, its seat is 40 mm higher and its riding position roomier as a result, with plenty of legroom and the slightly raised one-piece handlebar within easy reach. It will probably suit most riders but not those with short legs. Shame the mirrors are too close for good visibility, and the switchgear looks slightly cheap, though it worked well enough.

Chassis performance was very respectable, the T100 perhaps predictably feeling slightly more manoeuvrable than the heavier T120, without quite matching the impressive agility that was among my favourite characteristics of the Street Twin. This Bonneville certainly seemed to steer with a little more enthusiasm than the larger-capacity model, presumably due to its lighter front wheel and slightly raised rear end.

On the other hand, its ride quality didn’t seem quite as good. The shocks sometimes felt slightly crude over bumps and potholes, though the Triumph never threatened to get remotely out of shape. It held its line effortlessly through rural bends and main road curves alike, and could be cranked over reasonably far before footrests touched down, allowing the retro-patterned Pirelli Phantom Sportscomp tires to confirm they gave plenty of grip, and will rarely need assistance from the traction control system.

I also found the braking perfectly acceptable, although the T100 obviously loses some bite with its lack of the second front disc. I simply tended to squeeze a little harder, aided by the fact that both handlebar levers are adjustable for reach. The rear disc added some controllable stopping power on the few occasions it was needed, helped by the efficient ABS system.

So in most respects the T100 didn’t suffer too badly in comparison with its bigger-bore relation (the engines share an 80 mm stroke, the reduced capacity coming from a bore decrease from 97.6 to 84.6 mm). As well as being slightly more manoeuvrable it will also prove less expensive to run. The digital display showed an impressive average of less than 5 l/100 km despite fairly enthusiastic use of the throttle, increasing the retained, 14.5-litre tank’s typical range to well over 260 km.

But it is the Bonneville T100’s purchase price – roughly 15 percent lower in most markets – that is likely to do most to make it a hit. It could appeal both to older, experienced riders who remember the hard-ridden Bonnies of the sixties and seventies, and to a newer, younger crowd who appreciate its classical good looks, rider-friendly performance and respectable versatility.

If you don’t need the bigger-engined model’s extra grunt, the difference in cost can be put towards customizing the T100 from the large selection of extras, from flyscreens to silencers, polished engine covers to waxed cotton panniers. (And to restoring the T120’s missing hot grips and grabrail, for starters.) This new, more modestly priced twin certainly offers a useful saving, along with plenty of traditional style – and enough pace and parallel-twin charm to make it a useful addition to Triumph’s growing Bonneville family.