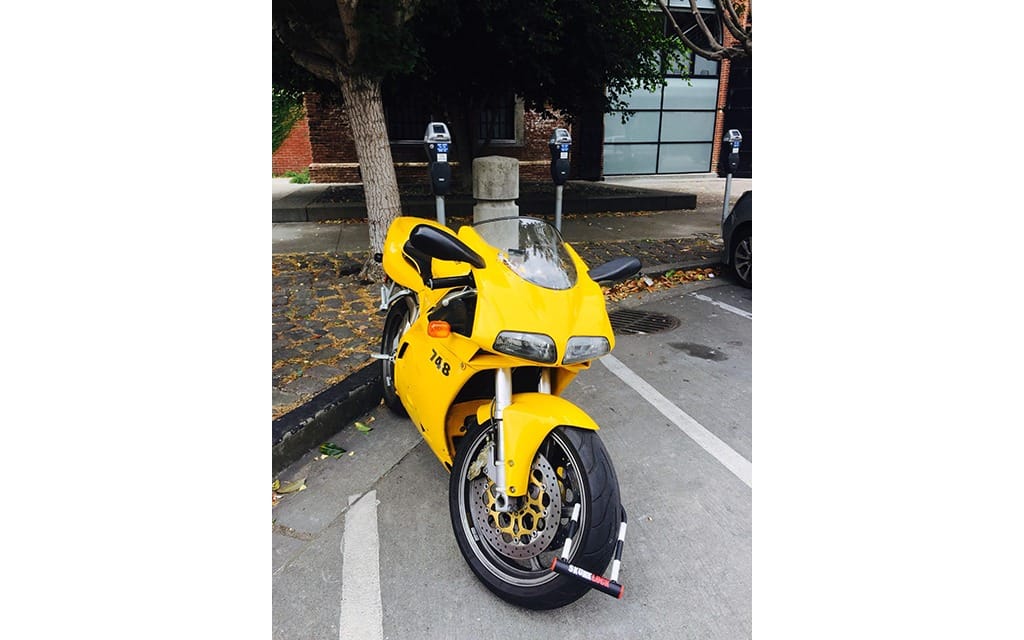 U-lock takes revenge on would-be thieves
In the recording, you hear the male host on Live 105 screaming “Put it back! Put it back!” as the female host threatens to open the vial that she’s just removed from five sealed plastic bags. She’s laughing. “It smells like a thousand corpses,” she says. He’s nearly puking. And that’s with the vial of Skunklock material unopened. What’s offending the radio hosts so badly is a proprietary compound that goes inside the Skunklock and stays there, unsmellable. Until a thief cuts through the bar of the U-lock attached to your bike. That’s when all hell breaks loose—or at least, smells that way.

“Kevin, it smells like dirty ass feet,” the female host says before opening the first of the five plastic bags. “That could be me,” Kevin says. But as she peels away layer after layer of plastic, bringing the closed vial ever closer to the studio’s relatively (Kevin’s feet notwithstanding) fresh air, the two of them start gagging. They might be faking for the mic, but when Kevin shouts, “I’m serious. Put it away, it’s disgusting,” he’s not kidding. And still, the vial is not opened. They never did open it, those radio-show chickenhearts.

But inventor Daniel Idzkowski—who along with Swiss-born engineer Yves Perrenoud began working on the bike-theft counterattack device a year ago, following the loss of yet another bicycle protected by an ordinary U-lock—said there was an exposure earlier that day; he was late for the radio interview, in fact, because some of the compound had got loose, rendering their office space uninhabitable.
But it’s not radiation; the place won’t have to be sealed with concrete for a thousand years. In fact, they had it mostly cleaned up by the time Idzkowski (pronounced like it looks) got to the station, the office was mostly okay. These inventors are smart: they invented an antidote. But that’s for them. Until the steel is cut through with an angle grinder or some other tool, the noxious compound is undetectable. But for a thief, there’s exposure, on cutting into the U-bar, of a “food-grade” formula that’s “not designed to cause harm” to humans but that smells like concentrated vomit and causes shortness of breath, compromised vision, and, of course, vomiting. It’s hard to imagine someone continuing to cut through your lock, then getting on your bike and riding it away, under such conditions. Idzkowski says the formula was six months in the making, and has been further refined. “Our requirements were set from the outset to be non-harmful to humans, but to be so effective that one could not continue a bike theft after exposure.” He said it was crucial to the pair that the compound would not harm people, but “we have exposed ourselves to the formula numerous times now and have experienced the symptoms. We didn’t want to use something we weren’t willing to test on ourselves.” They even tested it wearing gas masks and found them ineffective against the potent chemistry of that smell.

We at CC became aware of the Skunklock on the Indiegogo website, where Idzkowski, who lives in San Francisco, promoted the idea of a lock that fights back in order to raise production funds. We saw the tagline and were convinced that you had to know about this: “The bike lock that will make thieves vomit when they try to steal your bike!” It’s almost enough to make you want to lock up your bike in a high-theft area and just watch, maybe with a six-pack and some friends. At the very least, it’s something for every motorcycle owner who’s ever wished he or she could strike back at a thief.

So far, they’ve raised through Indiegogo about $45,000, which is more than they asked for, but you can still invest if you want. When it becomes generally available the lock will cost about US$150, which is expensive, but according to Idzkowski, any U-lock can be broken with the right tool. This one, at least, offers a second layer of resistance against theft. The “food-grade” smelly stuff makes it legal for shipping in the U.S., and though we can’t say if that goes for Canada, too, it seems unlikely that postal or Customs authorities would refuse entry to what appears to be an ordinary U-lock.

The Skunklock was invented as a bicycle lock, but is large enough to fit on a motorcycle, and is made from hardened steel, so in most respects it’s similar to the Kryptonite or other U-lock that you’ve seen on other motorcycles. It should be ready for shipping in June. Go to skunklock.com for more info or to order (or Indiegogo.com to order early for a price break). Listen in on Idzkowski and those chickenhearted radio hosts at http://live105.cbslocal.com/2016/10/31/scent-of-skunk-lock-makes-kevin-klein-gag.