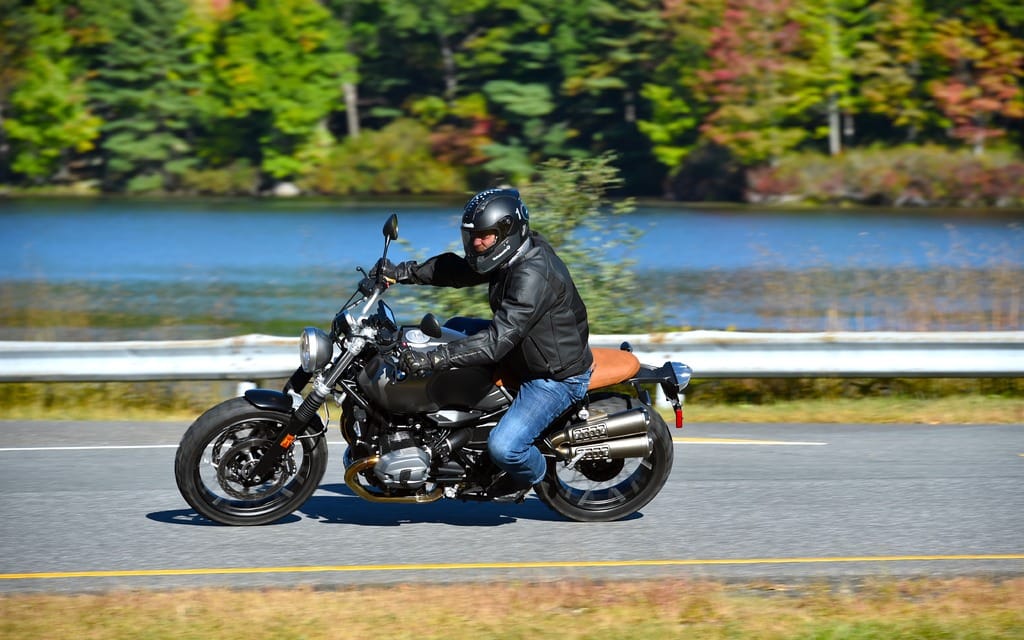 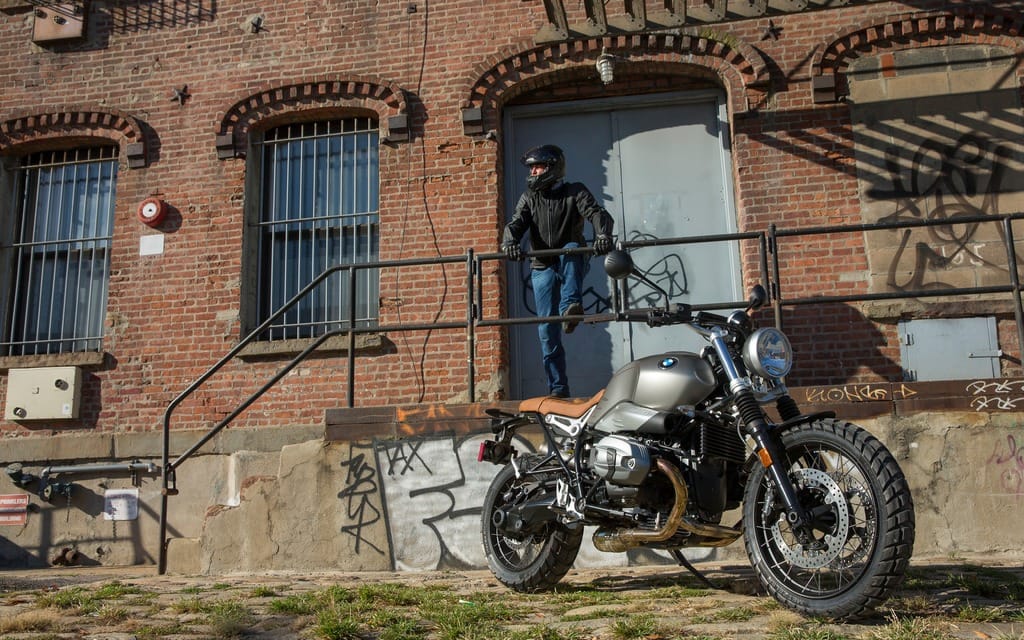 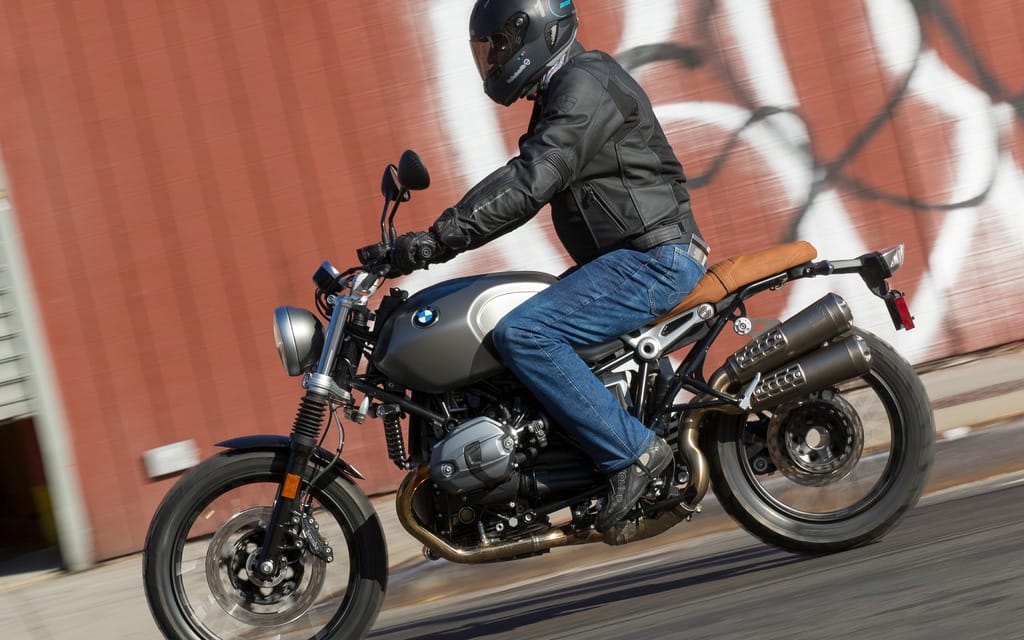 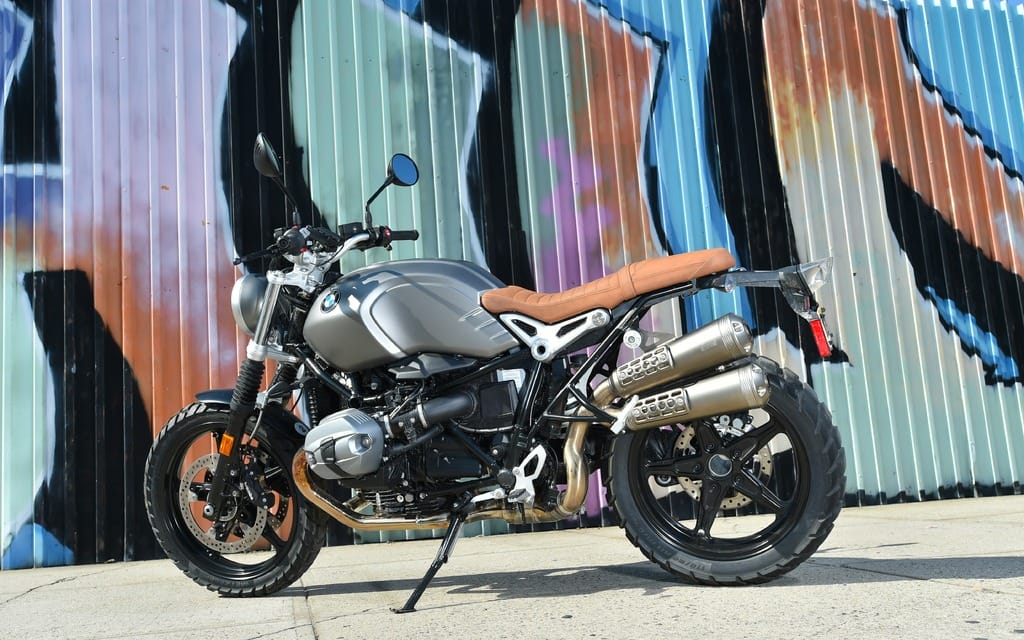 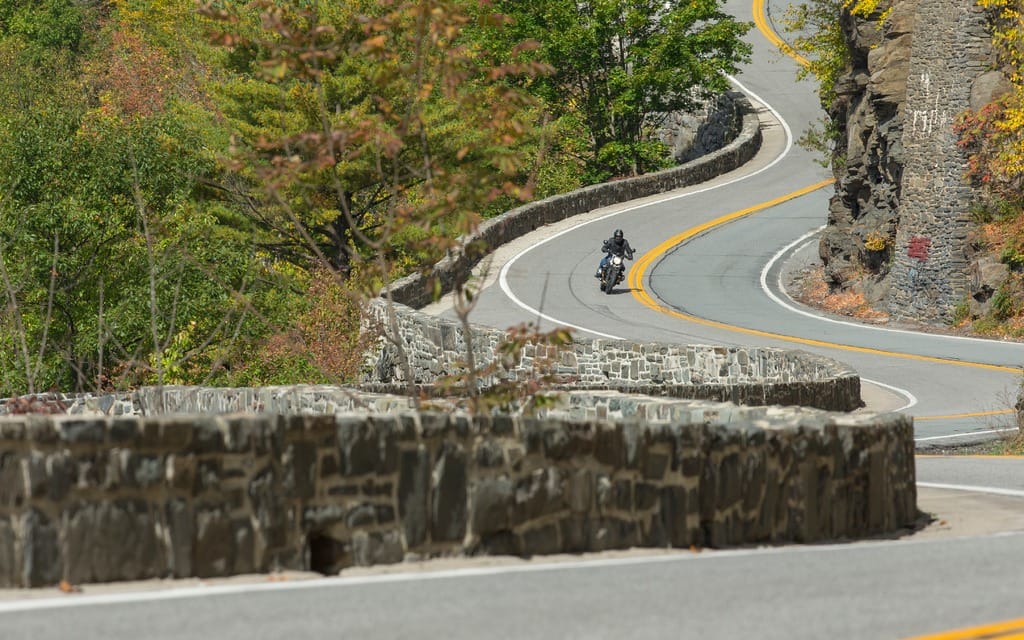 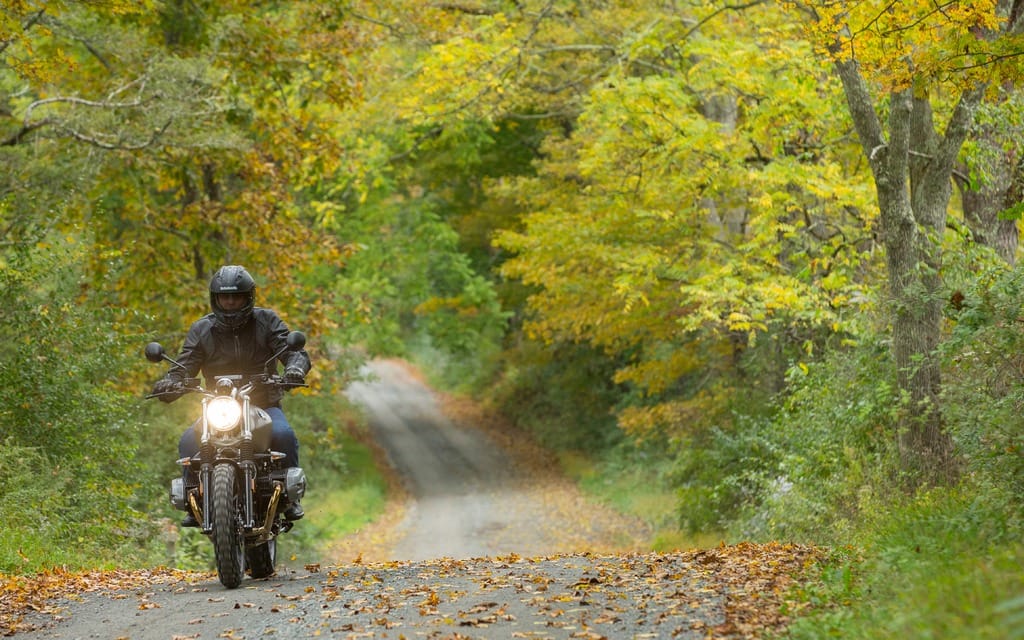 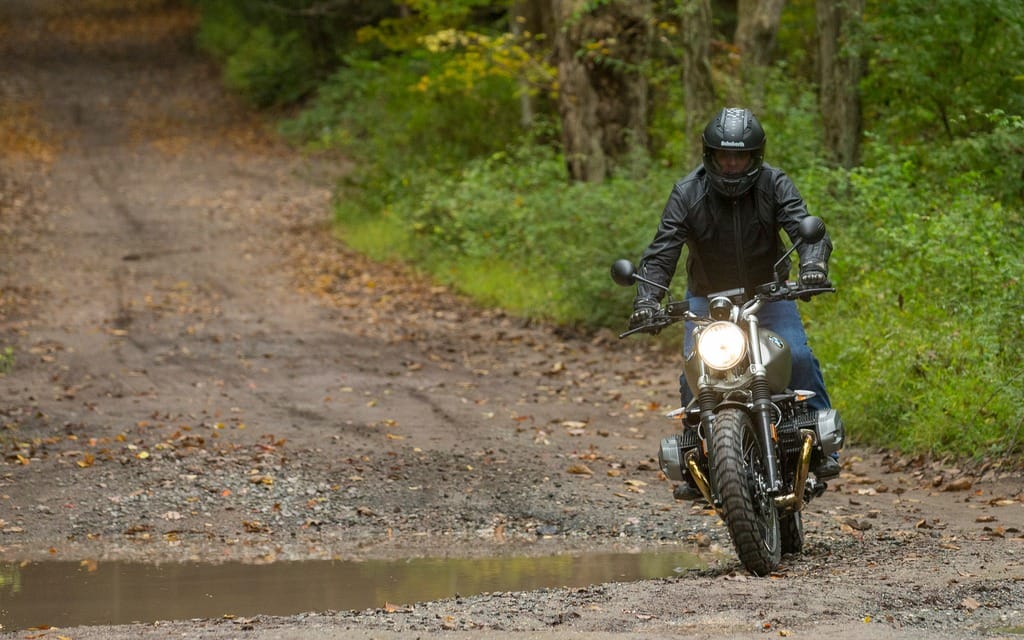 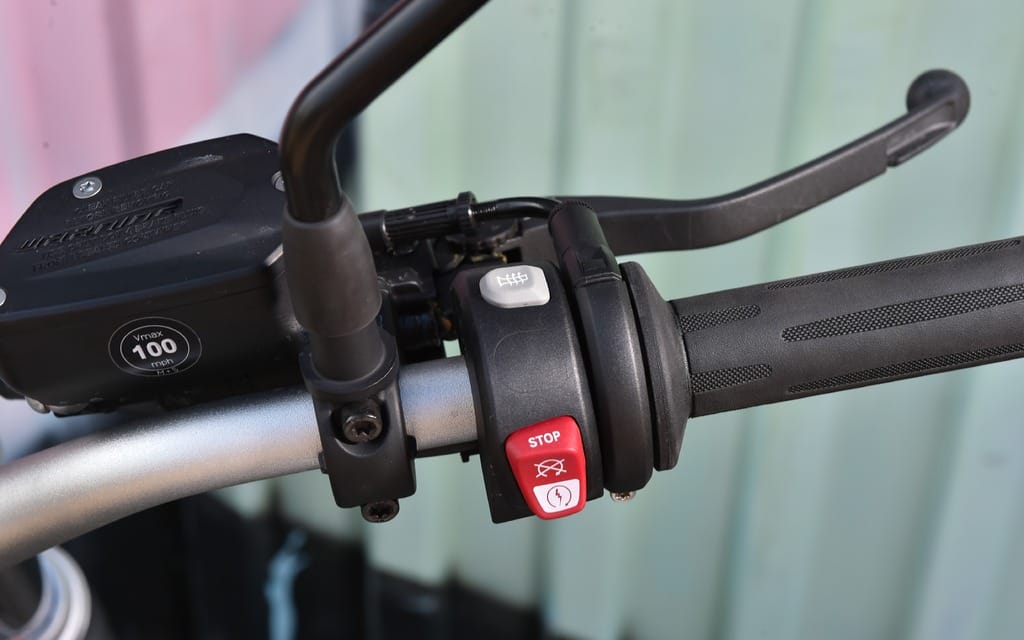 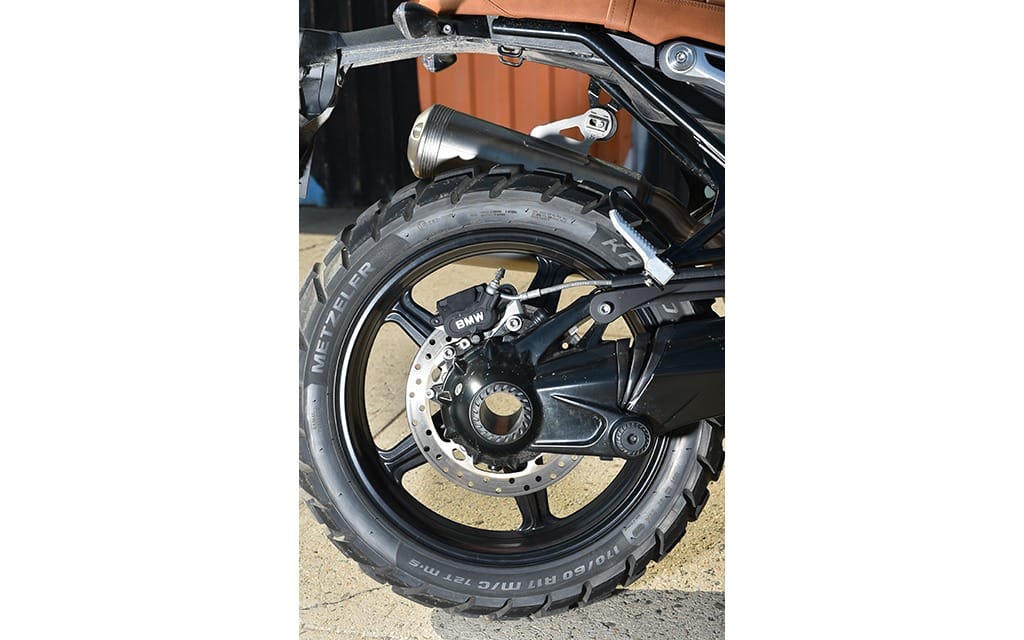 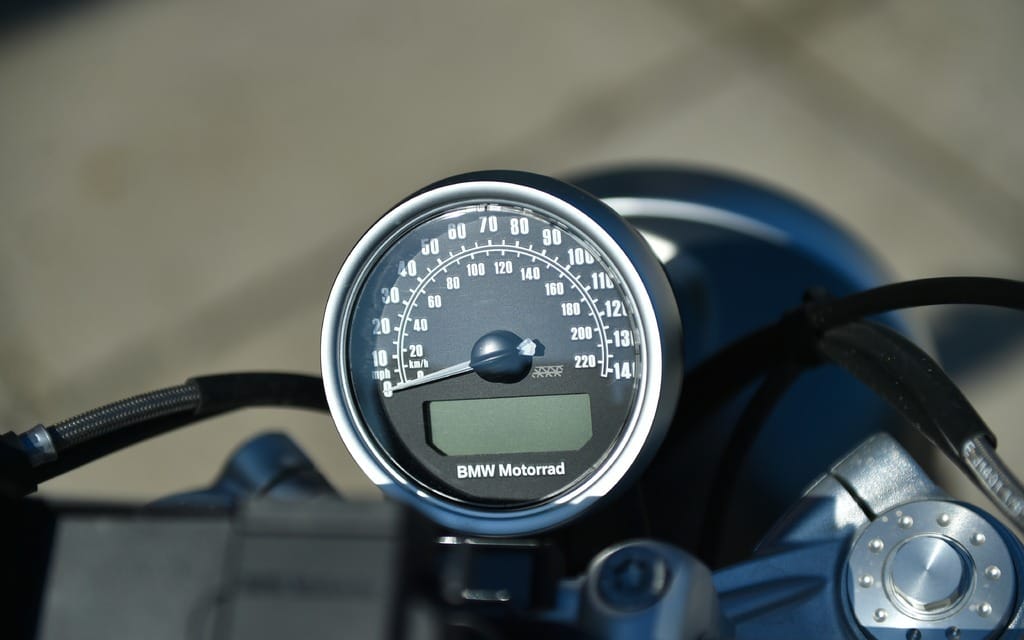 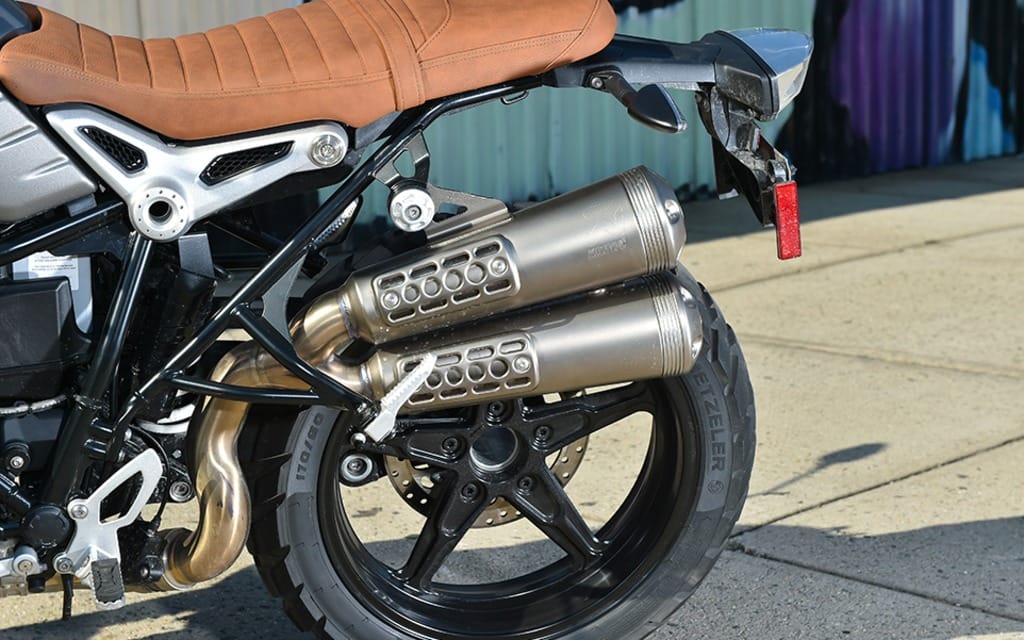 BMW’s faux off-roader looks right, but those shoes are more style than function
BMW’s statisticians claim that you’ve probably already decided whether you’re going to buy the company’s new R nineT Scrambler or not. You haven’t read a word I’ve written, perused a single brochure and, in all likelihood, or even ventured into a BMW dealership. You have no idea of the new Scrambler’s performance, its specifications, or even, truth be told, its basic strengths and weakness. You simply took a gander at the beauteous bike on the cover and decided you had to have one.

So strong is this physical allure, says BMW, that fully 79 percent of the motorcyclists who will plunk down a minimum of $14,250 for this latest member of BMW Motorrad’s “Heritage” lineup will do so primarily because of its style and design. Even more incredibly, nine percent will have never owned a motorcycle before. Wrap your mind around those statistics and the only conclusion you can come to is that the BMW “Heritage” series is so enticing that almost one in 10 of the predominantly 50-something males who will buy this latest version of the R nineT will do so despite not knowing anything about its performance or, in fact, having any prior interest in motorcycles, the Scrambler seemingly awakening their inner Steve McQueen and compelling them to a Motorrad dealership based on good looks alone.

This road test, then, is substance’s losing battle against style. It is for the other 21 percent who, though probably similarly smitten by the same two-wheel pulchritude, nonetheless want to make sure the new Beemer isn’t a complete turd. They may be fashion slaves but they’d like a little function with their form.

The good news for this minority is that, save for one odd but notable fault, BMW’s new Scrambler version of the R nineT is a more-than-capable motorcycle. That’s because it’s based on BMW’s R nineT café racer, a runaway hit among the custom crowd and the fourth-best-selling BMW motorcycle in North America. It, too, was originally a styling exercise, but its (semi) runaway success is based on combining its comely good looks with stellar performance. The fact that the Scrambler is essentially the R nineT in different clothes, then, should be welcomed as good news.

The engine, for instance, may not be BMW’s latest liquid-cooled Boxer twin, but the “old’ 1,170-cc Oilhead still has some moxie. BMW claims 110 horsepower at the crank — that’s about 100 at the rear wheel — more than enough to motivate its 220 kilograms with dispatch. With shorter gearing — the rear drive ratio is 2.91:1 — than the café racer, the Scrambler has excellent punch off the line and passes with alacrity even if there are times, say droning along a freeway, when you will hunt for a taller, seventh gear. There’s plenty of low-end torque, it revs to its 7,750-rpm power peak quickly (though you will never know exactly how quickly as the tachometer has been jettisoned as superfluous to “scrambling”) and, as it should be after so long in production, BMW’s now-generation-old Boxer twin is well sorted. Thanks to some Akropovic-built pipes that also help it meet Euro 4 emissions standards, it even has a scintillating exhaust note. More First World War Sopwith Camel than modern V-twin flat tracker, the syncopation is nonetheless alluring. Oh, and one last note on how deliciously right BMW has styled the Scrambler: the tips of the Akropovics feature five circular indents, almost perfectly mimicking a Supertrapp silencer of yore. The young ’uns may not recognize the touch but we fogeys appreciate the homage.

Other performance aspects impress as well. The front brakes are hugely powerful and extremely linear, control so fine that you almost don’t need the ABS system (which, thank God, is standard even on this, a retro “heritage” bike). Another concession to style; the Scrambler’s front fork is an older “right side up” affair as opposed to the inverted fork the R nineT rides on. Less contemporary it may be — and isn’t that the point, really — it’s more than capable and boasts five more millimetres of travel — 125 mm in all — than the R nineT’s inverted affair.

The rear monoshock gets an even bigger gain, its 140 mm of wheel travel some 20 mm than the R nineT enjoys. Springing is softer — notice I didn’t say soft — as a result. That said, the Scrambler is no R1200 GS. We off-roaded BMW’s latest “desert sled” a little and it was suspension travel — or lack thereof compared with a true adventure bike’s — that will make such forays rare. Yes, it will go deeper into cottage country than the R nineT, but you’re still not getting to that remote fishing camp.

In other arenas of comfort, the Scrambler likewise exceeds the R nineT. The most obvious boon is the more generous seating accommodations. The seat has been raised 35 mm to 820 mm, the footpegs are lowered and, though the handlebar dimensions are identical, it now rides on risers. The result is a more upright seating position that — though not quite touring — combined with the surprisingly (because it’s so thin) comfortable seat makes a perfectly passable weekend touring mount, that is until the lack of wind protection and saddlebags dent any nod to practicality.

Nonetheless, so far, the news has all been very positive. The 79 percent who were already convinced have already moved on and, for the 21 percent looking for affirmation that function at least keeps up with form, the lack of a discouraging word is promising.

However, there is an issue that might actually force the 21 percent to choose between substance and style. The problem is that, at low speeds — say below 40 kilometres an hour — something was amiss with our test bikes’ steering. Initially, the Scrambler would fall into the turn too quickly and then, seemingly just to confuse you completely, it would require extra effort to keep it turning. Take your present ride, lower the rear tire pressure to about 20 psi (while keeping the front at its recommended pressure) and you’ll have some idea of what I’m talking about.

Pretty much everyone — there were some 30 journalists present — wobbled around for the first few miles until they figured out not to countersteer the Scrambler at any speed below 40. Theories as to the source of this wayward behaviour ranged all the way from blaming a cranky steering damper to noting that the tall front tire changes the steering geometry a little (the Scrambler’s wheelbase is some 46 mm longer and the fork is kicked out some three additional degrees). Eventually, however, most people settled upon the tires as the culprit. As delivered to us in New Jersey for testing, all the Scramblers came with BMW’s off-road tire option — Metzeler Karoos in 120/70R19 front and 170/60R17 rear sizes. Their profiles are not well matched, the combination of off-road tread pattern — that would be part of the Scrambler styling motif, geddit? — with the superbike-sized rear rubber caused the broad, flat rear tire to “push” the narrower, rounder front.

That’s not to say the Metzelers don’t have their attributes. Their large — for an off-road tire — tread blocks bring plenty of grip on the street. I had no problem dragging the footpegs on some of New York’s smoother tarmac. And, they are, as Metzeler promises, quite adept off-road. The Scrambler’s suspension, as I mentioned earlier, was a far bigger impediment to Paris-Dakar profiling than the tires.

Truth be told, I eventually got used to the Scrambler’s quirky low-speed handling, though the first time I drove my V-Strom when I got back home, I almost countersteered into a lamppost. And to be fair to Metzeler, it’s at least partly BMW’s fault for spec’ing a rear tire so wide in off-road rubber.

More importantly, I later tested an identical Scrambler with street-oriented Pirelli Scorpion Trails in similar sizes and most of the flopping about was eliminated. It handled, well, like a regular BMW. The even rounder-profiled Michelin Pilot Road 4 Trails BMW also offers as a no-cost option should eliminate the weirdness altogether.

Nonetheless, the Scrambler, at least shod with the Karoos, has some low-speed handling quirks. So, here’s the quandary. BMW thinks — and pretty much everyone who attended the press unveiling agrees — the Karoos will be the consumers’ tire of choice. They are, after all, styling appropriate and, well, suitably butch.

Which leaves potential Scrambler owners with a conundrum. Do you opt for those fine-handling sport tires BMW offers, but then lose the much sought after street cred that is the whole reason for buying a Scrambler? Or, do you simply tolerate the low-speed floundering and “style” your way to happiness. To the 79 percent who care for nothing but fashion, wonky low-speed handling is but a small price to pay to ride next summer’s hippest urban commuter. The remaining 21 percent — those trying to balance form and function — however, will have a more difficult choice.

Decisions. Decisions. Indeed, the thing I like best about the new R nineT Scrambler is that a quick glance to its tires will tell you everything you need to know about its owner.

A custom motorcycle should be, well, customizable, and BMW certainly wants you to futz with the R nineT’s look. For instance, the Scrambler may come stock with black cast wheels, but a set of trendy cross-spoke wheels is just a $520 option (and a screaming deal compared with Americans who pay 500 high-exchange-ratio greenbacks for the same wheels). There’s also a pair of aluminum tanks — $1,175 with exposed welds, $1,300 for sanded and polished welds — to replace the standard steel item. However, perhaps the most notable custom feature doesn’t cost a thing. Mimicking that airy look to the rear end that customizers now favour, BMW has made the Scrambler’s rear seat subframe removable. Eight bolts removed and single seat installed, the Scrambler is even more impractical, albeit immensely more hip. Add BMW-sourced side number plates, headlight guard and a little front number plate/windshield and your Scrambler look is complete.