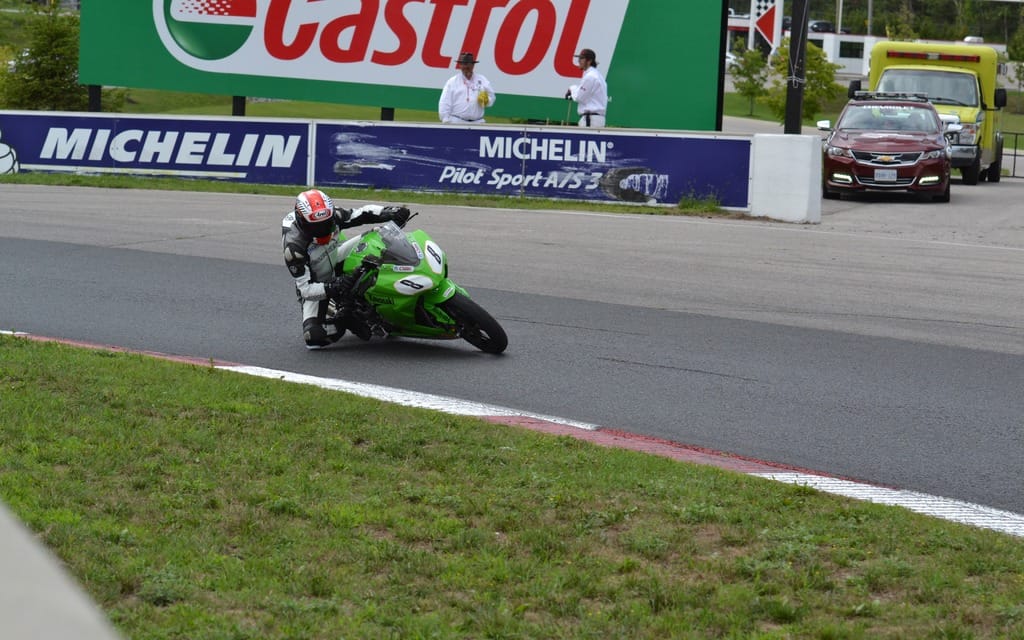 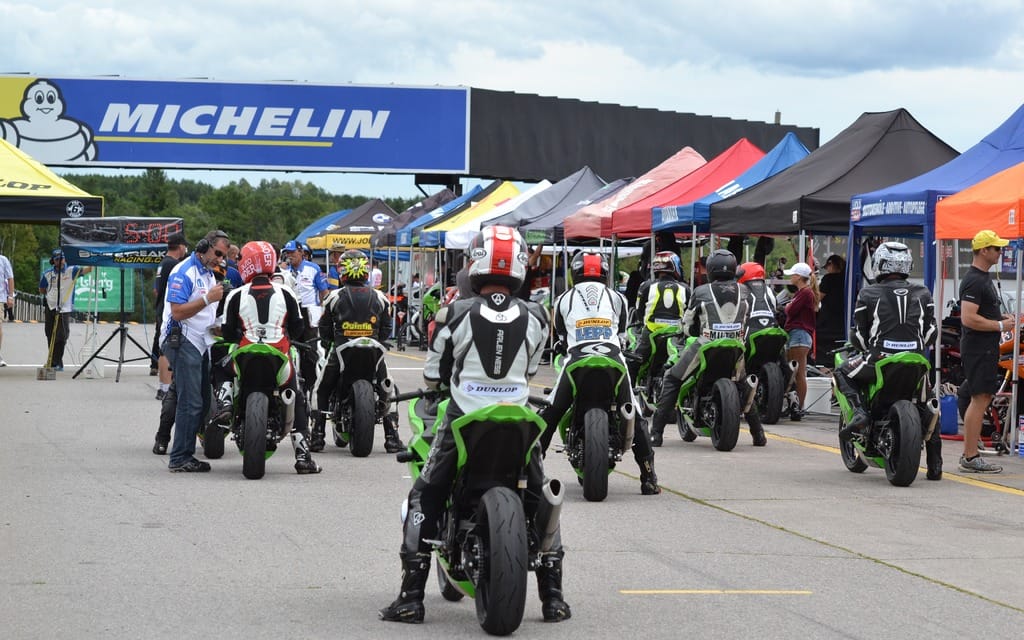 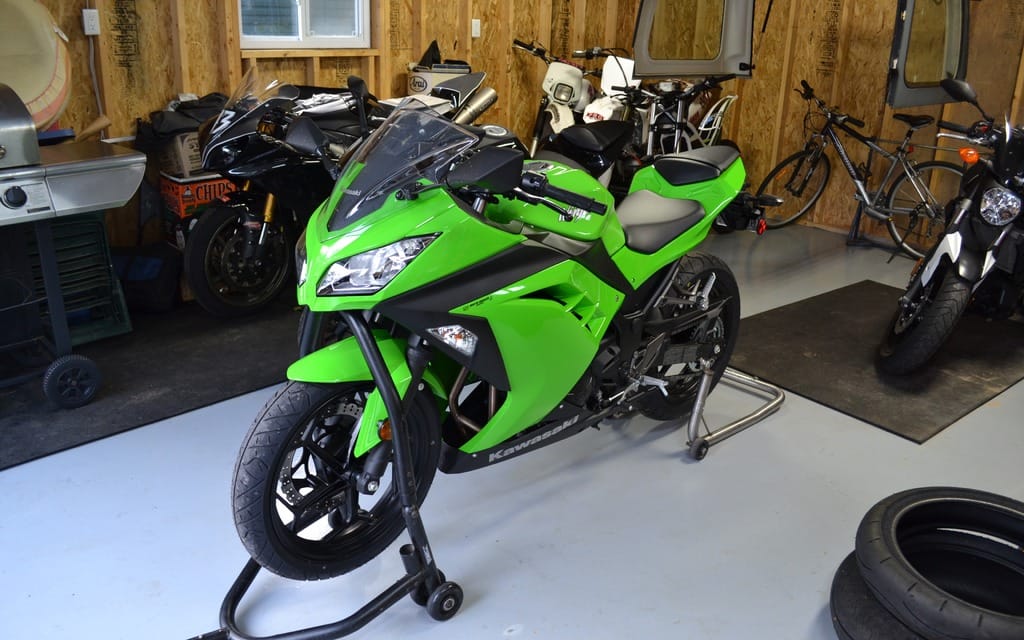 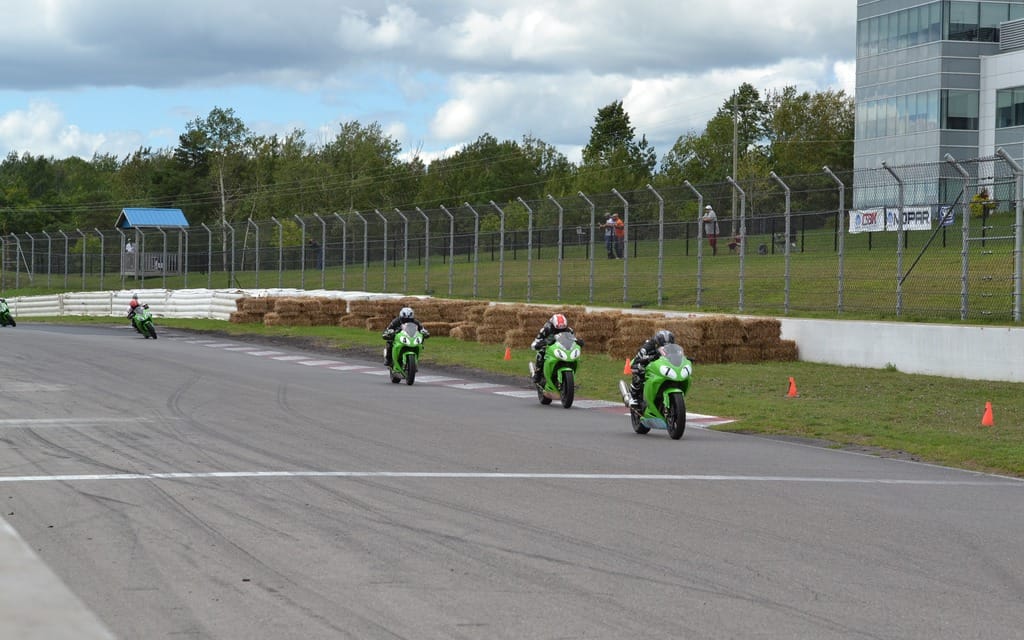 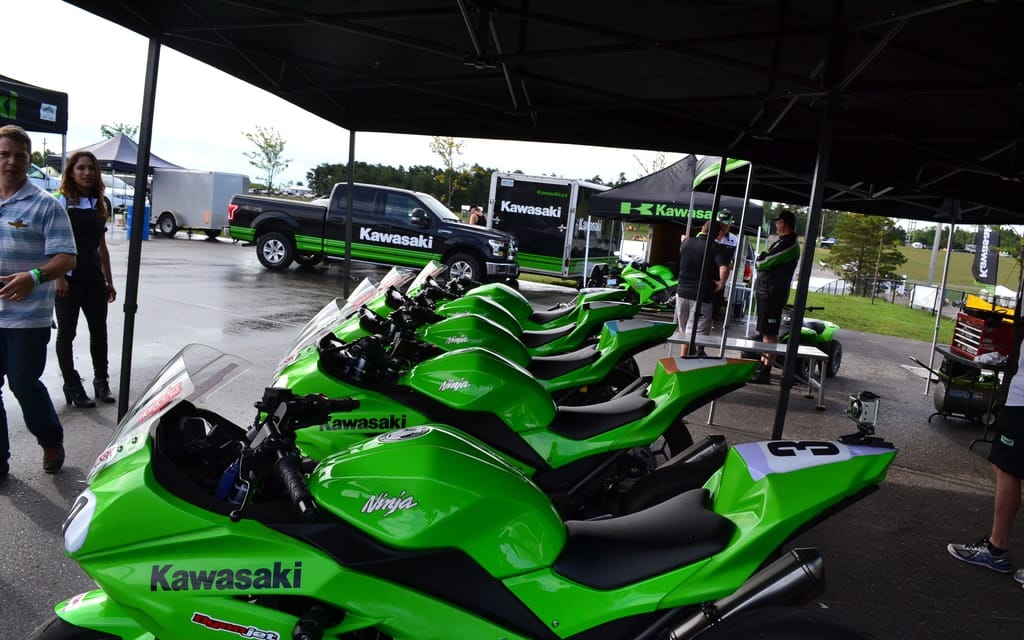 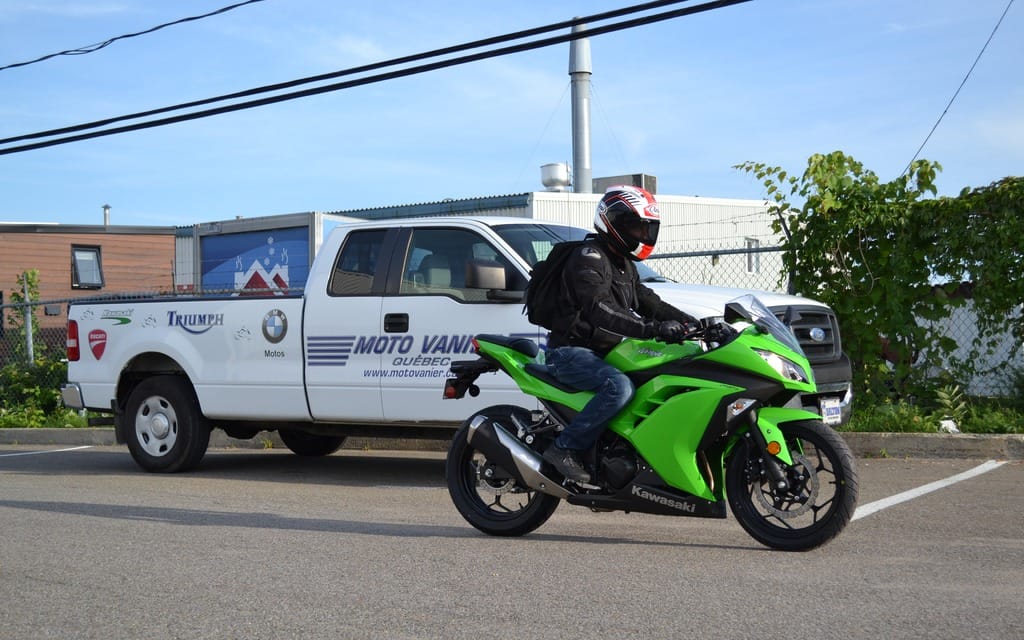 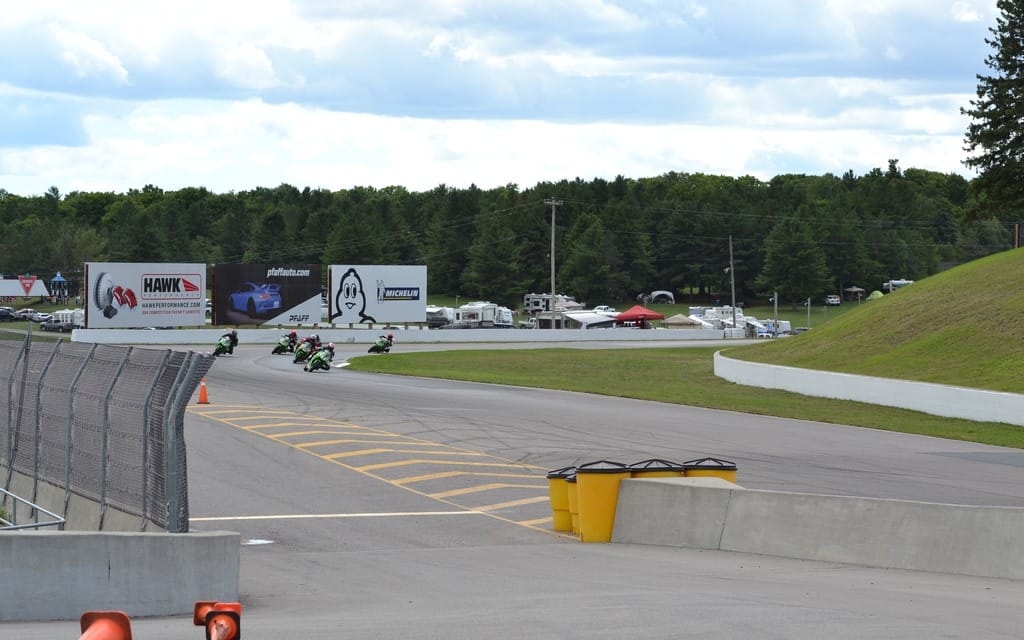 I corner Colin Saturday afternoon. “I know I was late with my request but I saw a Ninja 300 under the Kawasaki awning when the race was underway. Tomorrow I’ll be all geared up with my helmet in hand. If the bike’s there when they go out for practice, I’ll jump in.”

The boss of the Mopar Canadian Superbike championship looks at me and says: “Okay Guy, I’ll tell scoring that you’ll race tomorrow. Just come early to get the papers signed and we’ll work it out with the Kawasaki people.” I had contacted him Monday when I learned I was to be at the CSBK season finale. And I started begging right there and then. Tuesday I talked to Brad at Kawasaki. They had 20 race-ready Ninja 300s built last year that were used to promote the series. He told me they sold a bunch of those and the bikes left were all reserved for the weekend. The invited media where chosen earlier and I was not on the list.

Sunday morning I park my van right by the Kawasaki rig. After some discussions and a ride to race control, two up behind Brad on a KLX 110, I’m in my leathers that miss the required patches for the series. That will be taken care of by John of Bickle Racing after the practice session. Time to go out on that Canadian Tire Motorsport Park circuit on the number 8 Cup bike. It’s been some 31 years since I last rode the circuit, and back then I had less than half an hour of track time. I ended up riding in a wheelchair that summer of 1985 after I crashed down the back straight here. A destroyed RZ500 and seven broken bones was the result of a spectacular tank slapper, where the steering damper got torn from the frame, when I hit a pavement defect at about 190 km/h.

This morning I have 20 minutes to refresh my memory and get up to speed and the little Kawasaki is just perfect for that. I am seriously lost in a few places. My entrance speed is too slow in turn 3 and I have no clue what line would work in the turn 4 and 5a sequence but I can make up some time in corner 8 at the end of the uphill long back straight. It’s easy; keep it just about pinned all the way to the apex! With 175, 180 km/h on the speedo (depending on how good I’m tucked in and if I got a draft or five down the straight) I sit up, roll off just a tad and throw the Ninja in the fast sweeper with a late turning point, no brakes. So much easier than to have to scrub speed and judge my corner entry speed as would be the case on a bigger bike.

I try to follow a couple of riders to learn from them. It is much easier to use another’s experience than to work it out on your own. Jean-Philippe, who is in charge with Brad to keep the fleet of green race bikes in shape, shows me a better way to string together 4 and 5a. I draft by him on the straight only to see him go in way too hot in turn 3 where he runs into JP from Montreal, one of the top guys to look out for in the race. They both manage to stay onboard—but barely—and I avoid running into them. At least I won’t get that spare bike pulled from under me for the race.

Sixth on the timing sheet does not look too bad until I see the gap with P1; a bit over three seconds. I have my work cut out if I want to get anywhere near the front. I have quite a bit of chatter around the flat corners. I want to do some change to the set-up, my 62 kg is much less than the previous rider’s mass, I guess. Almost zero front-end sag and eight mm on the rear, with me onboard, is far from the 25 to 30 mm I’m used to running on track. I’m told that John will take care of this but he comes over to my bike and then walks away saying this is the set-up I’ll race with. Okay, at least it won’t be different from practice.

Gridding up for the race, I’m back on the fourth row and I have a surprise competitor lineup beside me; Bodhi Edie is right there to my right. He had a mechanical issue with his superbike this morning and somehow someone came up with a Ninja 300 for him. “Hey Bodhi, let’s rock and roll! We go with those guys up front!” The reply was: ”Yes man!” and a thumb up.

As the flag light goes green we both swing to the left and around the third row in the first turn. As I fight for position I keep screwing up braking for turn 5a. My track habits are kicking in and I upshift two gears instead of going down. I blame it on being used to a GP shift pattern on track and my slow brain, not flexible enough under pressure.

The sun has raised the track temperature quite a bit from the morning practice and the Dunlop Alpha 13 tires now stick at their best, which is not good with my too stiff suspension. Did I say mention chatter? I can barely keep Bodhi in sight. He’s faster, younger and just plain better than I am and my times stagnate. As we go around Brad, he turns around and motions to come with him. I interpret this as a sign to his Kawasaki host, not to me, so I roll off a bit to let Brad by. Maybe it has to do with being a friend and co-worker with Jean-Philippe, but as we approach turn 3 I see the exact same move I saw in practice this morning; Brad gets over-ambitious on the entry and rams right into Bodhi, who saw nothing coming. I had taken action before what was an unavoidable situation so I squeeze inside the pile of green bikes and riders sliding down the track. A couple more botched downshifts and suddenly I find some company coming from behind. It is more fun to mix it up than to just go alone for the last few laps but it’s not so easy to get ahead to cross the line in that pack of five bikes fighting for sixth place.

At the end of the day I come across Colin again. “How was it, Guy?” “So much fun! I have to get myself one and I’ll get some kid to be on the gate for next year’s series backed by our school.” He looked at me, made a call and added: “Good, drop by tomorrow, I’ll give you a set of bodywork we have lying around. You’ll have a start to getting a bike ready.” Thanks Colin, now I have one more small green track bike in my garage. It’s bone stock and it should be the focal point of some articles on how to get yourself on track on a limited budget in these pages soon.