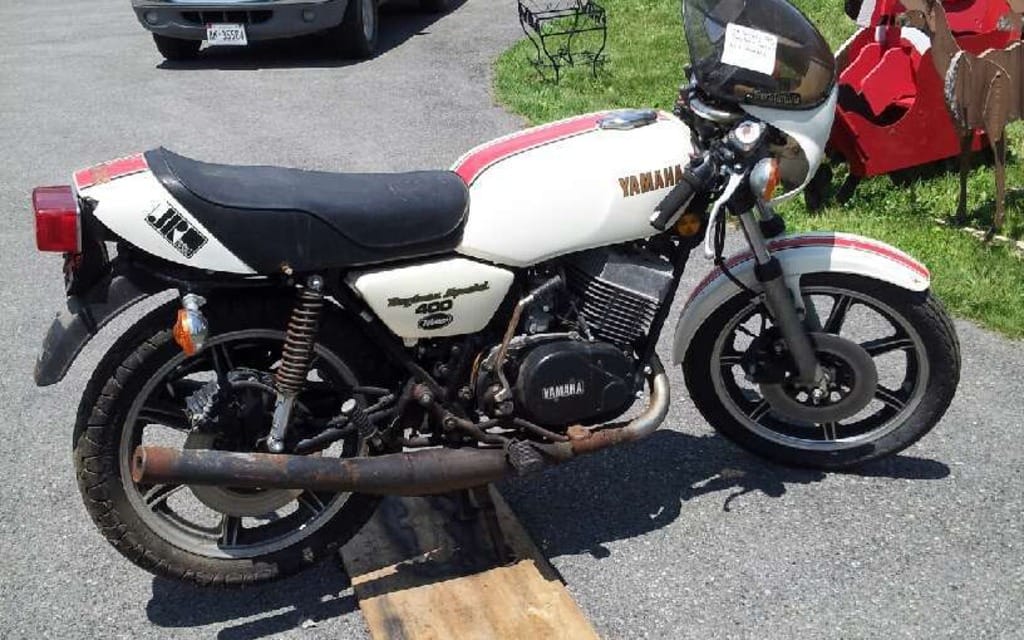 In 1979, long before my time, the fuel injected engine, or commonplace antilock brakes, my father was trying to break into the world of motorcycling. Being an 18-year-old male, the 1979 Yamaha RD400 Daytona Special was an obvious choice; two-stroke power, styling done as an ode to Yamaha’s recent racing success, raised foot pegs for greater ground clearance in the twisties: every mother’s worst nightmare.

But with the salary of an 18-year-old, certain sacrifices had to be made. He chose instead to pursue a lesser, albeit still new and dangerous, yellow 1978 Yamaha RD400 from his local dealer in Trenton, Ontario. This bike wasn’t quite on par with his initial desires, but not exactly a big leap down one. With the aforementioned salary that required such great sacrifices, financing and a co-signer was required. I’m not sure of the technicalities or looseness of how loans and financing were handled in the ’70s, but somehow my grandparents’ names were put down unbeknown to them, and my father was well on his way to street hooliganism and freedom.

Whether it was out of the moral concern of setting an 18-year-old loose on the road with a bike entirely capable of raising the front wheel through the first couple of gears, or for fear of not receiving the money (I suspect the latter), my grandparents were contacted by the dealer for confirmation that they did in fact support this venture, and my father returned home to a stern “absolutely not” or something along those lines.

Fast-forward 29 years and my dad decides he’s ready to break free of the tyranny of his parents’ strict no-motorcycle policy and this time around decides to follow the responsible route of taking a rider training course and starting on a docile Suzuki GS500F. We were placed under very specific instructions that my grandparents were not to be notified in any way of his new hobby. Trips past their house had to be done in nothing but a full face helmet, bikes were to be moved behind the house and hidden when visits happened, and cousins had to be blocked of any social media photos featuring anything two-wheel related for fear they would spill the beans.

We managed this for four years with both myself and my younger brother breaking into the sport before my grandmother stumbled upon my dad’s BMW and my brother’s scooter hidden in the garage. I luckily had my sport bike hidden in Kingston and managed another few years of under-the-radar riding. Being the more relaxed half, she was actually pretty okay with it and was brought into the ruse with promises not to tell my grandfather. Since then my dad has been through four generally much more responsible and safe bikes than his original desire had him pining for, and licensed for the past seven seasons. My grandfather passed away a couple years ago, never learning of the hidden hobby, and now the entire extended family is aware of and seemingly but perhaps begrudgingly supportive of our ever-growing collection of two-wheeled vehicles.

Now, some could consider my father (and myself, I suppose) as something of a pack rat. I’m very used to hearing of his various purchases and stalking of local auctions. The home computer always has at least five Kijiji or eBay tabs open, and I’ve gone stateside to collect his purchases on more than one occasion. So I wasn’t surprised or really that interested when I got the text from my mom: “guess what your dad just bought.” I’m generally the one who helps with moving these purchases, or moving things to make room for additions to the collection, so I readied myself for another trip down the basement stairs carrying something large, heavy, and awkward. Images of car dollies, lawn mowers, and tractor parts were pushed from my head, however, when she followed up with a picture of a seemingly unmolested 1979 RD400 Daytona Special.

The bike had been last registered in 1981 and stored by the original owner until now. The engine had been rebuilt once already, and a bubble fairing was installed, but other than that and some questionable handlebar choices it was stock and in what appeared to be great condition. Being on the road for three years, it had accrued roughly 9,000 km before being put away in a barn.

It doesn’t run at the moment, but turns over as confirmed by the many people jumping on and trying to kick it over at the auction. The real kicker is what’s on the rear fender, though, a sticker from when the bike was new, announcing that it was purchased from the very dealer that took the moral high road and sold out my dad to his parents when he approached them for that similar but not quite as cool bike in ’79.

Just coming to the end of a classic bike resto/mod of my own, I was asked to assist in the tear down and rebuilding, so I guess reed valves and expansion chambers are on my radar for the future. OEM or reproduction parts are seemingly plentiful online and a set of mint exhaust pipes are on the way from California, negating what I was expecting to be the hardest bit to find. Maybe my dad still has time for some of that hooliganism and freedom after all. I’m sort of expecting to be asked to keep my grandmother in the dark about this latest purchase again though.