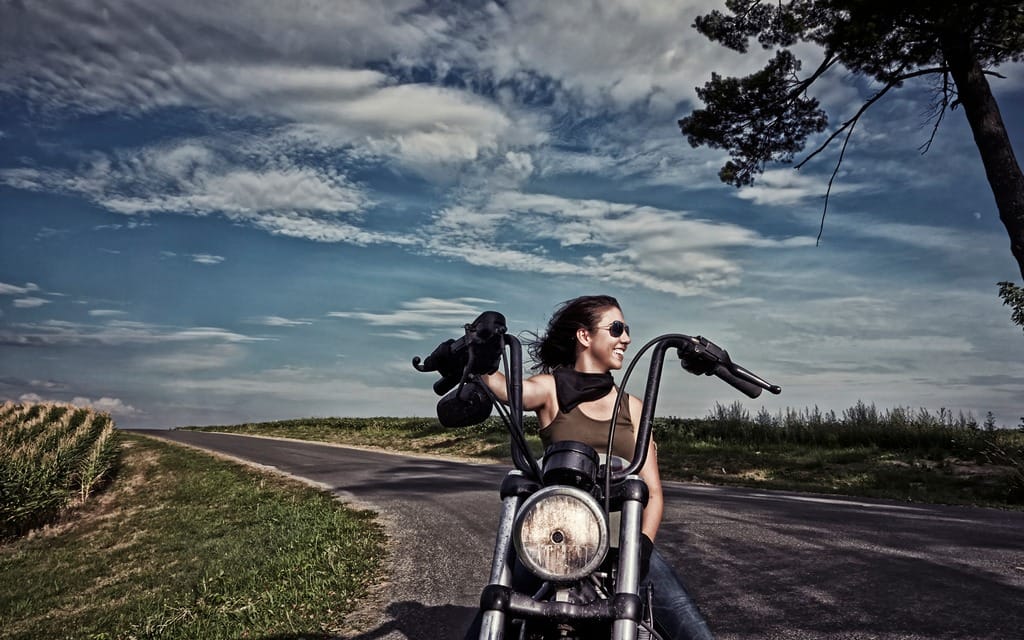 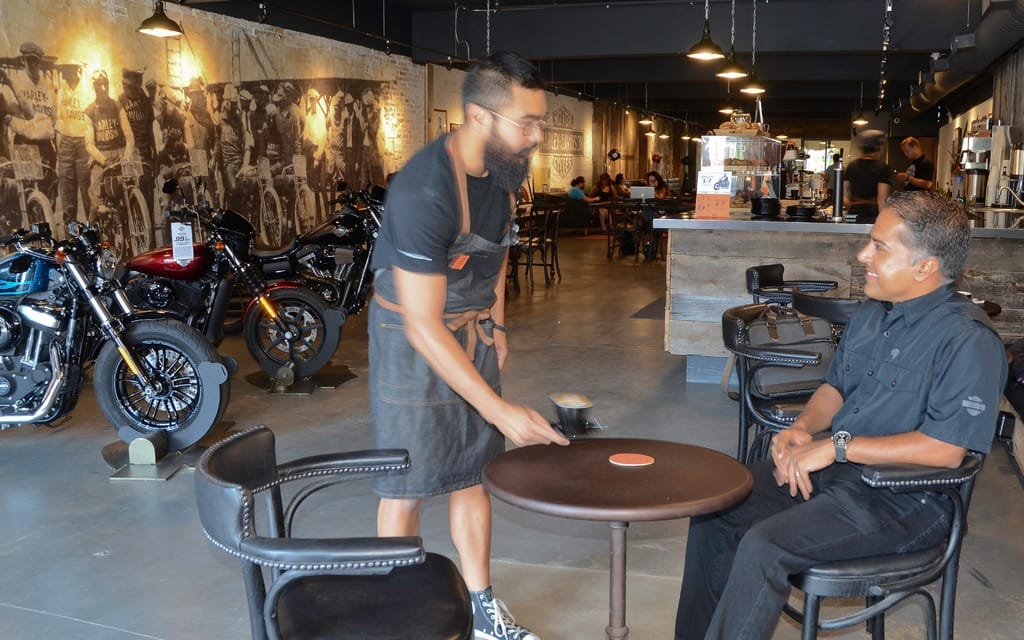 HD Canada opens for business in downtown Toronto, then closes for the winter
The café on Ossington Avenue in Toronto is loaded with beautiful people, so many tall and gracefully hip humans that you wonder whatever happened to Harley-Davidson. Where are the beards, the bellies, the oil-stained boots?

And there on the wall are photographs, big ones, of women who are so far out of my league that they’re not even playing the same game. But at least they’re all on motorcycles. Harleys, on closer inspection, which suits the format because these photos are printed on metal, not paper or plastic, and that’s such an odd thing that even the photographer doesn’t quite know how it’s done.

That would be Dan Lim, who rides a Road Glide, and, drink in hand, tells me he has hung out of all sorts of vehicles to get these shots (I’m reminded of Bill Petro scrunched into the rear of a hatchback, signalling me with his hand to get closer as I ride a test bike about one arm’s-length behind him), and it’s clear that he knows what he’s doing. The photos are gorgeous, the subjects—all pretty young women who he says are friends from the T.O. riding community—even more so, and the bikes, whether photographed in motion or not, are distinctively Milwaukee-made, monkeybars and all.

It’s the middle of September, and the café, called 1903 for the year of Harley-Davidson’s birth, is hosting an exhibit called “Fearless,” which according to Lim describes the attitude of women once they get involved in motorcycling. “Some women are told that motorcycling’s a guy thing. But there’s a transformation in women who take on riding—they gain so much confidence. That was the impetus to shoot Fearless.”

The impetus for holding an exhibit was to sell the pictures. By auction, that is, to raise money for the Canadian Diabetes Association. Lim’s oldest son is the reason behind that. Between sales of these metal photos and the sale of raffle tickets for motorcycling goodies, he raised $10,195 for the CDA on that biker-glamorous evening.

By now, 1903 will be either an empty building or a new business venture. Right from the start, it was scheduled to close at the end of September. After all, if no one’s riding motorcycles, what’s the point of a biker café?

But it’s not quite that, according to Anoop Prakash, who for about a year and a half has been GM of Harley-Davidson Canada. The café called 1903 was intended as anything but a biker café, in fact. First off, it’s situated in an area of Toronto where skinny jeans and storefront coffee roasters are more common than tight asses and cowboy hats at the Calgary Stampede. Everyone is hip, everyone is under 35, and everyone wears Bono’s eyeglasses, whether they need them or not.

But that’s okay. Among these hipsters might be some of Harley-Davidson’s next-gen customers.

“The café has a welcoming atmosphere that we wanted to create,” Prakash told me over mugs of really good coffee (provided by Fahrenheit Coffee, a Toronto roaster). We met there in early August to discuss the café, Harley-Davidson, and the urban motorcycle environment. “If you juxtapose this (café) with the experience of visiting a dealership, a dealership is in business to sell things. If you’re coming in brand new to the (Harley-Davidson) brand, you haven’t had the exposure, you live in the downtown core and you’ve never seen it, going to one of the dealerships right off the bat can be a very intimidating experience, not very satisfying, because someone’s there trying to transact with you, not necessarily to educate you on the history of the brand. And so we thought this was a welcoming way for someone to come in, learn more, hang out, have a coffee.” There was a member of the Harley-Davidson Canada marketing team on site all the time, and coffee customers who wanted to could go out back to the Garage, where a Harley-Davidson motorcycle was mounted on a rig called Jumpstart, so people could ask questions about Harleys and motorcycling and could sit on the bike, get some kind of a feel for the Harley experience.

The café was an experiment, Prakash said. “This is the first one. We wanted to be in downtown Toronto. We haven’t had the brand in downtown Toronto for over five years now.” The area seems ideal for this: along with coffee roasters, there are small, funky shops of all kinds, including Town Moto just down the street, a place that epitomizes sexy motorcycle people and gear. It’s a busy area, old, loud with streetcars and languages, comfortable in the way old shoes are comfortable. The sidewalks are full of people, many of them under 30, and many of them will drop in, get a taste of Harley.

“We haven’t had time yet to open a dealer in downtown Toronto,” Prakash said. “That takes time, you’ve got to find the right partner, there’s a gestation period. So we said let’s get something going, let’s create a meeting place. There’s nothing better than a café to stop at between rides, and it’s been hugely successful so far. And it’s just for the riding season. So we really wanted to be purpose-driven. It wasn’t meant to be getting into the café business, it was meant to be a place for the summer, for riders to come and others who are in the downtown corridor. Get exposed to the Harley brand, you know, and the heritage.”

The café may or may not be reopened next year. “We’ll see. We never intended for it to be a long term kind of thing, so we wanted to see how it would go. It’s been great, because we’ve been able to engage with a whole crowd of people who really haven’t had that opportunity to interact with our brand, to learn about our history. And they’re coming in, they want to know more, and they’re going out back and trying our bikes on the Jumpstart, getting a feel for what it means to even ride. So I think we’re growing the overall sport by getting people engaged like this. These are people who may not even have considered motorcycling as a pursuit.”

While I was there a couple of guys who looked more like traditional Harley-Davidson riders wandered in. “Our core riders are coming in on weekends,” Prakash said, “existing Harley owners are coming here and enjoying it.” It seems that reaching out in this way might be an effective way of introducing younger people to Harley-Davidson while not frightening away the faithful. So, was this a one-shot deal or what?

I asked him if he had ideas. “Honestly there’s nothing concrete. It’s really about taking this café experience and figuring out what we’ve learned over the summer. It’s about how to create a brand experience for young urban riders, or prospective riders in the downtown areas, where usually a dealership is not really a viable option.”

Meanwhile, Harley-Davidson Canada will open more dealerships in southern Ontario. Since taking over from Deeley Harley-Davidson—essentially changing Canada’s operation from that of a distributorship to that of a company-owned branch plant—Harley has been looking at ways of integrating with urban Canadian environments, and Prakash said three new dealerships are scheduled to open in February, one in Oakville near Toronto, one in Saint-Jérôme north of Montreal, and the other in Richmond, B.C., near Vancouver.
And that’s just a beginning. “I’m hoping in the next three years we’ll triple our presence of stores here in the Toronto area, so we’ll go from two to six. Oakville will be the first.”

Along with the evolution of brand marketing, the products themselves will evolve, Prakash said. Already, Harleys are showing up with improved engines and suspension, and that will spread to other Harley models. And, he said, electric Harleys are coming, and there will be a lot of them. “Where you’re going to (initially) see a lot more demand for electric will be urban, but I think that technology, once you invest in it, you’re gonna want to create the entire range.”