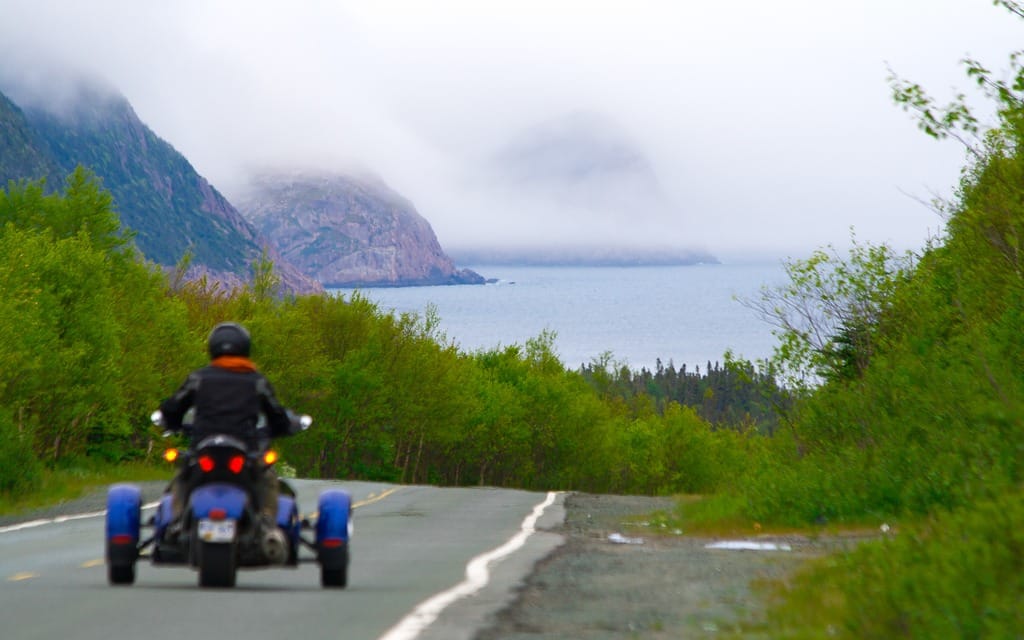 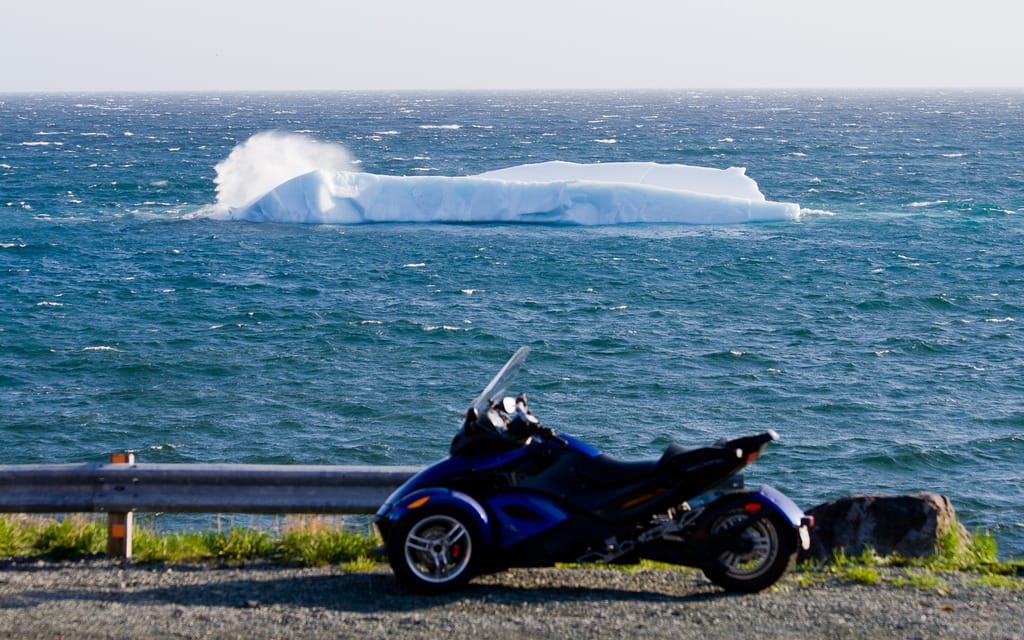 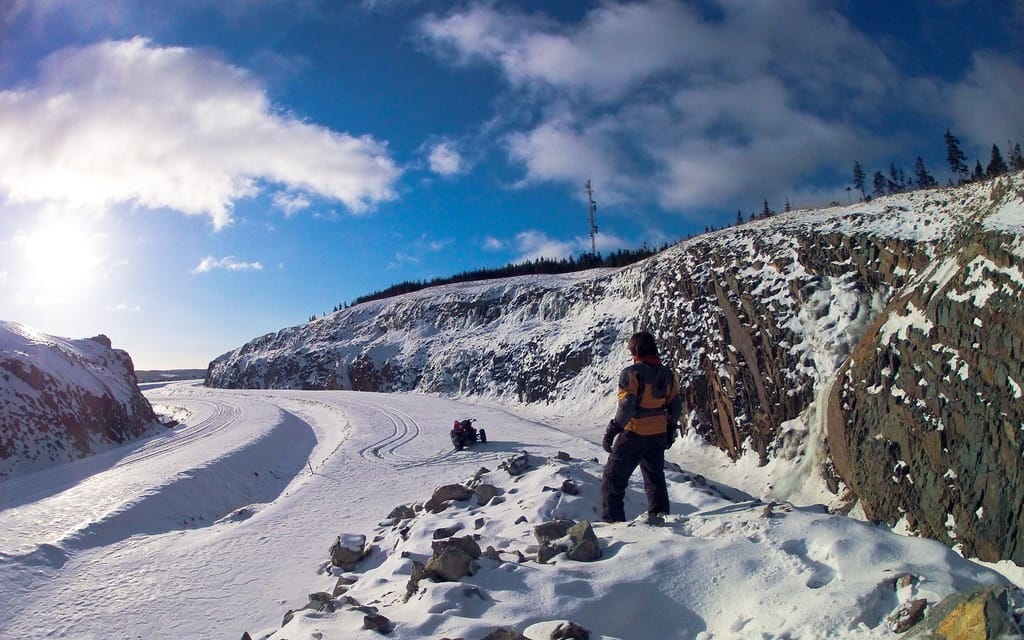 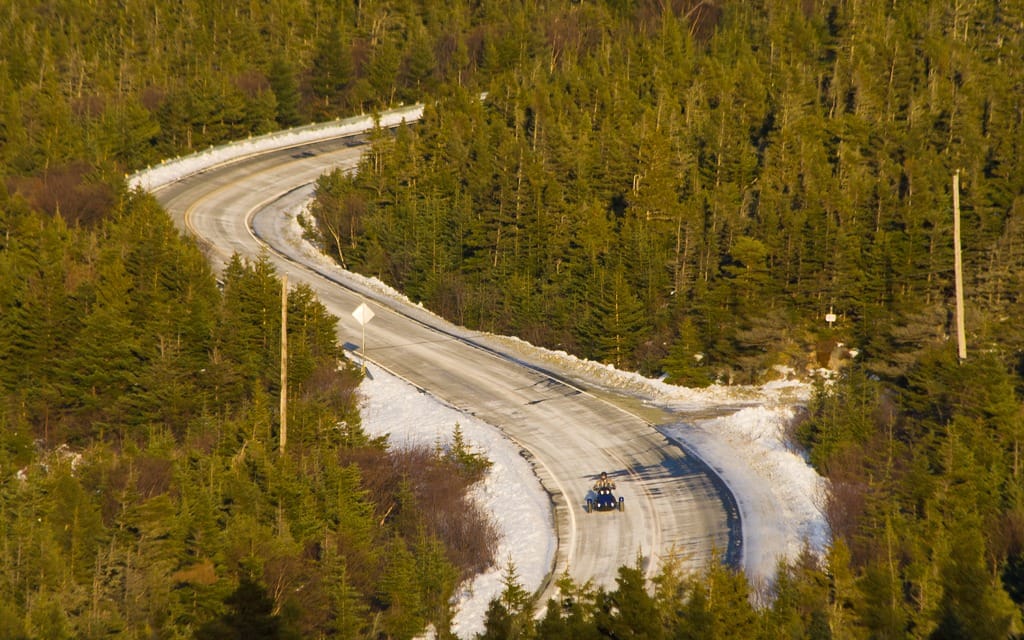 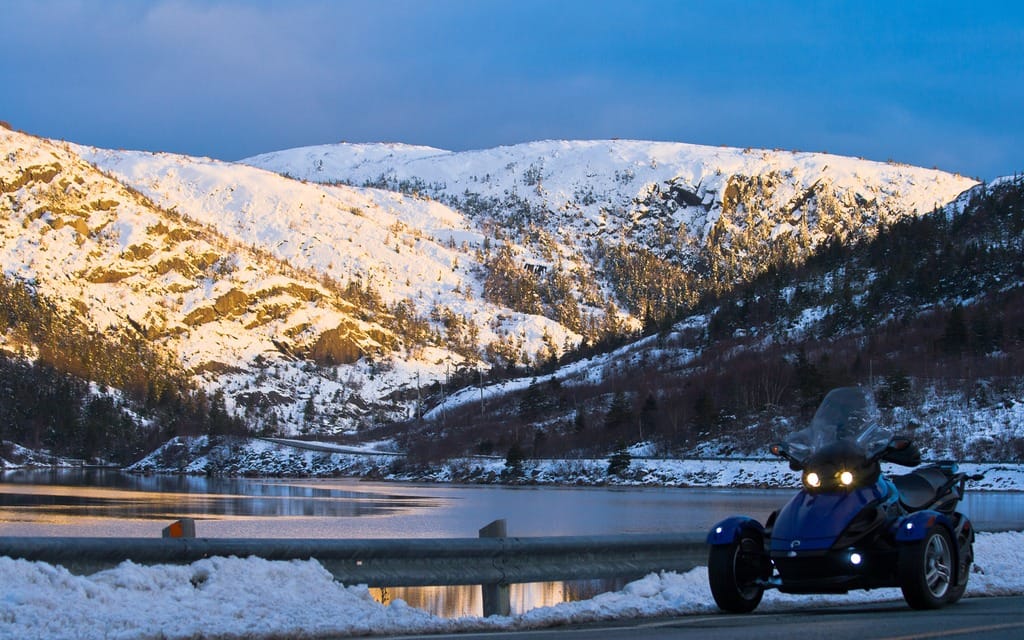 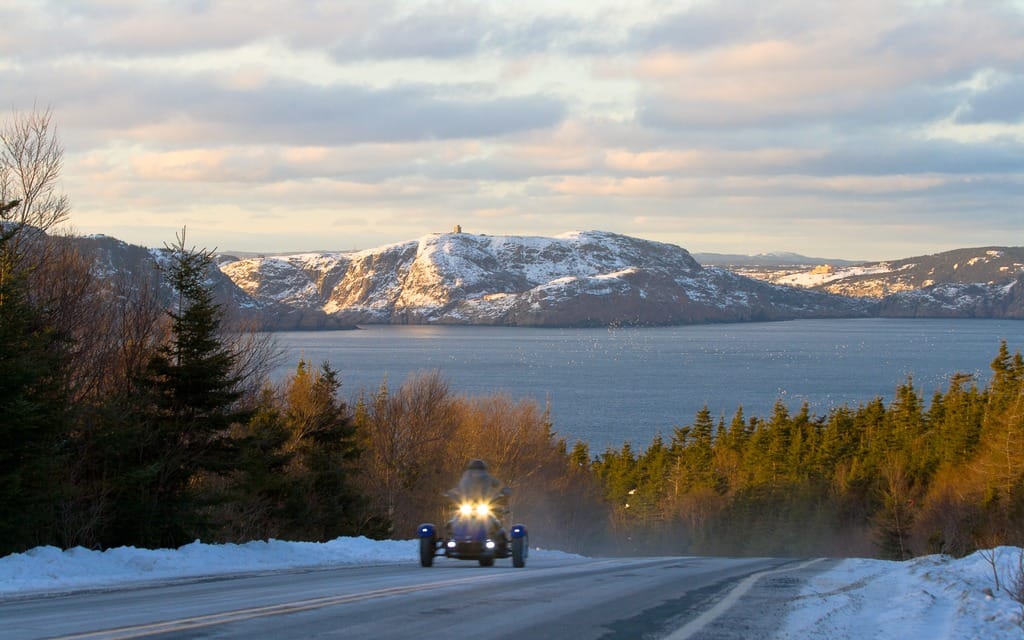 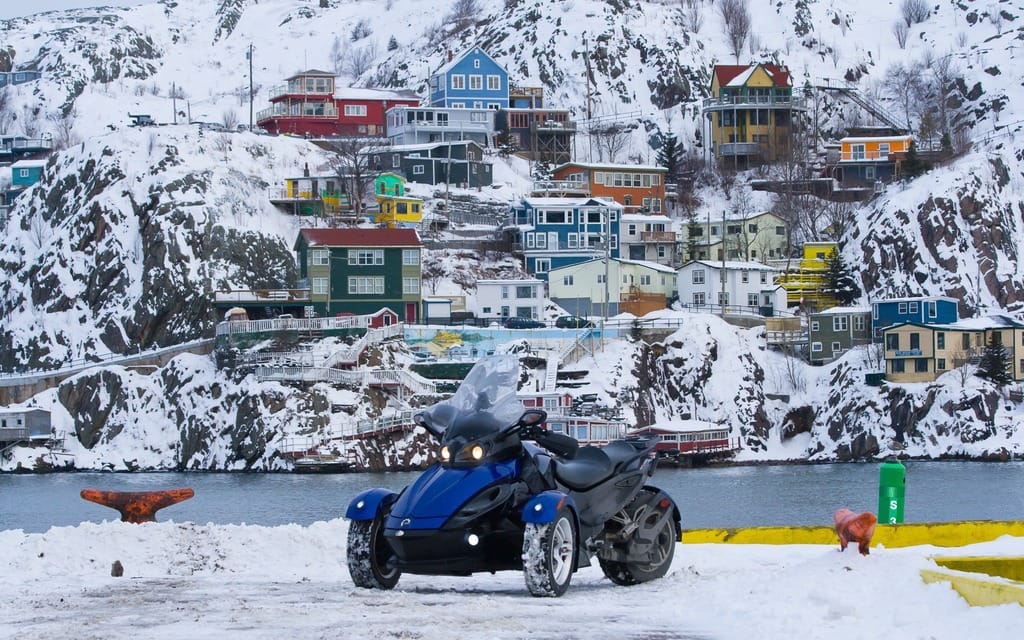 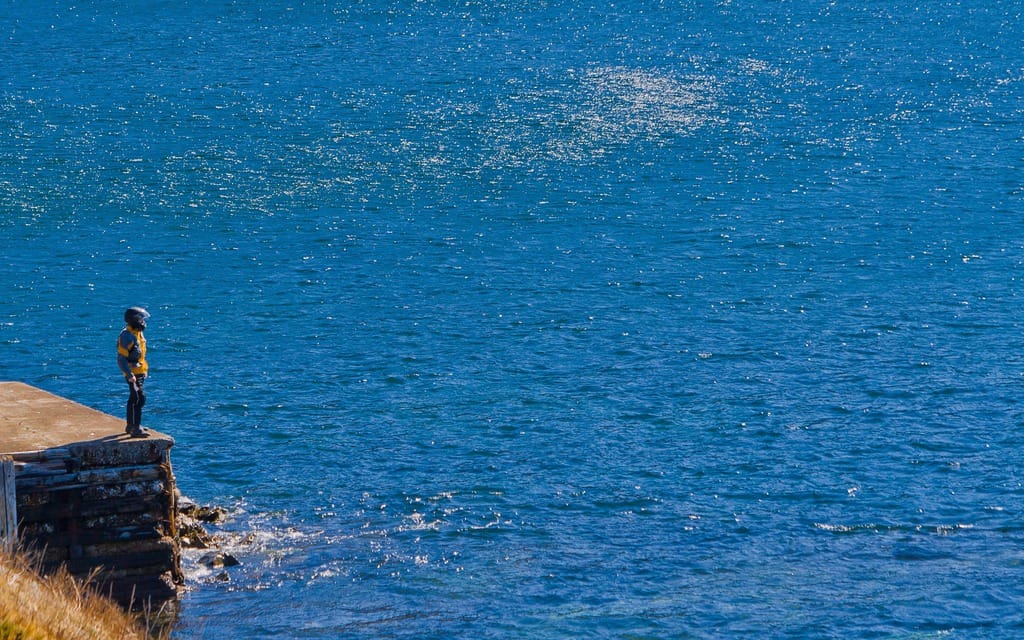 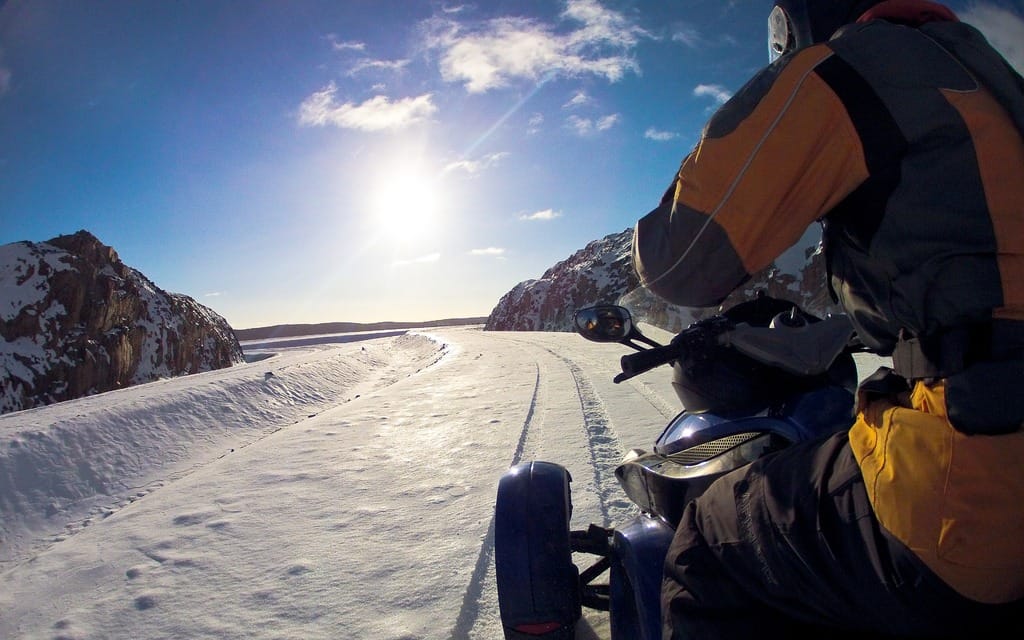 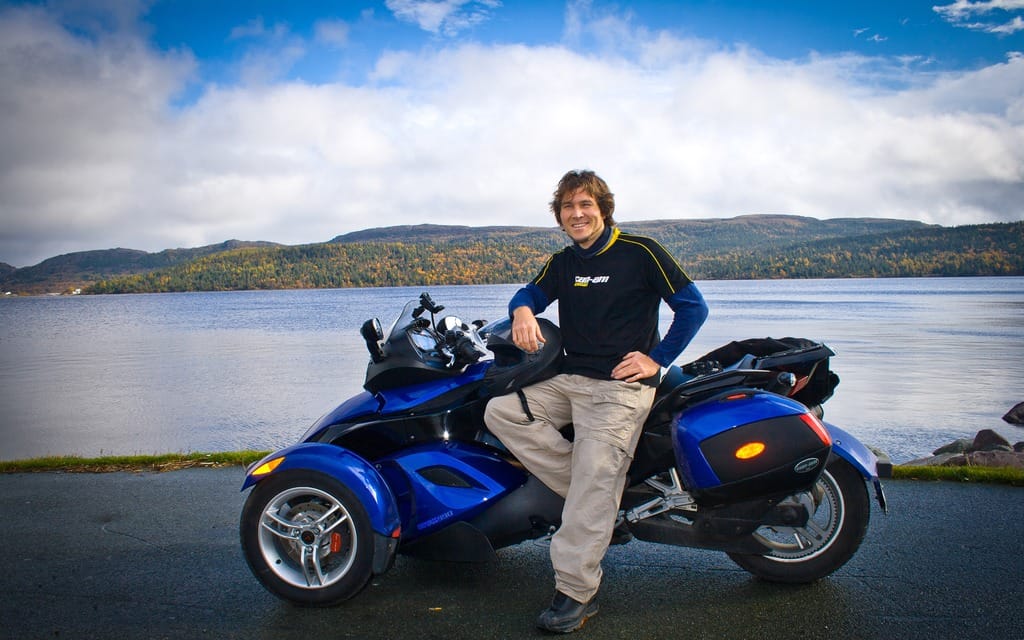 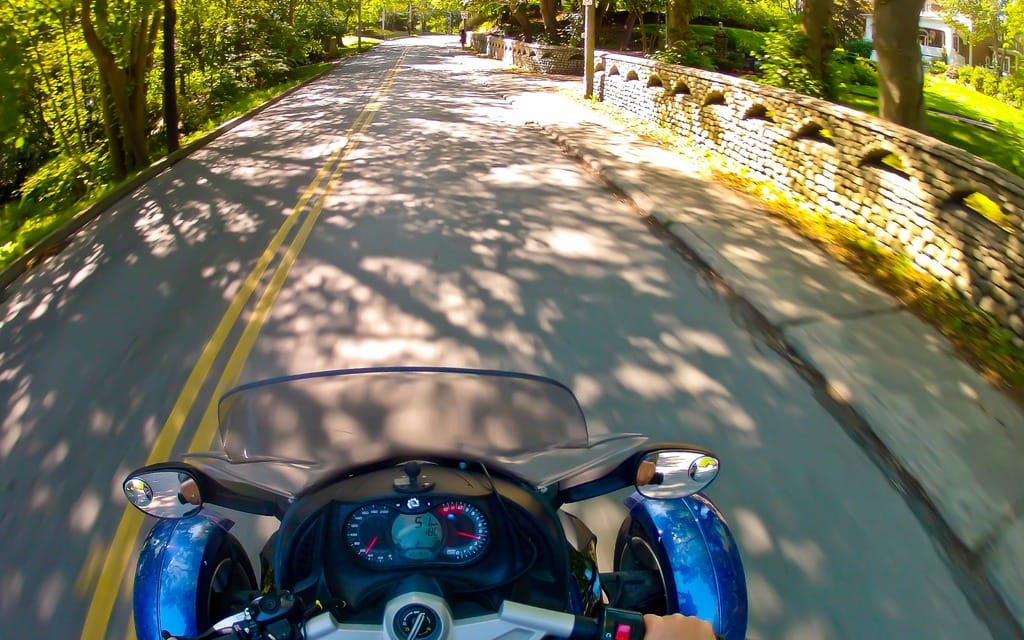 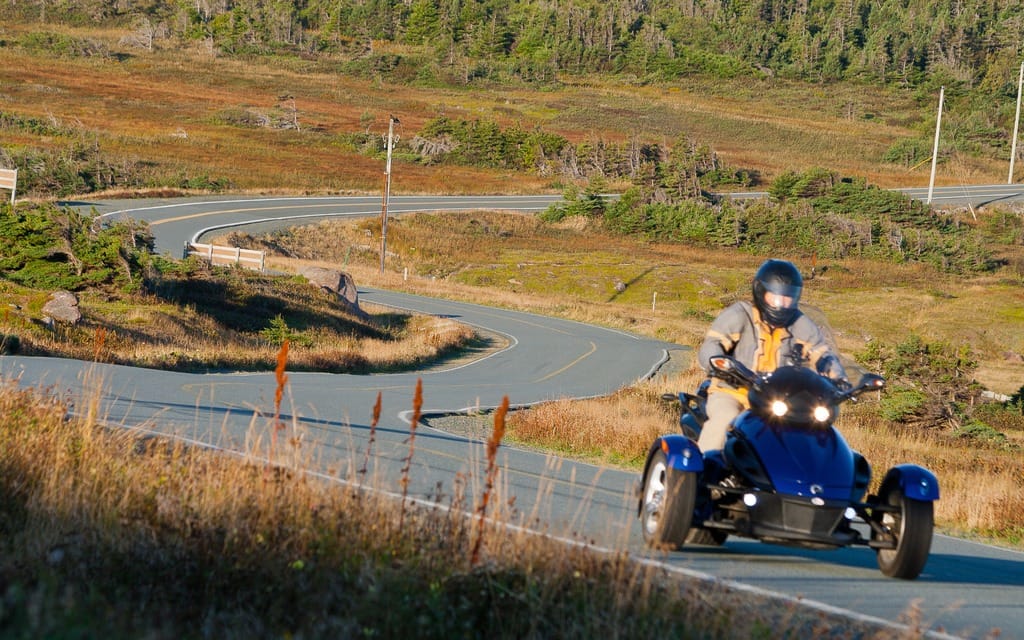 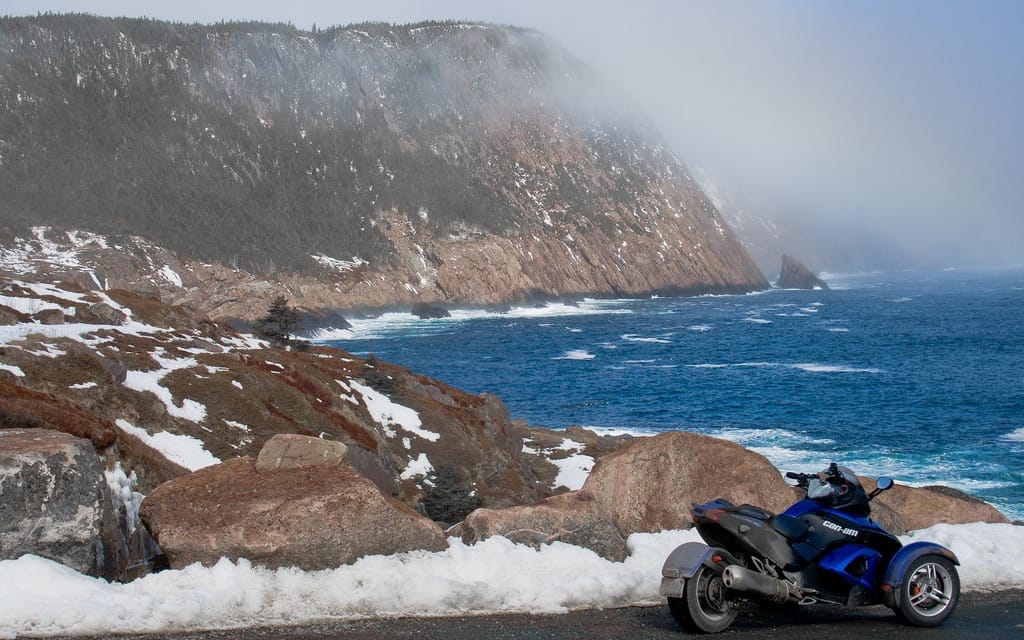 I Brake for Hurricanes

Five years ago I traded my car for a bike, and I haven’t looked back—though I did eventually move from the two-wheeled kind to a three-wheeled Spyder. Now, with few exceptions, I ride every day and everywhere, through all kinds of weather and all seasons, in Newfoundland. This lifestyle transforms the daily travels of life into adventures.

Newfoundland weather is unpredictable. Each season presents its challenges and rewards to the rider, from iceberg season, heavy rain storms in the fall, a fridge-dark winter, to colourful and humid summers. For me, the seasons merge as one, through sun, rain, sleet, snow and ice, through beautiful untouched landscapes, tracing twisty coastal roads and commuting with the chaos of city traffic.

Even the daily commutes to the office are adventures. A typical weekday is waking up with the sun and riding the long way to work. Randomly riding 100 km in the opposite direction is key before heading in. Sometimes those early morning rides are the best part of the day.

When our baby daughter came along, I continued riding, but adjusted it to fit her schedule. When she needed milk and diapers I volunteered to get them. In fact, some of my best rides were spontaneous errand runs. I’ve gone from Carbonear to Corner Brook (right across the province) for a box of diapers. I’d wheel home after riding back across the province, jugs of milk hanging out of my saddle bags, diaper boxes strapped to the cargo rack.

Some rides are planned, like heading around the Irish Loop, or Road to the Shore, but others are totally random; throw a dart at the map and if I haven’t been there before I’ll fill the tank and ride. It’s not uncommon to do 1,000 km in a day.

Winter riding is a matter of survival through surprise blizzards, freezing rain, ice fog, and damp, bone-chilling wind. Regular maintenance is critical, of course, and I’ve added some useful items to the Spyder: an extra large windshield, modified wind deflectors, heated grips, and touring pegs. It’s necessary to pay careful attention to riding conditions, and to protect the mechanics and onboard computer from sand and salt on the roads.

My gear has to do more than keep me warm. My go-to gloves are Coldwaves and BRP Ski-Doo gloves with thick insulation and a wiper on the index finger to clear freezing rain, ice and slush from my visor. The heated grips are invaluable—I’ve tried several types but have always come back to Oxford HotHands. I’ve tried heated gloves but found them too expensive and cumbersome; the batteries don’t last long enough and the wiring for externally powered gloves are annoying. Anti-fog inserts in my HJC helmets help keep my vision clear.

Over the years I’ve become especially fond of my jacket, an orange Firstgear Kathandu that’s water- and wind-proof. When it wore out, I bought another, complete with hydration backpack, built-in hood, vents, extra pockets, removable linear, zipper for zip-in pants and padding in just the right places. My winter pants are waterproof Tourmasters with a removable liner, modified to zip to my Kathmandu. Boots are always waterproof hi-cuts from Tourmaster or Icon. In the summer the jacket vents zip wide open and the liners come out. When summer starts, really around Canada Day, the heated grips come off.

Over time, no matter how many layers you have, cold will ultimately find its way through your suit and into your bones. But in general with the right gear you can make it count. I’m warmer on my bike at speed than the majority of folks walking to the office building from their cars in the dead of a Newfoundland winter but still I plot my winter routes to correspond with coffee shops. The best seat is by the window next to a heater, where I can warm my gloves and keep a watch on the weather.

Nothing is completely predictable, and I have set out on long rides only to be stopped by unforeseen distractions and discomforts. Most times I push through when it’s safe, but I draw the line at riding when I’m fatigued, or if frostbite or hypothermia threaten. I’ve learned to expect things to change, to be flexible, but there comes a point where cold causes the body and mind to drift and you get out of sync. Reaction time goes way up, as does the risk of crashing.

Sometimes, the weather is too extreme to ride, even for me. Hurricanes, torrential rainstorms, and major blizzards have kept me indoors. Over the five years I didn’t ride a total of 109 days, about one in 17. I took the bus or stayed inside with a tea by the fireplace, or completed some much-needed motorcycle maintenance.

After the long, dark cold of a Newfoundland winter the seasons shift to spring, but slowly. March is riddled with sudden snowstorms. But finally the seasons change; spring flowers and sun showers brighten the days. Colour seeps back into the world as flurries turn to rain and frozen waterways shatter in the spring sun. Once again I share the road with other riders. Around Canada Day, summer begins in earnest.

Some time ago, I decided to write about my experiences. I remember my first roadside journal entry: I had earned a day off work, left St. John’s and the chaos of city streets behind, went in search of icebergs off the coast along Iceberg Alley. The journal entry, just a brief few hundred words scribbled on a page, almost wrote itself. I didn’t have to think about it, just had to keep ink in my pen and write faster than the words came to me. Being there on the ride, seeing and experiencing the landscape, formed the words. That was a chilly day riding through unexpected snow flurries and occasional rays of sun late in the spring. My heated grips were on overdrive and still I had to shake the cold off my gloves by waving to the welcome signs of the string of communities along the eastern Avalon.

Eventually, I had compiled a photo book, Evergreen Rider, with 70 photographs, 3,200 words across four main chapters, one chapter for each season. The book is a collection of short narratives of my most memorable moments from the road. Difficult to say which I enjoyed the most, but I think my favourite season is fall. The colours and early morning brisk chill in the air is amazing, energizing. Yet spring is so full of life, a time when warmth and light start seeping back into the landscape. The summer is warm and dry. But it is the winters, so beautiful and challenging, that stand out for me. I remember getting caught in a blizzard that came earlier than forecast, something I don’t want to repeat but relish as a memory. The riding conditions were interesting.

I don’t have the ability to take weeks or months away from work or my domestic life to travel across the country or continent, so I make my motorcycle adventures happen here at home, making every moment count, every day.