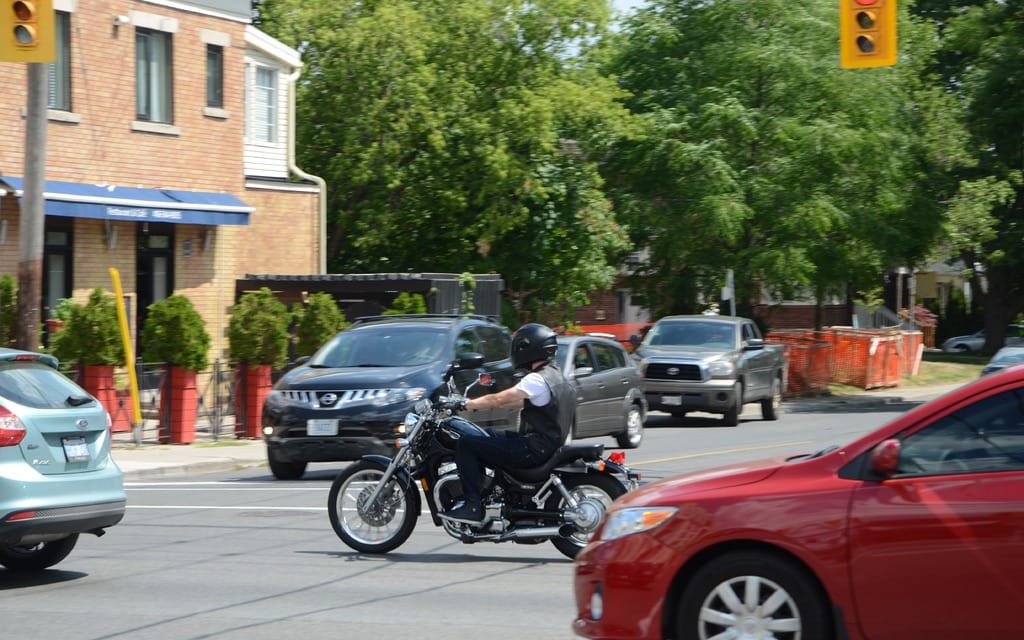 City includes motorcyclists in new Road Safety Plan
A five-year plan by the City of Toronto to reduce traffic collisions and the injuries they cause has snagged the attention of advocates for motorcycling safety because it appeared to give little attention to riders, at least in its original form.

But after a presentation by the Rider Training Institute, the city’s Road Safety Plan was amended in July to define motorcyclists as “vulnerable road users.” That puts riders in the same general category as pedestrians and bicyclists.

The result, at least for this year, could be the placement of road signs that warn motorcycle riders of conditions, such as heavy traffic or sudden changes in road direction, that could make a collision more likely.

The RTI was alarmed to find that the original Road Safety Plan did not include motorcyclists as a distinct group of vulnerable road users, said Sharon St-Croix, executive director of the RTI. They petitioned the City to have that designation included in the plan. The City agreed.

The RTI had been in touch with the Toronto’s Traffic Services division for some time, and had been looking for ways to improve motorcycle safety. Crash statistics pointed to high-risk roads in the city, places where something might be done to reduce crashes. “We visited certain areas in the city where there were a number of incidents that involved motorcyclists, and we had to figure out what was happening,” St-Croix said. “There’s a road out by the Toronto Zoo—it’s one of these really steep, twisty, windy roads, and there’s really no signage there talking about the fact that there’s no shoulder, and it’s a steep incline with sharp turns.” There are others areas in the city where “there would be a sweeping turn, and usually there’s a lot of traffic right after that corner, so there have been incidents where motorcycles have run into the back of vehicles.”

Signs warning motorcycle riders about these conditions might reduce collisions, the RTI reasoned, and so the RTI offered some suggestions for new road signs specifically targeting riders. Samples include warnings to prepare to slow down, that intersections and stopped traffic lie ahead, and that visibility through curves is limited. The City has agreed to a pilot program using these signs as part of the Road Safety Plan’s attack on motorcycle collisions.

But while these signs may remind car drivers that motorcycles are around, they are not aimed at other drivers. In the United States, the Insurance Institute for Highway Safety’s statistics show that 60 percent of motorcycle collisions involve other vehicles, and the stats are likely the same in Canada. In many of those collisions the car driver is at fault, so why not promote signs that warn car drivers to watch for bikes?

Given that the Road Safety Plan is still developing, that could happen. “This is just the very beginning,” said St-Croix, “so who knows what this could develop into? Now that we’re considered a vulnerable road user, motorcyclists will be part of the conversation. And how that develops is to be seen. We have a few things that we would like to see happen.

Motorcyclists weren’t specifically ignored in the Road Safety Plan’s original form, said Sheldon Koo, a senior engineer with the city’s Traffic Services division. The plan identified six key areas where strategies might reduce collision injuries, such as pedestrians, bicyclists, and aggressive driving. “So, previously, motorcyclists were incorporated into the plan through aggressive driving and some of the other emphasis areas, through countermeasures related to those areas.” But now that motorcyclists are considered vulnerable road users, “we’re going to be identifying interventions or countermeasures to deal specifically with motorcyclists.” Koo said the City will continue talking with the RTI about targeting areas where signs warning motorcyclists of danger could be useful, and about other safety measures that could be taken.

He said signs will most likely be put up this year. “There may be other things we can do, too,” he said.