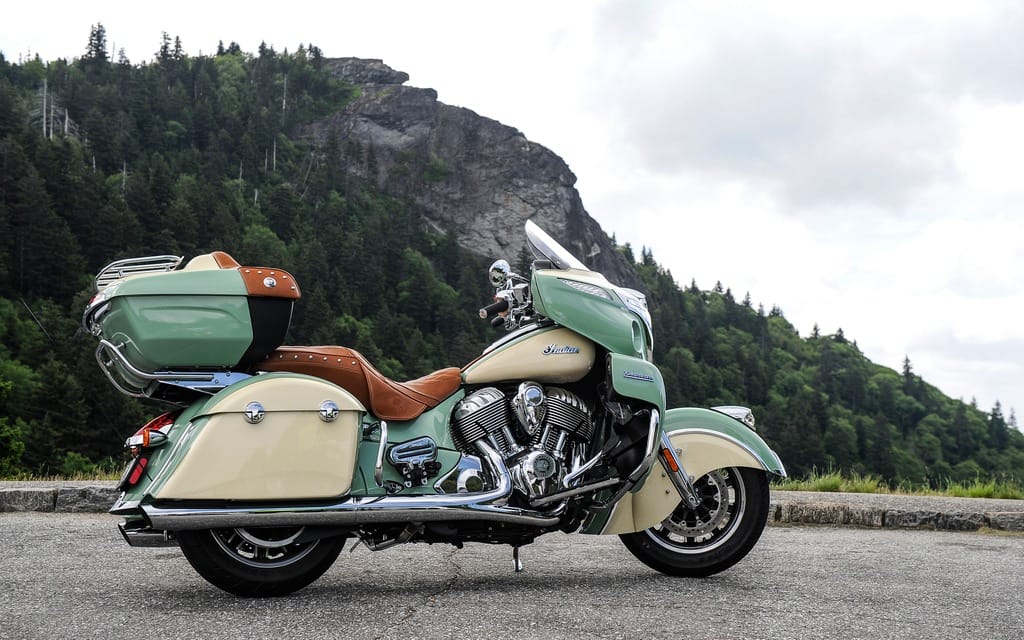 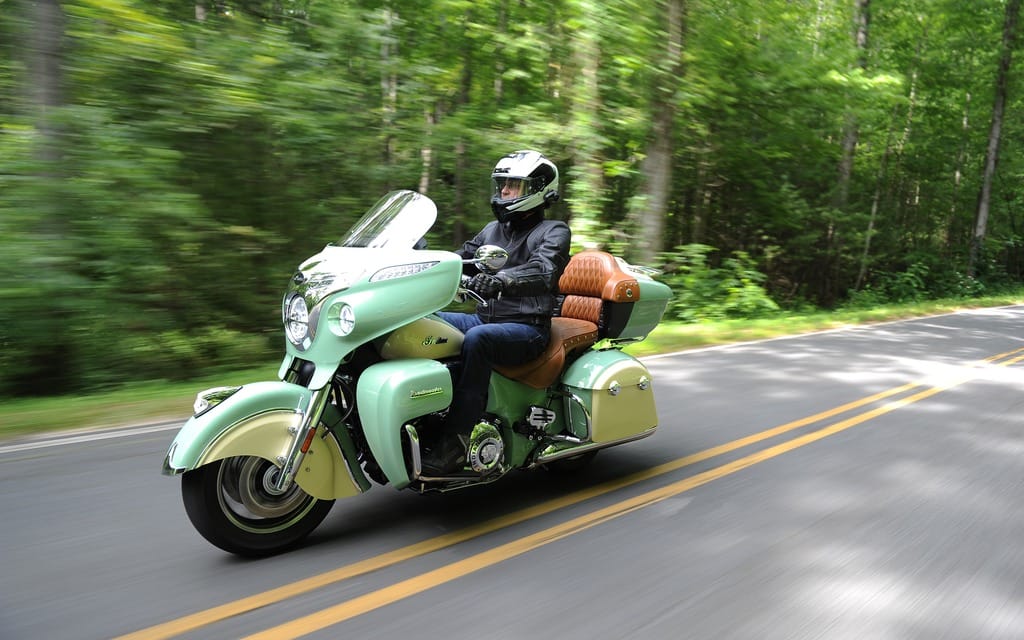 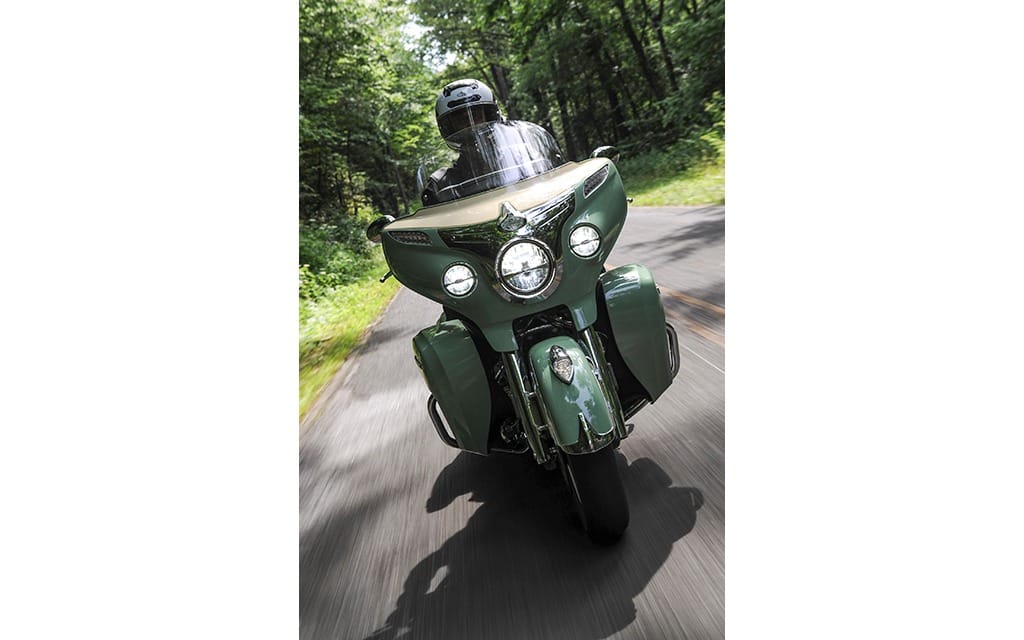 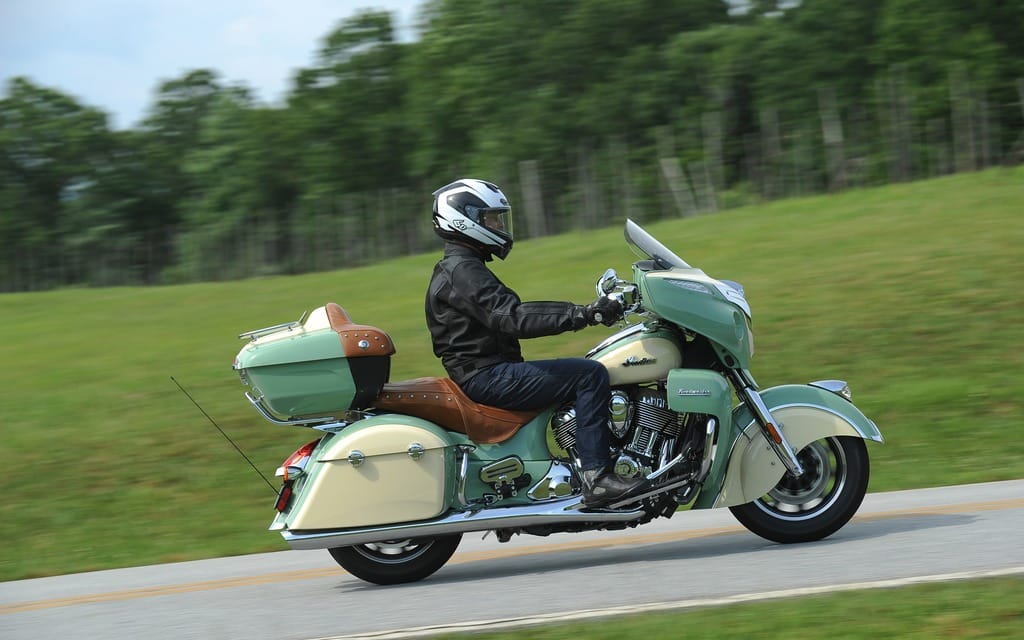 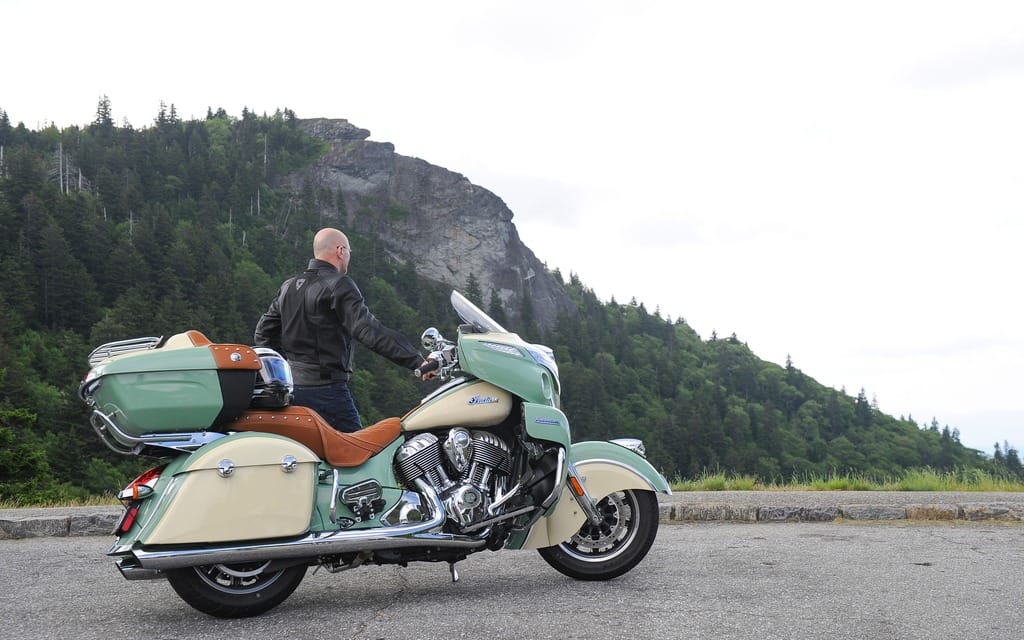 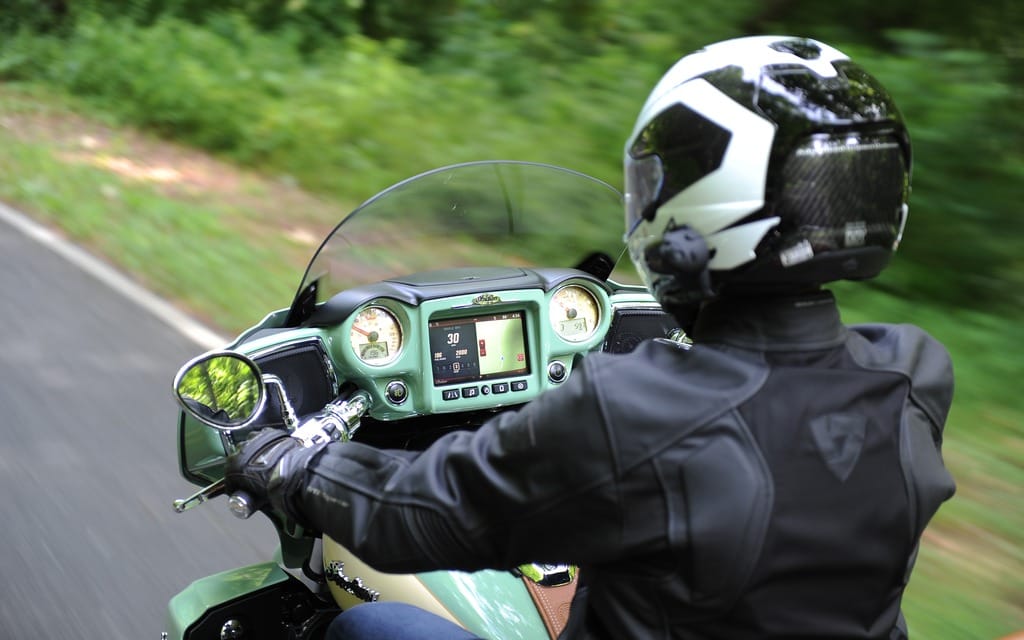 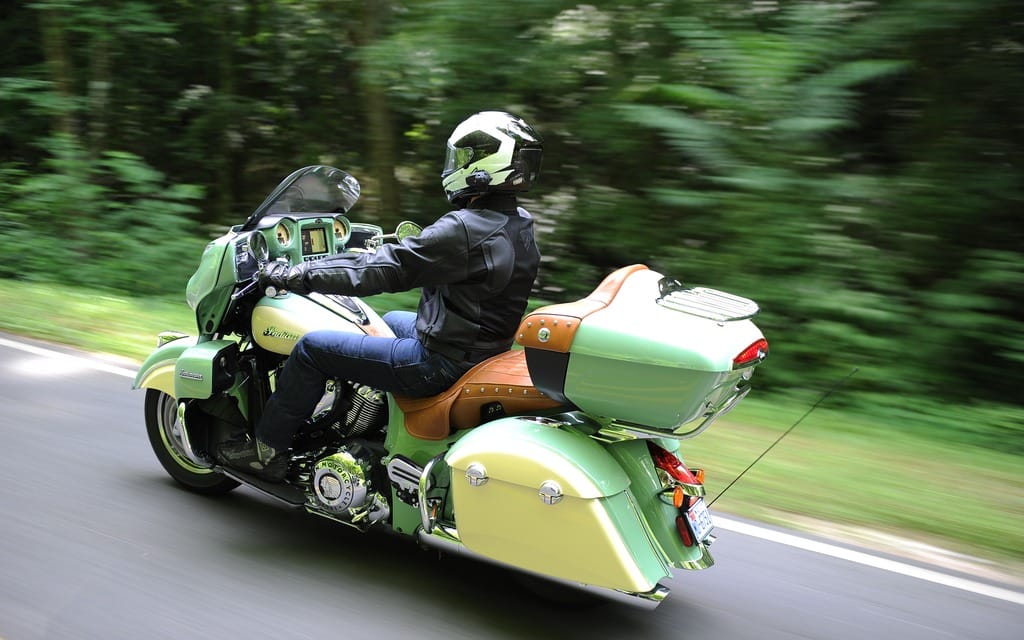 Indian dishes up musical muscle with new Roadmaster
Anyone doubting the importance of the “story” to the success of a motorcycle brand need look no further than the resurgence of Indian. Just three years after being scooped up by Polaris, Indian is outselling the company’s Victory brand — which the recreational vehicle giant has been trying to pedal for the last 17 years — by a factor of three to one. Such is the power of Indian’s legend that it’s survived numerous missteps and false starts — the sacrilegious rebadged Royal Enfield phase, the unfortunate two-stroke minibikes and the more recent Gilroy fiasco that just rebranded Harley-clone S & S engines — and Indian remains the only true competitor to Harley-Davidson.

And what a story it’s been. The company was founded in 1901 — yes, before Harley-Davidson — in Springfield, Massachusetts, and the history of Indian and Harley is as intertwined as the stories of Ford and General Motors, Bush and Gore, and, well, Muhammad Ali and Smokin’ Joe. Indeed, until the end of the second world war, there was some question as to which was the superior product. And, even if history tells us that Milwaukee won their internecine battle — Indian went bankrupt in 1953 — it remains that Chiefs and Scouts are as much a part of motorcycling lore as Sportsters and Electra Glides. That Harley-Davidson still considers Indian its number one competitor despite an absence of some 60 years is testament to the power of this storied marque.

That leaves a lot for the latest Roadmaster to live up to. As it was in 1947, the Roadmaster is essentially a Chieftain with a touring top case and a larger fairing (more specifically a larger, electrically adjustable windshield). That means 111 cubic inches (which converts to a Harley CVO–like 1811 cubic centimetres) of torquey V-twin, an impressive aluminum cradle frame and enough retro styling to make you think you’ve been Michael J. Fox’d Back to the Future.

Said retro styling masks a very modern motorcycle. The Thunder Stroke’s cylinder finning, for instance, may be the perfect carbon copy of a ’53 Chief’s and the angle between the cylinder banks an identical 49 degrees but the cylinder head design is remarkably modern — said to be influenced by the Corvette LS7’s “wedge” combustion chamber — and the cylinders are Nikasil-plated for long life.

It’s a marvel of modern civility despite not (yet) being liquid-cooled. The loping idle is calm, the engine impressively smooth at speed (thanks to a single counterbalancing shaft) and powerful thanks to its claimed 119 pound-feet of torque (like Harley, Indian declines to release horsepower figures, but it expects 75 to 80 at the rear wheel). You wouldn’t want to call the response to throttle immediate, what with a flywheel only slightly lighter than a manhole cover, but given a good whack with the right wrist, the Roadmaster surges ahead with alacrity. Performance wise, the Thunder Stroke trumps all but Harley’s latest 110 cubic inch version of its CVO twins. Throw in a slick-shifting six-speed trannie and you have a powertrain only spoiled by the heat emanating from the rear cylinder.

Indian took us to North Carolina’s Great Smoky Mountains during this summer’s heat wave, which made our stint on the Roadmaster a little like riding a pot-bellied stove. The rear of my right calf, in close proximity with the rear cylinder’s exhaust header, was slowly cooked to a medium rare. No exaggeration — I came home with a couple of small burns. Indian attempts to manage cooling the beast via vents in the front lowers. But the Thunder Stroke is, after all, a big air-cooled lump pulling no less than 414 kilograms (yes, a 912-pound motorcycle) and while all that torque makes up for its avoirdupois, the big V-twin still has to work hard. Thankfully, the lowers can be easily removed — just three bolts — allowing a free flow of air past your lower limbs to cure the spit-roasting problem. Impressive, however, with all the heat being generated is that the air-cooled Thunder Stroke never “knocked” once despite its healthy (for an air-cooled big-inch twin) 9.5:1 compression ratio. The sophisticated engine management system would seem to retard ignition timing quickly enough to prevent deadly pre-ignition.

All that aforementioned weight affects handling, but thankfully only at very low speeds. Nonetheless, low centre of gravity or not, the Roadmaster is a handful at parking lot or U-turn speeds. Caution is the order of the day when creeping along; if this beast gets away from you, you’re not catching it unless you’ve got the quadriceps of an Ahhnold Schwarzenschnitzel.

Once above five kilometres an hour, though, the Roadmaster is a marvel of balance and poise. It is a little slow steering — again, all that weight — but turn-in is precise and it will hold its line even over raggedy-ass pavement. The 16-inch Dunlop Elites — 130/90-16 front and 160/60/16 rear — have more than enough grip to drag the floorboards.

The suspension — a beefy 46-mm fork up front and a single shock in the rear — is well calibrated for comfort and moderate hooliganism (floorboards were dragged on North Carolina’s Blue Ridge Parkway). The only adjustment available — air pressure that elevates both the spring rate and preload in the rear shock — is accomplished with a small, bicycle-like air pump, which is standard equipment. It’s actually not all that inconvenient, requiring the removal of just one side panel, and the pump has a built-in pressure gauge. That said, something like the Triumph Explorer’s automatic self-leveling suspension would work wonders for the Roadmaster — all touring-oriented cruisers, in fact — which is likely to see wildly fluctuating loading. I’m not suggesting that cruisers get complicated electronically adjustable suspension systems, just that some mechanism that automatically revises the rear preload whenever a passenger climbs aboard would not be remiss.

It would be a welcome addition because the Roadmaster is otherwise a comfortable beast of burden. The wide seat provides excellent support, the feet-forward floorboards are, well, not too far forward, and the wind control is excellent for something that looks like it was designed without the use of a wind tunnel. It’s got the only handlebar fairing with an electronically adjustable windshield, according to Indian, and in its tallest configuration the screen cocoons the rider without buffeting. Lowered, there is more turbulence not just because of reduced screen height but because the air vents that are uncovered in its topmost position and which smooth the air flow are pretty much blocked when the screen is fully lowered. The Chieftain, which uses the same fairing with a shorter windshield, offers less turbulence — at the expense of coverage — and its screen should be interchangeable with the Roadmaster’s. Indeed, Indian offers many screen options for both.

Equally impressive is the Roadmaster’s luggage set. As outwardly retro as the saddlebags on a Harley Electra Glide, the Indian’s bags are much easier to use and have a more posh interior. There’s even a power outlet back there for heated vests and the like.

The big news for 2017, however, is that Indian finally has an audio/telematics system to rival the Boom Box 6.5GT that Harley offers on its top-of-the-line baggers. It’s an impressive system, full of neat features — easily swiped split screens, pop-down screen options, a 200-watt audio system, etc. — and excellent graphics. Indian also says the seven-inch capacitive touchscreen is the largest — and, at 800 x 480 pixels, the highest resolution — in the business. Making it even easier to use are well-laid-out volume and tuning controls for the audio system and two conveniently located toggles — left for reject, right for accept — at the back of the throttle and clutch switchgear housings that make control that much easier. Especially impressive is the “customizability” of the screen. The map can be full screen, split into a paired screen with other functions or dispensed with altogether as there is plenty of other information to display. With a swipe of even a gloved hand the screen modes can be changed, one mode showing bike data (tire pressure, etc.), for instance, and another, ride data (including elevation which can be reset to see how high you’ve climbed). It’s all very customizable. In demonstrations, it is positively phantasmagorical.

I can’t quite give it the ol’ two thumbs up, however. I tested the Roadmaster about six weeks before the July 26th roll-out of the 2017 model — the Indian Touchscreen Infotainment system meant to be the highlight of the press preview. Unfortunately, there were still quite a few bugs in it. Two bikes — one mine, another ridden by an Indian executive — locked up completely and a few more people complained that it frequently dropped Bluetooth access to helmet-mounted communication systems. Maintaining continuous connections with iPhones proved especially problematic. When it worked, it was wonderful. Chances are it will outdo Harley’s Boom! System . . . when it’s finished.

Other electronic gear, however, is well sorted. The audio system — tested after I gave up on the Bluetooth headset — proved high-powered enough to hear at 130 kilometres an hour with the screen down. And Indian’s cruise control system allows gentle deceleration — as opposed to the abrupt slowdown common to most motorcycle systems — thanks to a unique method of slowly closing the throttle butterfly. Just roll the throttle back past its idle position and the Roadmaster slowly cuts power. It may not sound like much, but it’s a significant improvement over other two-wheeled cruise control systems.

Technical foibles and heat issues aside, Indian’s latest Roadmaster is an impressive piece of kit. It’s attractive in a slightly overwrought, Art Deco kind of way, the engine is way more sophisticated than its short heritage — Polaris only took over Indian five years ago — would suggest, and there’s a build quality to every single inch of the Roadmaster that is at least the equal of an Electra Glide’s.

And, of course, it’s got that back story that even 60 years spent roaming motorcycling’s wilderness has failed to diminish.

Prices for the 2017 Roadmaster had not been released when this was written, but you should expect an MSRP around $35,000, and expect to see them in dealerships right about now.