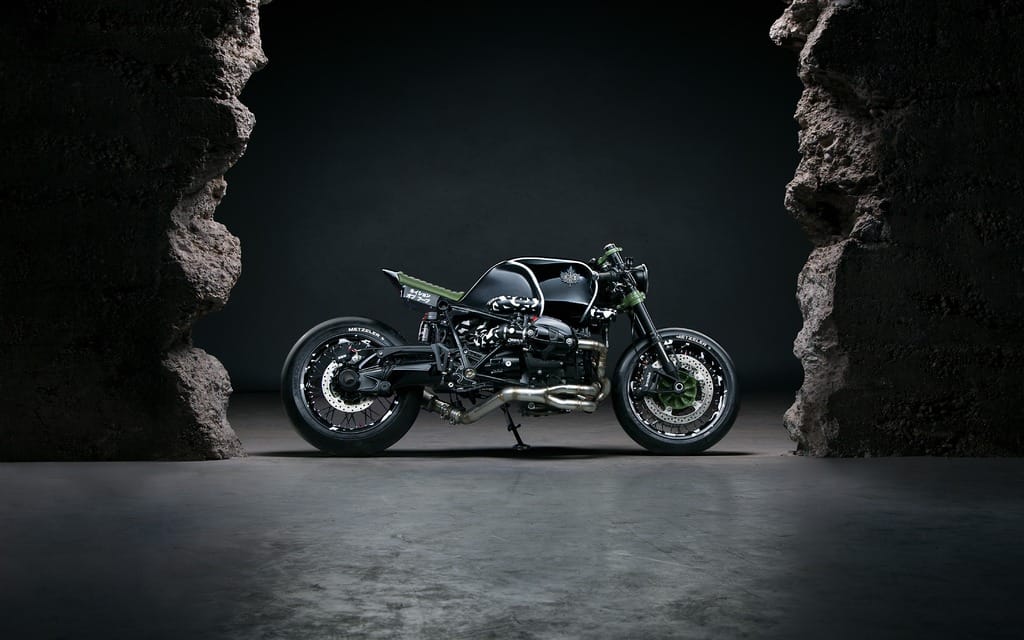 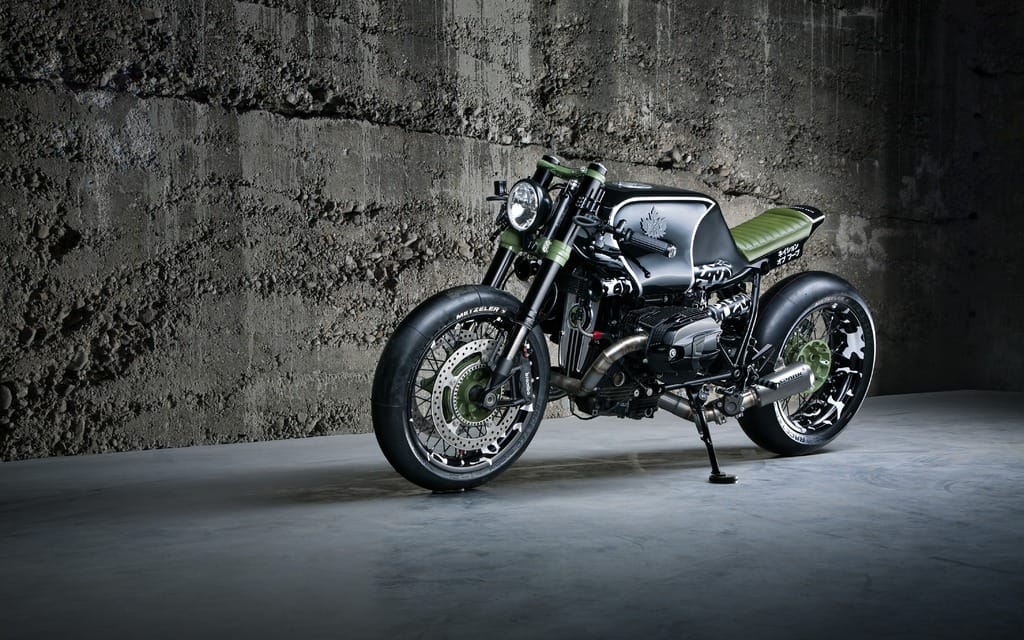 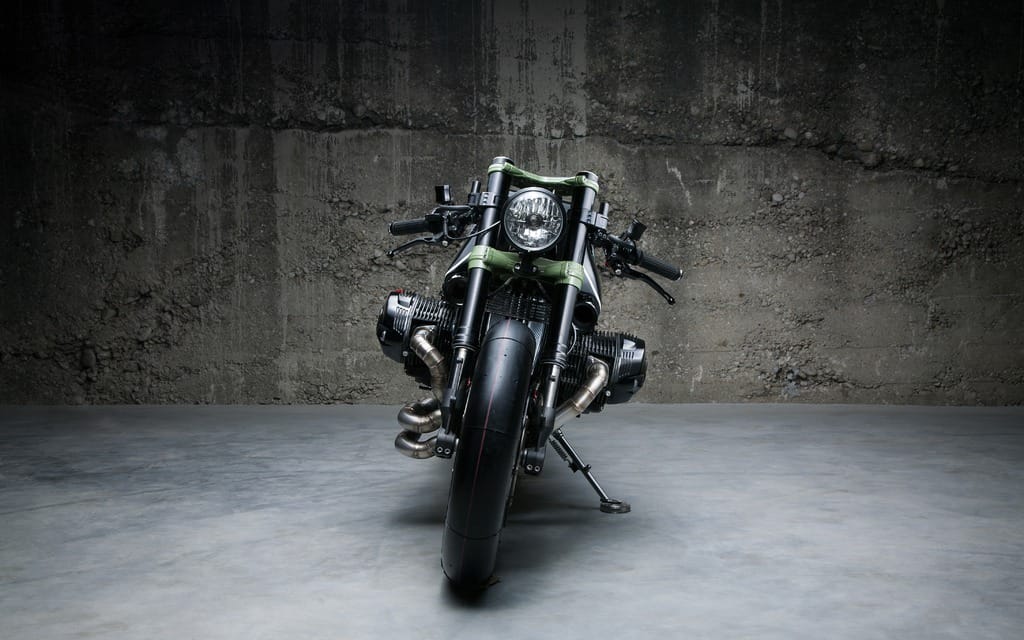 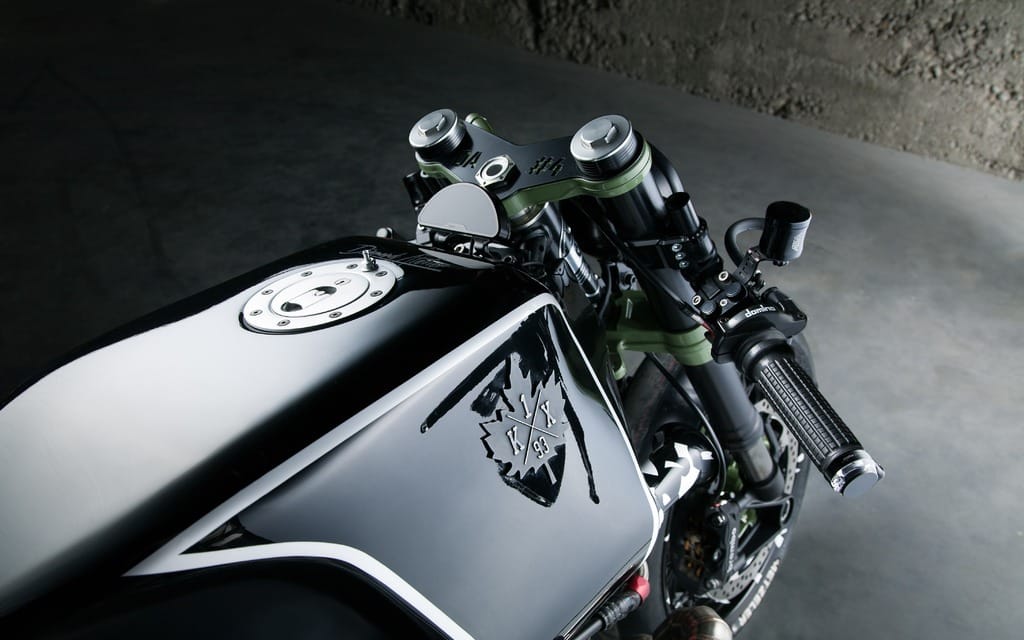 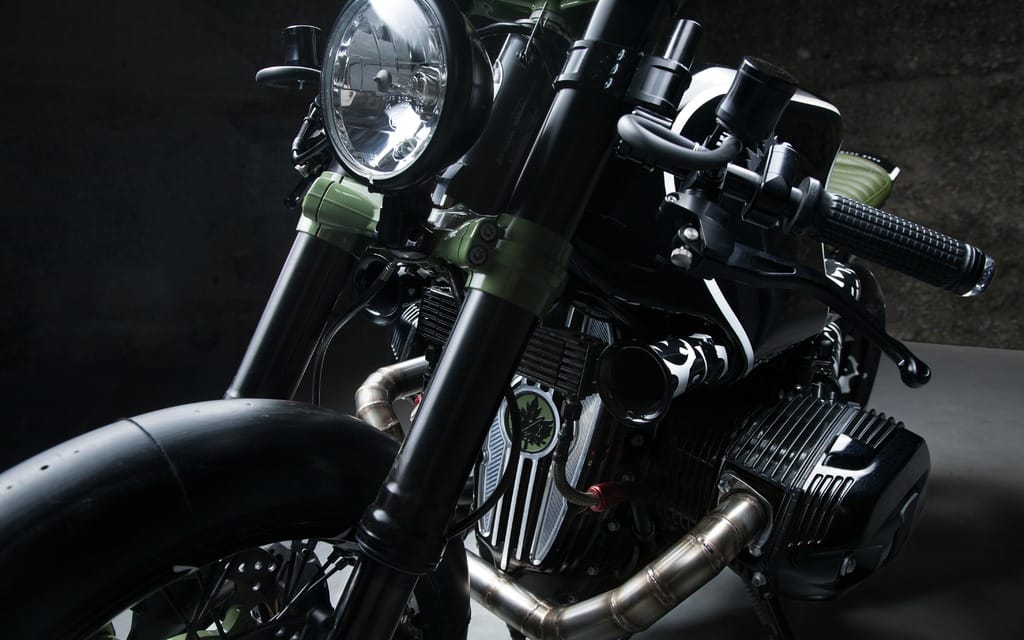 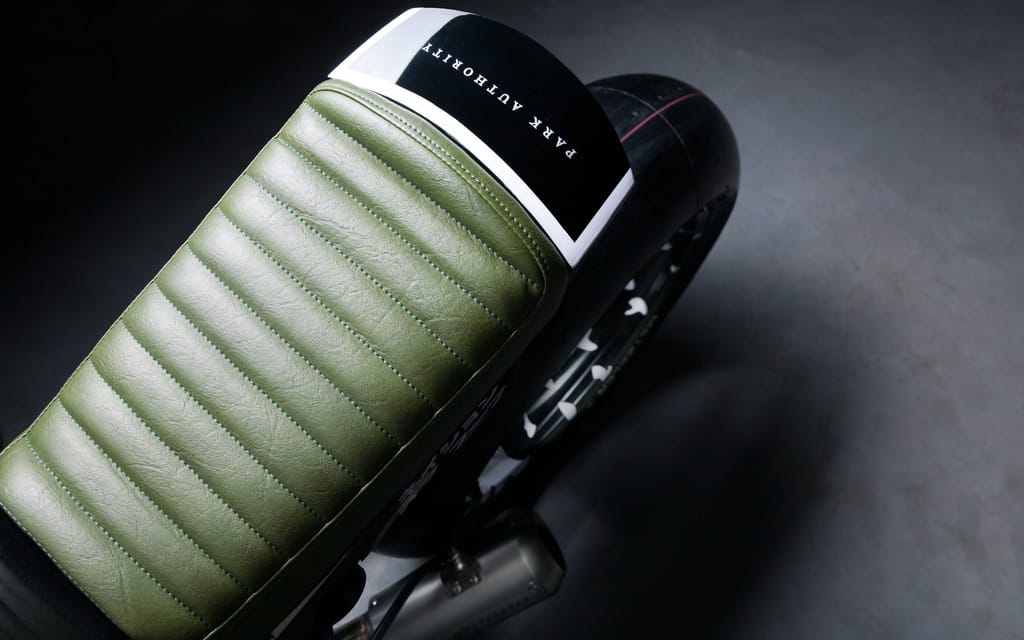 What kind of custom bike you could build if money and skill was no object?
By Martin Hodgson of Pipeburn.com

Evolution always seems slow for the living. They are blissfully unaware of any new creatures rising up, until a swarm of better beasts takes them down as they are going about their daily business. From the post war Hogs on the interstates in the USA to the Motorway Cafes of a Rockin’ ’60s Great Britain, the commuter class that was previously afraid of us has grown accustomed to these stalwarts of the custom motorcycle scene, as generations of bike builders have followed their founders’ leads. But in an increasingly urbanized world, a new animal has emerged from the city streets of Munich; two of its favourite sons have joined forces to put their signature touches on Bavaria’s most famous brand and created a revolution, codenamed “DA#4.” Prepare to witness first-hand the birth of the “Neo-Racer” genre.

With iconic German basketball brand K1X set to release their new “Core” collection for 2016, they sought out fellow Münchners Diamond Atelier, run by the young-gun bike builders Tom Konecny and Pablo Steigleder, to build them a custom motorcycle that would really capture the world’s attention. Their Germanic origins made the choice of a ’15 BMW R nineT an easy one, but from then on pretty much nothing about this build would be simple. Most cafe racers based on modern machines are a compromise between the old and new, often drawing visual inspiration from machines decades old while stripping back the technological aids that make the modern motorcycle the very beast it is. But Diamond Atelier’s DA#4 is uncompromising in embracing new technologies: complex electronics, a four-piece frame and model-specific tools were never seen as hurdles, but just the way the future they’re building is going to be.

K1X is no play-it-safe brand that’s full of neutered, clean-cut ambassadors; bold colours and collaborations with the likes of NBA bad-boy Ron Artest is how they play ball. So to kick off the build, Tom and Pablo knew that ditching the stock tank was a great way to show old was out. The new, hand-formed aluminum piece throws away the idea of decades of narrow R-series tanks for a set of broad shoulders that lowers the bike’s central mass. Instead of fearing the BMW’s complex intake, they embraced it with an improved version of their own. Forward-facing aluminum velocity stacks form part of a single piece aluminum inlet tract one each side that snakes through the metalwork and into the engine. The K1X tank badges are cut from 100 g sterling silver and fittingly Tom and Pablo attached a 0.17 carat diamond into the redesigned upper triple clamp because, like K1X’s ballers, they love their bling.

The single piece tail unit is a multipurpose aluminum marvel that acts as rear guard, seat support and additional electronics housing for the cleanest of clean lines. With the fabrication work done, the bike’s colour and style needed to draw more from the K1X brand. “We checked out their lookbooks, clothing lines and stores to get a better feel for where to aim with this build,” says Tom. “After just a few successful meetings, we came up with a rather fresh colour combination that references their upcoming 2016 fall/winter collection.”

The bold gloss black on the tank sets the overall tone of the bike, but it’s the highlights that really make it come to life. Olive is used on the wheel hubs, triple trees and even on the hand-stitched leather seat while the K1X signature “speckle print” is used on the rims and air intake. White pinstriping and graphics were then applied by hand to the tank and tail to further accentuate their lines, with some matte black applied to the knee scallops to add visual depth. The shaft drive was removed with a special set of BMW’s factory tools and painted, along with a bespoke CNC’d alternator cover, with the K1X logo in olive. A set of AC Schnitzer rearsets completes a fine collection of German precision engineering.

Even before it was completed, the DA#4 had been invited to race at the 2016 Glemseck 101 sprint, where it will be competing in the entirely new “Essenza” class on the 1/8th mile strip against a host of big dollar machines. Here looks don’t count — but horsepower does — and extracting more ponies from the 1170 cc boxer twin was something Tom and Pablo always had in mind. With the ever-more restrictive Euro compliance exhausts sapping fun like a cop at college party, an entirely new 2-into-1 system was crafted to make things right. From the stunning hand-built headers to the Spark GP muffler, you couldn’t wish for a meaner, more cutting-edge set up. Like those before them, they could have deleted the exhaust valve and its electronics, but instead the modern technology is retained and used to improve low-end torque and throttle response. But to do so and also make the most of the other breathing modifications, the high-tech duo hacked the standard ECU to give it a full reprogram that resulted in more power throughout the entire rev range and crisp fuelling.

To get that power to the ground is a serious set of rubber — the uncompromising and seriously bad-ass Metzeler Racetec Slick CompKs that provide extraordinary levels of grip. But to connect the chassis to such a mean set of tires requires a suspension setup capable of race level tuning — naturally Diamond Atelier haven’t let the BMW side down here. Up front is a pair of Wilbers Blackline forks that provide the ultimate in low friction design with a huge range of adjustability for precision steering control. While planting the big rear slick onto Mother Earth is a Wilbers Blackline shock with high and low-speed compression control, max out valve relief and enough tunability to allow you to feel the road like a record player feels vinyl. All of this means the DA#4 can handle some serious corner speeds, so slowing things down when the party gets a little too crazy is the original yet rather impressive BMW hardware, with the special addition of an ABM radial brake cylinder that feeds through ABM’s own braided lines.

When it comes time to add functional accessories to the build, a Neo-Racer naturally embraces minimalism like the cafe bikes of old, but does so in a truly 21st century manner. Rather that ditch a bulky instrument cluster and rely on the seat of the pants, the Neo utilises the latest technologies to fit all the information you need in a tiny package. On the BMW, this is complicated by the fact that the R nineT uses a CAN-bus for all its electronics and it doesn’t take too kindly to being messed around with. Unfazed, Tom and Pablo put their millennial skills on display by outfitting the bike with a full array of Motogadget accessories including one of their beautiful Motoscope digital displays.

The ultra-low-slung ABM Multiclip clip-ons wear a pair of Motogadget’s push button M-switch controls with their associated bar end turn signals. Topping them off are ABM radial cylinder and lever combos for the front brakes and clutch. But before the bars could be fitted there was one last task left to do. Keeping the CAN-bus happy necessitated a labor intensive full rewire of the bike, the result of which is all hidden under the tank, along with the ECU components and the new Linergy battery pack.

Of course, nothing says 21st century cool like a remote keyless start to bring your Matrix infused Neo-Racer to life. Like donning a pair of K1X’s best kicks for a game, it’s all about being able to stand back with the crowd and admire the artistry in full flight before strutting up for a legendary moment of your own. K1X has a motto for their brand that their ambassadors from Basketball, the Hip Hop world and all their customers are expected to follow. “Play hard — don’t embarrass our products.” In delivering this unbelievably cool, no-compromise custom BMW R nineT, Diamond Atelier have not only lived up to K1X’s expectations, they have also crafted a new machine with an evolutionary style that is set to resonate around the globe.