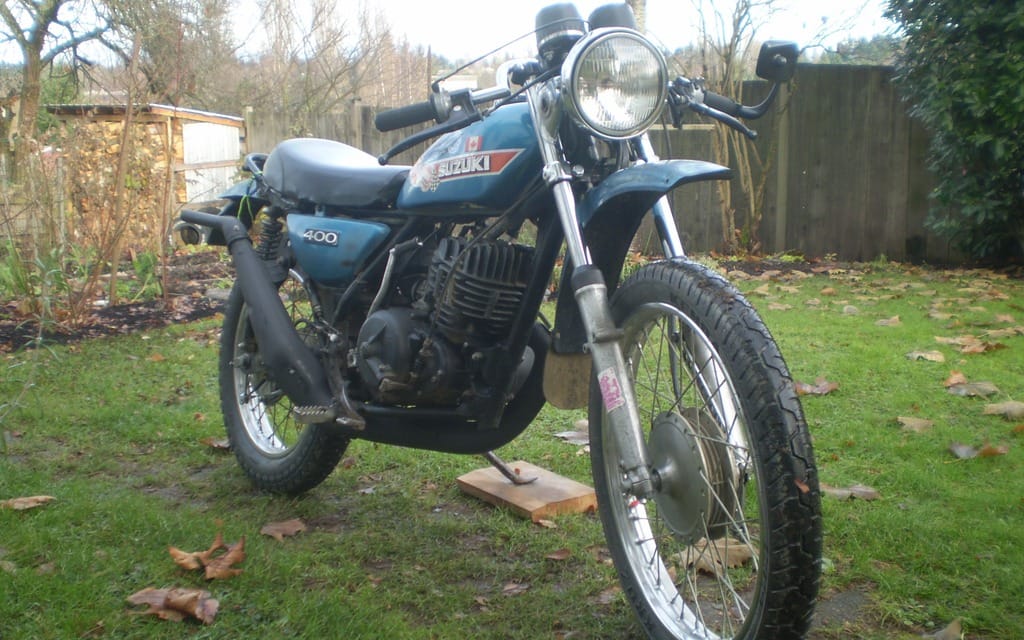 Recently I found renewed enthusiasm for my 1973 Suzuki TS400K Apache enduro bike. This made me realize truly what a bike for all seasons this machine has been for me. I bought the bike new in 1973 (or at least Mum and Dad did and I like to think I paid them back) much to the dismay of the Suzuki salesman who thought the bike was much too fast and powerful for a 16-year-old. Mum and Dad assured him that I could ride my Dad’s Montesa Scorpion with no trouble (a bike that when it ran, was as scary as its name implied). This was all at a time when Roger DeCoster was dominating world motocross races on the TM version of the Suzuki. A race bike you can ride to school! What 16-year-old dirt bike enthusiast wouldn’t want one of these? The Suzuki became my transportation, my off-road bike (the UBC Endowment Lands were our playground back then) and my mental health aid throughout high school and university. I even rode the bike in winter in the Cariboo country of B.C. where we holidayed over Christmas and the hard-packed snowmobile trails became my highways. I remember Mum often saying “Go for a ride” when I was getting a little grumpy around our house in Vancouver.

Years passed and my focus shifted and many bikes came and went but I always kept the Suzuki. I finished university and started working in the Yukon and the Suzuki sat at my parents’ place for many years. Upon being transferred to Nanaimo on Vancouver Island and my parents wanting to downsize on stuff, I collected the Suzuki with the thought that it would be fun to get back into trail riding, as there are many trails close to our house. The Suzuki was an obliging collaborator and easily started up and was ready to run with very little preparation. I still remember the first day I rode on the trails with a big smile on my face and wondered why I hadn’t done this years earlier. I felt like a kid again.

I rode a couple of recreational enduros on the old bike and started to realize how little range the thirsty two-stroke Suzuki had, how far off-road motorcycles had progressed and how slow I really was. Other newer enduro bikes caught my eye and again the Suzuki was put away in a friend’s workshop for several years.

My renewed interest in the Suzuki needs a bit of explanation. Last summer I rode my KTM Adventure to Wendover, Utah, to run it in the Run-Watcha-Brung class at Bonneville Speed Week. It was an unusual year in that you had to cross about a kilometre of six-to-eight-inch deep salt-slush water to reach the track. Not advised on a motorcycle but I had no choice having ridden to Bonneville and needing the bike to get to and from my campsite, etc., plus I had been wanting to do this for years. So after two days of crossings, first for scrutineering and second for my own orientation to the overall operations, I was ready for my runs. Until the salt-slush shorted my lithium battery, catching the KTM on fire at the campground. Even though I had rinsed the salt off each day at the local carwash, the slush had built up in the battery box, which on this model is located down low and in front of the engine. That was the end of my Bonneville speed runs. As they say, “The heartbreak of Bonneville.” Thanks to an outstanding countryman and another good friend of mine, my bike and I made it back home without incident and I have since repaired the KTM, which is no worse for the experience. But I caught the bug and want to go back. What approach to take next time?

Then it dawned on me: the old Suzuki! Not exactly the fastest bike in the world but it could be transformed into a Bonneville bike and hauled to Utah in my pickup truck. So I began the transformation from dirt bike to “production, classic” speed bike. The bike is a bit disadvantaged as it has to run in the 500 cc class but as a classic this engine size class does not seem hotly contested. However, this is far from the point for me. I want to set my own goals for speed on my bike and go back to Bonneville for the fun of it and spend time with all the like-minded people I met. Who knows, maybe in the future I will look at modifications, streamlining, etc., but I think that could be a slippery slope.

In the meantime I have thoroughly enjoyed renewing the old Suzuki with wheel bearings, steering head bearings, fork seals, street tires, a much-needed new carb, changes in gearing, and low Clubman bars. So far I have not had to touch the engine. Amazing how a set of Clubman bars can change the look and feel of a motorcycle. I think it looks pretty cool. The Suzuki is street legal in an anti-social, blue-smoke, crackly-exhaust-tone sort of way, but at least I can ride it to get it sorted out (problematic if you are running a 200 mph streamliner). So this old bike lives on after 41 years of hard use interspersed with long periods of sedentary existence, and it still brings a smile to my face. This is truly a bike for all seasons, if not decades. Did Mum and Dad somehow know that when we went to the neighbourhood Suzuki shop way back in 1973?