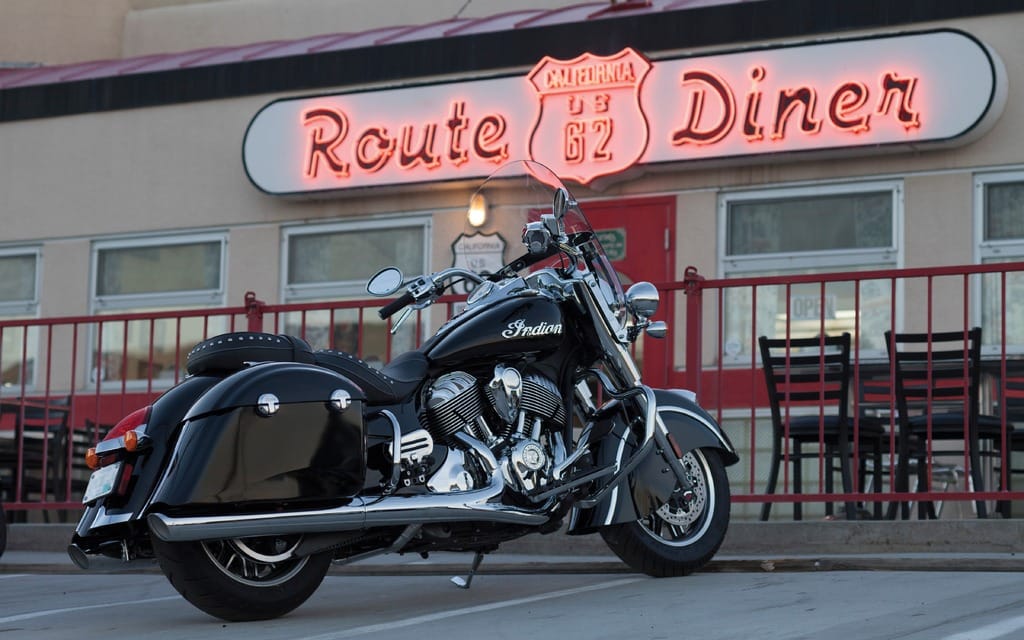 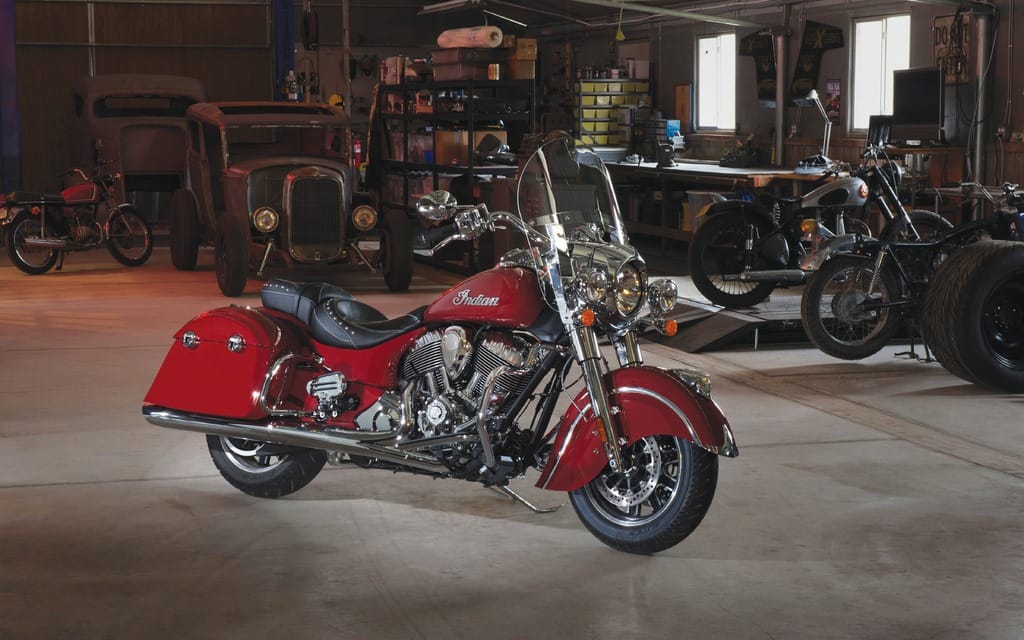 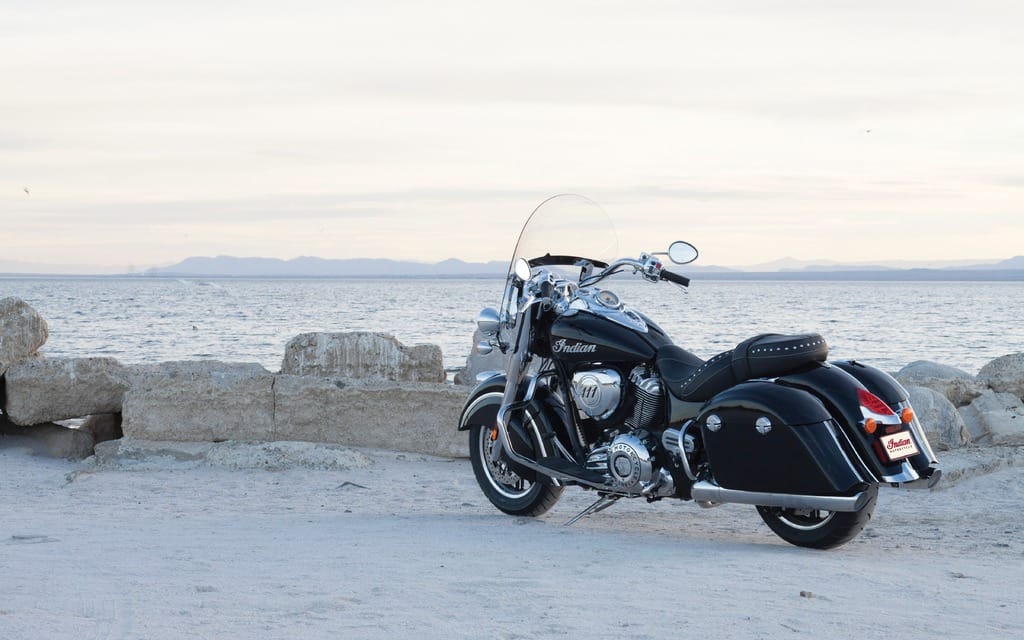 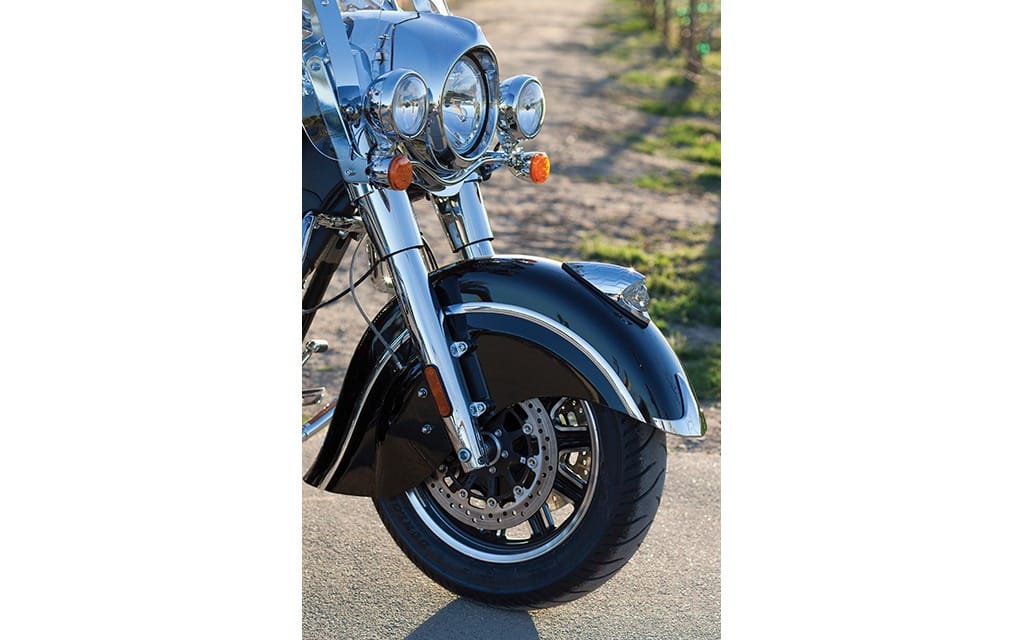 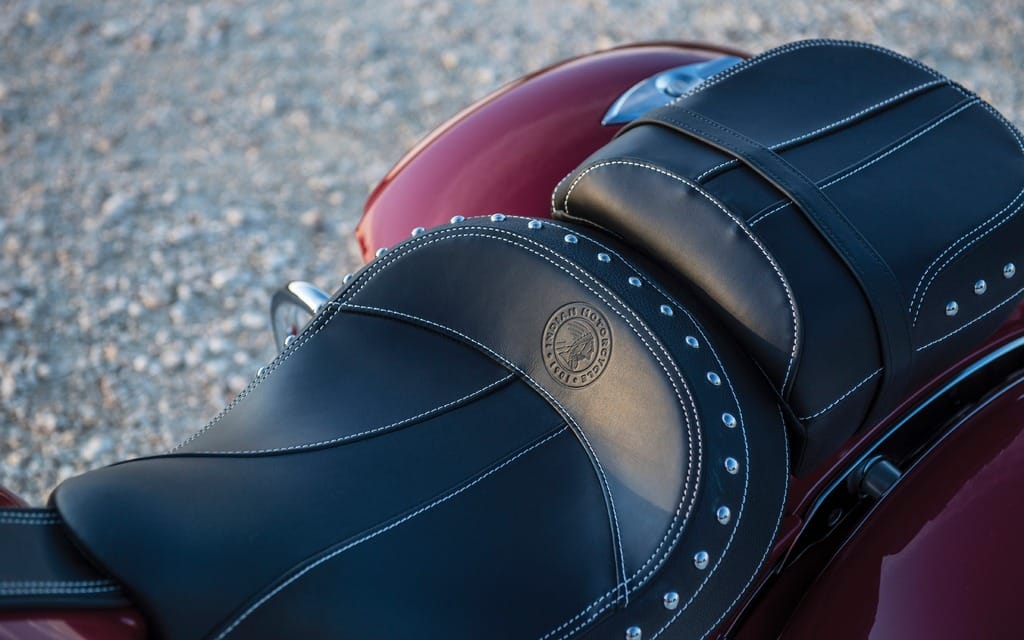 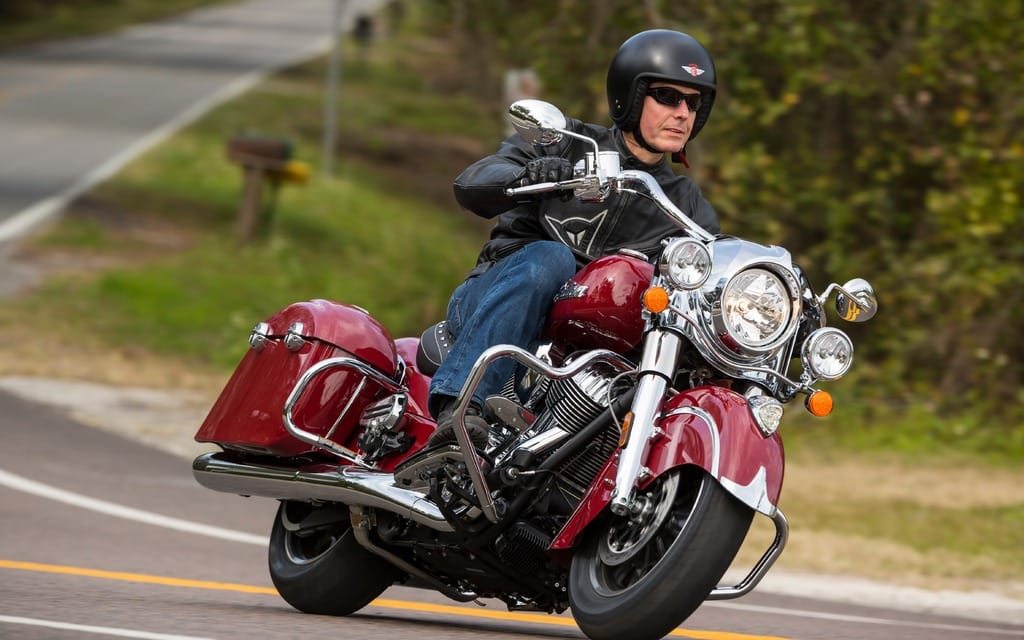 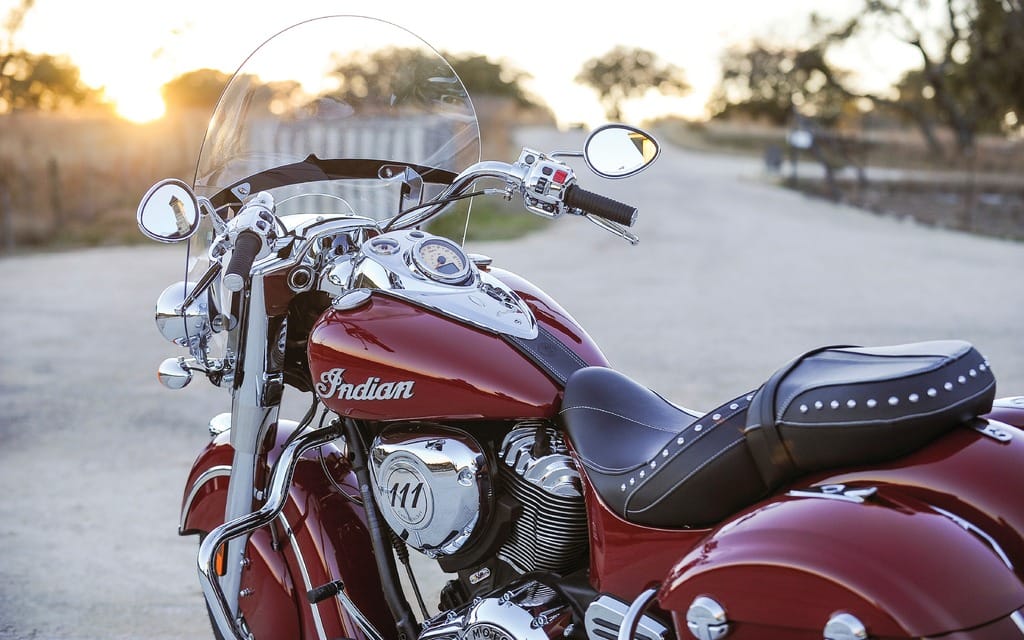 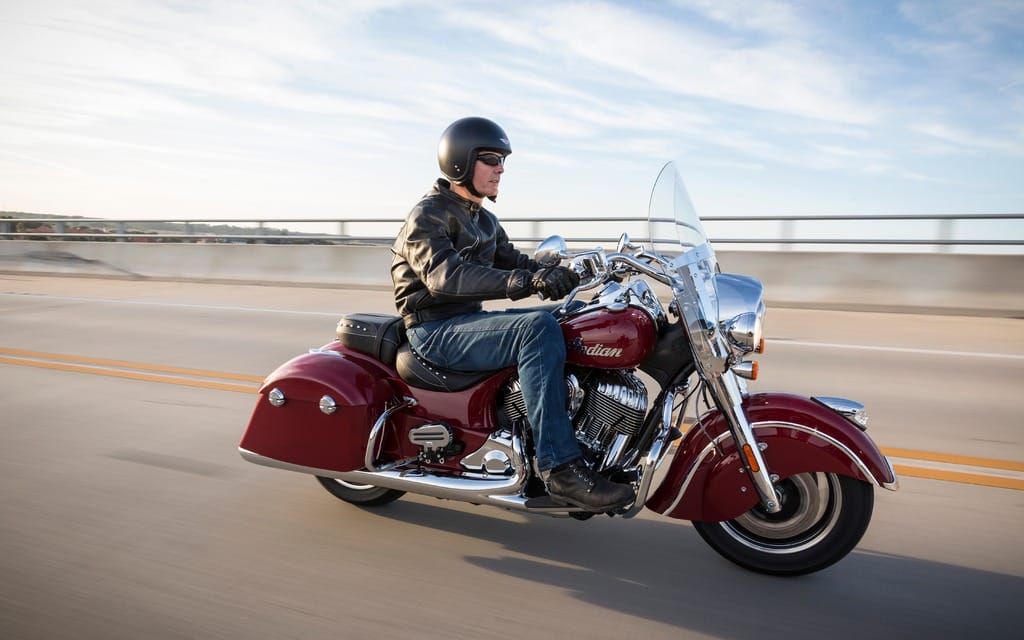 You pay for what you get, but Indian’s new Springfield is a lot of motorcycle
Indian has worked fast to create a family of large-capacity V-twins since the famous old marque’s rebirth under Polaris ownership three years ago. The initial Chief Classic cruiser was launched alongside the screen-and-saddlebags equipped Vintage and half-faired Chieftain, and has already been joined by the Roadmaster tourer and blacked-out Chief Dark Horse.

Now I’m riding through the old Florida city of St Augustine on the next of the family: the Springfield. The low sun is gleaming off its chromed headlamp nacelle; an air-cooled V-twin engine beats lazily below a broad red gas tank with Indian’s curly logo on its sides. Right now the Springfield is a simple naked cruiser — but earlier this morning it was a tourer: rumbling north from Daytona Beach with its windscreen keeping off the breeze, and my gear stashed in its pair of hard panniers.

The Springfield — named after the Massachusetts city where the old Indian firm’s famous “Wigwam” factory was located — is the sixth member of Indian’s family of air-cooled, 1811 cc V-twins, and could almost count as the seventh model too. It’s the most versatile of the bunch, because its screen and panniers can be removed in moments to create a naked cruiser very similar to the base-model Chief.

It’s not surprising that Indian has developed such a bike. The Road King has long been one of old rival Harley-Davidson’s most popular models, based on its combination of retro charm and the practicality of panniers and removable screen. Indian admits that since the Chief’s launch they’ve had numerous requests for such a machine, and that the reason the Springfield is appearing only now is that developing it wasn’t simply a case of bolting hard luggage to the Vintage.

That would potentially have concentrated too much weight at the rear of the bike, to the detriment of handling. Instead the Springfield’s chassis is tweaked to reduce rake from 29 to 25 degrees, moving the centre of gravity forward enough to allow fitment of Roadmaster-style panniers, which come as standard, and also an accessory top-box. Trail is also reduced, and the rear suspension is via the air-assisted shock from the big tourer, rather than the simple preload-adjustable unit used by the other models.

In most other respects the Springfield follows the Vintage, though it has a neatly stitched-and-studded black leather saddle instead of brown tassels, and its 16-inch wheels are cast and wearing black tires, rather than wire-spokers with white-walls. Its fat buck-horn bars are slightly more pulled back, which Indian says gives a more relaxed hand position, and its chromed parts include running lights as well as the Indian’s head on the traditionally gigantic front fender.

The Springfield felt much like a Vintage as I set off from Daytona, looking out over the tank-top expanse of chrome and the big perspex screen. Even before firing up the engine I’d benefitted from the keyless ignition — there’s a big starter button on the shiny tank-top console — and central locking, which controls the panniers via a smaller switch on the console, or the remote key-fob. The cases aren’t wide enough to take even an open-face helmet, but they’re reasonably roomy, and seemed robust and well-made.

In many ways the star of the Springfield show is the heavily-finned, pushrod-operated 1811 cc V-twin engine, shared with all the other Chief models. It’s a superbly torquey powerplant, grunting out its claimed 139 N.m (102.5 lb-ft) torque maximum at just 2600 rpm. The Indian pulled from 1500 rpm or so with effortless grace, and a pleasant throbbing feel that could hardly be described as vibration, even when the revs rose and the bike thundered forward at a respectably rapid rate.

On the freeway the Springfield sat with about 130 km/h showing on its stylish tank-mounted analogue speedo, holding its pace via the standard-fit cruise control, the big engine loping long-leggedly at just 3000 rpm, and the screen doing an excellent job of adding to the luxurious feel. The screen is not adjustable and, being tall, I was pleasantly surprised to be able to look over it while receiving excellent wind protection and suffering hardly any turbulence. Average-height riders will look through it, which might not be ideal, though none of our group seemed to complain. Shorter and taller alternative screens are available.

Handling was also impressive, especially the steering which, thanks to the steeper geometry, was subtly lighter than that of the Chief Vintage that we also got to ride. At 364 kg dry the Springfield is a pretty hefty machine but was pleasantly manageable, helped by its fairly low seat. Indian’s aluminum frame is impressively stiff, and the combination of stout 46 mm forks and air-assisted monoshock did a good job of maintaining stability and control while delivering a very supple ride.

The Springfield is essentially a big American tourer designed mainly for straight lines, but when we found a few bends it tracked round in reasonably enthusiastic fashion, and even had enough ground clearance to be fun. Like the other Chief models it had plenty of braking power, too, thanks to four-piston front calipers and a trio of 300 mm discs, ably supported by a competent ABS system and reasonably grippy Dunlop Elite tires.

When we reached our base at St Augustine I could simply have removed the screen in a few seconds to leave a more manoeuvrable V-twin, rather than choosing the even more simple alternative of swapping bikes with another journalist who’d ridden there in less comfort aboard a screenless Springfield. Removing the panniers is almost as quick (a wire under the left sidepanel has to be unplugged), though most riders are likely to leave them in place, not least because they have no carrying handles and don’t add to the bike’s width.

Most owners are likely to keep the Springfield’s screen in the garage most of the time, fitting it only for the longer trips for which the bike seems very well suited. Its dual-seat is large, generously padded and very supportive; its list of attractions includes adjustable pillion footboards, front and rear crash-bars, plus some sophisticated electronics including tire pressure warning which, like the keyless ignition and remote locking, seems almost out of place on such a traditionally styled bike.

Inevitably these features and the sumptuous finish quality don’t come cheap. The Springfield costs several thousand dollars more than the rival Road King in the Canadian market, and its $26,299 sticker makes it $1,300 more expensive than Indian’s own Chief Vintage. Then again, the Springfield’s versatility means it’s almost two bikes in one. And whether in cool urban cruiser or laid-back American tourer form, it’s a wonderfully stylish, charismatic and enjoyable machine.