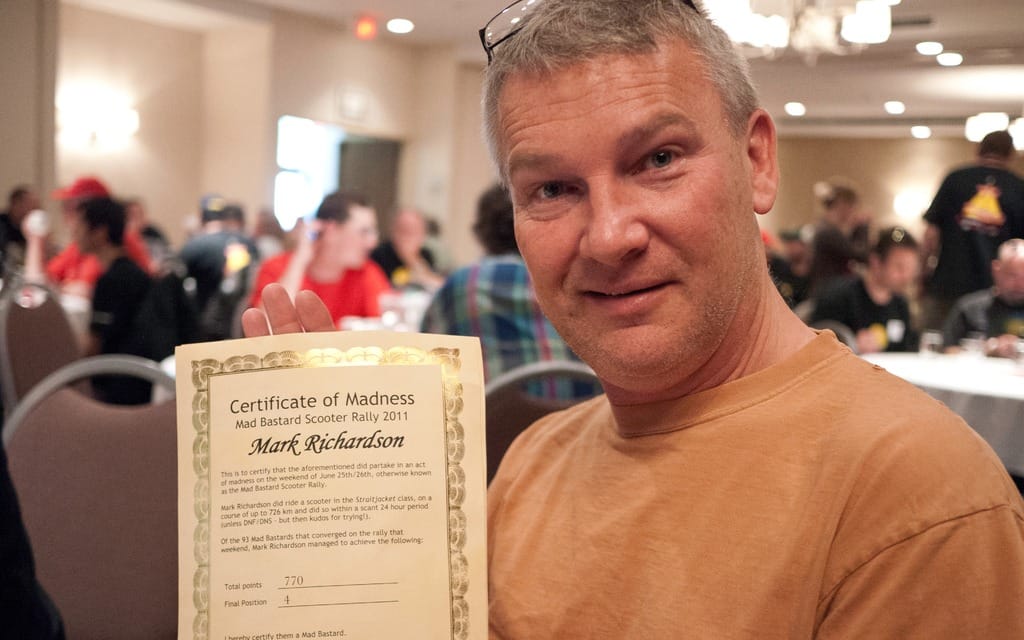 If Rob Harris had been asked before his death to designate a successor, he would almost certainly have named Mark Richardson to run Canada Moto Guide, which is the former CMG Online.

Mark is well-known to Canadian motojournalists and to many readers. He was the Toronto Star’s “Wheels” editor for years and recently has begun contributing to the Globe & Mail. We can’t think of a better person to keep up the tradition of fine and entertaining journalism that the late and highly esteemed Rob Harris established in his website magazine.

Richardson is an amiable and knowledgeable motorcycle journalist who seems always willing to take on the most challenging roles, and who exudes a kind of crazy charm wherever he goes. CC staff writer Steve Thornton rode with him (and Costa Mozouris, a former CC editor) in the 2011 Mad Bastard Rally, a whacky creation of Harris’s that tested the determination, inventiveness, and resilience of riders in all-night scooter rides with a scavenger hunt thrown in just for the hell of it. It was a draining but exhilarating experience, made better by Richardson’s cheery good nature. He’s also a hell of a rider and a terrific writer. And he seems to have no shame when posing for a rally-winning photo of himself on a Mad Bastard scooter.

We’re pleased that Mark will take the editor’s chair at CMG. The loss of Rob Harris has been devastating for his family, of course, but also for the many journalists and motorcycle industry people who knew and loved him—he was a prince. But we’re confident that Mark won’t let down his readers, and not that it matters, but we think it’s nice that CMG will continue to be spoken with a British accent. Good on ya, mate! Or is that somewhere else?