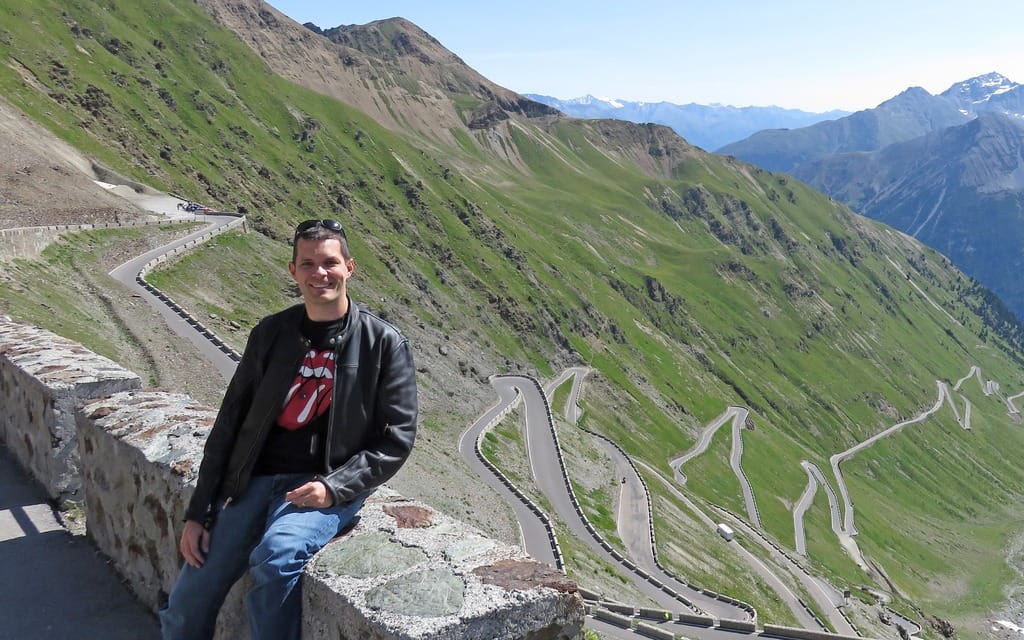 A few years ago I sold my motorcycle. Since then I’ve had to scratch the two-wheel itch with motorcycle shows and the occasional rental. I had seen a picture of the Stelvio Pass in Northern Italy and knew that one day I was going to have to make it happen.

I am often in Europe for work and had been planning this trip for a little over a year. Stelvio was a must; however, I wanted to plan an interesting route with lots of twisties back and forth and not much backtracking.That route would begin at a rental shop in Milan and had to end there 24 hours later to keep the costs reasonable and get me back to work on time. Leaving Milan in the afternoon I headed north for Lecco on the southeast corner of Lake Como. The first bit is all flat through industrial areas before the scenery and elevation changes for the better. Continuing north, I followed the banks of the lake before turning east toward Tirano on the Italian-Swiss border. If you were going directly to Stelvio, you would continue east through Bormio and up to the pass. However, I was overnighting and before my date with Miss Italy I wanted to make a loop with a few curves to close out the day. Turning north into Switzerland for the Bernina Pass fit the bill. At the pass I turned right back into Italy to find my hotel in Livigno. It was easy to find, there was a motorcycle on a rock out front. In the lobby, which doubled as a restaurant, the check-in clerk told me I could park the bike in the garage overnight. She also told me they had cold beer on tap and to hurry as the restaurant closed in 45 minutes.

Stirred awake by cowbells out my hotel window, followed by a couple of cappuccinos and a croissant, I was off. I thumbed my rental R1200RT to life and set the seat and hand grip heat to max. Ambient air was just 1.5° C but no match for the creature comforts of my BMW. It was mid-July and Milan’s mercury was tickling 35° C in the daytime. In Livigno, a mere three hours north, it was barely above zero in the morning. Knowing this made the choice of bikes easy in the planning stage. The shop I rented from had a laundry list of cool and exotic motorcycles to choose from, the latest from BMW, Ducati, Harley and Moto Guzzi. Feeling a little nostalgic and seeing as I would be riding past the factory I originally asked for a Moto Guzzi California. I guess I wasn’t the only one with the same sense of nostalgia as they were all rented. A Ducati Diavel also appealed to my inner rebel but the R1200RT won out as it had the fancy seat heat that was now keeping my tail-end toasty as I crossed the border again to attack Stelvio from the Swiss side via the Umbrail Pass.

The Stelvio Pass, or more officially Italian State Highway 38, runs from Bormio to Merano. It’s all Italy now but previously at the top of the pass you crossed into Austria. From Umbrail you meet SS38 just to the west of the summit, splitting it in two. The peak is called Dreisprachenspitze or Peak of Three Languages; Italian to the west, German to the east and Romansch to the north in Switzerland. It’s all on the t-shirt I got suckered into at one of the kitschy shops at the top of the pass. What makes it fantastic is 60 hairpin turns as you make your way up and down the 9,000+foot peak.

You’re officially in the middle of nowhere but you’d never know it with the rows and rows of bikes (motorized and otherwise), souvenir shops and street meat vendors. Outstandingly, you can get a good cappuccino here. This is Italy, after all. With a couple hero pics and my new t-shirt stuffed away, it was time to make my way back to Milan.

I did take note of the web address of the fellow taking pictures in one of the hairpins on the north side of the pass. As you round one of the corners, a guy with a fancy camera and a website sprawled across his car was snapping pics of everyone going by. For €8 you can get an action shot of you on your steel horse going around a corner. I wasn’t sure if he got my best side.

From there the trusty Beemer took me over the Gavia, Mortirolo and Aprica passes before heading south to Bergamo to pick up the main highway back to the rental shop. In hindsight, I would have to say the Gavia pass was the most fun to ride. All were scenic and would put any Southern Ontario road to shame. Gavia, however, had the largest variety of road qualities: switchbacks, varying radius turns and the ability to pick up the speed a bit in a few spots. Most importantly, it had the least traffic.

A couple of things to be aware of if you want to try Stelvio yourself. Trucks and buses need to do three-point turns (sometimes more) going around hairpins. In many places the road isn’t wide enough for two cars to pass. There are lots of bicycles as people are in the area practicing for the various European bike races. Keep a good look out for other motorcycles—there’re lots of them. That said, a motorcycle trip in this part of the world is probably the most fun I’ve ever had with my leathers on.

After dropping off the bike I found an outdoor café and started planning my next ride. Paso Los Libertadores in Chile looks interesting. Another cappuccino, yes please!