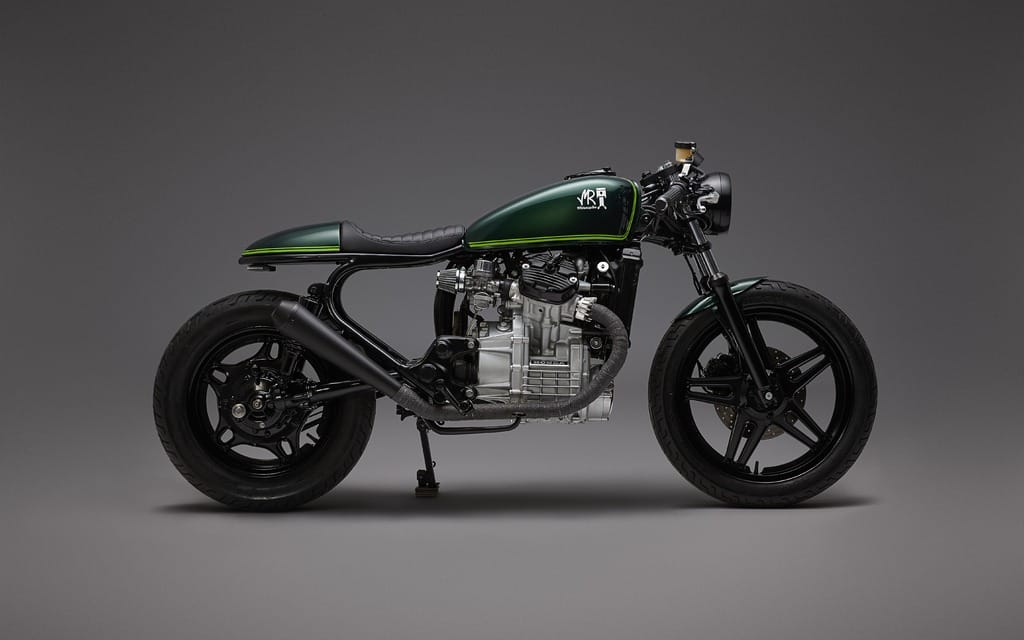 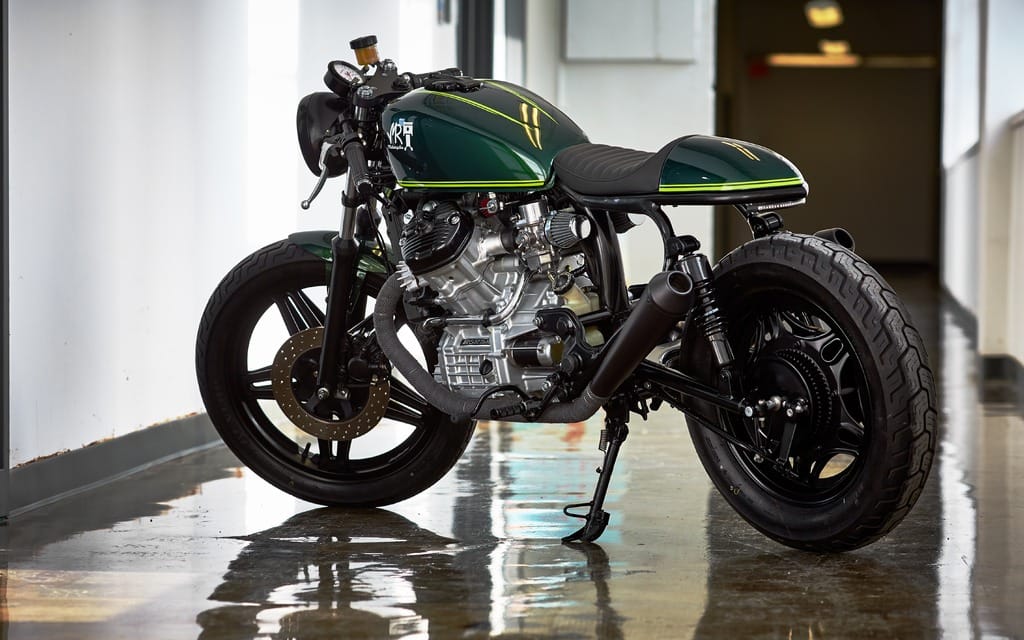 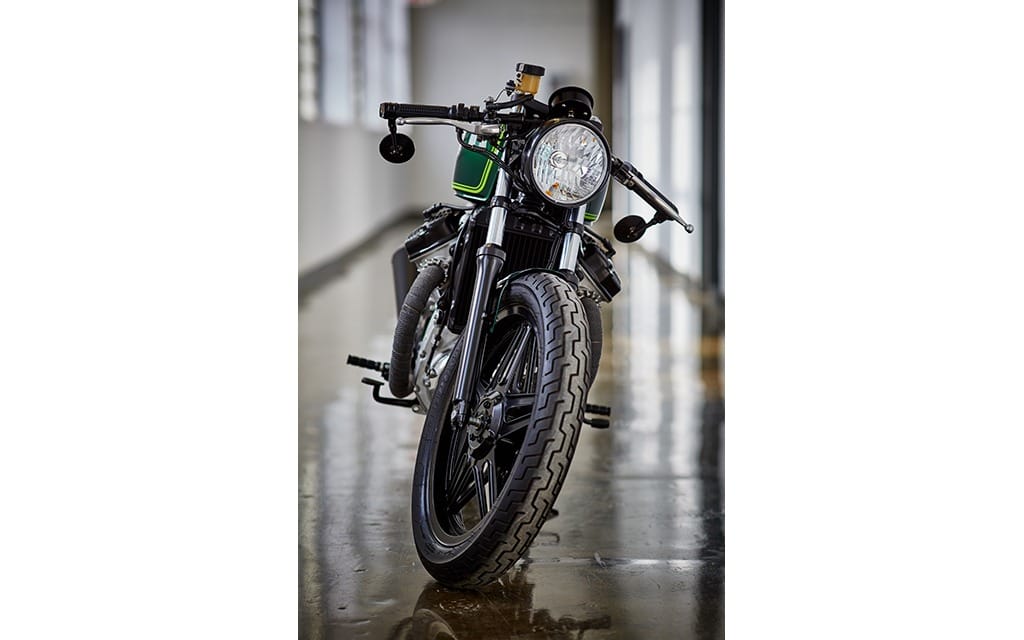 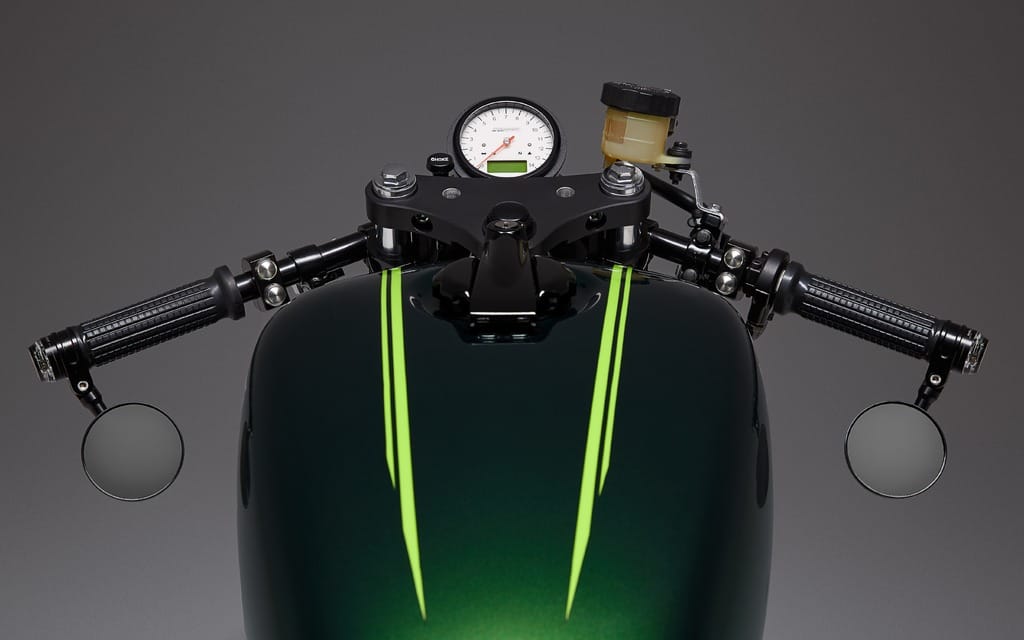 They called it ‘The Plastic Maggot’ when it was first released. But nobody’s sneering at the Honda CX now
By Martin Hodgson, Pipeburn.com

For nearly 30 years, the Honda CX500 cruised the highways and byways of the world as the poor man’s cruiser — a bike for those who couldn’t shell out the bucks for a Harley-Davidson but still wanted the bars-up style and the V-twin heartbeat. Then in the last 10 years, some clever custom folks from around the world took the oddball Honda — so ugly it was known as the “Plastic Maggot” — and started turning them into a stunning line-up of new designs that just keep getting better. Enter Mathieu Renaud of Mr Motorcycles in Montreal, who picked up this 1979 Honda CX500 Custom for the bargain price of just $1000 and put his years of experience in aeronautics into creating one of the cleanest CX customs we’ve ever seen.

Mat is not the first aeronautical engineer to be involved in a CX500 build ; in fact the designer of the CX500 was Shoichiro Irimajiri, an aeronautics master who spent more than 20 years at Honda designing F1 engines, the legendary CBX 6, and of course Plastic Maggot. He was given a blank canvas for the CX project and rather than stick with the inline four that was becoming the dominant engine of the period he bucked the trend creating a water-cooled, shaft-driven, V-twin mounted like a Moto Guzzi. At the time Honda had never produced a V-twin and had only once used a shaft drive. To keep things interesting Irimajiri opted for pushrods over overhead cams and rotated the heads 22 degrees so the carbs would be in the centre of the bike.

One of the reasons Mat started Mr Motorcycle was to find a way to best spend his time during the long winters in Quebec. Judging by the quality of his work it is time well spent but a CX for a thousand bucks needs a lot of work no matter how you look at it. It all started with a full tear-down and examination of the parts. Anything that didn’t pass the test was tossed aside and only the good bits remain, largely the frame, tank and wheels. Mat cleaned up the frame and started working on a way to make clean lines out of the pressed steel rear end. A lot of people simply cut it off at the shock mounts and then weld in a rear hoop but Mat was having none of it and cut the frame right back to the downtube. From here the new metal work is all tubular with a new rear subframe beautifully integrated into the main frame and the shock mounts moved to the lower supports.

With the frame, shaft drive and many smaller components sent off for powder-coating, Mat had time to think about the metal work. The Custom model of the CX is often overlooked by modifiers due to its ape-hanger bars and gaudy seat but it comes with a distinct advantage — a fuel tank considerably narrower than the behemoth on the stock model. The tank has been cleaned up and the latched fuel cap restored to original condition. With the frame back on his bench, Mat fabricated a tail piece that matched the long and low lines of the tank. The dark green paint work was laid down and neon lime pinstripping highlights the quality of the metalwork.

Getting the lines right on a CX500 is crucial to the look and the consensus from the top builders has been to keep the back bone near parallel to the ground with about two to five degrees of downward angle at the rear. To get that look Mat shortened the front forks 1 1/2 inches and the retention of the heavily bobbed tire-hugging fender aids in front end rigidity. The standard steering stem and bottom yoke have been retained but clamping the lowered forks up top is one of Cognito Moto’s billet aluminium triple trees. With the change to the rear subframe of the bike Mat needed far shorter rear shocks to get the stance right and blacked out adjustable items do the job perfectly. The single front disc has been retained, although drilled for increased cooling and to help apply some extra pressure a master cylinder from a Honda CBR600RR provides a far better feel at the lever.

That modern Honda braking componentry sits on the new clip-ons next to a smorgasbord of the best components from Motogadget. It’s all controlled by an impressive m-Unit that is the heart of the system and hidden away out of sight. The tiny m-Button keeps the bars ultra clean while there is no need for a key thanks to the wireless ignition courtesy of the m-Lock. A pair of m-Switch housings control the bar end LED indicators also from Motogadget. While the housing on the other side of the bars switches the new Cafe Racer look headlight between high and low beam. There is an LED-strip tail light/indicator combo and neat bar end mirrors and a Motogadget Motoscope Classic Tachometer that also features a small digital display. He even went to the trouble of neatly remounting the choke so that it’s both in a functional location and becomes another neat touch.

The defining feature of any CX500 build remains the unique design of the engine by Irimajiri-san, you just can’t fight it. The 497 cc, OHV, 80° V-twin, with four valves per cylinder, remains relatively stock internally but has been treated to hours of polishing and powder coat to get it looking its best. The heavy stock collector box has been thrown away and now individually wrapped pipes run rearward where they vent to atmosphere courtesy of twin black reverse cone mufflers. But it’s the stock carbs that stand out, cleaned and polished to within a millimetre of their stoichiometric lives, fitted with pod filters, and tuned with the aid of a dynamometer.

The Comstar wheels that were used on a number of Honda models of the era look best in black and the lightweight wheels that are functionally superior to many that replace them wear quality Dunlop rubber. Which is really what sums up everything he has done in turning out one of the cleanest, most thoughtfully put together, CX500 Cafe Racers you are ever likely to see. From the brilliant body work and paint, to the frame modifications that allow for that glorious engine displaying negative space and the detail to which every single item is presented at its best shows that the only thing better when it comes to a CX build is not one man qualified to build a spaceship, but two; and as the ice melts Montreal is about to witness this incredible Honda take flight.