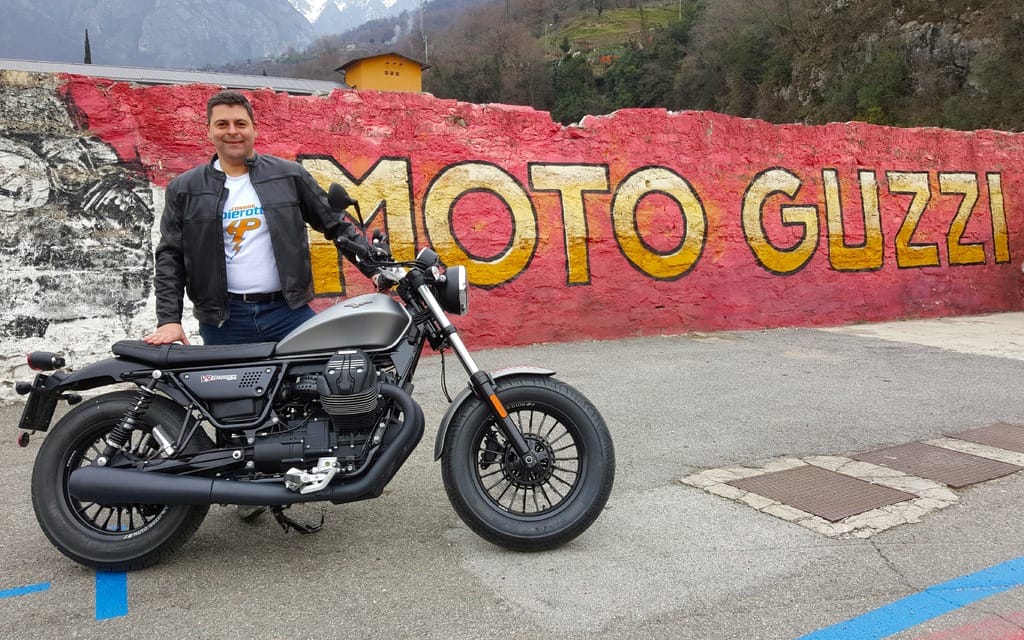 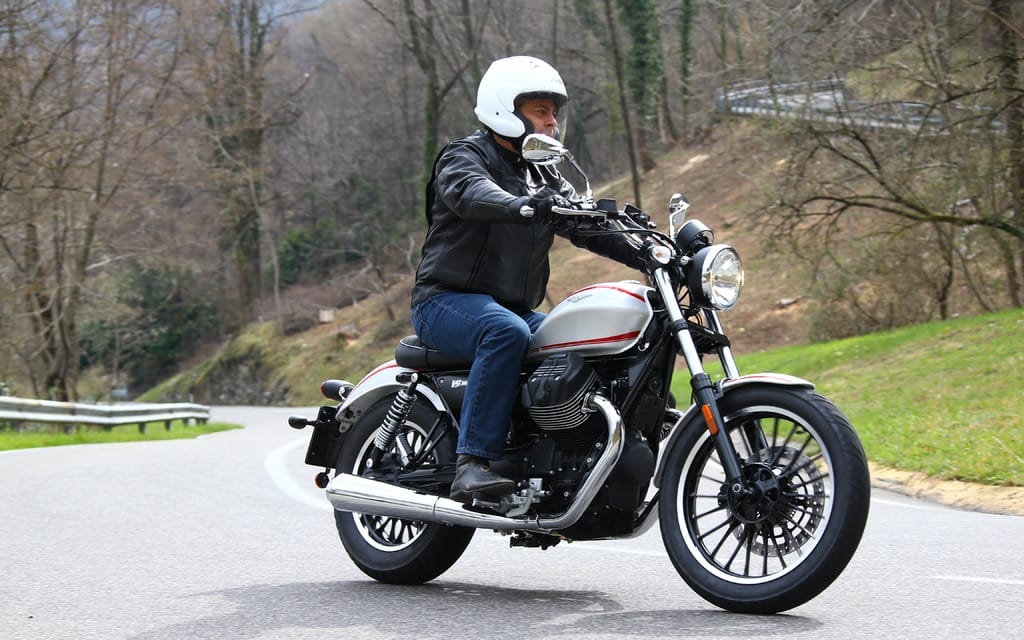 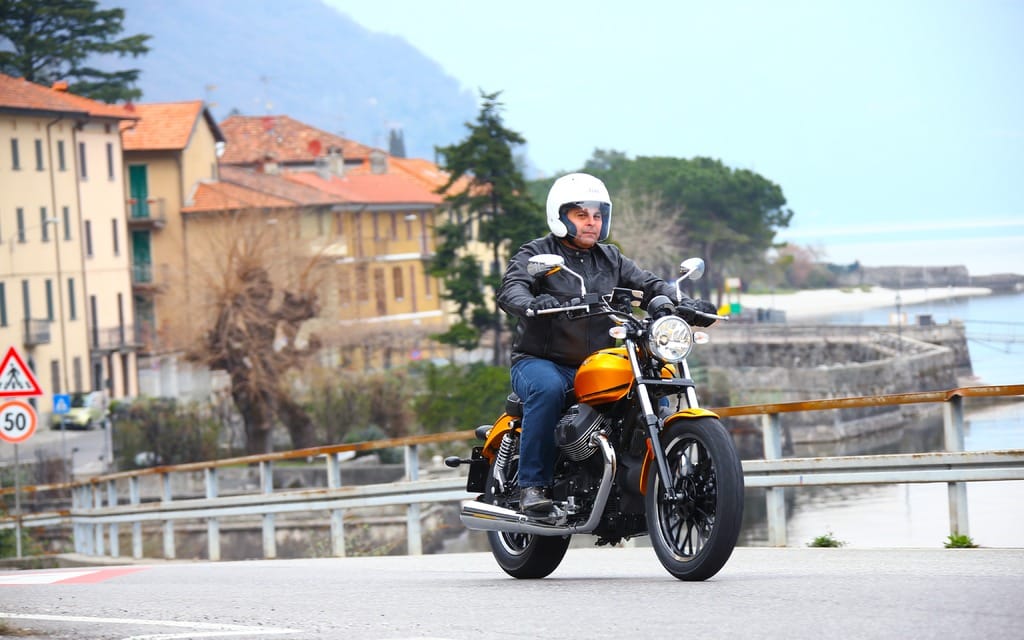 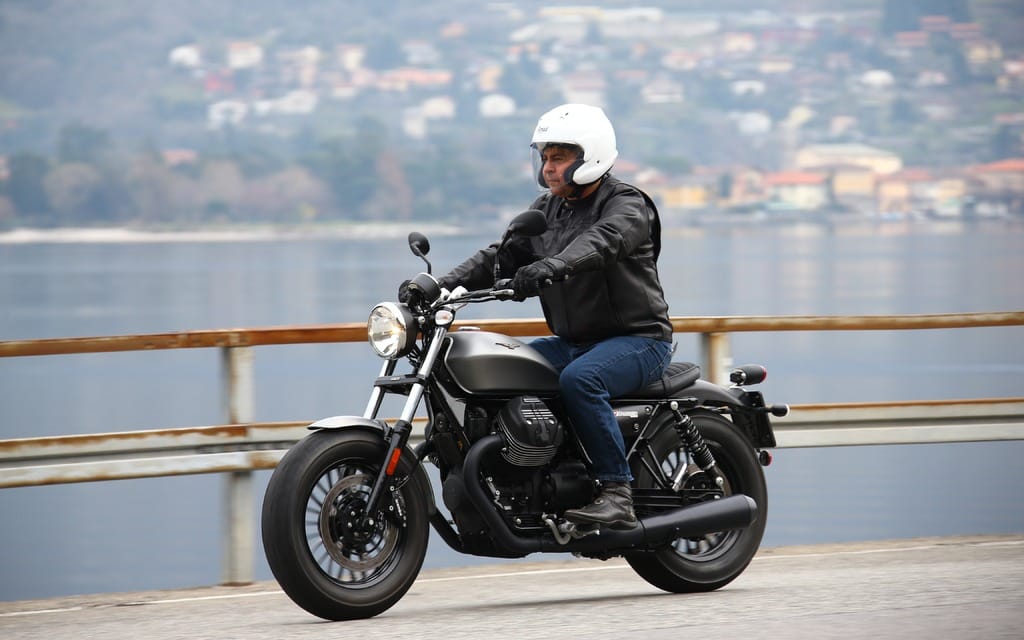 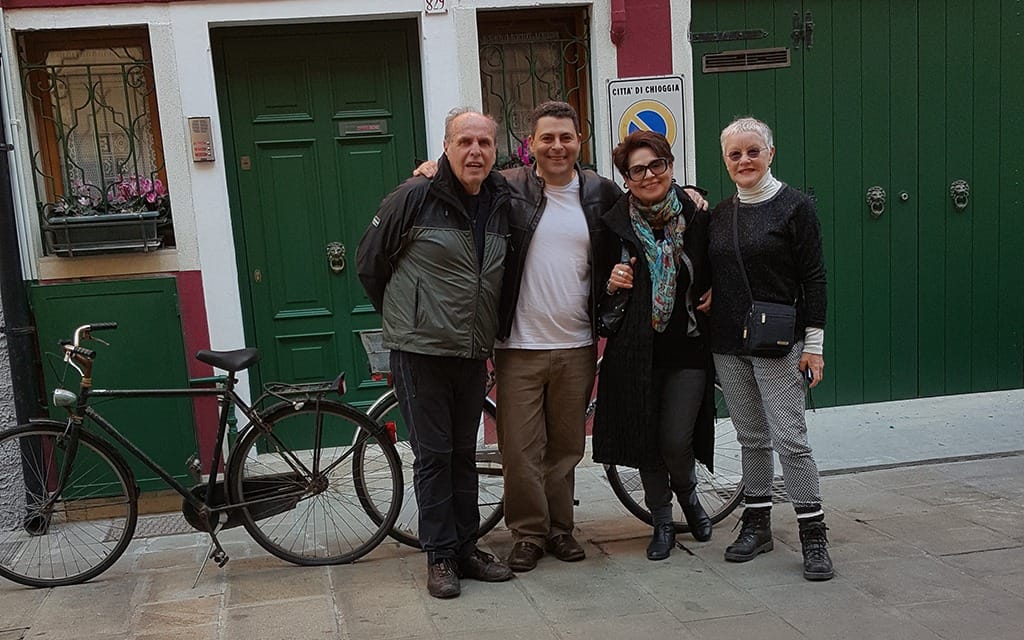 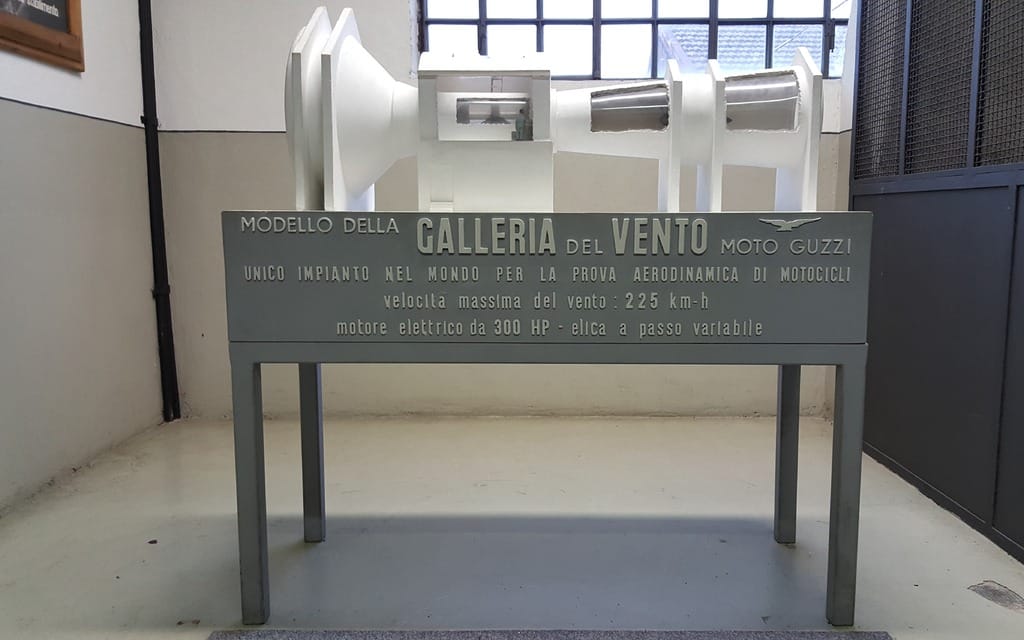 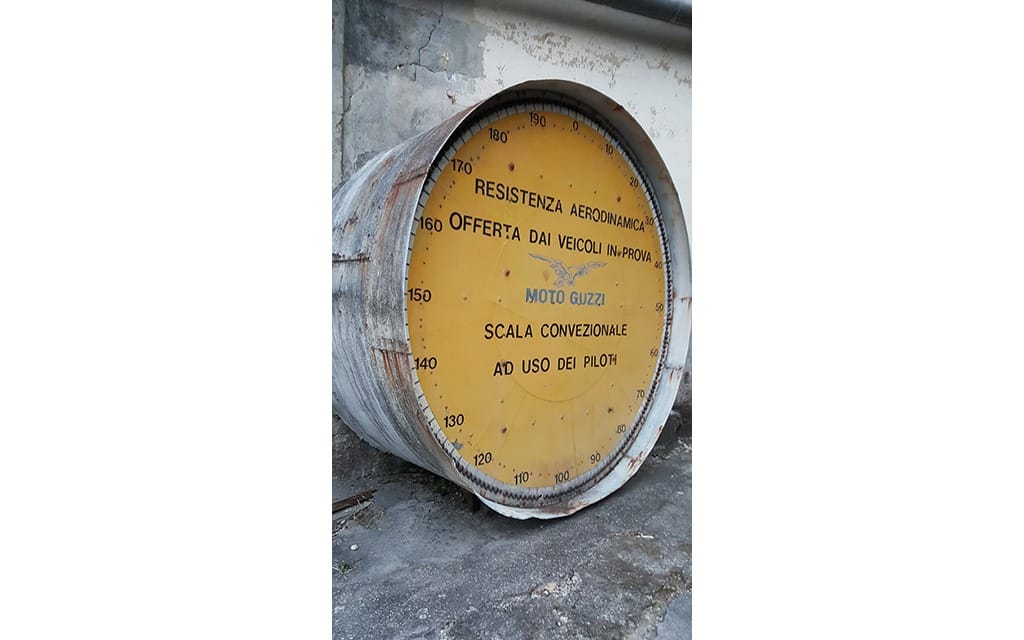 Where an Italian marque was born, memories stir bitter and sweet
My hometown, Chioggia, is located in the Italian province of Venice, about two and half hours away from Moto Guzzi’s head office in Mandello del Lario, near Milan. I used to go there every summer from age three to 16 while Mom and Dad ran the family business in Canada, so it was a no-brainer to go a few days early for the launch of the all-new V9. And Guzzi’s head office is on a glacial lake in the Alps connected to where my pseudo-brother Sandro now lives in Lugano, Switzerland, so friends brought me there too.

Waiting for lost luggage while my cousin Rosella and family are on the other side of security to pick me up, I strike up a conversation in Italian with a retired gentleman who remembers fondly “la vechia”—or “the old” Moto Guzzi. As one of the first motorcycle brands in Italy and the oldest European manufacturer with continuous production, it has a fair share of history and a cult-like following. Rosella’s husband also later tells me it provided the military with motorcycles during wartimes of years past.

Walking along the old coblestoned “portici”, or arch-covered walkways, in Chioggia, I find Piero Zambotti’s dad Ivano waiting for me.

Piero was my closest friend before he died in 2003 on a Cycle Canada fall tour; his parents have become family for me, and my own children call them Grammy and Nonno. They had planned to spend a weekend with my mother in Chioggia, since they all happened to be situated within an hour of each other. But nobody could predict that I’d also end up just a couple hours away—so my first overseas press launch in years became a serendipitous sort of mini re-union.

Hugs, a walk into the cafe, a hug from Piero’s mom Carol, and out comes a Moto Guzzi story from years past when they lived in Italy full-time. Ivano had purchased a little orange 50 cc model for Carol to scoot around on, along with two helmets, one yellow for her and the other blue for Piero who was then three years old. The scooter itself was described as having met an unfortunate end after they left Italy and a younger family member painted it black, but this begins to set the framework in better learning that Moto Guzzi is an Italian brand with deep roots, particularly with the elders. Guzzi has recently begun going after younger as well as female riders, but I do not know that yet.

It seems everyone I speak with has a Moto Guzzi story. The company itself was founded on March 15, 1921, exactly 95 years prior to the day I was at the factory and rode the V9. It was founded by three men who met in World War I, one with a mechanical background, and the other two as pilots, one of which happened to also be an established motorcycle racer. Aviation technology is clearly visible in the early models, and helped make them successful in European racing championships of the era.

The prototype used to present the bank with their concept and obtain financing is on display in the on-site museum, together with countless motorcycles showing their innovative spirit and evolution. Even the first prototype 90-degree v-twin with longitudinal crankshaft orientation and cases split in easier-to-test-and-tweak manner is there. The museum has everything from their early race bikes with what seem to be prehistoric disc brakes and eight cylinder small bore engines to scooters, cruisers and more. It is clear that the V9 has remained strikingly true to its heritage, not only in style, but also with its “new” 850 cc 90-degree parallel v-twin engine.

According to our tour guide, a now retired third generation Moto Guzzi employee, the company employed over 1,600 people at its peak, and produced over 30,000 units of various types per year—not just motorcycles. Company staff was provided homes on the mountain overlooking the factory, directly above the wind tunnel below. The company even built bomb shelters into the side of the mountain beneath the homes during the Second World War when producing equipment for the military, since they were a target for Allied bombers.

Moto Guzzi created and still has the world’s first wind tunnel designed specifically to improve motorcycle aerodynamics. It is powered by a 300 horsepower variable speed electrical motor which could only be used after five p.m. when the factory no longer needed the power. A big concrete cylindrical shape lined with lights and numbers beneath like a traditional tachometer tells the test rider how fast the wind is blowing during the simulation.

When things wound down and most of the component manufacturing was outsourced, the homes were sold and the main electrical infrastructure to support heavy equipment that was no longer needed was removed. No power and new neighbors means the obnoxiously loud propeller mounted turbine is no longer in use—so while the wind tunnel is still functional, it’s not operational.

Absolutely every component of the motorcycles was once produced at the facility from design through to final assembly. The village of Mandello del Lario was largely employed by the factory, and had artisans of various disciplines that passed on their trade in manner similar to what happened to our guide, who was himself trained by a retiree that was called in specifically to teach him how to build and weld frames.

I am told the company now uses only about 35 percent of the original facility, and has plans on how the balance will be used in upcoming years. While assembly of all components still happens at the factory, to improve economies of scale, external partners that are often shared with Guzzi’s parent company, the Piaggio Group, produce and deliver most of the parts used. (Piaggio is Europe’s largest motorcycle manufacturer.)

The V9 motorcycle is designed using Italian mid-sized cruiser category ideals. But don’t get that confused with how North America defines the cruiser category. The Guzzi is almost effortless to lift vertical, stationary steering is easy, and the seating position is similar to when sitting at your desk or dinner table—upright, arms comfortable, and knees bent at 90 degrees. It is a utilitarian model aimed squarely at the cool, new, or female riders. I later learn it is also very stable at speeds most of these riders are not likely to travel.

Made almost exclusively of steel and aluminum, the V9 comes in two Guzzi personalities, the Bobber and the Roamer. Whether they look old or the new cool is up to you to decide. While boasting that they are not made of plastic, we are told that 90% of the parts used are new, although I can’t tell at a glance.

The Roamer has a higher seat and wider bars for a more relaxed seating position, and is more traditional with extensive use of chrome and pinstripes. The Bobber is way cooler in my view, with flat paint, bolder accents, smaller diameter fat front tire, thinner seat, lower bars and marginally more active seating position. Both have 45 percent of their weight on the front wheel, so the V9 feels planted but stable.

Turn on the engine, and it sways to the right with every rev. The sensation becomes imperceptible once in motion and the lightly mechanical sound is muffled well through the stock exhaust. But the Bobber on display is decked out with some of the over 400 OEM accessories available through Moto Guzzi, the most interesting of which to me is the heat wrapped, flat black and meaner looking straight-pipe exhaust. All accessories are tested for fit at the factory, but plan to enjoy your V9 in stock configuration for a while if you buy one—accessories often take time to homologate and arrive at North American dealerships.

Most of this historically reliable air-cooled engine’s heat is lower down in the crankcase, and the cylinders protrude a bit to provide comfortable warmth in brisk weather. With over 44 claimed foot-pounds of torque from 2,500 to 6,500 RPM, power delivery is both strong and linear. But there is no mention of power-to-weight ratio or horsepower, since that is not important here. Moto Guzzis are known to be reliable and easy to ride, so the brand tried to remain true to its roots in its evolution.

For a retro model, the V9 has a lot of gadgets. Don’t ask how I know, but turn off the two traction control settings, and it wheelies easily under power. It has Magneti Marelli electronics, ABS at both ends, Brembo calipers up front, and an optional USB key with multimedia interface for an iPhone to augment what is shown on the stock display.

Not only has the combustion chamber been changed, but first and sixth gears are taller to suit a wider range of speeds down low and up high in the gearbox. The gearbox is smooth clicking through it, and ratios overlap quite a bit, particularly down low where I spend much of the day. First gear works well up to about 40 km/h, second from 20 to 60, third from 40 to . . . you get the picture. It doesn’t much care what gear I am in, although throttle response can be abrupt between on and off positions if chugging the engine too much. Seating position is low, clutch modulation is easy, and steering is nimble at a slow to medium pace.

Riding along the side of the mountain, I keep momentarily thinking how beautiful the Rockies are. Except these are the Alps, and rather than natural beauty with bears, old rustic towns and people are everywhere. This is one of the largest glacial lakes in northern Italy, Lake Como, not Lake Louise in Banff National Park. Here there are also 180-degree hairpin turns carved up along the side of mountains which become framed with snow along the curb as I go up in altitude.

This is where Guzzi does its testing, so it is clear why the V9 steers well and has good torque. To me, the Bobber feels better to ride than the Roamer, but I’m not sure if that is because I think looks cooler. Motorcycles are funny that way. Choosing is often more about emotion than logic once the basics are met and it is not about lap times. The V9 Roamer comes in white and yellow for $11,090 while the V9 Bobber comes in flat black and grey for an extra $500 if price matters.

One final regression of serendipitous reunions—Peter Jones mentions during the farewell dinner that he has been to a Canadian racetrack. It turns out that he was Team Pearl Suzuki’s team owner back in 1995 and that one of his star riders was also my teammate while racing with Suzuki Canada, the late Frank Wilson whom he described as a sweetheart—then came the goose bumps again.

The wings on the Moto Guzzi logo are in memory of one of its original founders, Giorgio Parodi, who died shortly after the war. Grammy and Nonno also have a commemorative sculpture of a wing for their son Piero, but that one sits in their yard. I wish he could have been there.

Moto Guzzi sales have grown by eight percent between 2011 and 2015, and Guzzi has eyes set on Harley-Davidson owners looking for a change. Their 95th anniversary being on the exact day of our test was missed by Anglophones until I brought it up, and it seems to have almost intentionally been kept low key. A new 95th Anniversary model will be launched at Sturgis later this year, so stay tuned—things may just get interesting for Guzzi’s 17 Canadian dealers as Moto Guzzi attempts to increase market share worldwide.