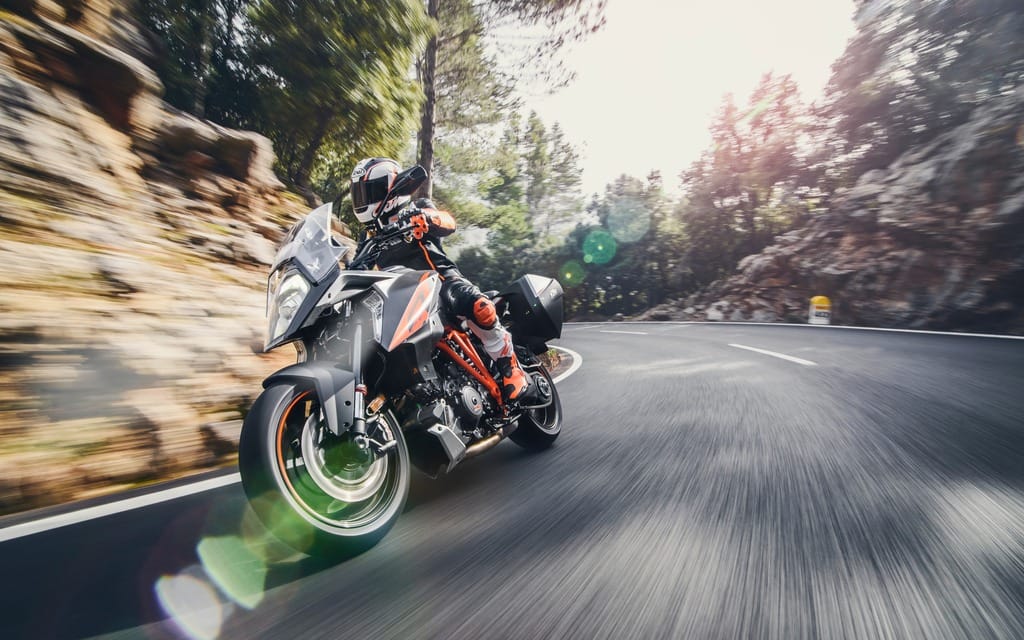 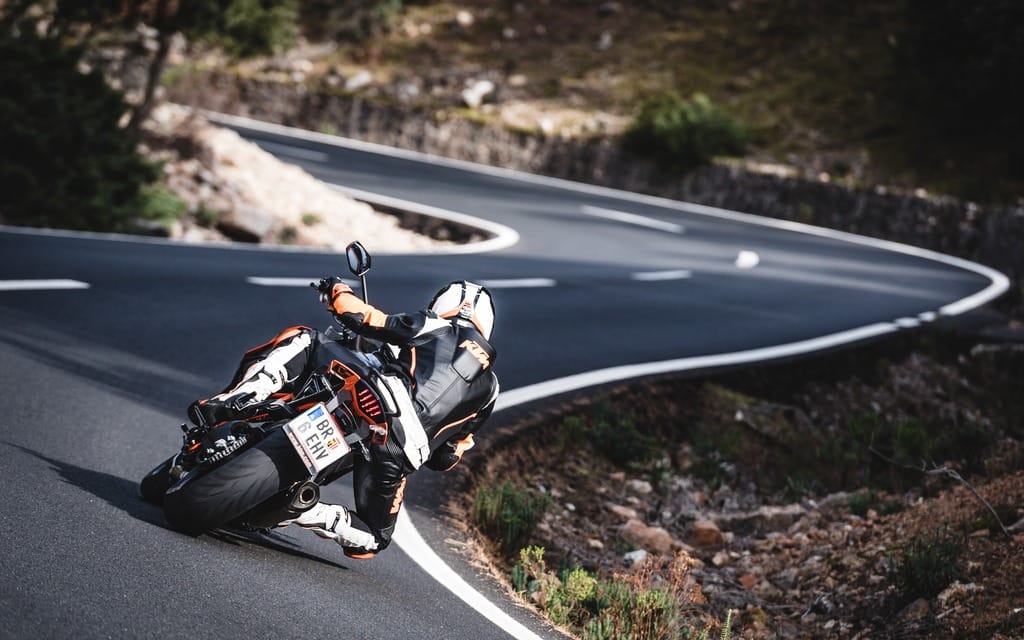 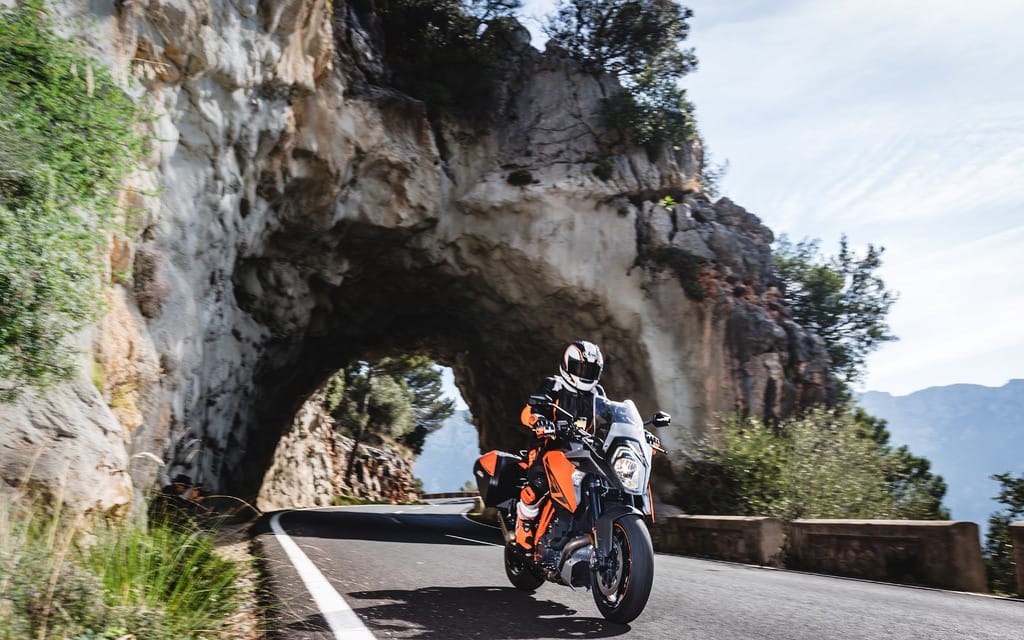 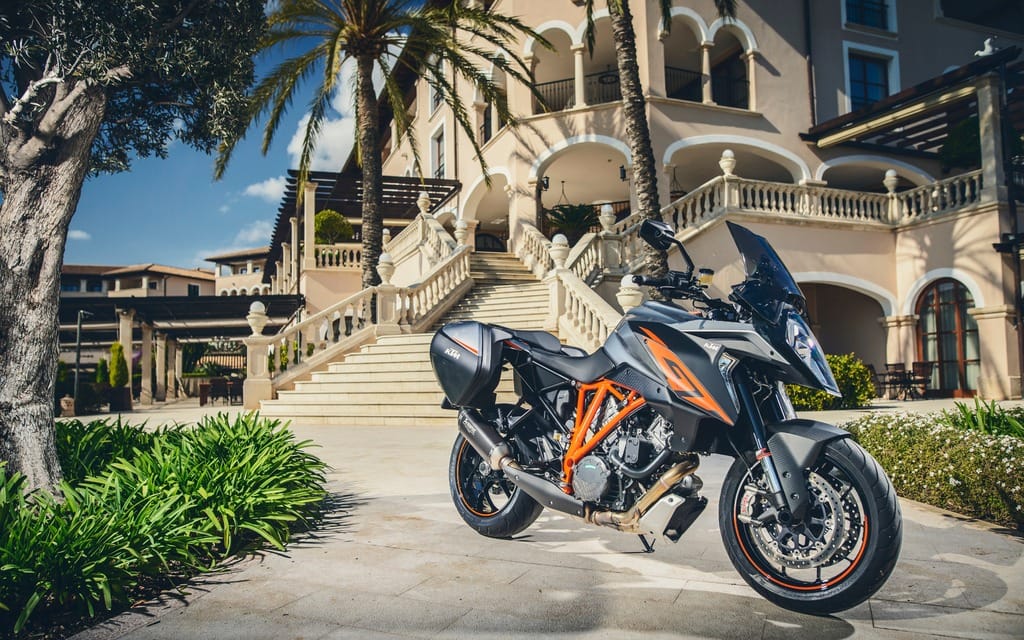 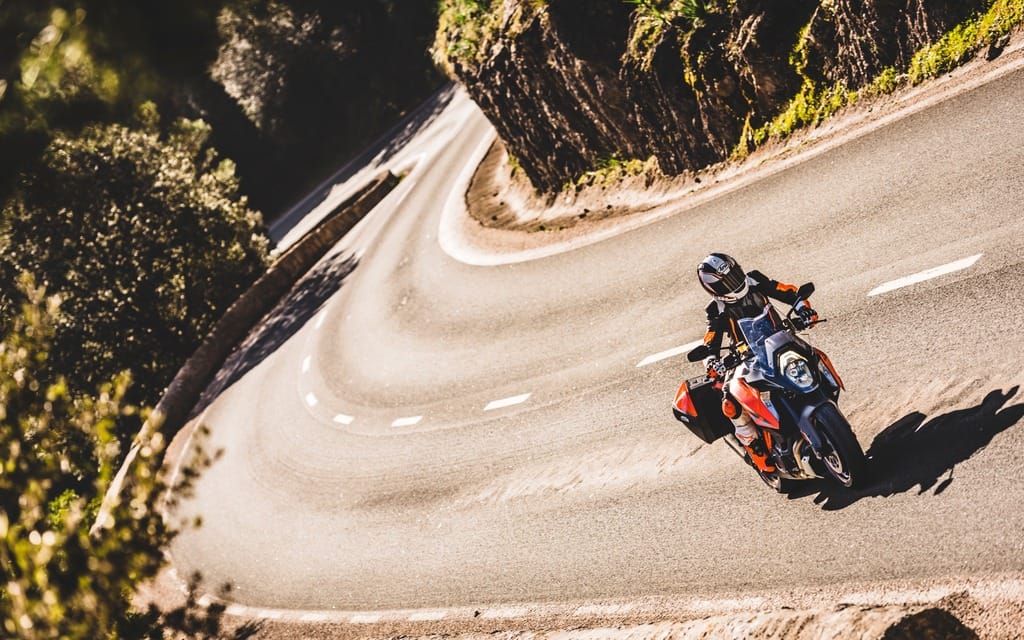 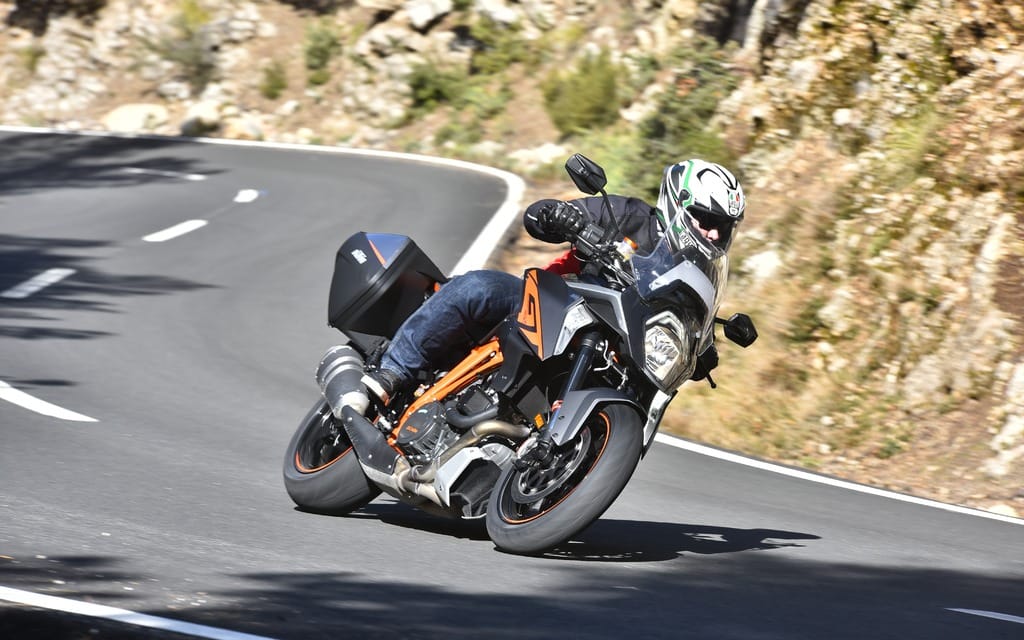 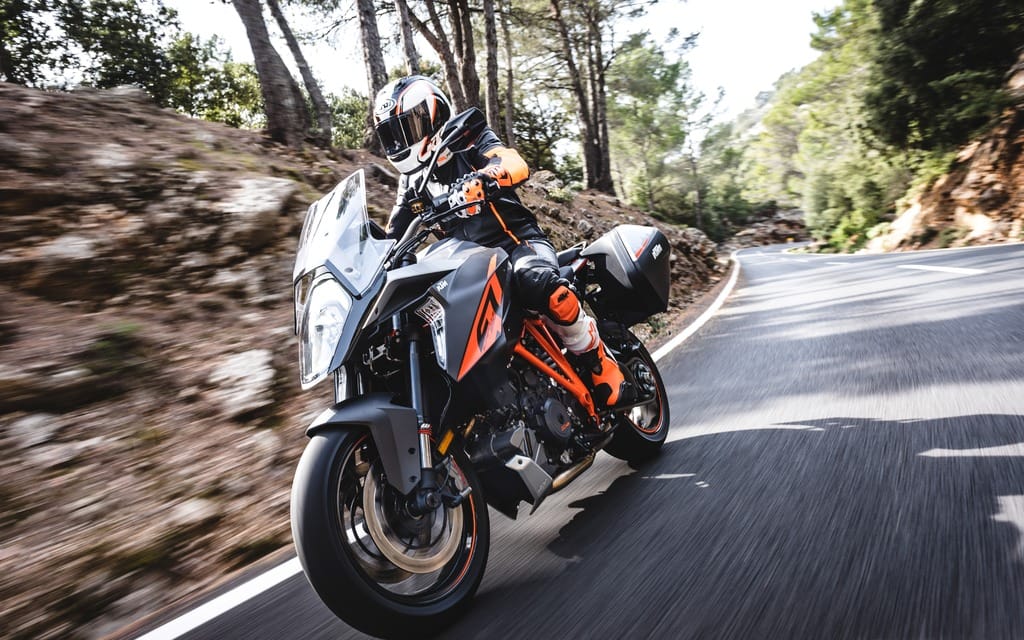 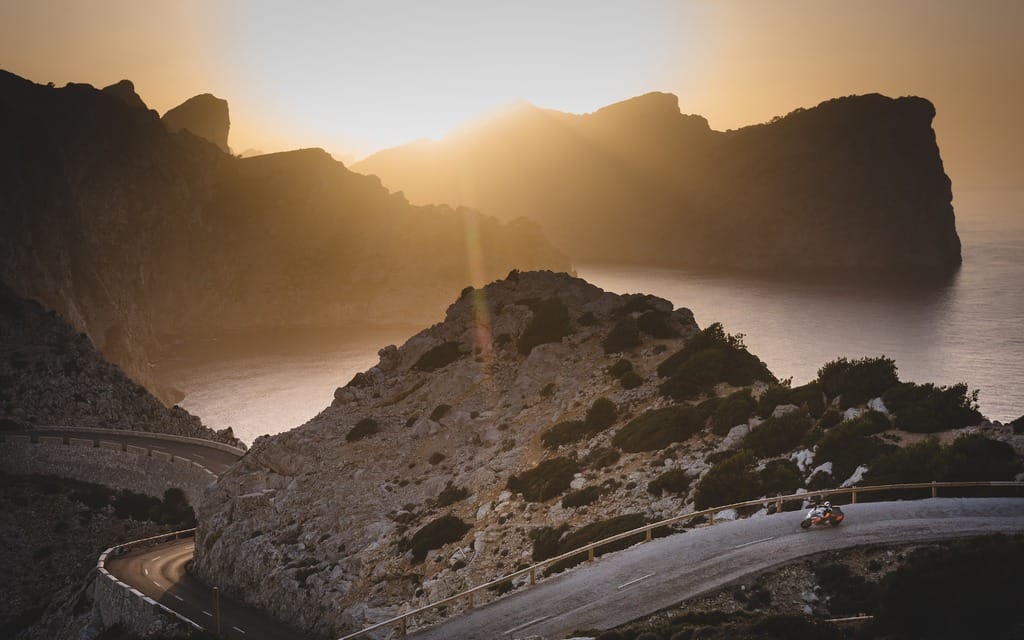 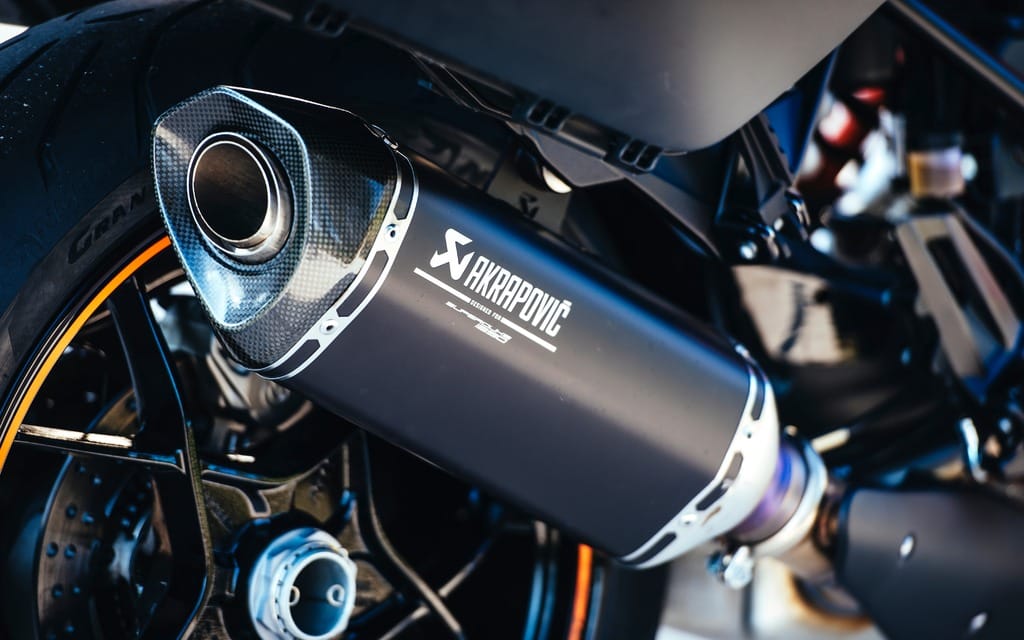 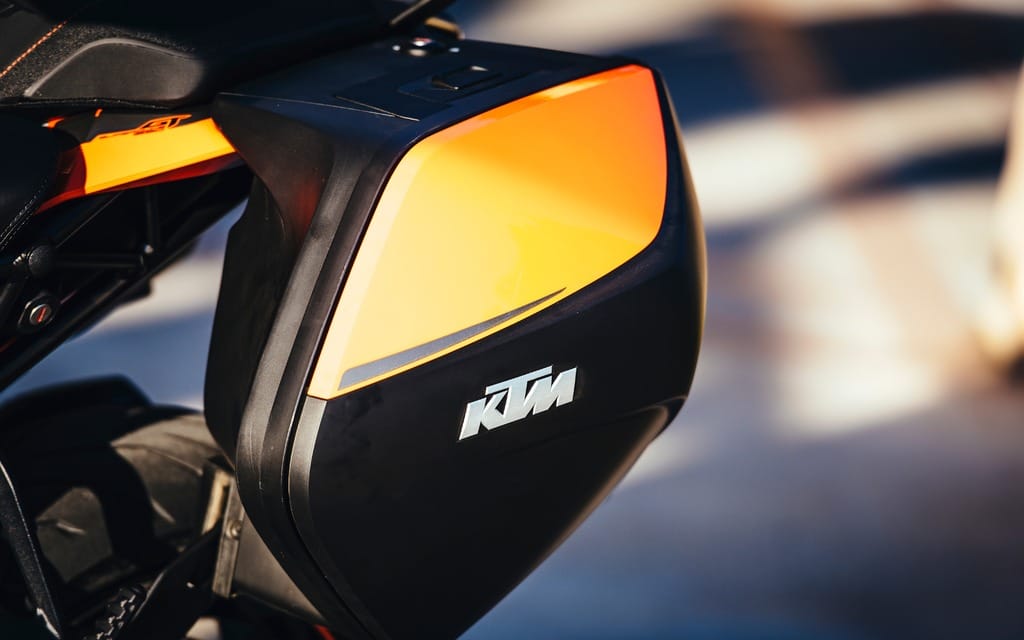 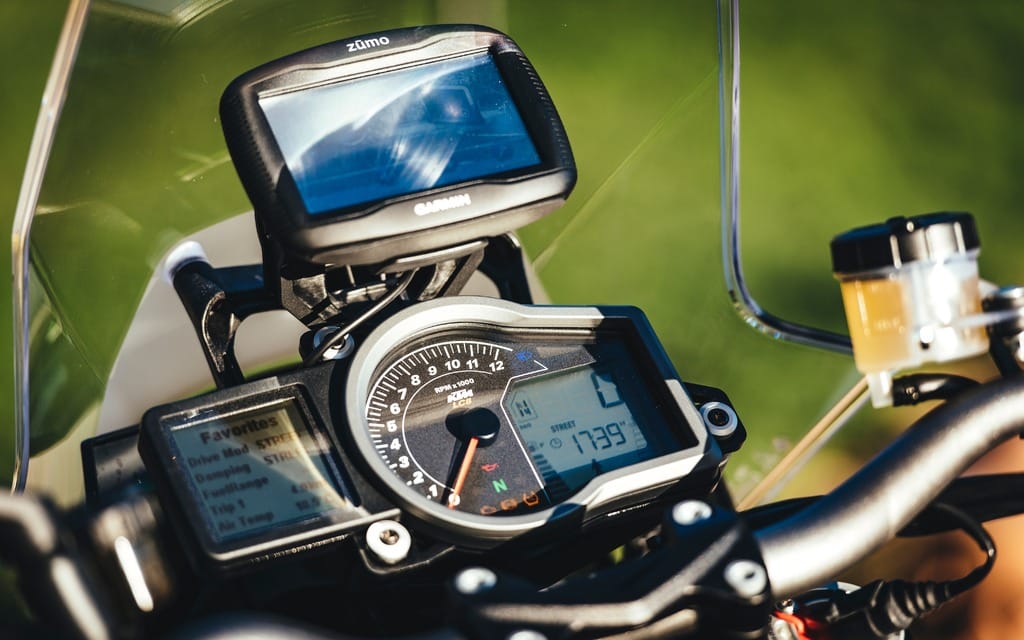 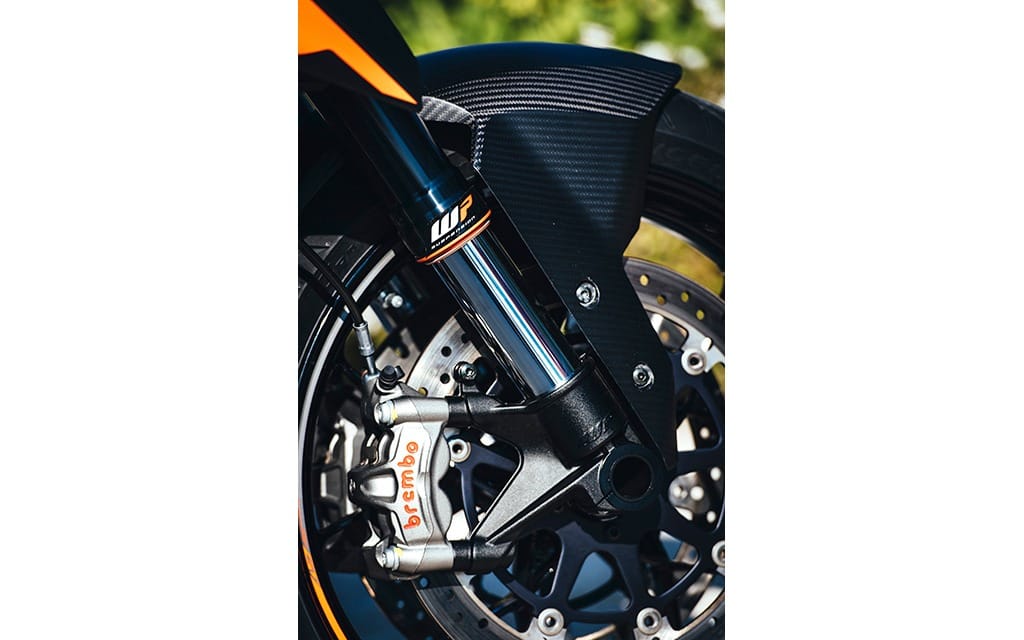 KTM’s sporting tourer can be spank-me nasty or kiss-me nice, as you please. Be careful what you wish for
By Éric Ménard

KTM launches used to be held on motocross tracks and enduro paths. Such was the nature of the beast that a journalist had to be in race mode to do the work. But lately, KTM seems to be aiming at winning the race to offer a better variety of street models than any other brand.

Flying over the Atlantic on my way to Majorca for the launch of the Super Duke GT, I think back to my first ride on a KTM Duke. My sister-in-law, in a moment of pure boldness, had bought a brand new one, and it was a fine ride but far from the exhilarating performance of the Super Duke R, which is a beast—a term that KTM itself poses for the model, and it’s apt: the R could transform the most severe gentleman into a rapturous hooligan with one ride. It’s almost too much of a beast, as I discovered when riding it through the Adirondack twisties two years ago.

A seven-hour flight and a transfer at the depressing Munich airport gets me, finally, onto the beautiful island of Majorca just east of the Spanish coast in the Mediterranean Sea. It’s a popular German-national destination and, as it turns out, is a fine place to launch the Super Duke GT.

KTM has flown in the entire Super Duke GT development team. For a reason we ignore, they’ve also invited Hannes Arch, an Austrian Red Bull air-race champion, who also seems to be a good friend of the development team assembled here. Hannes has come with his lovely sport-action model of a wife Myriam Höller who, we will discover the next day, is also a fearless passenger.

The less sexy but nonetheless interesting Thomas Kuttruf, head of press and public relations, is our MC. He introduces us quickly to the GT. Words like awesome, performance, exceptional, adrenaline, touring and design are thrown into the speech for this first group, out of six waves of journalists, from all over the globe.

Of course, this is not an entirely new bike, but a more civilized version of the R. Just how much more civilized? GT project leader Hermann Sporn offers details. With an intonation and accent that make him sound like Arnold Schwarzenegger, he explains his mission: to take the R’s grunt and shamelessness and make it more accessible, more cultivated—to make it an interesting bike for a day-to-day sport tourer.

Indeed, the Super Duke R is a great bike, but something is missing for riders who want to go the distance on it. It needs more wind protection, a higher comfort level, more headlights, a bigger tank, heated grips, and a longer accessory list for customizing to individual needs.

The next morning, we all meet at the St-Regis parking lot to discover a 35-bike fleet of GTs, all neatly aligned and ready to go. Some even have accessories such as heated seats or Akrapovi? exhausts. Thanks to Kiska design, KTM’s core design house, the GTs are beautiful. They have single-sided swing arms and an aggressive look. Also, KTM has managed to maintain the recognizable design of the R and yet make it more rider friendly.

We meet our group leader. The guy is shy and explains the bike’s features while looking down on it, never meeting our eyes. I wonder what kind of ride leader he’ll be, but I get a satisfactory answer 15 minutes later at 185 km/h on the highway. The man’s shy demeanour does not extend to his throttle hand. He nearly misses an exit, then throws his GT into it at the last moment, losing half of the group in the process. We continue our test ride with the sweeper who happens to be another fast rider but, thankfully, is more attentive to his group.

As we leave the highway, we enter the unbelievably nice network of back roads of Majorca. Riding at a relatively fast pace, we start to experience what we’ve been told to expect. The Super Duke GT feels almost as aggressive as the R but offers a smoother ride. The lowered torque curve of the GT gives us more range and allows for fewer gear changes on the curvy hillside roads of the Spanish island. The quick shifter allows lightning-fast gear changes (only on upshifts), which enhance rider comfort and enable better acceleration.

The heart of the Super Duke GT is the 1301 cc engine of the Super Duke R, making it one of the most powerful mills in its category. KTM engineers thought it would be a good idea to review the engine specs in order to make it more sport-tourer friendly. They figured 144 Nm (106 lb-ft) of torque at 3250 rpm would cut it nicely in the sport-touring regime. And it works—with that much power, and with three ride modes (rain, street, sport), the GT can be precisely adjusted for a desired style of riding on any specific day.

Naturally, it’s in rider comfort that the GT differentiates itself the most from its R sibling. If the latter was a beast in every possible way, the GT is more approachable—or not, depending on your state of mind. The seating position is friendlier with slightly larger and higher bars. The windshield is easily adjustable with one hand and can eliminate buffeting for riders of all sizes, a must for reducing rider fatigue and making longer rides comfortable. And for even more windscreen adaptability, different mounting brackets are available.

Sport touring demands better fuel range and the GT offers a larger 23-litre tank, which in theory would allow up to 400 km of riding before refuelling. What we experienced was closer to 315 km on a full tank, with a 7.4 litre average per 100 km. Considering this as a sport-oriented tourer, that’s a fair mileage (though many sport-oriented touring riders might ride slower than we did and subsequently get more pavement out of their fuel tank). The tank also meets the touring orientation of the GT by offering better lower body protection. Heated grips are standard but a heated seat is available only as an accessory.

As with any premium brand bike, options for the GT are plentiful. It is possible to order bikes equipped with an optional hill-hold system, which will employ the rear brake for five seconds when starting on a hill. It’s completely unnecessary, but fun to have. There is also an optional luggage system for riders who want to use the GT as a real touring bike. An engine-slip regulation system is also available to keep the rear wheel from losing grip when chopping the throttle or dumping the clutch.

Tuning the WP suspension of the GT for a desired usage is easy. Just toggle between the modes using the handlebar-mounted switch and choose between comfort, street, and sport mode. The suspension ECU will adjust the damping of the front fork and rear shock in no time according to your riding style and road surface. On the slippery old roads of Majorca, we got to experience the high level of confidence the ECU can provide. In spite of the fast-paced, all-day ride, only one rider, who had the weird idea of cancelling the ABS system, crashed.

Superbike level deceleration is ensured by the two radially mounted Brembo M50 four-piston Monobloc calipers, actuated by a radial brake pump pinching floating 320 mm discs. The Italian stoppers are tuned for a sporty ride and are combined with a Bosch cornering ABS system. The GT ABS system even offers a Supermoto mode if you have the balls to lock up the rear wheel and slide into corners.

It is still an impressive bike, numbers wise: 173 claimed hp for 228 kg fully fuelled is a fear-inducing power-to-weight ratio. But it’s backed up by a top-quality chassis combined with semi-active suspension and an extensive list of rider’s assistance systems, riding modes and added features. What the Super Duke R lacked in terms of versatility, the GT offers. With a rider position and comfort level seemingly aimed at the older and richer rider who likes aggressive bikes, the GT is a Dr. Jekyll and Mr. Hyde kind of motorcycle. Like any sport tourer, it can be fairly smooth in town or on a smooth weekend ride with the missus. However, in the blink of an eye and with the toggle of a switch, this testosterone-inducing bike can also be transformed into an absolutely stellar ride.

The Super Duke GT will be available in Canada this fall.