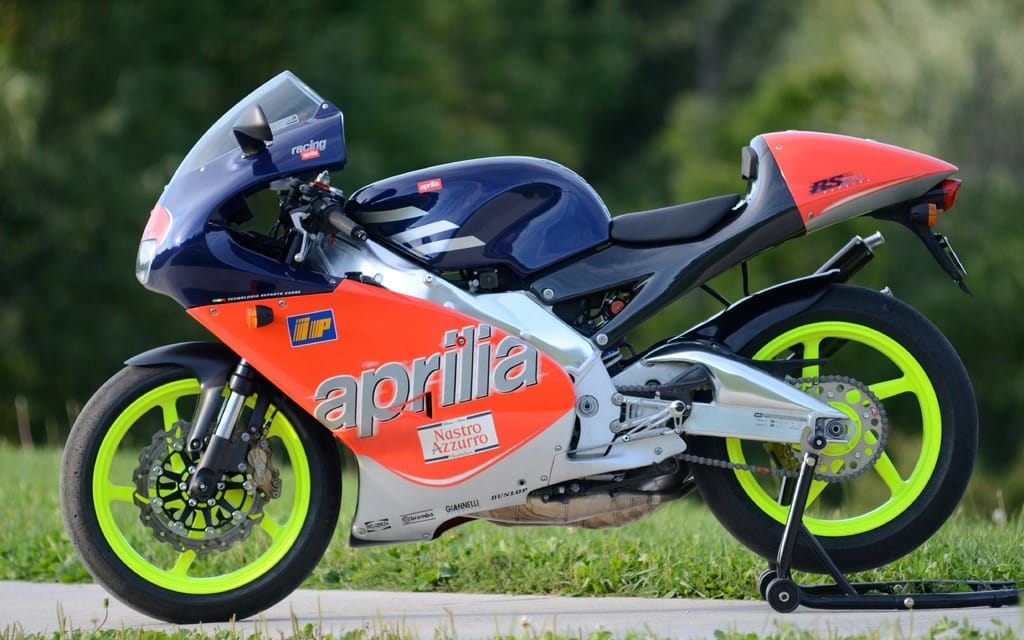 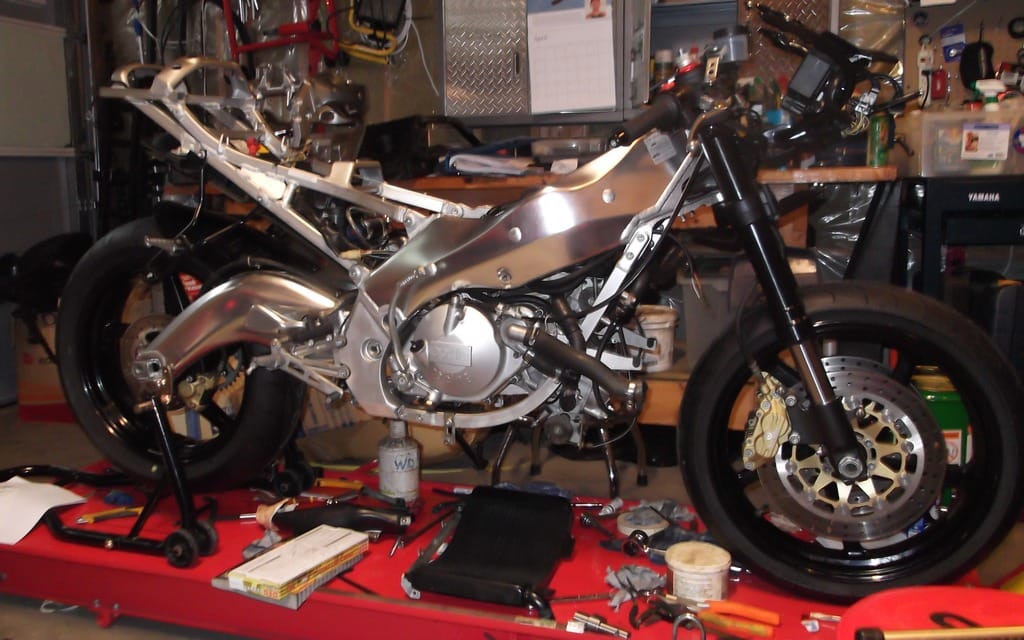 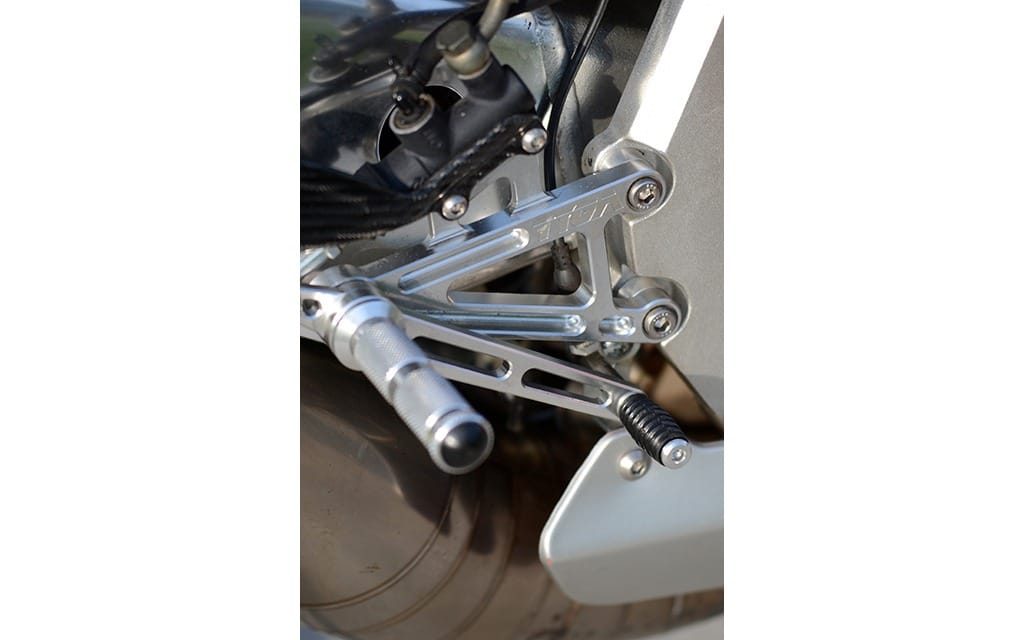 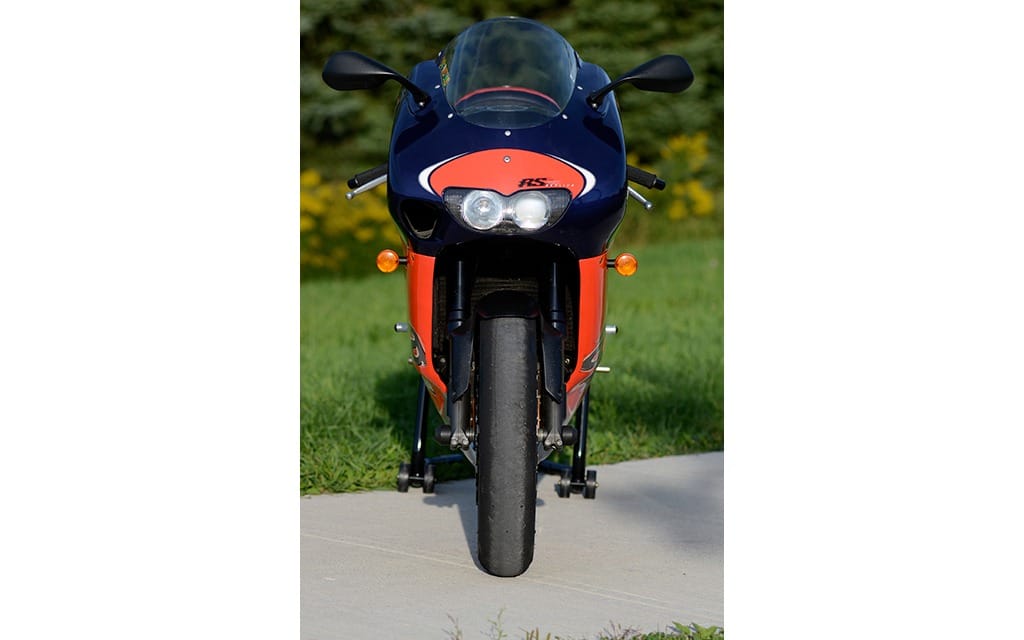 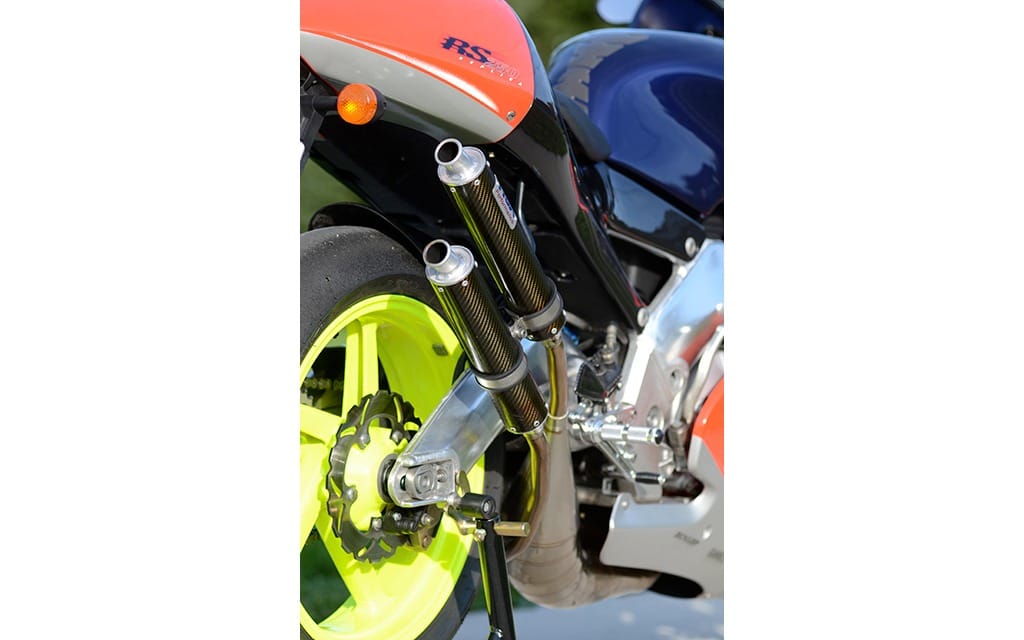 Getting an Aprilia RS250 to Canada was only the beginning
“Against bureaucracy, the gods themselves contend in vain.” —with apologies to Friedrich Schiller

“Honest, Judge, I thought she was fifteen.” —R.S. Noodnik, former school board vice-chairman

Had John Steinke glanced into the future when he was counting out money for this Aprilia RS250, he might have folded up his wallet and slunk away from it. That would have been a shame, because the little two-stroke RS is not only so rare that you might never see another in Canada, it’s also a screamer of a track-day bike. At around 55 horsepower and 310 pounds, it’s got a better thrust-to-weight ratio than other two-strokes of its ilk (Honda, Yamaha), and though it’s nowhere near the power of, say, a GSX-R750, its Suzuki-sourced mill is reliable, its handling (with a banana swingarm that makes room for the two-stroke exhaust, 41 mm Showa inverted fork, Brembo brakes, and aluminum-magnesium alloy frame) is so light and precise that a U.S. magazine described its track-only cousin (the only kind available in North America, and virtually identical to Steinke’s bike without the lights and mirrors) as “one of the finest handling motorcycles of all time.”

But instead of the future, Steinke saw an RS250. With lights and mirrors. At a dealership, in Japan, where he was working for Toyota a few years ago. After he returned to Canada, the notion of reaching out to Japan for another bike (he has a Panigale and a Daytona 675) appealed to him. “I wanted something unique, rare, something that I’d want to hold on to and have some fun with.”

He located via the Web a “pretty much brand new” RS250 at a dealership, and sent a deposit to a Japanese exporter. More money followed, and finally the exporter took possession of the bike. But there was a problem: import rules allowed a 15-year-old bike into Canada, but this one, a ’98, at the time “didn’t quite meet the 15-year rule.”

But Steinke wanted that bike, dammit. It occurred to him that it would be shipped to Canada in a disassembled state, and therein lay a solution.

“Before I bought it I did the research on the RS series, and they were produced from 1994 to 2004. And virtually they were the same bike.” The ’98 model had improved suspension, but “the frames were identical through the whole production run.”

Through the exporter he located a 1994 frame, “and it had the proper title and everything was legal on it, so I bought the frame for $100.” Both frames were stashed in a shipping container, along with the engine, of course, other components, and even some spare parts. As long as he was paying for the container, he figured, he might as well fill it up.

That container did some travelling. After the ship left Japan, he followed its course on the Web as it went to China, then the U.S., docking at San Diego, and finally up to Canada, where it was off-loaded in Vancouver. After that, it travelled by rail to Toronto. Finally, Steinke got a phone call from Customs: your thing is here.

Understandably excited, he hitched up his trailer and drove to Pearson Airport, where he ran into a bureaucracy that might have foiled a man with less tenacity. He was “pretty positive” that his papers were in order, so he got into line at Customs, worked his way up to the counter, and discovered that, no, his papers were not in order. The Vancouver company that received the Aprilia and then shipped it to Toronto “glitched up the paperwork—they put their name on it as the ultimate consignee, where it should have been my name.” The customs official (“she was very nice”) told him to call the Vancouver shipper and have the manifest changed. “So I phoned Vancouver, and some lady there said no problem, she would fax the information to the customs office.”

Back in line, Steinke worked his way up to the front again, where he ran into a different customs official. “I explained to her what was going on. I was really nervous, I’d never done anything like that before. I said there should be a fax.” There was a fax. And as the Customs official read it, “she was shaking her head.” To Steinke she said, is this you, is this your shipper? “The Vancouver shipper had taken the manifest and scribbled out her name and company name and pencilled in my name.” Your shipper, said the Customs official, is breaking the law. “So the Customs lady phoned out West and berated [the shipper], said she could be charged. And I’m thinking, there goes my bike.”

When the Customs official finished berating, she told Steinke he wouldn’t get his bike that day. “I want your shipment to be re-manifested, and until I get a clean manifest with your name typed in as the ultimate consignee, you can’t get it.” As long as he was at the head of the line, Steinke asked her to double-check his other paperwork, which she said was fine. “So I got back out of line, called Vancouver, and the Vancouver lady said ‘I’ve been doing this for a number of years and I’ve never had an issue with that.’” However, she had a satellite office in Toronto and could get her partner there to re-manifest the shipment. However, it was closing time; he’d have to wait. “So I had to drive all the way back to Cambridge from Toronto.”

Around noon the next day, with his new manifest in hand, Steinke hooked up the trailer and set out again for Toronto. “It was around 3 o’clock in the afternoon when I got to the Toronto airport office. I got back in line, went to the wicket, and sure enough, I got the same lady that I had the day before. I showed her the stuff and she said do you have all your paperwork in order this time? I said yeah, I think so. So she went through it and asked me questions about who the previous owner was and who the exporter was and I answered all the questions and she said how do you like driving to Toronto? I said, yeah, it’s all right. She goes, well, you’re gonna have to do it again tomorrow because it’s late in the day and we can’t inspect your shipment. And I was like, okay. It is what it is—she’s got all the power and I can’t debate it. So then she was flipping through the papers some more and asked me a few more questions, and then she just started stamping stuff. I didn’t know if that was good or bad, and she goes, well, because I’m in such a good mood today I’m gonna waive inspection. Just take the paperwork to the cashier, pay your taxes and stuff and you can go get your bike.”

After he got the Aprila back to Cambridge, he spent a couple of weeks reassembling it, then started it. “That first time I was nervous, because I didn’t know if I’d put it together properly, got the wiring right. So it was kind of a leap of faith, one for buying it because I never met the exporter and I’m sending him wired money transfers, and you don’t really know if he’s legit. But it started on the third kick, and then it’s like all the tension goes out of your body.”

Still, he had to get it certified for the road, and there he again ran into paperwork. “The title was all in Japanese. The exporter had it translated for me, but with the MTO you have to use their certified translator, so I had to mail the Japanese title to their translator and wait for it to come back.” It did, and with all his papers once and for all in order, he was able to plate the Aprilia.

Was it worth all that trouble? No doubt, Steinke says. “The handling is fantastic. It’s so light. It’s like riding a mountain bike practically. It’s so narrow. On track days it helps me to be a better rider. Teaches me proper gear selection. I can carry a lot more corner speed because it’s so light and manoeuvring is so great on it. I make up so much time through the corners compared to the bigger bikes.”

He’s made a few modifications. He bolted a set of wave rotors to some spare rims and shod them with slicks. He installed a stainless steel exhaust system, and has aftermarket bodywork for use with those slick-shod rims on the track. He’s run it at Calabogie, Shannonville, Mosport, and Grand Bend, and plans on “keeping it forever. It’s my little collector bike, and I love it.”

The whole exercise cost a bit—about $1,500 for shipping, more for GST and other niceties. But now that it’s all wrapped up and ready to ride, he’s happy. “I have no regrets. No complaints.”