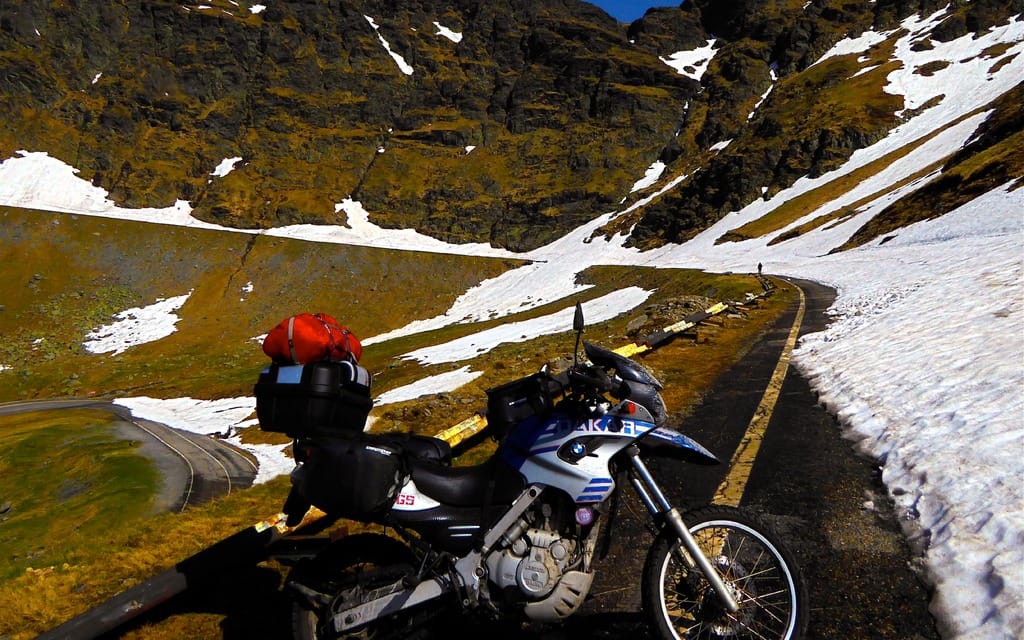 On April 29, 2015, my dad and I set off to Europe for my very first time. He had bought a bike the previous year in Ireland and he and my brother toured around Ireland and the U.K. Now it was my turn to have some fun. We picked up the bike at the storage place near Kinsale, Ireland, and took a ferry to France. We bolted through France, hoping to make it as far as Greece and back to Ireland in six weeks. I’m a 12-year-old girl who loves dirt biking and travelling by motorcycle.

Down into Italy we went. My goal? To see the Leaning Tower of Pisa before it collapses for good. Upon entering the green square which holds the Tower a hundred tourists were pretending to hold the Tower up while another hundred were snapping their photos.

We boarded a ferry to Split, Croatia, from Ancona, Italy, and rode along the coast to Dubrovnik. After leaving Croatia our next goal was to make it to Athens, Greece, so off we went making our way through Montenegro, Albania, and Bosnia Herzegovina. Albania was a very poor country; the streets were filled with garbage with many homeless people scavenging for food. It really showed me how fortunate I am.

Athens was absolutely incredible! The weirdest thing was that all of these magnificent structures were placed in the middle of a not-so-beautiful, busy, crowded city. The thought of taking a ferry to Turkey crossed our minds, but knowing I would have to cover up my blonde hair and blue eyes so I wouldn’t get attention scared me. I know that Turkey is a Muslim country and with the war we weren’t going to risk it, instead we went up into the three fingers of Greece and up to Bulgaria.

Another place, another culture. In Romania we took the Transfagarasan highway—considered one of the most beautiful highways in the world, though there was the chance that at this time of year (late May) we would hit snow. The first hour went smoothly; no snow, no problem. Then we started to climb in altitude and before we knew it we were swerving around snow banks blocking the highway. We made it as far as anyone could have—in front of us a lay a monstrous pile of snow, blocking the highway completely.

Up into the Ukraine we went, but not without a little trouble getting through security. Asking us lots of questions. I think it might have been difficult because of the situation with Russia. Getting through was a relief; we stopped at an outside bank machine to get the new currency and 10 kilometers away we realized dad had put his phone down and left it there. Trying to backtrack we got lost in the town and by the time we returned the phone was gone.

The Ukraine was the country where we took the most back roads, and it was fun but ever so covered in potholes. I’m not exaggerating when I say every metre or less there’s a pothole. Along we went testing our suspension to the limit and rattling everything we carried. Poland came and we were sad to leave the Ukraine knowing we hadn’t found any pierogies to eat. But that’s OK because we found some in Poland and they were fantastic. Through Czech Republic and Germany, Luxembourg and Belgium, Holland and back to Belgium we went. When visiting Belgium keep in mind you may cry from all the graveyards and monuments from World War 1. We visited plenty of those types of things, including a real trench dugout from the War. A farmer also gave us parts of a bomb he had found in his field recently from the Great War, no reason to give them to us, he just did.

Riding along the coast of France is magnificent! The smell of the ocean and the bright blue sky put me in a very happy mood. Somehow we ended up finding a ferry terminal by accident and took a ferry to the white cliffs of Dover in the U.K. The U.K. is a very beautiful place to visit, but if you’re trying to save money, DON’T GO THERE. The prices are extremely overpriced, the price for one of our campsites was 20 pounds (about 40 dollars) and the price for a luxurious hotel in the Ukraine was 20 dollars.

Our GPS stopped working in Poland, now we had just entered London with no GPS. Bad idea. We accidently found Big Ben, but I still wanted to find Abbey Road and Dad wanted to find the Ace Café. Up and down we went until we finally decided to leave London. We found a hotel just outside of London and we finally fixed the GPS! The next day back into London we went, and easily found both Abbey Road and the Ace Café. Another ferry back to Ireland and before we knew it we were on the flight back to Canada.