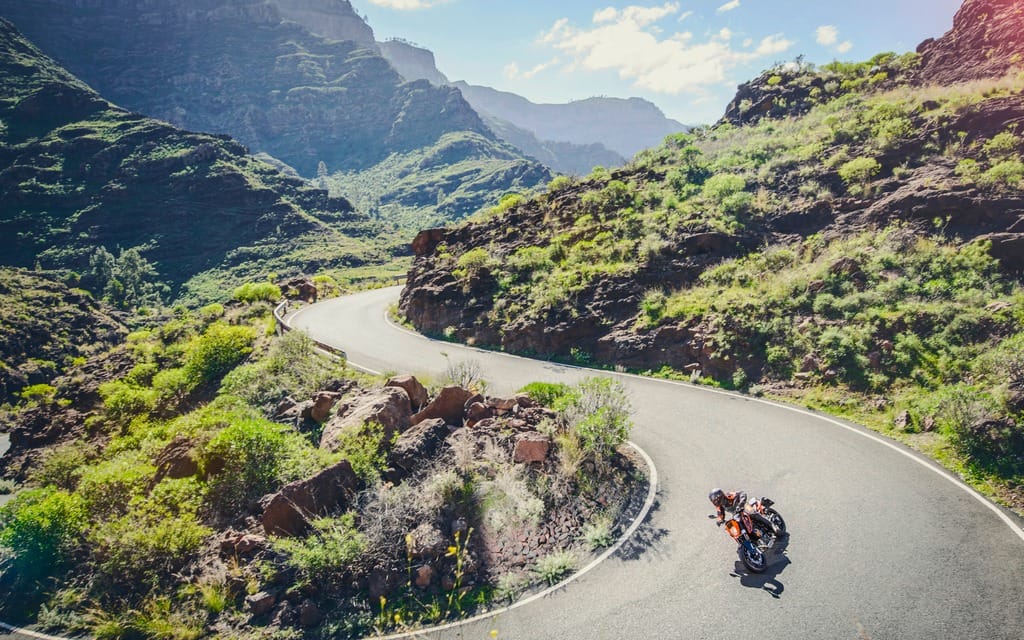 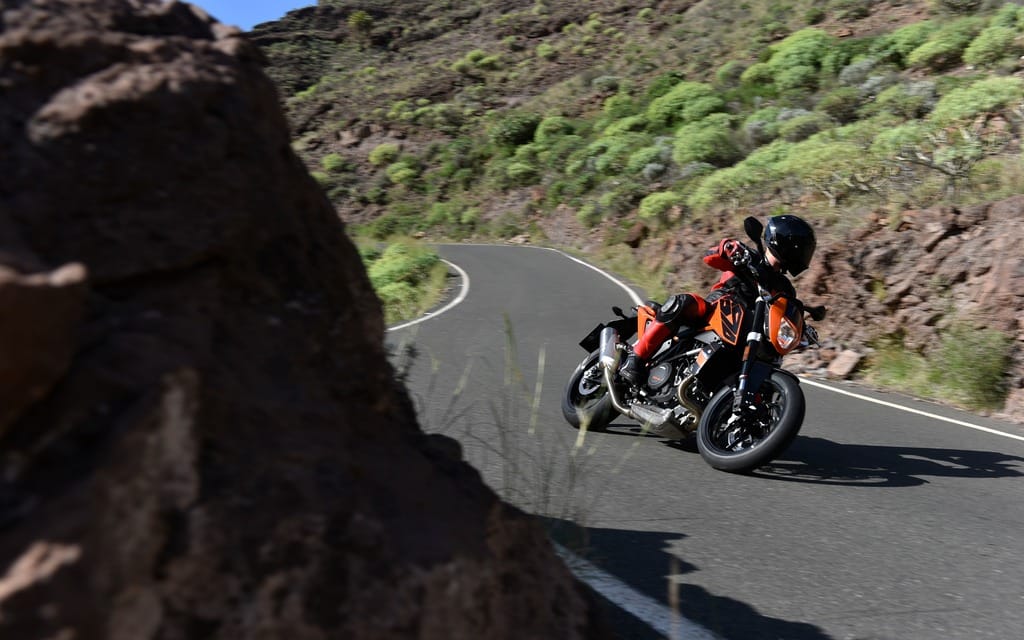 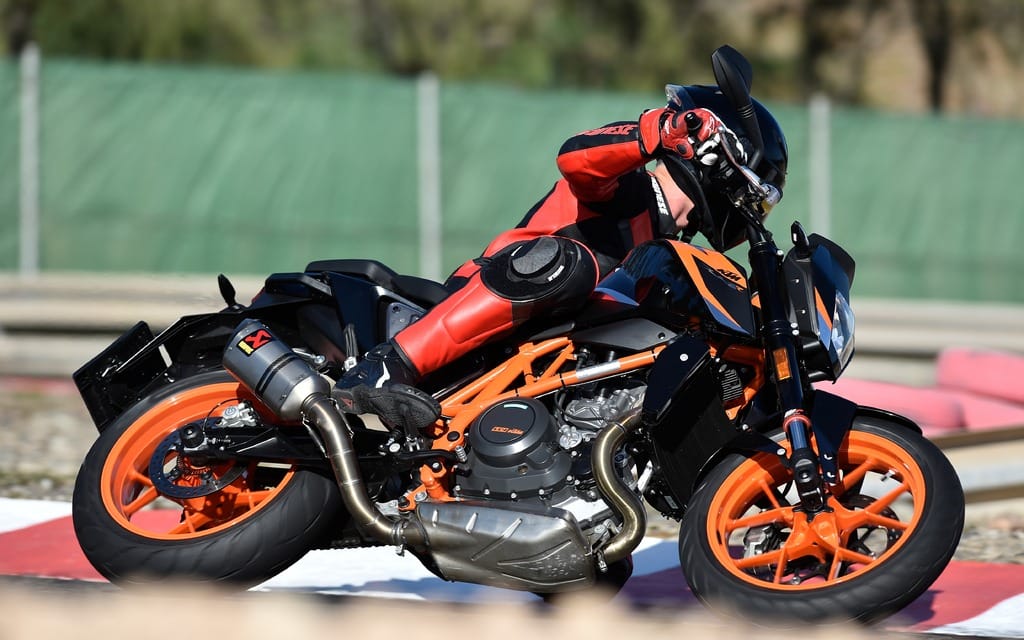 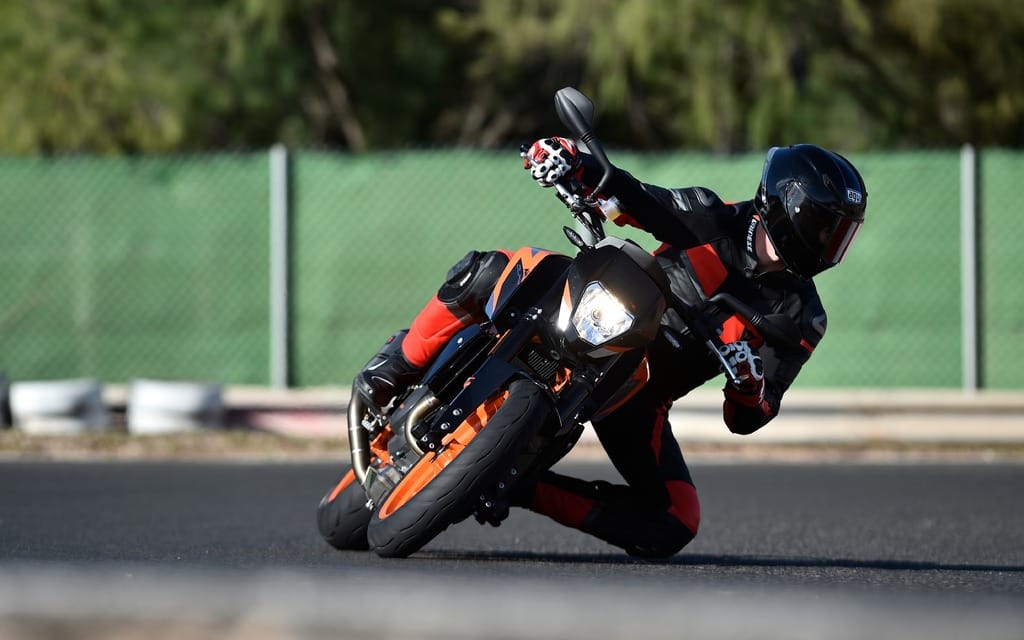 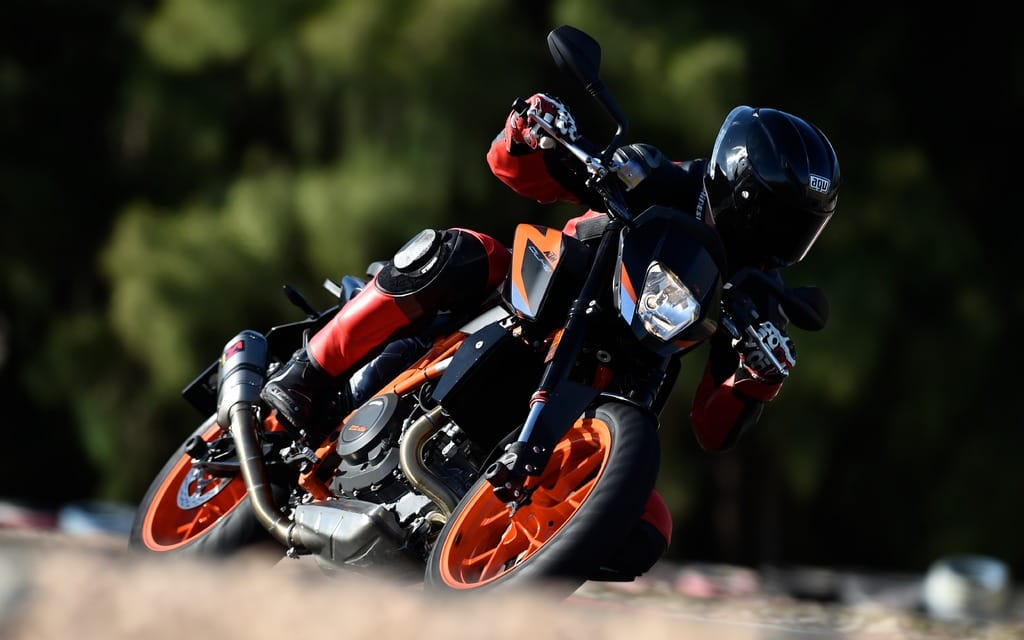 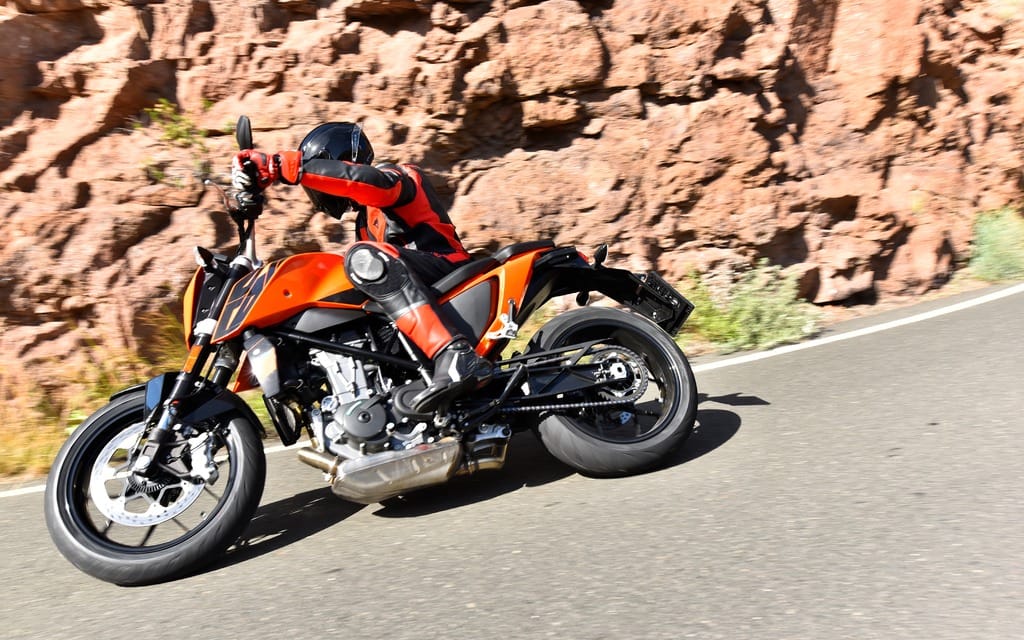 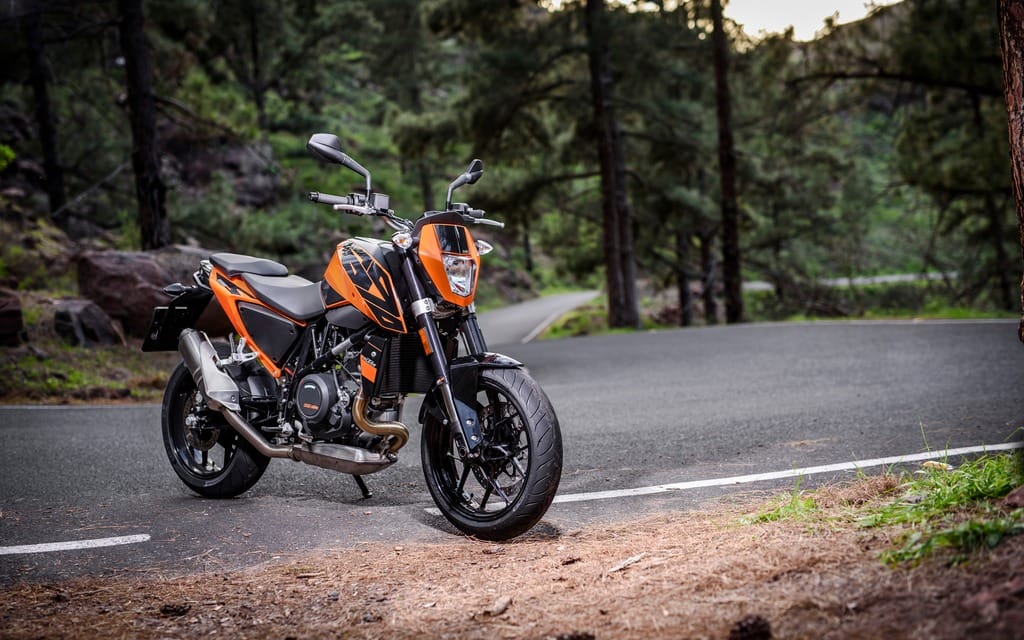 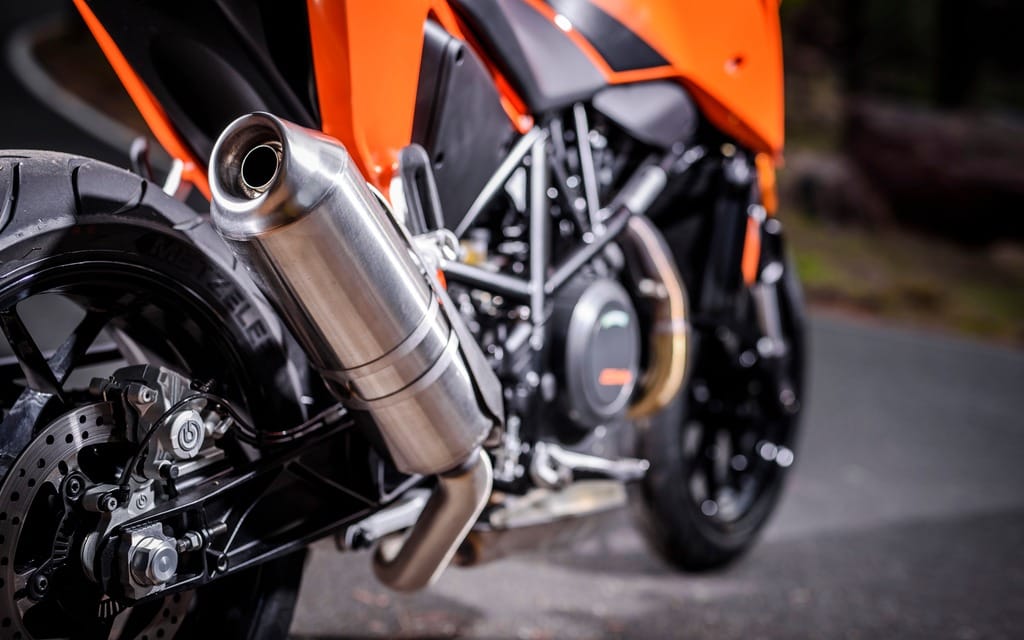 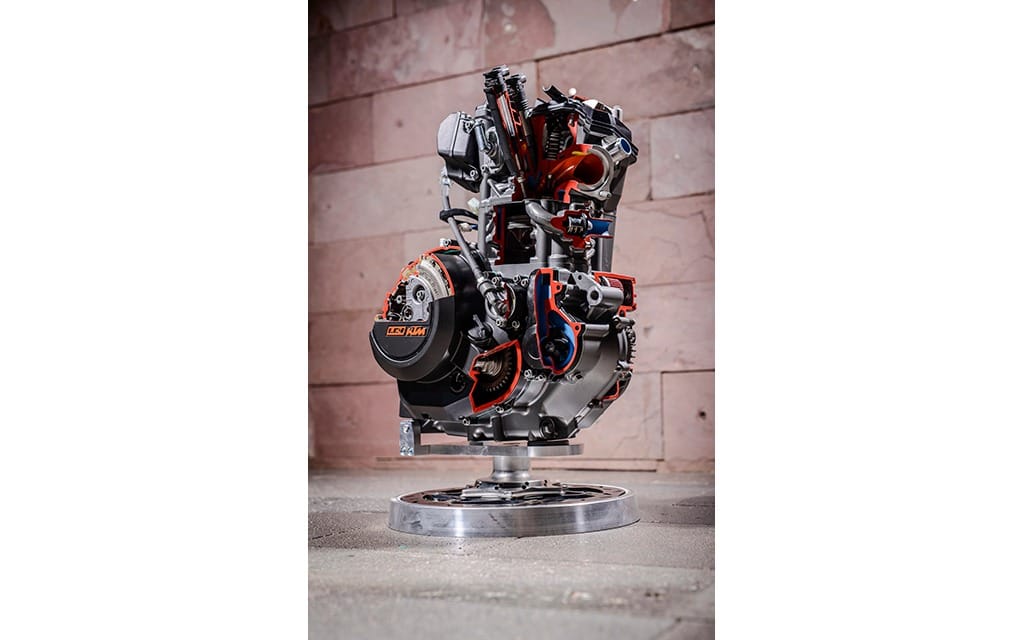 KTM refashions the Duke from bone-shaker to deal-maker
Now I’ve done it. I haven’t crashed. Something far worse. I’m sucking fumes from the well of my creativity and the brain won’t fire. At issue is that in the recent review of the Husqvarna 701 Enduro and Supermoto I used up everything clever I could summon about single-cylinder motorcycles. And yet here I am addressing the single-cylinder KTM 690 Duke. And it’s not just another single. It has the exact same engine as both Husqvarna 701 models. (Don’t be fooled by the “701” moniker.) I’m going to slip out of my responsibility as a writer and into my riding gear for the day ahead.

Clever people staff the offices of motorcycle manufacturers. When they choose the site for the launch of a new machine they do so with the machine’s merits in mind. It explains why we’re always dragging knees at Spanish circuits on sportbikes and plonking through the American West on wide-hipped cruisers. (Reverse the example above and you can imagine the outrage from candy assed hacks—me among them—were we forced to ride from Phoenix to Flagstaff on an R1.

The day prior to the KTM launch, I hitch a ride in a minivan with a mountain bike tour company to the top of the highest mountain on Spain’s Gran Canaria Island along nausea-inducing roads. The roads are without shoulders and rimmed by calf-high rocks that would stop a minivan about as well as snow fence could thwart the progress of a jetliner. We’re only a blown tire or a missed apex away from a tragic (and tragically brief) mention on the CBC news. As the passenger next to me turns the avocado green of a 1970s appliance, I tell him I have a feeling that I’ll be riding these very same roads the next day on a motorcycle. “Good luck with that,” he says, miserably. It turns out I’m right.

KTM’s Duke was an oddity when it was released in 1994 and it remains an anomaly today. In the first decade it was a machine for riders addicted to crushing vibration. (Alarmingly, KTM claims 68,000 total single-cylinder bikes on the road, of which a good proportion are surely the vibration-suffused early machines.) And for those who think I summon hyperbole to mask the failure of my imagination, I swear on the grave of Spiro Agnew that I’m telling the truth. Imagine assembling a MotoGP engine with tools no more robust than your fingertips and carpenter’s glue. Now rev that engine to 15,000 rpm. That vibration? Just like an early KTM single.

The very nice and very smart KTM engineer that briefs us prior to our ride throws out staggering numbers. Fully half of this engine is brand new compared to the 2015 edition. The goal was to increase power and torque and to reduce vibration. This is seriously more involved than bold new graphics—a claimed 33,000 hours of manpower were invested in the bike with the engine receiving 20,000 hours alone. (It wasn’t specified how many workers were tasked with the project, whether a team of 80 or one solitary man who’d worked unceasingly from the eighteenth century.)

Hog out that bore, the man said, and the workers did as they were commanded. And shorten that stroke, too. Furthermore, we’ll never meet stringent noise regulations with a roller chain hammering away inside that mill, he said, and so a silent chain was found. The result? Vibration has been halved from the acceptably smooth 2015 model—at least that’s what KTM claims.

As we fire the machines in the parking lot of the hotel the first surprise is how quiet the engine is. This is most welcome, as singles are not engines that have an appealing exhaust note—the quieter the better. By the time we reach the end of the hotel’s winding driveway (which is roughly the point at which the original Duke would have terminally numbed toes and the fingers) it’s obvious that vibration has been lowered to acceptable levels.

A few turns later and we’re on the very same road that I’d taken only the day before—it’s infinitely more compelling on a motorcycle than in a minivan. And this is where the choice of launch location so perfectly matches the motorcycle that KTM may as well have stuffed my pockets with stacks of bills as payola. With switchbacks and blind corners and slow-moving cars to slalom through, it’s the kind of road that would be cramped on anything larger than a lightweight motorcycle with a powerful (73 claimed horsepower) engine.

At our disposal are both the base model and the R version, but since we North Americans do not receive the up-spec R, I let the European hacks claim the R and stick to the base Duke. Traction control—optional on the base model and standard on the R—is hardly essential on a tractable big single. The important bits—ABS and a slipper clutch—are rightly fitted at the factory for both models.

As the road wends into the Spanish mountainside the pace quickens. How fast? At the beginning of the ride, I thought I was overdressed in the full leathers that I’d brought along directly from the Ducati Panigale 959 launch, but before long I’m skimming my knee through corners like I did back in Valencia. This may sound foolhardy (indeed it is) but as long as I don’t slam into a three-wheeled Vespa delivering empanadas or launch my ass into the abyss it’s uproariously fun. It certainly helps that the Spanish pavement is as tacky as five-year-old Joe Rocket riding suit. No matter how hard I push, the 17-inch Pirelli tires (120 section front, 160 section rear) do not slide.

Supposedly the seat is improved, but my buttocks only ever slide from side-to-side across it in preparation for the next corner. And to give you an accurate reading on vibration I’ll need a stretch of motorway and the opportunity to become good and bored. Canada—blame our geography—doesn’t offer up roads like this in abundance. Or at all. But we do have racetracks.

After lunch on the beach (where I look absurd in these leathers) we ride to a little seaside racetrack for a few hours of knee dragging. It’s reflective of the brilliance of the roads on the island that the track is far less interesting than just about any public thoroughfare. And the racetrack’s asphalt has far less traction than the mountain roads we’ve plied all day. I save a lowside by jamming my knee into the pavement more than once as the front wheel skitters away from me. If you’ve ever wondered why sportbikes have clip-on handlebars, it’s so that the rider can move his weight forward and onto the front wheel.

What impresses about the Duke is its sophistication. The demise of single cylinder motorcycles as street bikes (virtually all serious off-road bikes remain singles) was well deserved. KTM is perhaps the sole remaining manufacturer to invest serious research and development into road-going singles. And it shows. After the racetrack session, we return to the hotel along a monotonous section of motorway, and, finally, I’m able to ride the Duke in a milieu reminiscent of what we have at home.

A few quick upshifts and 120 km/h is reached and surpassed. And KTM cannot be accused of telling lies, as vibration is modest and the seat comfortable. A stated goal of marketing the new Duke is convincing the world of the merits of single-cylinder propulsion. It’s reminiscent of the battle that faced Ducati a generation ago when they tried to convince motorcyclists that V-twins could be suitable powerplants for anything other than sorrowful cruisers. At the time, in the ’90s, the twin-cylinder engine was considered a relic of a time long gone. Now, 25 years later, in configurations that include parallel-twins, V-twins, and flat twins, it’s at least the popular equal of the ubiquitous inline four.

I’m not sure the merits of big singles can equal those of rumbling twins, but if anyone can sway public opinion it’s KTM. The brand has had, in the past decade, the Midas touch with off road motorcycles—managing to simultaneously outsell the Japanese while continuing to foster the aura of a small-production European brand. Until the day comes that enthusiasts migrate en-masse to singles, the Duke will have its hands full in the marketplace with cheap-and-cheerful parallel twins from the four Japanese brands, in addition to a slew of useful machines from fellow European manufacturers. If your heart is set on a single, head to a dealer and draw up the paperwork. If you’re considering a mid-size twin I’d suggest broadening your search to include the Duke. It may just be what you didn’t know you wanted.