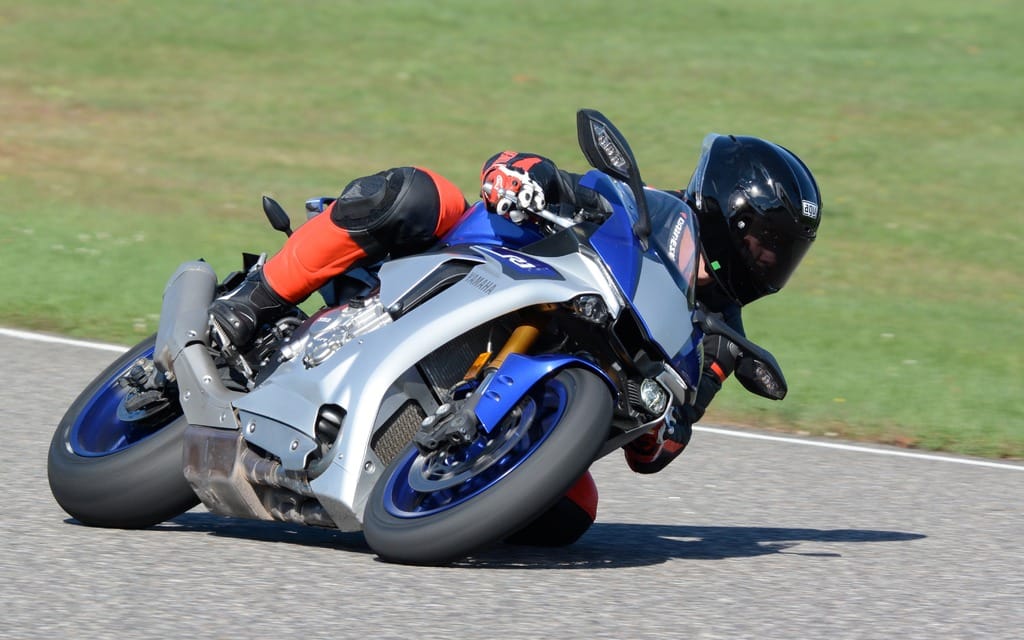 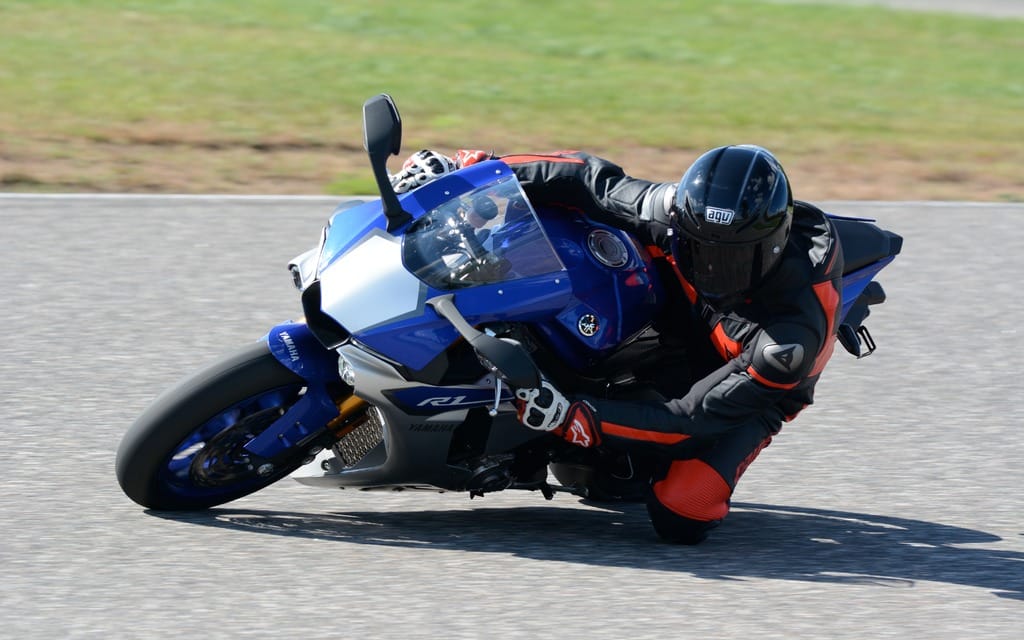 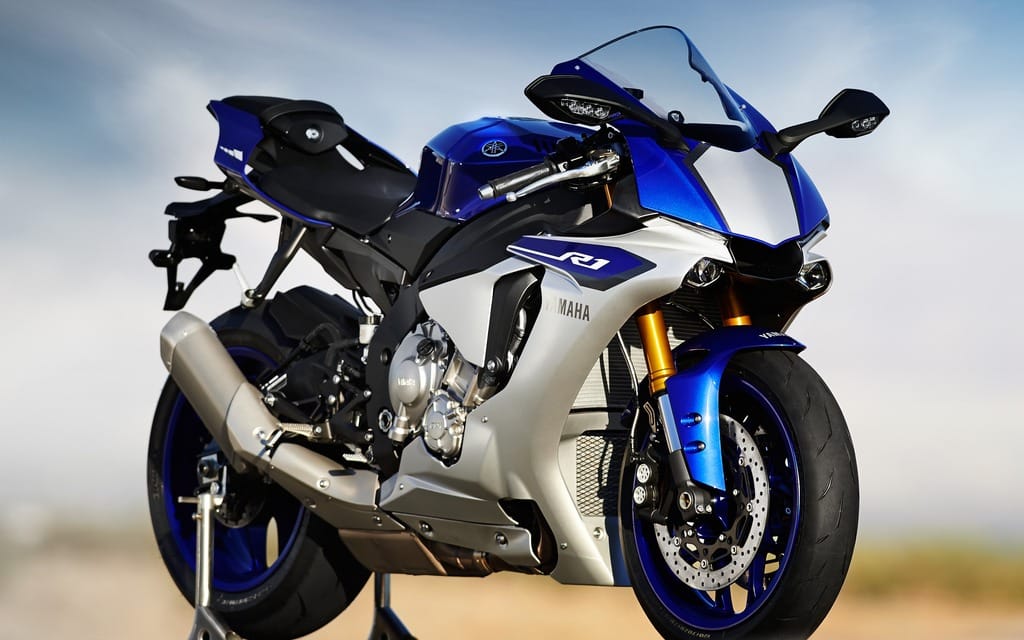 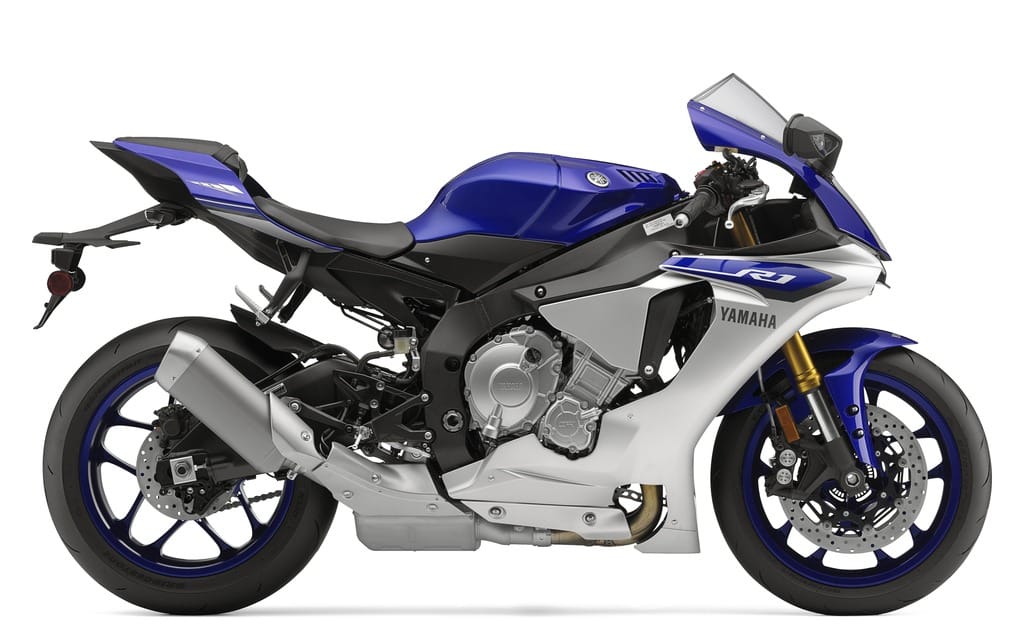 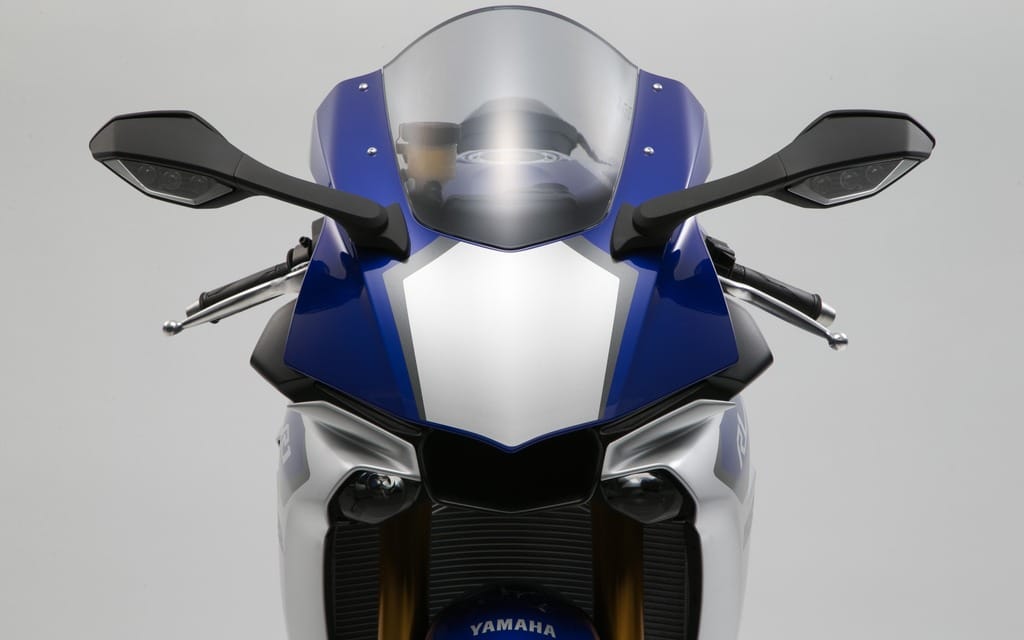 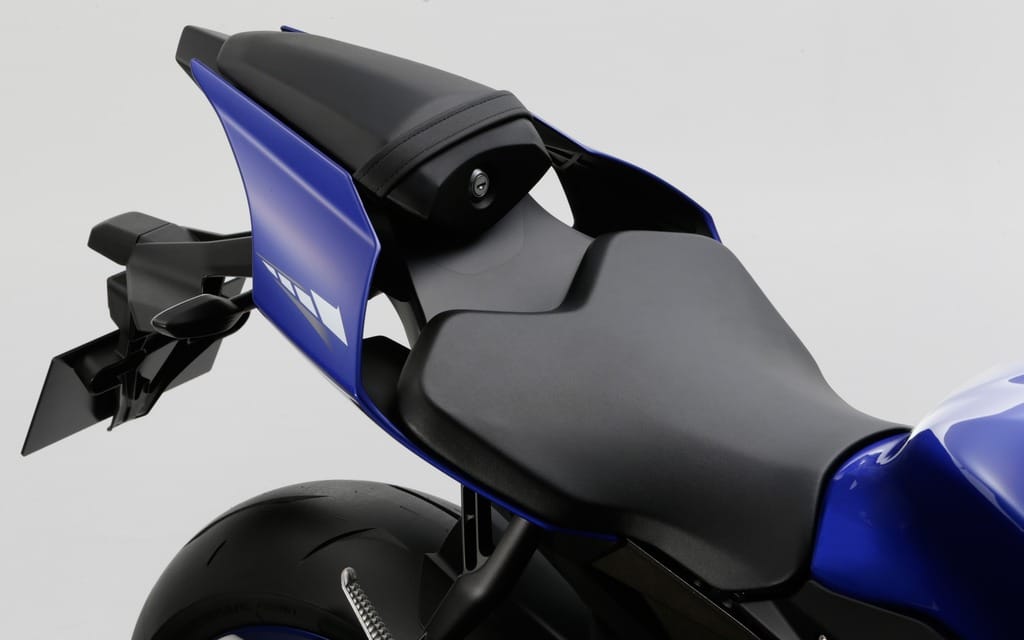 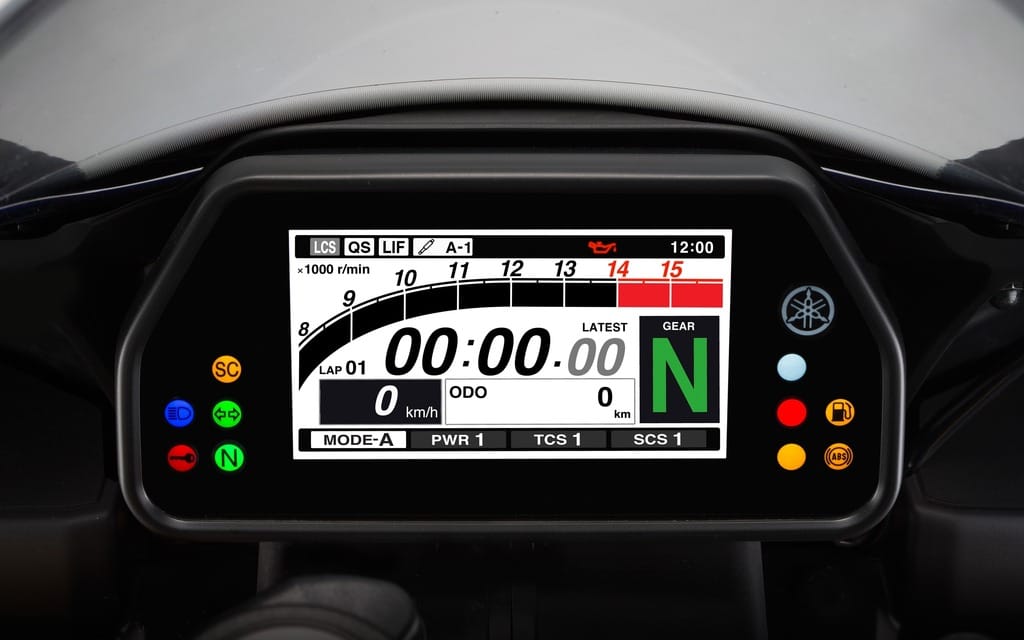 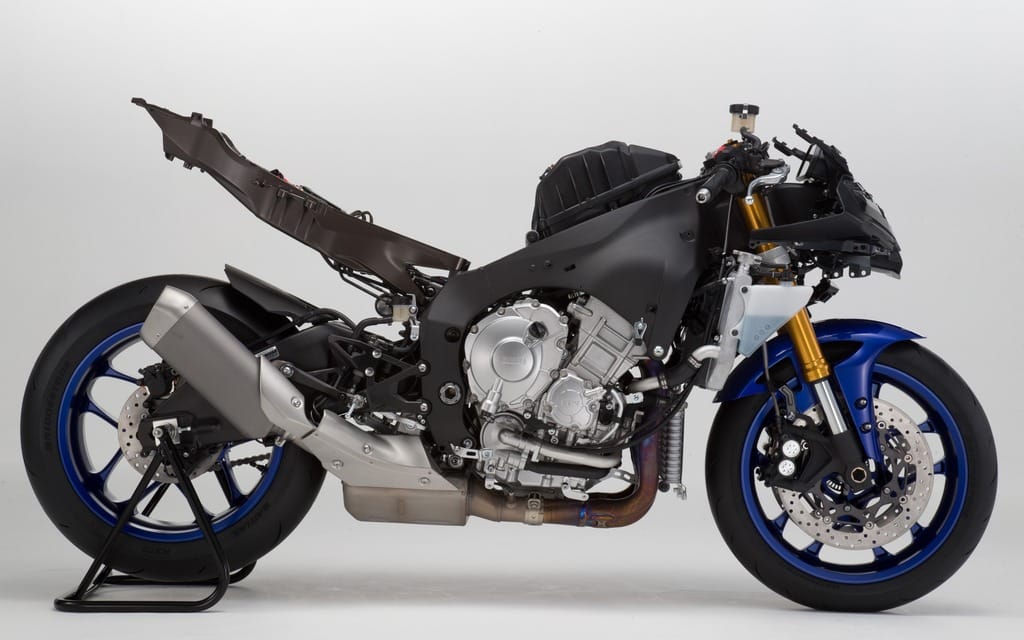 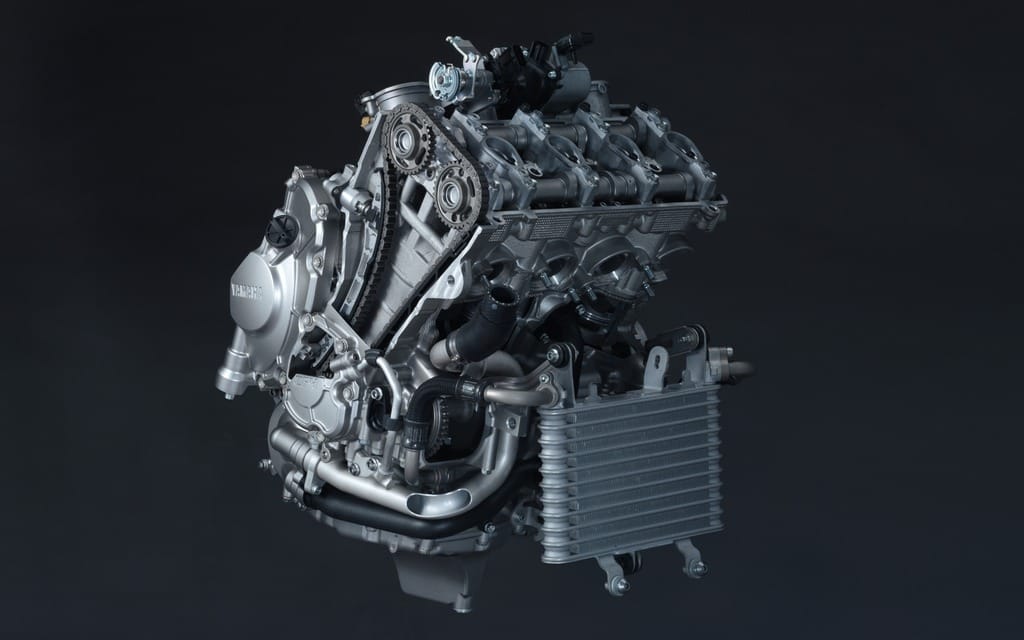 Yamaha R1 – Out of sight

It isn’t the R1’s speed and power that impresses. It’s the ease with which it inspires, and takes you to a better place
The front wheel of the R1 skitters across the crest of right-handed Turn 16 at Calabogie racetrack, but I do not back out of the throttle. I do, however, secrete a high-pitched squeal, like the sound that comes out of a balloon if its neck is pulled taut. That’s just fear talking, I think, before heeling the R1 over hard to the left. Then hard on the brakes and a right, followed by a right, and then another right. I’m almost there. All that remains is a left and a full-throttle burst down the straightaway. At the finish line I stab the button on the R1 that trips the timer and then look down at the on-board lap timer. Two minutes, 12.8 seconds. Wow.

Men with surnames like Szoke and Christie have done two-minute-flat laps at Calabogie. I don’t know how, exactly, they do it. Is there a shortcut through the woods? Do they find a crease in time that allows them to progress when the clock that rules the rest of us pauses? For the sake of argument, let’s just say they’re talented.

Calabogie is the most challenging racetrack in the world. (The Isle of Man is, undoubtedly, the most challenging circuit, but it’s not a racetrack. At Calabogie a crash will send you across a thin strip of grass and then you’ll hit either a rock-hard strip of Armco or a rock-hard rock—plenty of rocks up there. If you crash at the Isle of Man you’ll likely die because you’ve crashed into a pub.)

After years of sporadic attendance at Calabogie, I feel I’ve got the place figured out. And the reason is simple. Now I’ve raced there. A track day isn’t the same. To understand a track you need to bear down on it and lower that lap time with the ferocity of a caveman sucking meat from a bone. The trouble with track days is that you’re not supposed to run into people or jam your front wheel beneath fellow riders at the apex or otherwise do anything that will prevent them from having a pleasant time. A track day is fun. Racing is not fun. The fun comes at the end, after you’ve apologized to the man you nearly clipped while passing on the brakes and after that idiot that nearly clipped you while passing on the brakes has stumbled over to your pit and offered his hand in apology. (Of course in racing apologies are not to be trusted, because they’d repeat the same thing in a heartbeat.)

At the beginning of the summer I spent four days at Calabogie when the Vintage Road Racing Association’s period four class was included as a support class at the season-opening CSBK round. The first day was a Pro 6-hosted track day. The second day was a CSBK test day. Then we qualified on Saturday. And then we raced on Sunday. That’s a long time to be at a racetrack living out of a VW bus. Aside from the discomfort of a thin mattress and mosquitos the size of wasps, it’s where I finally learned the track.

Learning a track well enough to race on it means making yourself uncomfortable. Without hardly realizing it we come up with braking points and turning points and lines through corners that may be, upon reflection, nonsensical. (Calabogie’s Turn 8, a nasty hook of a thing called Temptation, is a big bowl with a kink at the end that doubles back on itself. It’s as ugly as my ugliest arthritic finger. The easy way—the fun way—to get through Temptation is to do so in a looping arc, like an arm-in-arm couple would do while rounding the end of a public skating rink. But that’s not fast. The fast way is to split the corner in two, and enter it like you’ve no interest in exiting it. From the straightaway, ride deep and hard to the outer edge of the track, and then, just when you’re convinced that you’ve lost your way, swivel the head so far to the left that if you dropped your chin it’d plunk down neatly between the shoulder blades. Then turn the bike, hold your breath, pray the tires hold, and hope that you don’t clip the grass on the exit. That’s not fun. But that’s racing.)

On my 99 horsepower Pro-6-dyno-verified Ducati 888 I put my time in, learned the track, refined my learning of the track, and put together a lap time good enough for pole position—and that pole position lap was over seven seconds slower than what I’d just done on my sixth or seventh lap on the R1. And, other than for a sticky set of Dunlop slicks, the R1 is as it rolled off the showroom floor. And here’s another interesting point. I went much faster and—even with that hiccup at the crest of Turn 16—was much more relaxed on the R1 than on my Ducati. How can that be?

The Ducati is a wonderful thing. The air intake is nothing more sophisticated than a sewer grate beneath the fuel tank. At full throttle it creates a vortex as deafening as the water intake at the Hoover Dam. (I’m surprised the Ducati hasn’t sucked the fuel tank off its moorings.) At the other end, the exhaust bellows with unrestrained fury, and, as the rider, you’re stuck in the middle of a very loud argument between the air whooshing in and the exhaust whooshing out. Yes, it’s wonderful. And fast for its age. But not fast like the R1. And not easy to ride, like the R1.

A surprising number of motorcyclists have fallen prey to a disturbing sentiment that’s making the rounds. These superbikes, they say, have too much power. No, no, no. That’s exactly what old men have said about motorcycles as illustrious as the Vincent Black Shadow and Kawasaki Z1 and my old Ducati. (Young enthusiasts of the day, of course, not knowing any better, just went ahead and had a grand old time while the old men pounded their fists and said that—in the case of the Vincent—50 horsepower was just too much. Funnily enough, 50 horsepower is too much for the Vincent’s terrible handling and weedy brakes. Vincents are undeniably pretty, but they’re better as objects for rich old men to treat as unhealthy fetishes than they are to be ridden.)

What’s been lost in the discussion of the modern superbike is that the throttle is a rheostat. And what a lovely rheostat the R1 has. Even though the track at Calabogie is dry, I start the day in rain mode. Just to work up to it. By the second session I’m in full power and have reduced the traction control intervention to where I can just feel the back slide under a big mitt of throttle. (Too much sliding and I make that horrible high-pitched sound, too little and I don’t feel like I’m working the horse hard enough.) And though the R1 has another motorcycle’s worth of horsepower on top of what my Ducati has, the delivery of the power can be modulated as delicately as a fine string player does vibrato.

If your intention is to win the coffee-shop grand prix then buy the R1M, but don’t underestimate the worth of the good old R1. Lower lap times are a barometer of a rider’s comfort level, and the R1—with the exception of Aprilia’s RSV4—is the superbike that most gives me the confidence to whittle away at those lap times. And while it doesn’t have the Ducati’s racket—mercifully—it, again, only ranks behind the Aprilia in the aural delight it offers. With the onward progression of technology, we’re perpetually at the apex of what a motorcycle can do for us. Part of the joy of racing an old motorcycle is the appreciation it gives me for this R1. I’m smitten, and I’m sure that if you rode it, you’d be too.