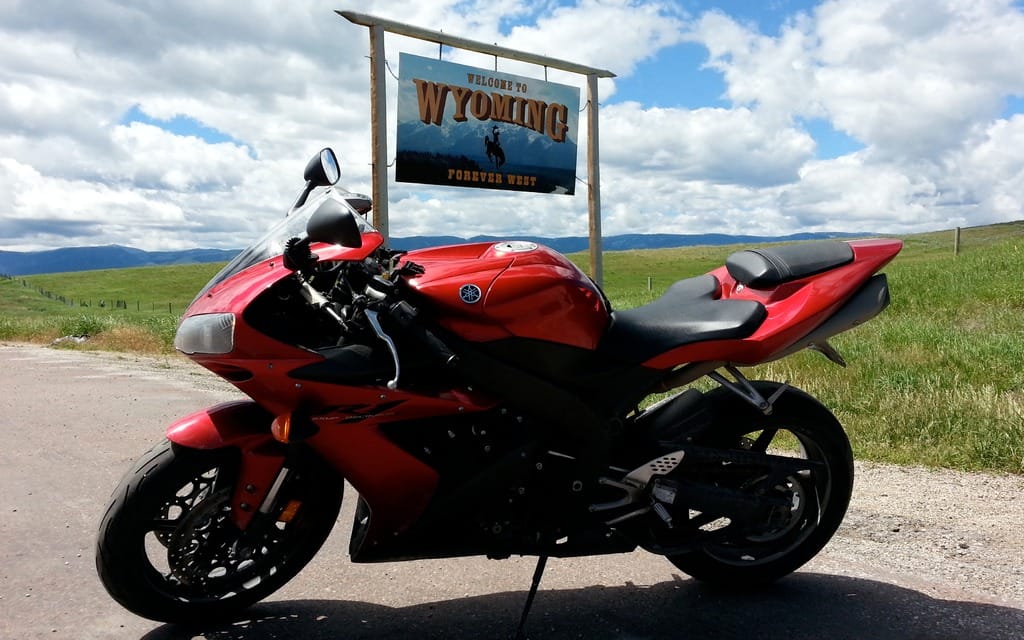 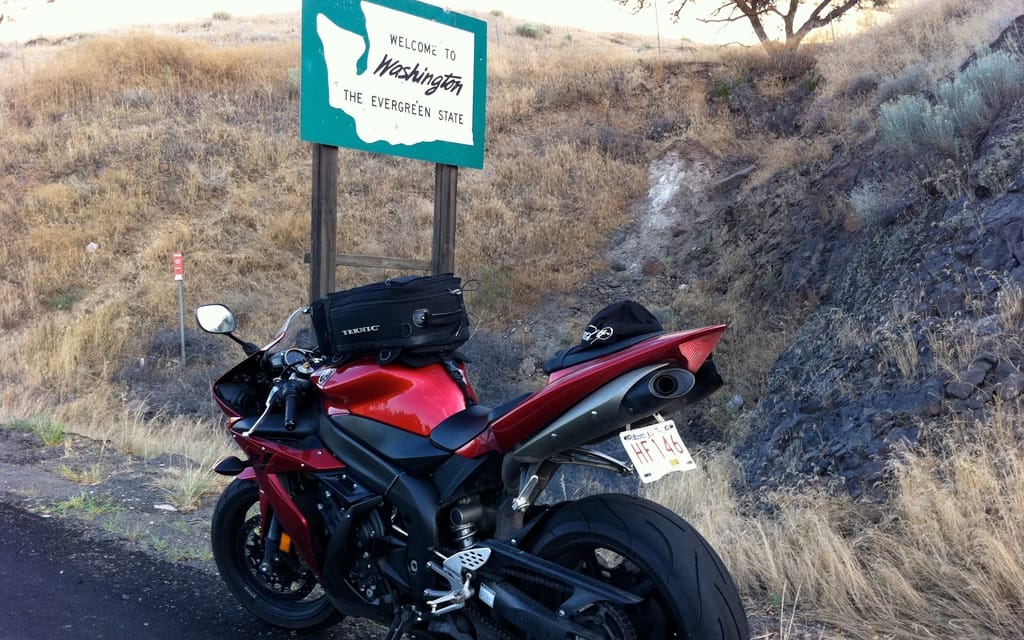 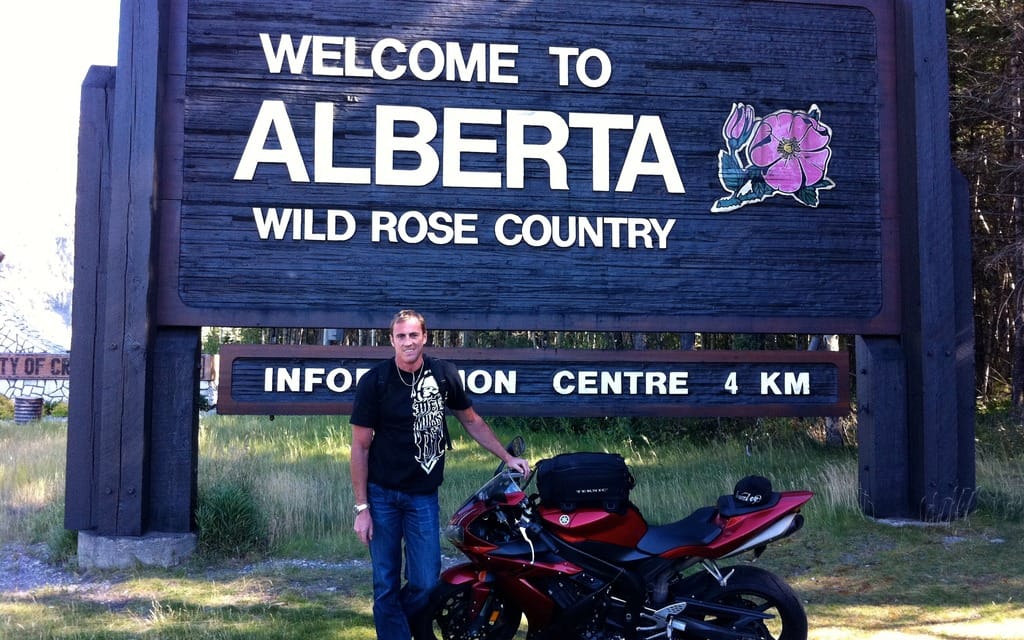 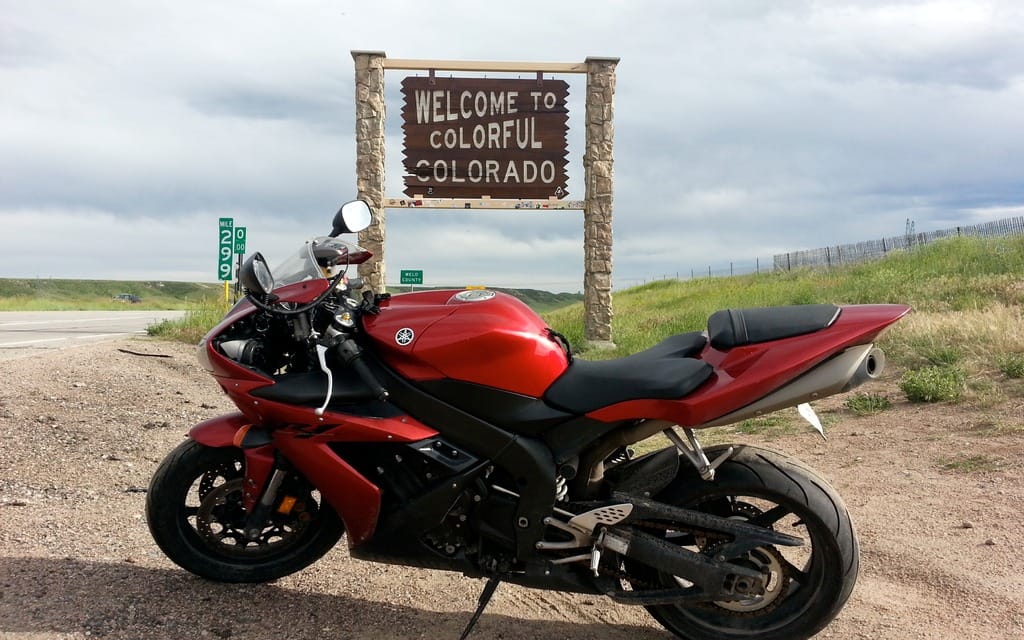 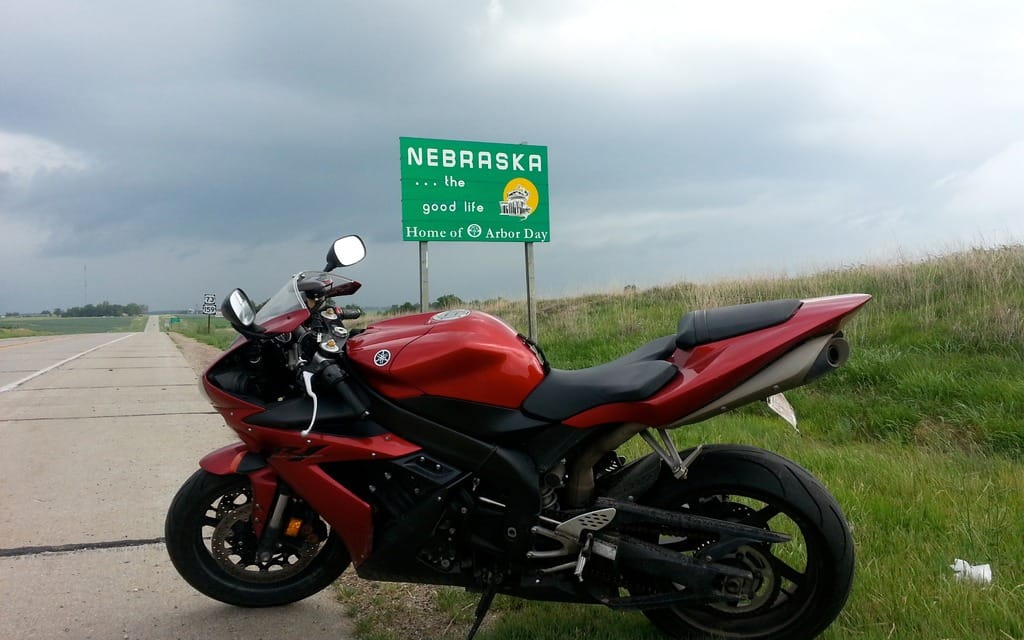 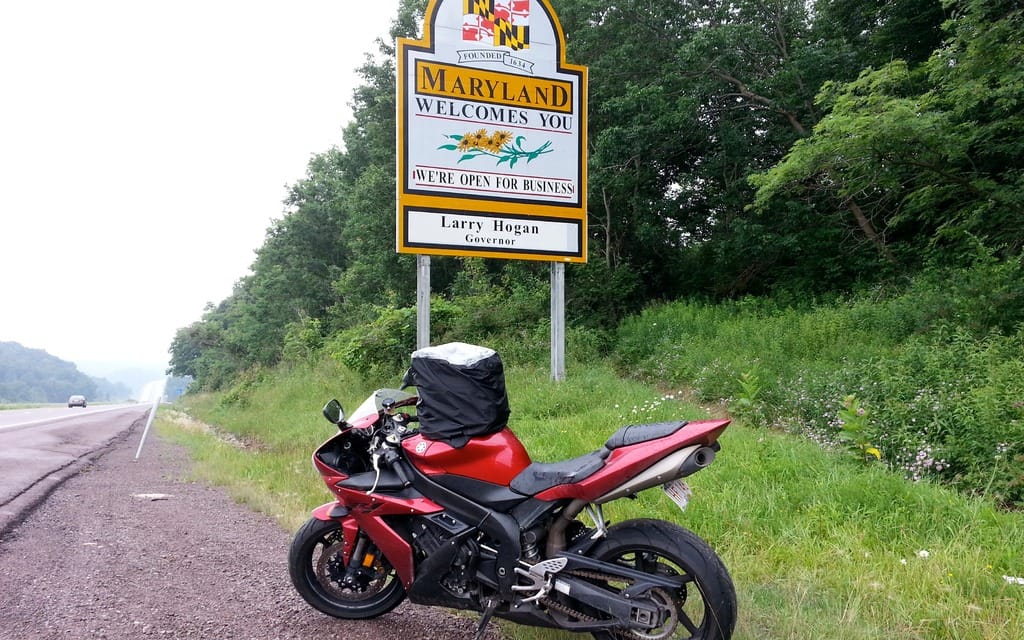 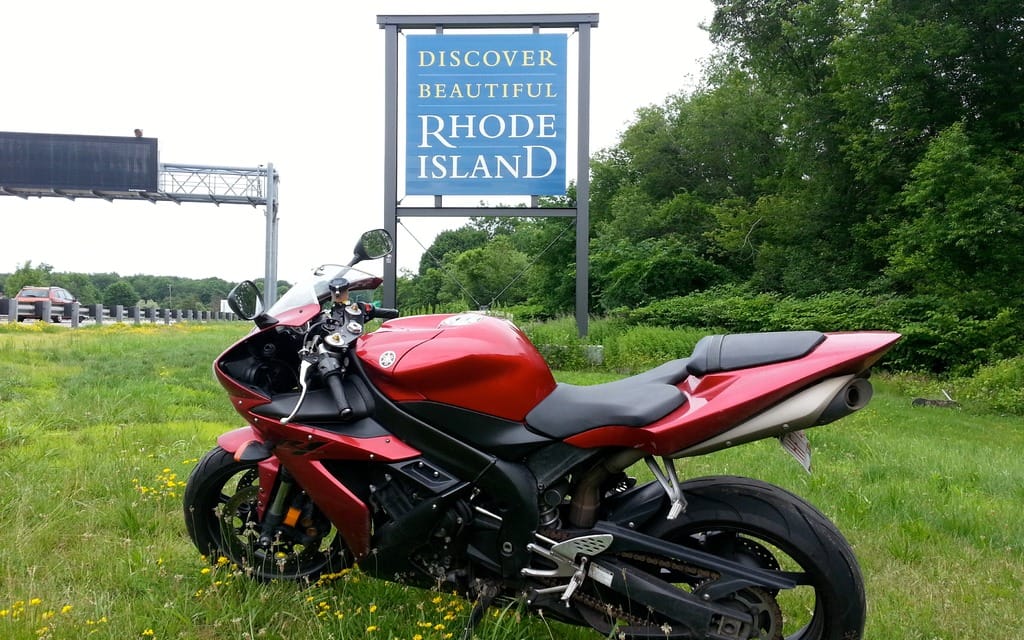 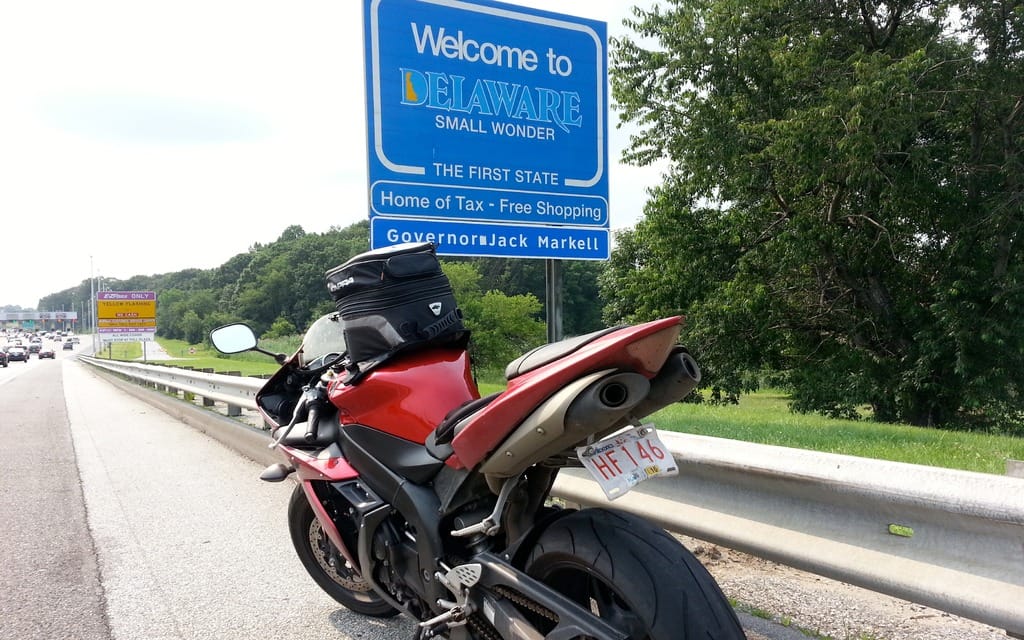 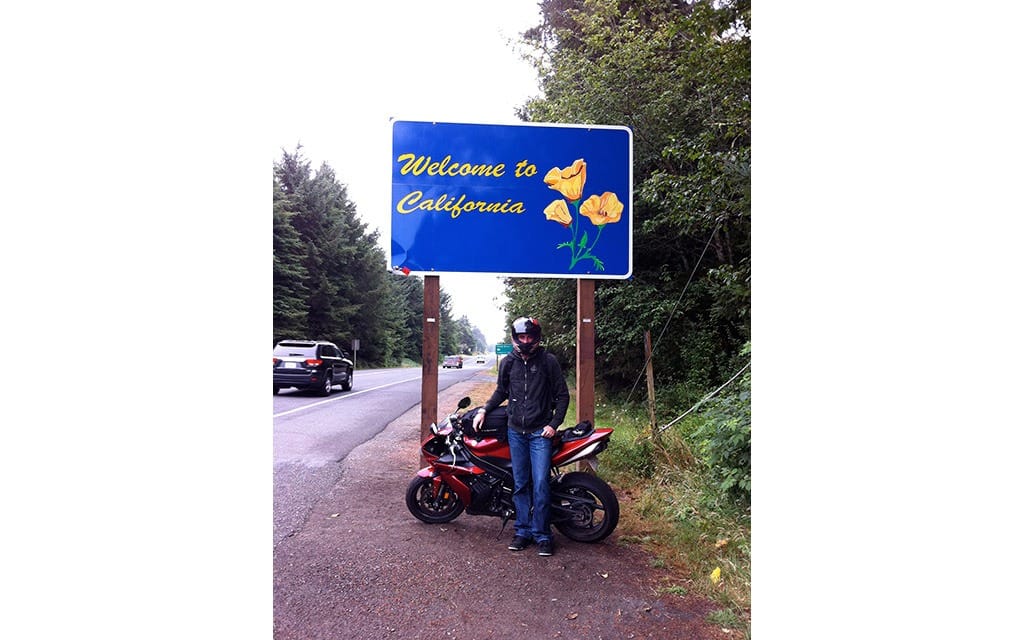 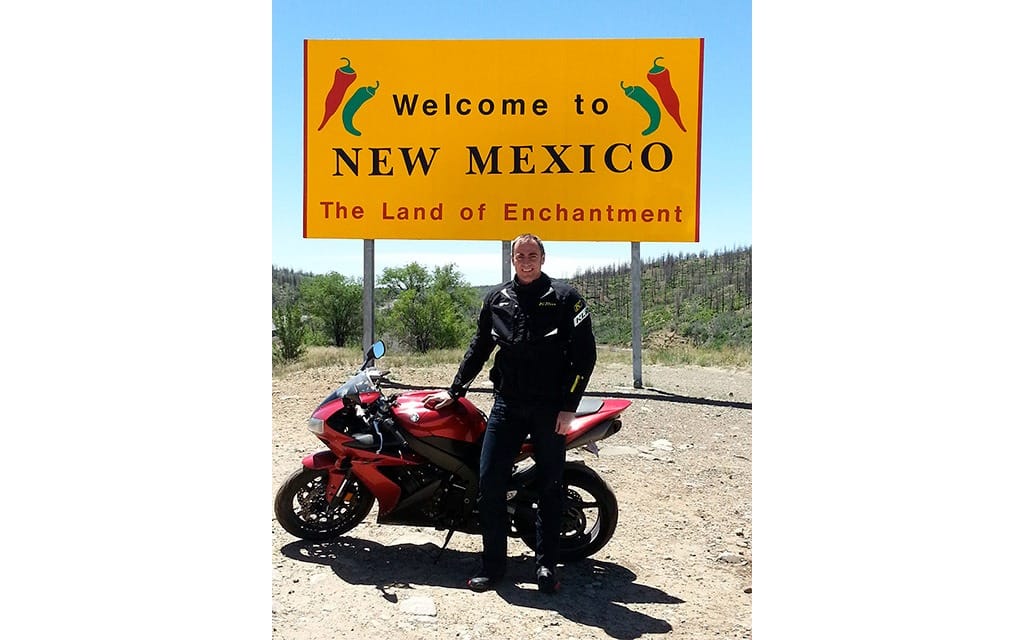 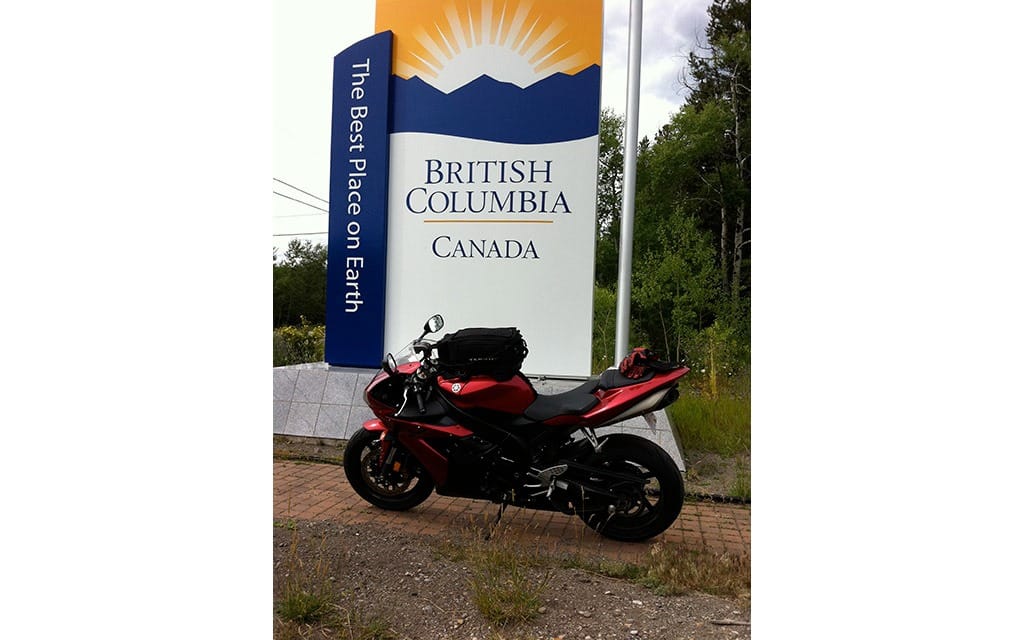 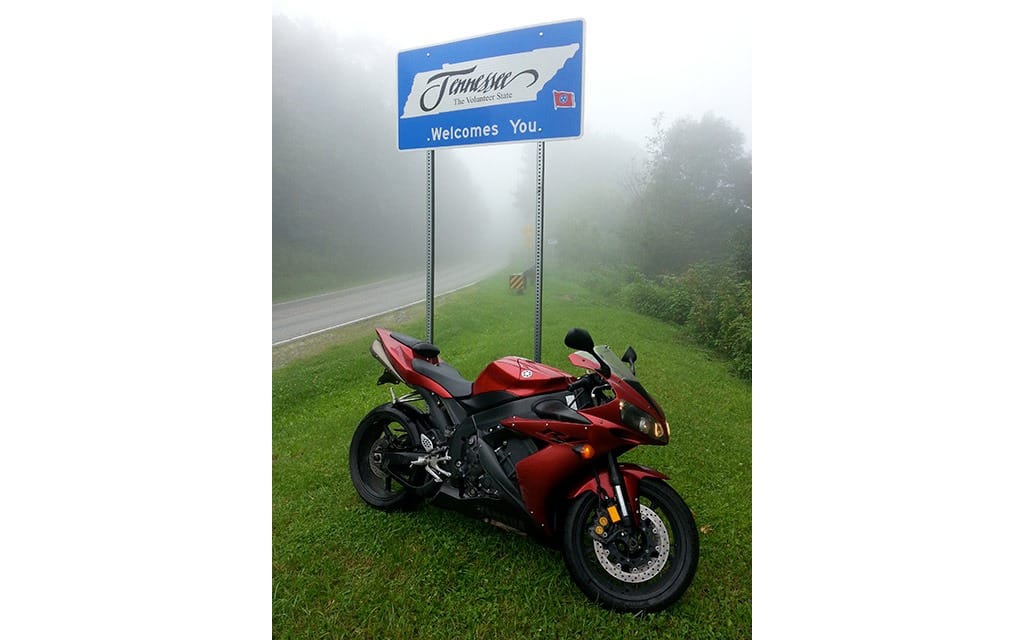 Beware of maps and to-do lists. They can take over your life
By Jeff Butlin

It all started four years ago when I decided to do a little road trip on my 2004 Yamaha R1. But where to go? Being from Calgary, it’s a fairly easy ride to get to the coast. As I got to the border of Alberta and British Columbia I stopped and took a photograph of my bike with the sign that welcomed me to B.C. It was the first of many to come.

The next sign read Welcome to Idaho. My first state sign. After a picture I was off. My next stop would be the coast. I rode south along 95 toward Lewiston, Idaho. One of the most memorable roads I’ve ridden—fresh pavement, golden wheat, and perfect weather. Hit the Washington border for my second picture. I’d rigged up a radar detector using the headphone jack and a splitter cable so that it would cut my iPod when it picked up a signal. But it doesn’t work if the police wait until they see you to turn their radar on. “Those things don’t work,” said the cop. “No shit,” I said. Oh well, off to Portland, and a date with the Oregon sign.

The next few days I spent riding down the 101 from Newport, Oregon, to San Francisco. An amazing ride along the Pacific Ocean and through gigantic redwood trees. At the California border I was able to get a picture of me and the R1 and a state sign. A couple had pulled over to do the same thing, so I asked them if they could take the picture for me. Then it was south to Los Angeles, and east to Las Vegas. I’d been fortunate with the weather so far, but as I crossed into Nevada it looked as though my luck was about to change. The rain held off, and as I came up and over a hill on Interstate 15, I saw Vegas in the distance. I spent a few nights in Vegas, and even attempted a ride during the day when it was 45 degrees. Ridiculous.

After Vegas, my plan was to just clip the corner of Arizona to capture my picture. Unfortunately, I missed it—on both the entrance to the state and the exit. By the time I realized it, I couldn’t figure out how to get back around to get Arizona. I was hot and tired, so I gave up on it and figured I’d be back on another trip. I rode back into Alberta—6,980 kilometres later—with photographs of two provincial signs and seven state signs.

And then years passed. It was now 2014. I was just about to transition into working for a new company, so I planned to take a week between jobs to do another trip. This was a whirlwind. My goal was to reach Louisiana. I left with just a tank bag full of clothes, and sure enough, it started to rain 10 minutes outside Calgary. I had rain gear, but realized in Billings, Montana, that my tank bag was not waterproof. I laid out all my clothes to dry and used the hotel hair dryer on my boots. Then it was through Colorado and New Mexico and Texas and my intended destination of Shreveport, Louisiana. But no time to rest, and the next morning I started working my way home. I’d planned to weave my way along the borders of the mid-central states Arkansas, Oklahoma, Missouri, Kansas, Nebraska, Iowa, and South Dakota. I decided to go a little out of the way to hit Minnesota and then headed home through North Dakota and Saskatchewan. My second trip had accomplished much, but many states remained.

On my third trip I’d have to reach all the eastern states. This trip would take a little more planning, as I’d need new tires and an oil change halfway through. On top of that, there were things I wanted to see and do along the way. I made day one more difficult than it should have been as I rode 40 miles too far south into Montana. After backtracking, I headed east for Williston, North Dakota, where I spent the night. Then the next night in Minneapolis before moving on to Wisconsin and Chicago. I knew there would be a few states that I would barely ride through on this trip, much like Arizona on the first one. Oh, and speaking of Arizona, I’d planned to get that picture on this trip. I left Chicago, and rode along the southern shore of Lake Michigan, so I could hit Michigan and then head south. I captured pictures of both Indiana and Michigan just outside Michigan City. Then it was off to Cincinnati. I wanted to hit Kentucky and West Virginia before heading northeast so I wouldn’t have to get to those states later in the trip. Getting the Kentucky sign would be a bit of an adventure as Kentucky and Ohio are separated by the Ohio River.

After that, I cut through the northwest corner of Maryland and made my way into Pennsylvania for the night, staying outside Harrisburg. On my way to New York I didn’t realize I’d cross into New Jersey. I bypassed the Connecticut sign (bad spot for a photo) but clicked Rhode Island, Massachusetts, New Hampshire and Maine. (I just nicked Maine, but it was beautiful—I’ll be back someday.)

I was headed down to Delaware. I planned on staying with my cousin in Rehoboth Beach for a few days, which would allow for new tires and an oil change. Passing through the New York City area was miserable—too much congestion. Then onto the madness that is the New Jersey turnpike, where everyone drives at unbelievable speeds. I had emailed Speedwerks in Dover, Delaware, before leaving on my trip, and had arranged for tires and an oil change. They were very accommodating. I was rested up and cut across to Washington D.C., saw the White House, then it was Virginia, North Carolina, and South Carolina in quick succession. I overnighted in Myrtle Beach and then rode down to Florida.

Waking up early to beat the heat, I started heading toward the tail of the dragon. It’d be a long day, but I had to get there. I rode north to Asheville, Tennessee, and then west. I arrived in Tapoco, Tennessee, just minutes from the dragon but I was too tired from riding and stopped for the night. I set my alarm for 6:30 am. I was hoping to beat any traffic. That turned out to be a great decision. I was on the road by 7 a.m. and snapped the photo of the Tennessee sign along the way. The road itself was a little damp, which was probably a blessing in disguise, because were it dry I’d likely have pushed too hard. The dragon was everything I’d imagined. Everyone should do it.

Then it was on to Memphis. Not being an Elvis fan, I skipped Graceland. But I needed Mississippi. Once photographed, I had a moment of satisfaction: I’d hit every state in the lower 48 except one—Arizona. If you look at a map and plot Memphis, Tennessee, and Calgary, Alberta, Arizona is nowhere between them. Extra riding was called for but I was determined to complete my collection of photographs. The next few days would be spent riding interstate 40 to Arizona. Along the way I got a nail in my new back tire, which necessitated a replacement. I stayed the night outside Albuquerque, New Mexico, then, the next day, clipped Arizona for my final photograph.

The remainder of the journey was just getting home. My final day would be a 1,500-kilometre slog from Provo, Utah, to Calgary. I didn’t feel like staying another night in a hotel, so I pushed it hard. Next up? An R1M and all 48 states in one trip? Who’d bet against me?