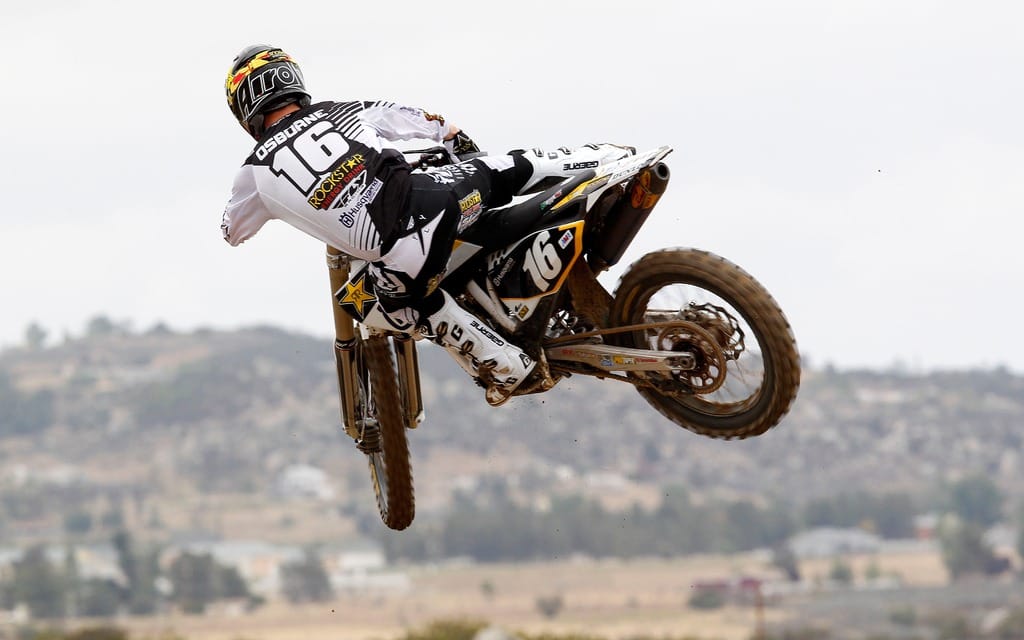 We see them on race day, but what do pro motocrossers do the rest of the time?

It’s two days before the AMA pro motocross round at California’s Glen Helen, but by the way the Husqvarna racing team riders prepare for a few practice laps at Cahuilla Creek motocross track, you’d think it was two weeks. They’re relaxed, lounging in folding chairs, cracking jokes and cackling as mechanics make adjustments to 250s and 450s. They complain of the cold — a bone-chilling (for southern California) eight degrees — as they don gear. Once on track, they make manoeuvres that would land me in the hospital look lackadaisical, whipping bikes sideways when they get big air, or surfing rear tires along the brinks of berms. And when they return to the pit, they’ve barely broken a sweat.

According to Husky’s Zach Osborne, a 25-year-old Virginia native who turned pro in 2006, “On Monday we do cross training: cycling, running, and gym. Tuesday is moto-oriented, a full day on the motorcycle. Wednesday is a shorter day, a sprint day — starts, sections, that sort of thing. Thursday is super short, if we ride at all. We usually start to taper after Wednesday down into the race, so Thursday is just to work out any kinks. We try to fly out Thursday evening. Friday is completely relaxed, a rest day. Saturday is race day, and either Saturday night or Sunday we come home and start over.”

Many top motocrossers compete in both the supercross series, which makes stops at stadiums in the winter and spring, and this, the outdoor motocross series, which runs in the spring and summer. “It’s not like cycling or some other sport where you have to be good for one three-week period, or one-week period, or weekend,” Osborne says. “You’re expected to be on point from the first supercross race until the last outdoor race — basically nine whole months. And it’s not like leading up to that we’re chilling on the couch. It’s a grind, all the time. There’s not really any time for rest.” There’s even less time when, like Osborne, you represent your country in the International Six Days Enduro. “The last two years I’ve done the ISDE in between. It’s been crazy how hectic it’s been. I said no this year because the last two years I haven’t taken any proper time off.”

Such a busy schedule takes a heavy toll, and being overtaxed can have huge consequences. “In cycling or running or some other endurance sports, there’s not really a lot of risk if you’re tired,” Osborne says. “When you get on the motorcycle there’s any risk you can think of. If you’re out there and you’re tired, dilly-dallying around, you’re going to have a crash. It’s a delicate mix of going hard enough versus not hard enough, and leaving enough time for recovery. I’ve always leaned towards overtraining. I had some fitness issues when I first turned pro. Since then I’ve prided myself on going as hard as I can all the time. But in my old age, I’m leaning towards being more rested but well trained.”

Part of being rested, both physically and mentally, is getting away from motocross completely. How does he unwind? “I tried golf,” he says, “but I actually get more frustrated when I golf. For me it’s fishing, mostly fly-fishing.”

The scene in the Husqvarna paddock is very different during Saturday’s race at Glen Helen. While Osborne is still smiling as his mechanic preps his bike, the grin looks almost sinister. As he heads to the staging area I wish him good luck, and though he nods in response, I don’t think he’s actually heard me; his eyes see through me with focused intensity. In his head he’s already at the starting line — it’s race day, after all, what he’s worked all week for.