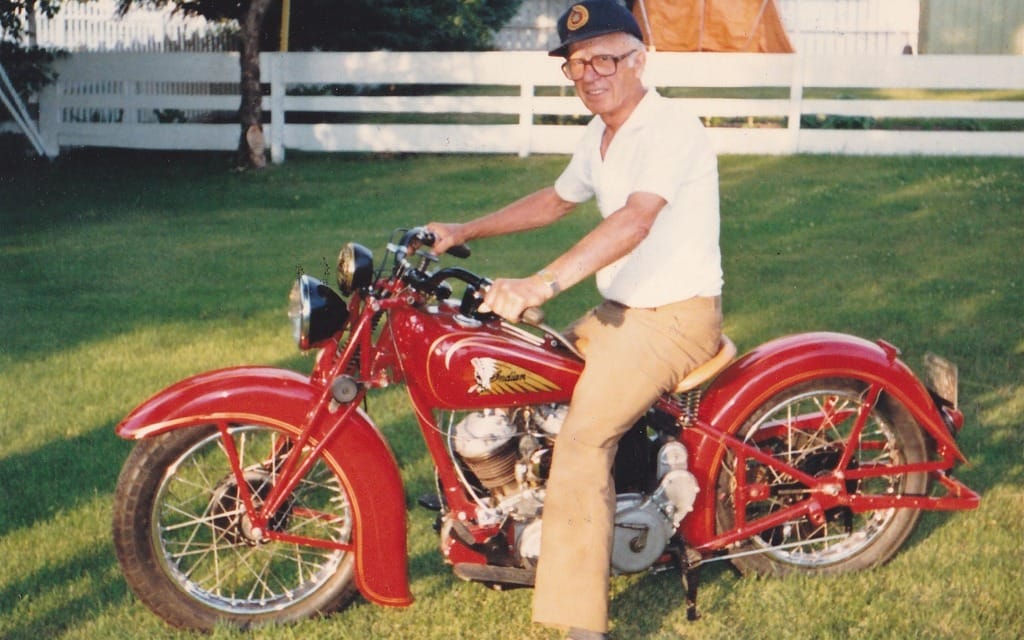 I went to Winnipeg in 1992 to visit my 81-year-old father, who’d ridden and raced Indian motorcycles on and off for 56 years. He rode his 1936 Sport Scout every day, everywhere — the man knew how to ride.

Dad was the secretary for the Manitoba Antique Motorcycle Club. At a meeting not long before my visit, members of the club told him you were required to have a motorcycle specific licence to operate a bike. Dad disagreed. “No, all you need is a driver’s licence.” That law changed in 1963, they said. A grandfather clause had been established so those who were already riding could get their motorcycle licence by filling out a form — no road test required. But the expiry date to fill out the form was the end of 1964. Dad had missed the cutoff by 28 years. I arrived in Winnipeg on a Sunday night and asked what was on the agenda. “I’m going to get my motorcycle licence,” he said.

We headed down to the motor vehicle department on Monday afternoon. Dad hopped onto his Indian and told me to follow him in the station wagon. Downtown traffic was heavy and I had a hard time keeping up. He had fought as a fighter pilot in World War II, flying Spitfires and Thunderbolts; he knew what speed was. I arrived — long after him — and parked beside the Indian. A youthful driver examiner came over. “That’s a beautiful motorcycle. Is it yours?” “No, it’s my dad’s. He’s inside getting his motorcycle licence.” We chatted for a while, and then I saw Dad emerging from the office. I looked at his face and laughed as I said, “You didn’t get it, did you?” “Those bastards don’t know anything,” he said. “Who do they think they are, giving a motorcycle test when they don’t know anything about motorcycles?”

Dad disliked Harleys, probably going back to the ’30s and ’40s when he raced against them. He once said to me, “The only parts of a Harley that are any good are the pistons — they make good shifter knobs for Indians.” (He actually melted down a Harley piston to make a gearshift knob for his 1919 Indian Powerplus.) One of the main differences between old Indians and Harleys is the location of the throttle; a Harley’s throttle is on the right and an Indian’s is on the left.

I asked Dad what happened at the motor vehicle office. “He asked me to show him how you signal for a left turn, a right turn, and for stopping. I showed him, and then he said that I was almost right, but that I used the wrong hand to signal. That’s when I told him that I rode an Indian — and not a damn Harley — and you can’t take your hand off the throttle to signal. I also told him he shouldn’t be giving anyone a motorcycle exam.”

The examiner who’d come over to admire the bike was still standing next to me. Overhearing all of this, he looked at me. “Do you have a motorcycle license?” I nodded. “You’ll have to ride the bike home,” he said. “Your dad doesn’t have a licence.” “Good luck telling him that,” I said. The examiner walked over to Dad while he was preparing to fire up the bike, put his hand on Dad’s shoulder, and broke the bad news. Dad turned his head and looked at him, but I didn’t hear what Dad said. The examiner straightened, then slowly backed away. Dad fired up the Indian with one kick and left in a cloud of dust.

“They drive behind you in a car, and when they want you to turn, they put their turn signal on,” he said. “But the guy had a hard time keeping up with me. I think he signaled left. But my mirrors shake a lot. I turned right and went home and had a cold beer.”

Dad never got his license, but kept riding his 1936 Indian until he had a stroke in 1997. He died two years later. I’ll never forget that day in the parking lot. That examiner likely won’t, either.