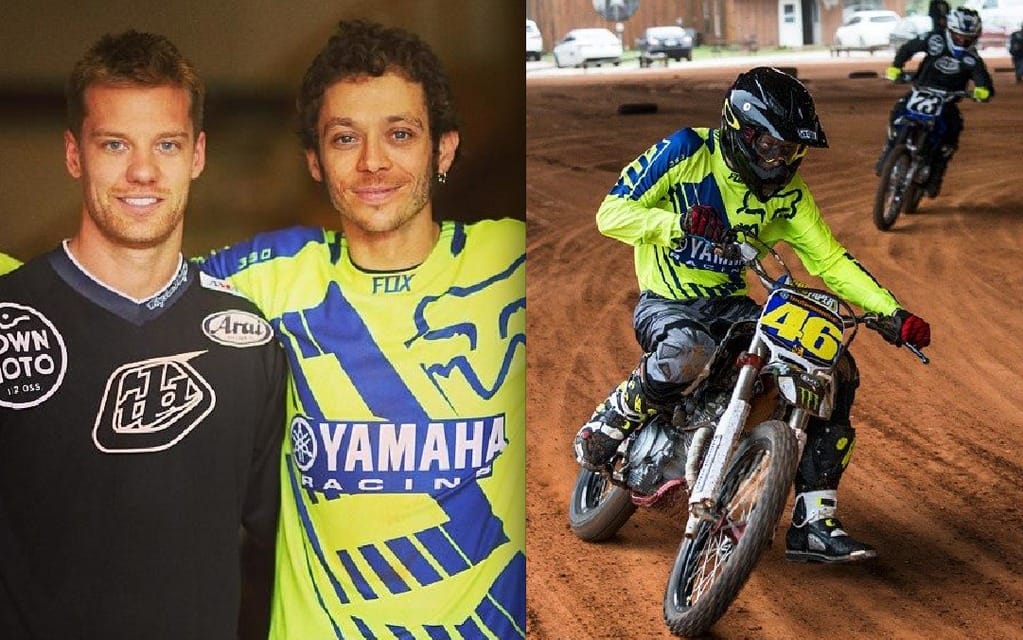 Do you want to come to Texas? That’s what the text message read that led to Canadian flat tracker Doug Lawrence spending a day riding with the world’s most famous motorcycle racer. Lawrence is a frequent guest instructor at Colin Edwards’s Texas Tornado Boot Camp, a dirt-track-centric riding school that promotes wholesome American values, like the firing of high-powered guns during the lunch break.

Edwards, now retired, is a two-time World Superbike champion who partnered with Rossi on Yamaha’s MotoGP team, and the two have remained close. Finding time for Rossi to visit the camp proved elusive, however, until this year. The week following Rossi’s third-place finish at the MotoGP round at Austin’s Circuit of the Americas (and just a few days before Rossi would deposit Marc Marquez on his ass on the way to a win in Argentina) the superstar made his way to Edwards’s facility north of Houston.

It was “hush-hush” says Lawrence, a low-key get-together of Edwards, Rossi, and a few special guests, including two-time AMA Grand National flat track champion Jake Johnson. Lawrence confesses to a limited understanding of Italian. “I understood ‘ciao,’” he says. “And then Rossi gave me a ‘bro’ handshake, which is not the kind you and I would give each other. And he was surprised to learn that motorcycle racers come from Canada.” But what’s he like as a rider? “He’s always watching you,” says Lawrence, “even while we were on the track, his head is swivelling around to see what you’re doing.”

Flat track is a peculiar discipline, its seeming simplicity hiding a world of complexity. There’s virtually no traction, and top riders like Lawrence and Johnson try to keep the wheels in line to maintain forward motion. Not Rossi. He was all throttle, and, oddly, he didn’t want to wear a steel shoe and went better clockwise than counter-clockwise. Must be a European thing.

For a man with an annual income north of $20 million in the midst of back-to-back MotoGP races, a fair degree of restraint might have been sensible, Lawrence thought. But no. Rossi rode flat out. He was just a guy on a bike having a hell of a time. They were all having a hell of a time. And then it was over, but not before the boys sat around, not saying much, just taking it all in. Rossi, despite the fame, despite the fortune, was one of the boys. And then a hug from the man himself to end the day. “It’ll never happen again,” says Lawrence.