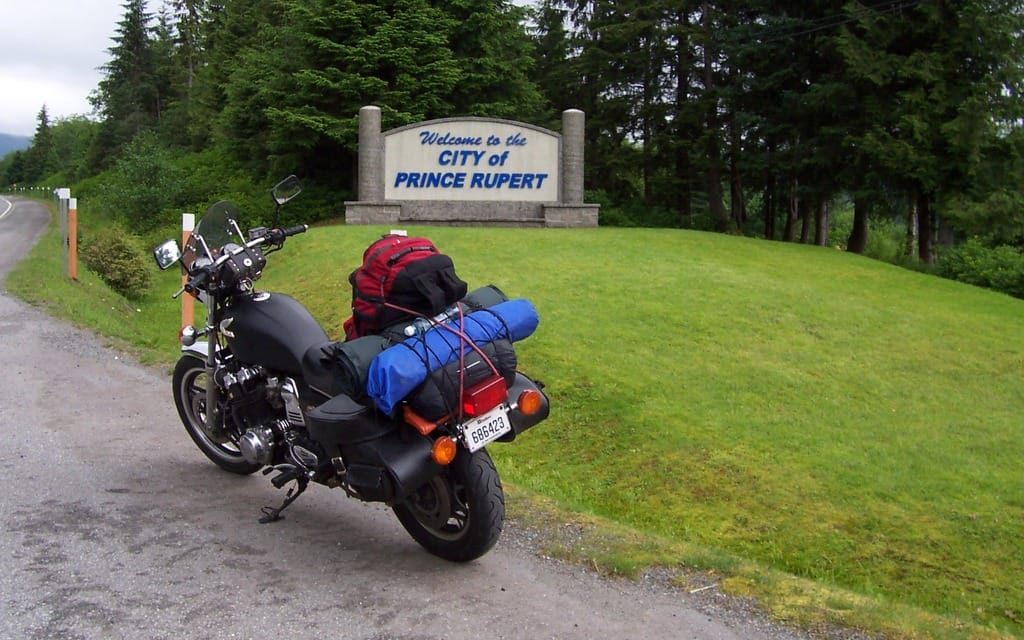 On April 17, 2008, my friend and I left Rawdon, Quebec, and headed to British Columbia to work at a campground for the summer. I rode my ’82 CB900, while my friend followed with a car and trailer. We traveled through Ontario to Sault Ste-Marie, where we crossed into the United States. Because we were farther south, the weather finally got a little bit warmer than the chill I’d been riding in up until then. We headed west on Highway 2, which took us through Minnesota, North Dakota, and Montana. The last night before crossing back into Canada we stayed in a small motel near Glacier National Park.

I looked outside in the morning and remembered why we’d brought the trailer; there was at least 15 cm of snow on the ground. Though it seemed like a shame, the bike had to be trailered to our final destination: Birkenhead Lake Provincial Park in B.C. We got the park ready for the season and settled into our routine with a schedule of 20 days on, eight days off — plenty of time to explore B.C. by CB.

On my first break I set off for the Icefields Parkway between Banff and Jasper. I took Highway 99 north to Lillooet, B.C., and then the Trans-Canada to Lake Louise—a ride of about 600 km—where I camped for the night. It was a cool evening, but with a roaring campfire to fend off the worst of the chill, life was good.

The next morning I had to scrape frost from the seat and windshield (the temperature had dropped to five below while I slept). I headed north on Highway 93 towards Jasper. It was a beautiful sunny day, but the temperature only rose to five degrees. The scenery along the highway, with snow-capped mountains, glacier-fed lakes, and lots of wildlife, was spectacular. I spent some time at the Colombia Icefield where I took a bus tour of the Athabasca Glacier. As it was late when I arrived in Jasper, I decided to stay in a motel for the night. The next few days were spent discovering the town and its surroundings before heading back to Birkenhead.

Before I knew it I was off again, this time picking Prince Rupert as an end goal. The scenery on Highway 97 heading north to Prince George was so reminiscent of Highway 117 between Saint-Jovite and Rouyn-Noranda in Quebec that I started feeling homesick. From Prince George it was Highway 16 to Smithers, Terrace, and Prince Rupert—again, a beautiful highway, most of it freshly paved, with plenty of flowing curves following a river. Along the way I met a woman from Alberta riding an ST1300 and we rode together for two days to Prince Rupert. The next day she started back and I followed suit, riding with her to Terrace, where we parted ways, mine following Highway 37 to Kitimat.

Kitimat wasn’t just a spot on the map to me; my father emigrated from Greece in the early 1950s to work at the aluminum plant there, and I felt a need to go and see where he first discovered this great country. I rode around Kitimat for a while and went to the aluminum plant for a tour, though there was none because of renovations. Then I did what any sane man would: I stopped at a small pub to have a bite before heading back to Prince Rupert. From there I took the ferry to Port Hardy on Vancouver Island (a 16-hour float).

Once off the ferry I rode along the Island Highway all the way to Nanaimo, and then caught another ferry for a 90-minute ride to the mainland. After leaving Horseshoe Bay, I took Highway 99 north through Squamish, Whistler, Pemberton, and all the way to Birkenhead Provincial Park.

It was a short but sweet camp season in B.C., and in mid-September my friend and I headed back to Quebec. Although I’d been warned that riding through the prairies was mind numbing, I did it anyway (every rider should experience it at least once). I enjoyed the summer immensely and was so smitten with riding out west that I went back in 2009 and did it all over again — but that’s another story.