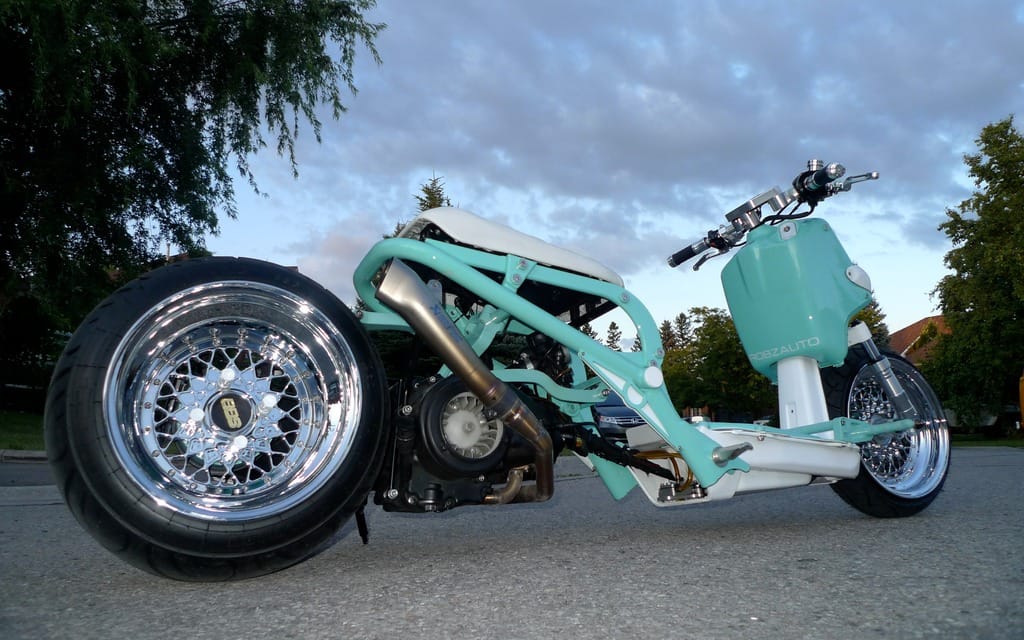 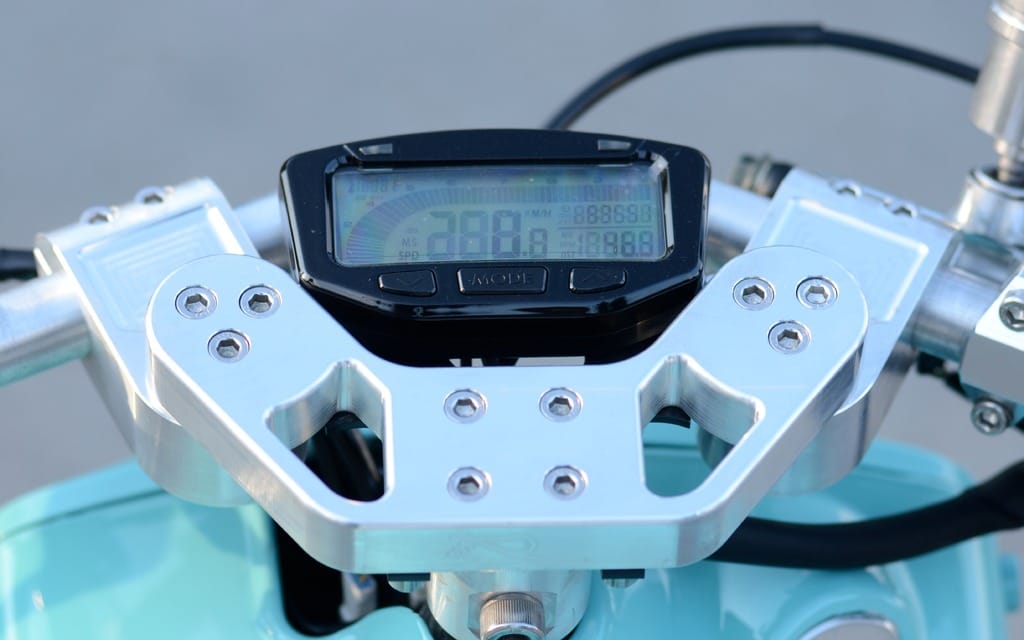 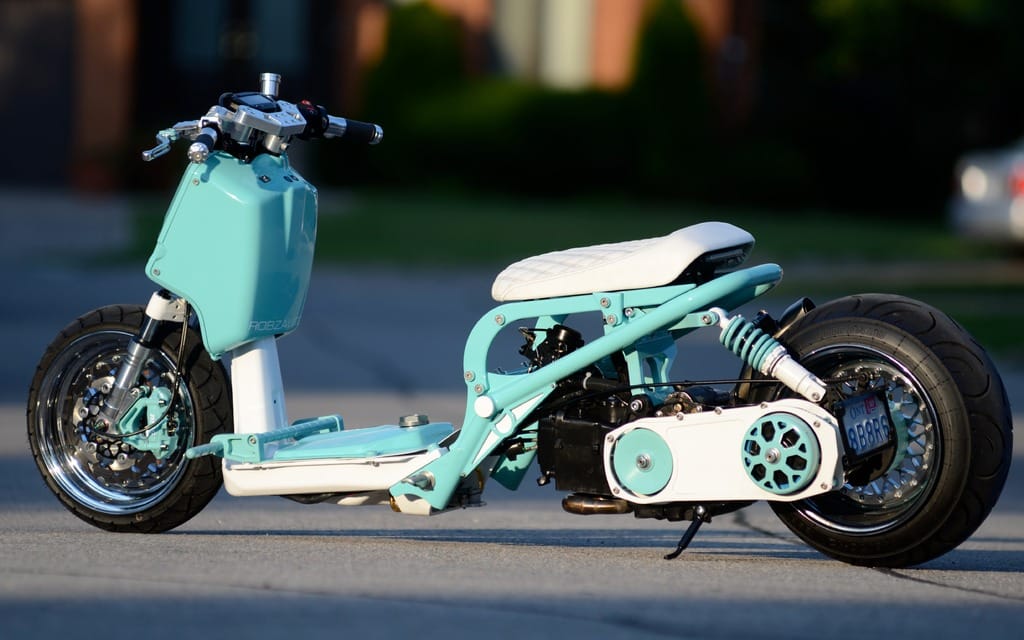 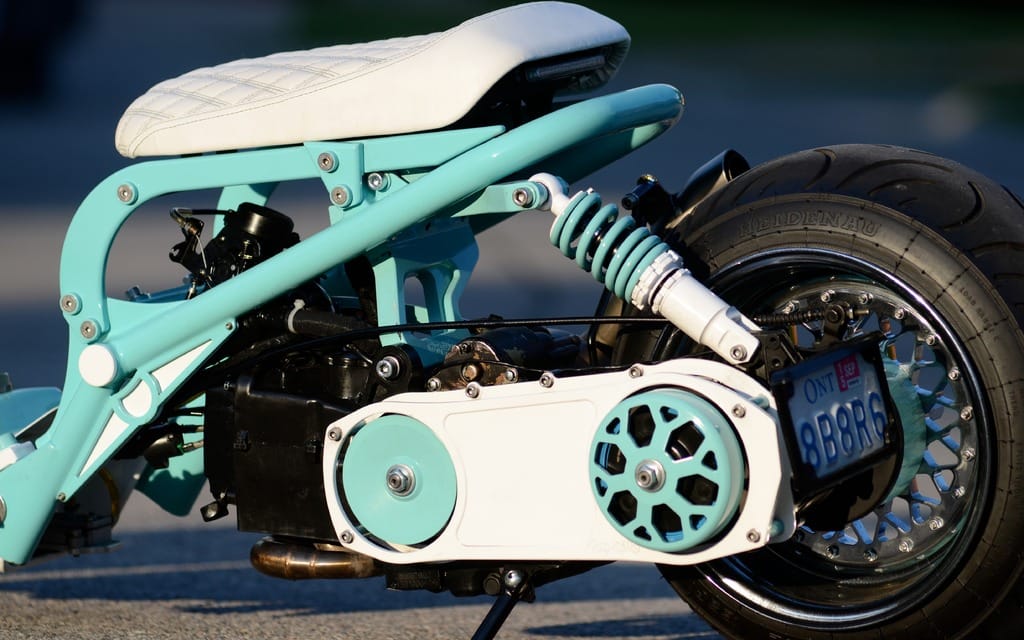 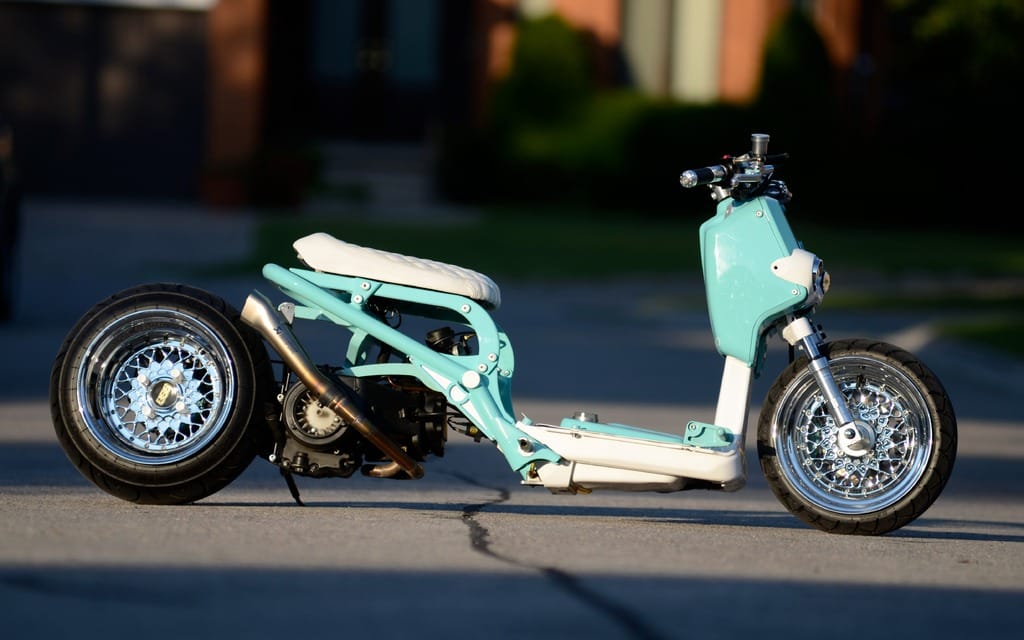 All he wanted was to see his Honda Ruckus in a magazine. Is that too much to ask?

Poor Benny Bisogno. The 30-year-old went through the effort (sort of) and expense (absolutely) to pimp-out his Honda Ruckus in the hopes of turning heads. And he succeeded. Whether or not you like the stretched and slammed look — or scooters themselves, for that matter — you can’t miss this machine. But you can misplace it. The Ruckus caught our attention at a bike show two years ago. We contacted Bisogno. He was keen. But spring came and the photo shoot was delayed. Finally, on a fine midsummer evening, we headed to Bisogno’s home north of Toronto. We chatted and took photographs. And that was pretty much it.

Blame a misplaced notebook. Blame a computer with too many poorly labeled folders (is it filed here, or there?). Blame content considerations (too much stretched-and-slammed in this issue, too much scooter in that issue). Blame us for the delay. Blame us for everything.

Benny Bisogno did not forget our visit. His prodding was as insistent as the buzz of a mosquito circling a tent. He’d text every few months, to check our progress. He was always polite, but with each “Not yet, Benny,” he grew increasingly despondent. His last text, before we told him that his Ruckus — finally — was going to be published, read: “It’s probly never going to happen, is it :(” But now it’s time, Benny Bisogno, to turn that frowny-faced emoticon upside down.

That gorgeous summer evening when we pulled into the suburban cul-de-sac to photograph the Ruckus, we immediately spotted it leaning on its sidestand. Bisogno’s parents were there too. So was his girlfriend, Erika, tiny dog in tow. But where’s Benny? “He’ll be right out,” his mother said. “He’s putting on a clean shirt.”

We considered the Ruckus while we waited. A stock one is low. This one is lower. Its palette of colors is pretty and its rims shiny. A far cry from what it looked like as a bone-stock 2005 model. A stock Ruckus has a utilitarian charm. Like a milk crate. “Hey guys, sorry to keep you waiting.” No worries, Benny. Nice shirt. How’s the bong business? A slow grin slides across his face. “It’s good, really fun.”

Bisogno owns Hitz Imports, a purveyor of bongs, pipes, papers and other smoking paraphernalia that we don’t know how to use. And yes, he does consume cannabis — but wait, conservative readers, before you write and claim that we’re promoting drug use: he has a medicinal licence to consume pot, and for good reason. In April 2009 he was involved in a hit-and-run accident on his Ducati 1098 — or, as he describes it in an email, “I was hit from behind and the person decided to leave lol.” The accident left him with chronic pain, and dope helps him cope (though he assures us he doesn’t mix marijuana and motorcycling). “I said after the accident I’d never get back on anything big again. Once I saw a Ruckus all done up, I decided to get one built.”

He did research and settled on RuckHouse, a shop specializing in Honda Ruckus custom parts and builds, located in Orlando, Florida. He bought a used Ruckus for $1,200, stripped it down and shipped it off in Rubbermaid containers. The initial budget was five or six grand, he says, though that number was exceeded quickly — and then substantially. A year later, his nearly unrecognizable Ruckus was shipped back to him on a flatbed.

The finished product is lowered, with an RRGS fork and ATR Low Down shock, and lengthened with a Composimo stretch kit. The 49 cc single was ported and polished, given bigger valves, and bored out to 171 cc. An unlimited CDI ignition, NGK coil, Makoa harness and performance clutch kit keep it hustling, with an Anklebiter open primary feeding power to the chunky 140/70 rear tire. Chromed rims are 12-inch FLP BBS units and cost a whopping $1,200. Disc brakes replace drums, and are also from FLP. The cross-stitched aftermarket seat sits in a Dorf seat frame, with an LED taillight/turn signal unit barely visible beneath. A PIAA headlight ensures he’s seen on the darkest city streets (if drivers glance down). Drag-style clip-ons are from Rucksters, controls are from billet, LCD is Trail Tech, and passenger pegs are Rizoma (for better ground clearance, Benny says). All told — parts, labour, and shipping — the build cost around $20,000. Or about the same as his old Ducati 1098.

And what about the colour? “It was an accident, not what I chose, but I like it now. People ask if it comes in Men’s.” How does it handle? “Pretty well. You just have to be careful at higher speeds, watch for obstacles like manhole covers. There’s not much suspension travel.” Ride it much? “I ride it all the time, running errands or going to work.” On the highway? “Yeah, man, absolutely. I’ve had it on the 400, 407, 401. It’ll do 120 km/h easy. It’s awesome. It’s like an RC car but you can actually ride it on the streets.”

By now neighbours have emerged from houses to watch our photo shoot. Erika takes the pooch for a stroll, going the long way around to stay out of the photograph. A lowered, blacked-out, orange-rimmed Audi does not, pulling in and parking behind the Ruckus. The window lowers and Bisogno asks the driver, a friend of his, to move, though it’s hard to hear the conversation over the dance anthem blaring from the car’s interior. Audi now out of the shot, the chums shoot the shit. “Is that a new hat?” Bisogno asks. “Calfskin leather. Cost me $100.” “You’re crazy, man.” Some would say the same about spending $20,000 on a scooter.

“Everyone thinks I’m crazy for doing this, but it’s my baby and I love it,” Bisogno says. “It’s a real attention grabber.” Erika concurs. “It’s fun,” she says, “and gets a lot of looks.” Bisogno wants Erika to get her motorcycle licence so those looks will be directed at her. “She’s a hot girl, she’d look good on it. I look like a fat pig.” “I’ll think about it,” Erika says.