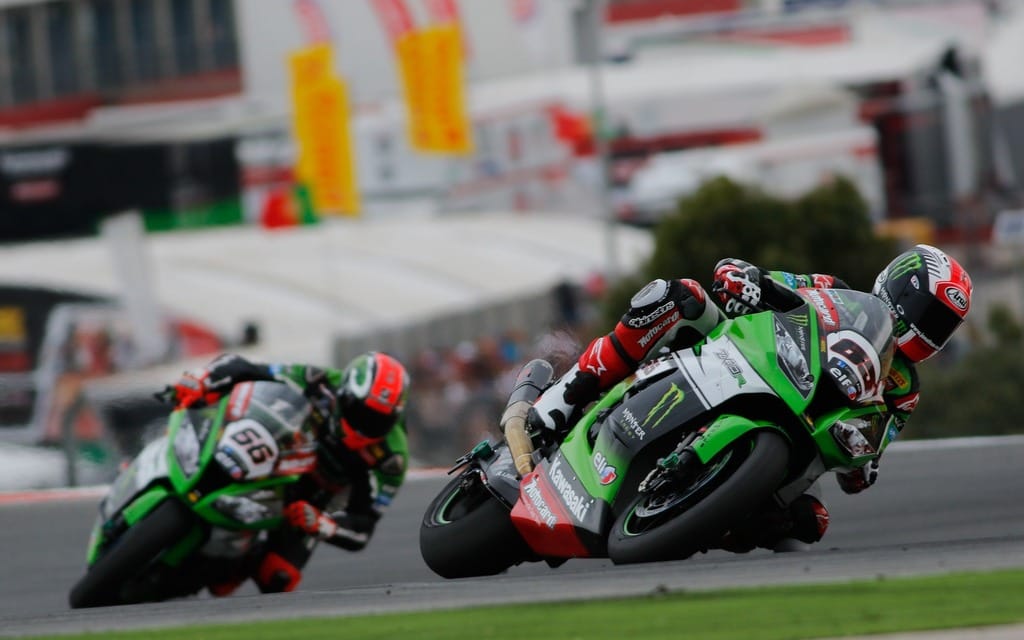 Jonathan Rea rode his Kawasaki ZX-10R to a dramatic double victory last weekend in a rain-hampered World Superbike stop at the Algarve circuit in Portimao, Portugal.

Tom Sykes (Kawasaki) had a great start in Race One, but it was overshadowed by an even better start by Rea, who went from eighth to second in just over a lap. Sykes put down a fast pace attempting to pull a gap, but Rea steadily made inroads and was able to pass his teammate for the lead. Then the rain came. While Rea–and the rest of the field–elected to pit for wets, Sykes inexplicably stayed out for another lap at a snail’s pace on slicks. After pitting the following lap, he rejoined the race just behind Rea and the pair had a thrilling battle in the wet, exchanging the lead multiple times before Sykes was hampered by a technical problem and fell off the pace. Rea went on to win, while Sykes held on for second 9.384 seconds back. Chaz Davies (Ducati) took third, 13.753 seconds adrift.

In Race Two Davide Giugliano (Ducati) led early on the strength of a good start from pole position, though Sykes would take the lead and looked strong–until his bike once again appeared to experience technical troubles that allowed Rea past (Sykes would eventually drop back to finish eighth). Rea then cruised to victory, finishing 5.416 seconds ahead of Giugliano, who equaled his best ever WSBK finish. Leon Haslam (Aprilia) took third, 6.689 seconds back. For full results from Portimao, click here.

Rea leads the overall standings with a whopping 330 points. Sykes still holds on to second with 206, though Haslam has inched closer with 199.

The next round of WSBK goes June 21 at Italy’s Misano circuit.