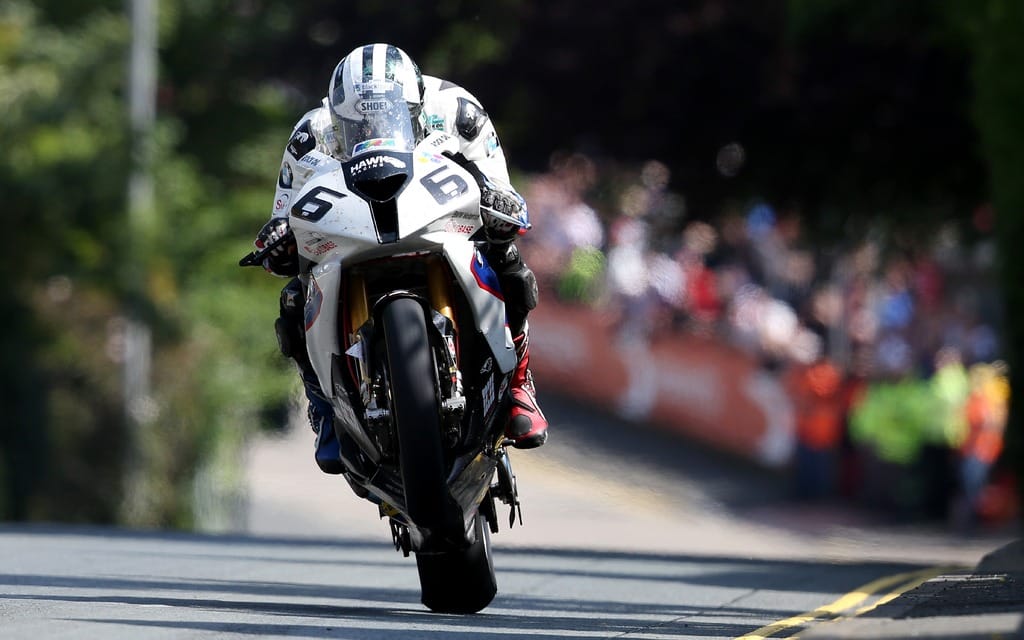 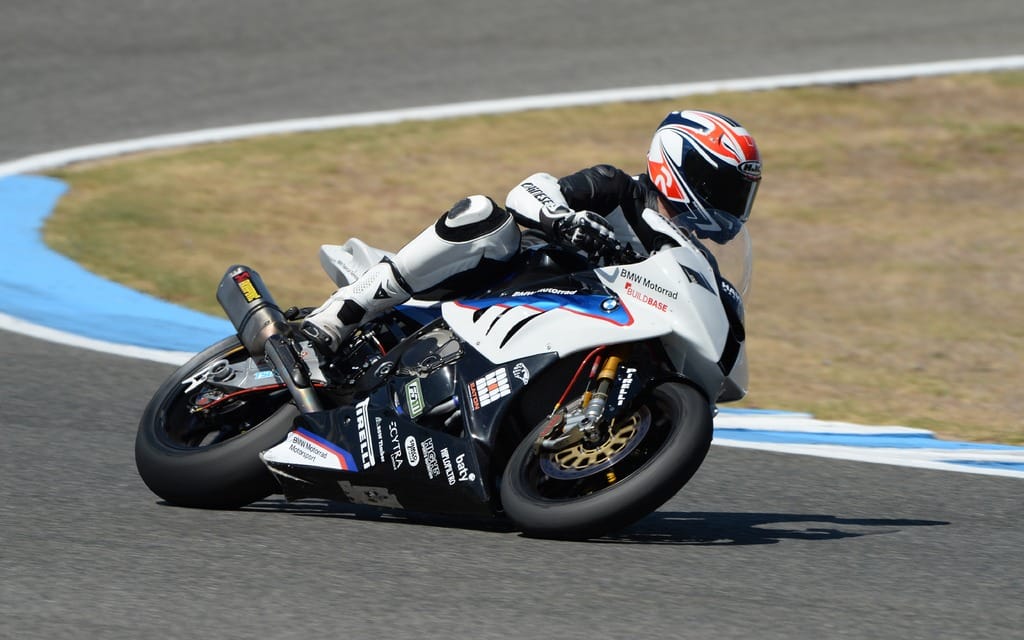 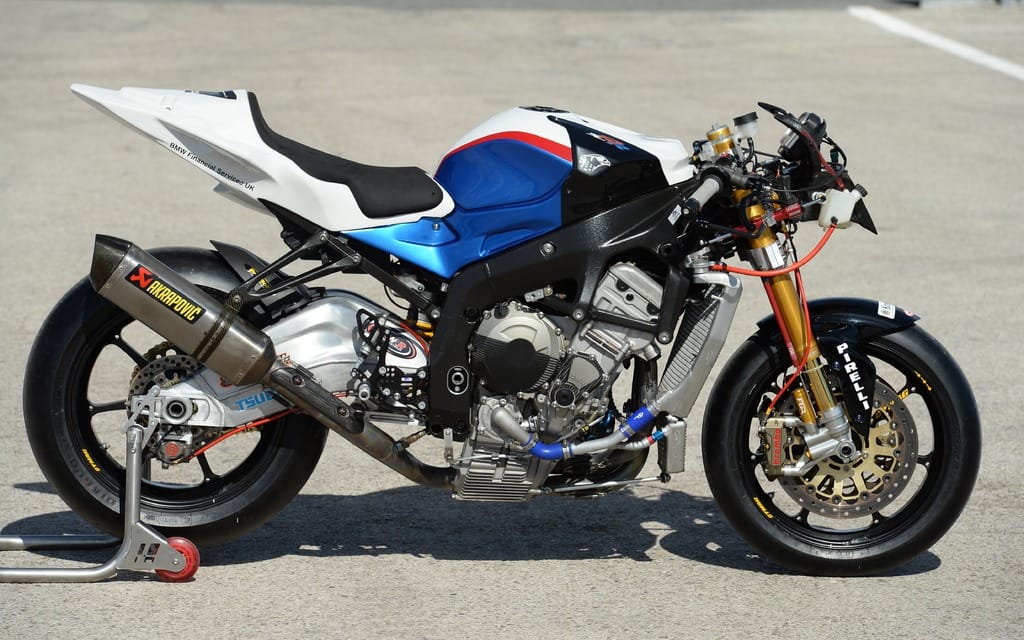 Goin’ down the road

There’s not much time to think as I’m hurled onto the back straight at Jerez with my head behind the usefully tall bubble of Michael Dunlop’s TT-winning S1000RR. I’m concentrating on treading gears to the pitch of the howling Akrapovic, looking for my markers on the left of the track, and shifting my weight rearwards in readiness to sit up and brake for the fast-approaching hairpin.

For a moment I’m imagining what it must have been like for Michael Dunlop to ride this factory-tuned weapon to those two TT wins last June. A thought immediately followed by the realization that however wild and scary-fast this S1000RR feels, riding it on Jerez’s wide open track is nothing like aiming it between the walls and hedges of the TT circuit.

The younger of the racing Dunlop brothers seemed to have taken a big gamble in November 2013 when he quit Honda after winning four TTs a few months earlier, and with no ride lined up for 2014. The man himself obviously didn’t think so. And his four more TT victories this year, three on BMWs, confirmed that the Ulsterman had taken over from John McGuinness as the man to beat on the Island.

BMW’s support was a vital part of Dunlop’s success, but in many ways the most remarkable thing about this S1000RR is not how special it is, but how ordinary. The TT bike was built in the English Midlands at the Leicestershire base of Stuart Hicken and his son Steve’s Hawk Racing.

Hawk based their first TT bike on a standard S1000RR whose frame is retained, even down to keeping the standard steel rear subframe. The frame was modified to reduce steering lock; the standard swingarm gained quick-change blocks from Harris Performance, who supplied the Öhlins suspension: classy but readily available FGR300 forks and TTX36 shock.

Other typical racer parts include Hawk’s own yokes, a Bitubo steering damper, 17-inch Dymag wheels (aluminum rather than magnesium), and Brembo lithium-alloy four-pot Monobloc front calipers biting the same firm’s iron discs. The fuel tank has an increased 24-litre capacity—almost all of which is required for two laps of the 60.73 km Mountain circuit by a BMW that slurps gas at about 19 L/100km.

The engine can also be ordered from BMW Motorrad Motorsport by any race team, but it is special, having been hand-built to the factory’s final World Superbike spec by female technician Maike Hohenlohe (who also flew to the TT at short notice to rebuild it after it had to be stripped for inspection following the Superbike win). It includes race cams, lightweight pistons, titanium rods and a balanced crank. The result? A maximum claimed 222 hp at 14,300 rpm.

In many ways the parts that keep it together are equally important. For maximum strength all engine bolts are steel, and like everything else they’re assembled using copious amounts of thread-lock and lock-wire. The radiator is a race item from MB Motor Sport, with wire mesh protection against stones. After Michael grounded the engine at the bottom of scary-fast Barregarrow, the sump was reinforced with chemical metal.

Weight isn’t a major issue at the TT so the BMW’s fairing is fibreglass. At an estimated 180 kg, the TT bike is 15 kg heavier than its British Superbike equivalent. It probably seems a bit unwieldy when it’s braking for Quarter Bridge with the tank brimmed, but it felt mighty light and racy as I fired it up with a press of the button and headed out onto the near-empty Jerez circuit.

I thought this race-tuned S1000RR might be a bit of a handful, all top-end power and aggressive delivery, but it was as easy to ride as it was fast — and it sure was fast. Exiting the last, slow left-hander it was particularly brilliant, picking up the front wheel and holding it slightly off the ground under power as I clicked through the gears, helped by BMW’s retained anti-wheelie system. The electronics and sweet fuelling helped make it easy to ride, which was useful, not least because the front brake lever was set too high and close to the bar for me.

For the super-fast road circuits, it’s geared to hit over 320 km/h, so I needed a lower gear in some turns. Fortunately it pulled hard enough through the midrange that it didn’t hesitate much when I exited a couple of bends a cog too high.

Handling was predictably stable; after all, you don’t win the Senior TT and lap at almost 212 km/h, as Dunlop did, without having a bike that behaves on bumpy Manx roads, never mind smooth Jerez.

Its regular rider is stocky but shorter and lighter than me, and it clearly works for him. Despite winning two races at the North West 200 he still wasn’t happy with the Metzeler-shod bike during TT practice, so requested a last-minute change to Dunlop rubber on the eve of the Superbike race. “Changing at that late stage was a massive gamble, but fortunately it paid off,” says Steve Hicken. “The movement that Michael had been feeling went, which probably showed it was just the type of tire. There was nothing wrong with the Metzelers; we were on for some fast laps with them. But Michael needed something he knew and was confident with for the Superbike race, because it’s so much in the rider’s head. If it had been a short-circuit race we’d have been reluctant to change, but because so much is on the line at the TT you have to go with what the rider is happy with.”

The late tire change required suspension changes that left the team struggling in the final practice session on the evening before the first race. After going in the wrong direction with the setup they were forced to make another change, with no opportunity to test it. “It was an interesting night, so for Michael to go out on the first lap of the Superbike race and break the lap record from a standing start was incredible.”

That first win confirmed the speed of both Dunlop and the S1000RR, and brought BMW a first TT victory in 75 years. Six days later, having bagged the Superstock (on his own RR) and Supersport (on a CBR600RR) races in the meantime, Dunlop was back to win his fourth of the week, his first Senior and his 11th TT overall.

As well as a phenomenal riding performance it was a spectacular effort by the Hawk team at their first TT attempt. And there’s potential to go even quicker. “If you put Michael’s best sectors together they work out at 132.8 mph [213.7 km/h], six seconds faster than Bruce Anstey’s lap record,” Steve says. “There’s no doubt he can go faster on this bike.”

But if you thought that made Michael Dunlop a certainty to be back on an S1000RR this year, hold on. “I haven’t signed anything or made up my mind yet,” he said. “I’m looking forward to going home and having a break. If the right offer comes along I’ll race next year. If it doesn’t, I won’t.”

That offer came–and it was from the officially supported Milwaukee Yamaha team. Dunlop is riding Yamaha’s latest iteration of the YZF-R1 this year, and we won’t be waiting long to see how he fares; road racing season is upon us.