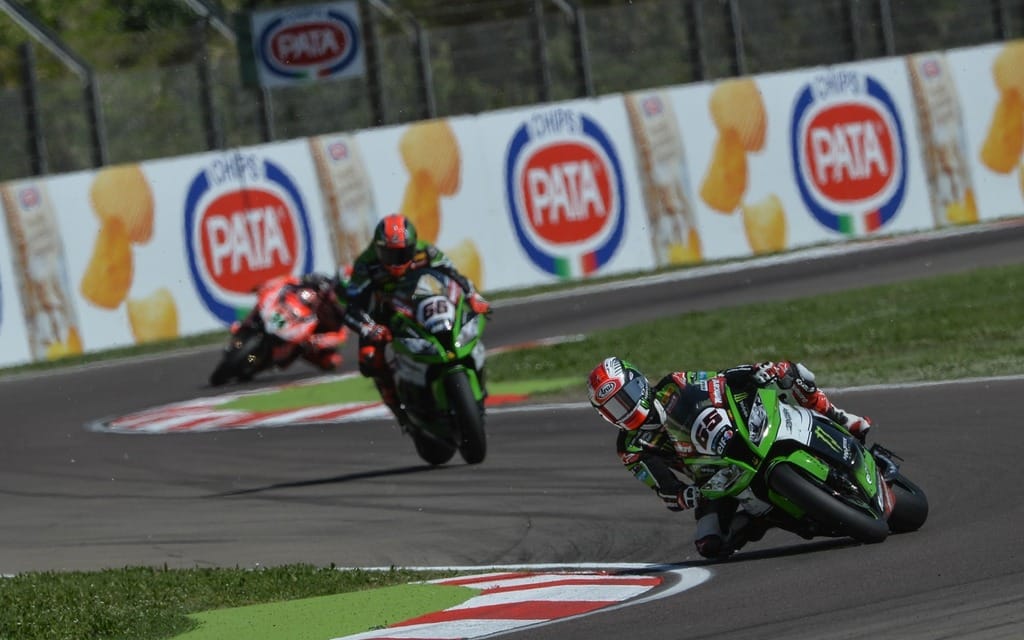 Jonathan Rea was again in dominant form at World Superbike’s Acerbis Italian Round at Italy’s Imola circuit on Sunday. The 28-year-old Ulsterman took two wins on the day, just as he did at the same circuit last season on a Honda.

Davide Guigliano, making his return from injury, looked strong and lead early in Race One, though Kawasaki teammates Rea and Tom Sykes both passed him before the race was red flagged due to a crash. Sykes took the lead in the six-lap re-start but was passed by Rea on lap two, the pair reeling off a string of alternating fastest laps. Rea held on to win over Sykes by 0.482 seconds, while Guigliano put the Ducati Panigale on the podium in third, 3.945 seconds back.

Race Two went the full 19-lap distance and again it was Rea and Sykes who separated themselves from the pack. Though Sykes kept close for a while, he was never close enough to make a move. He settled for second, 4.399 seconds behind Rea. Aprilia’s Jordi Torres claimed his first WSBK podium in third, 26.020 seconds off the pace. For full results from Imola, click here.

Rea has been unstoppable so far this season, taking eight wins in 10 races. “It has been incredible this weekend and I do not know what to say because this kind of run has never happened to me before,” Rea said. “I am just enjoying the moment.”

He also enjoys an 87-point lead in the overall WSBK standings. Leon Haslam (Aprilia) is second with 153 points, while Sykes climbs to third with 128.

The next round of WSBK goes May 24 at Donington Park, England.