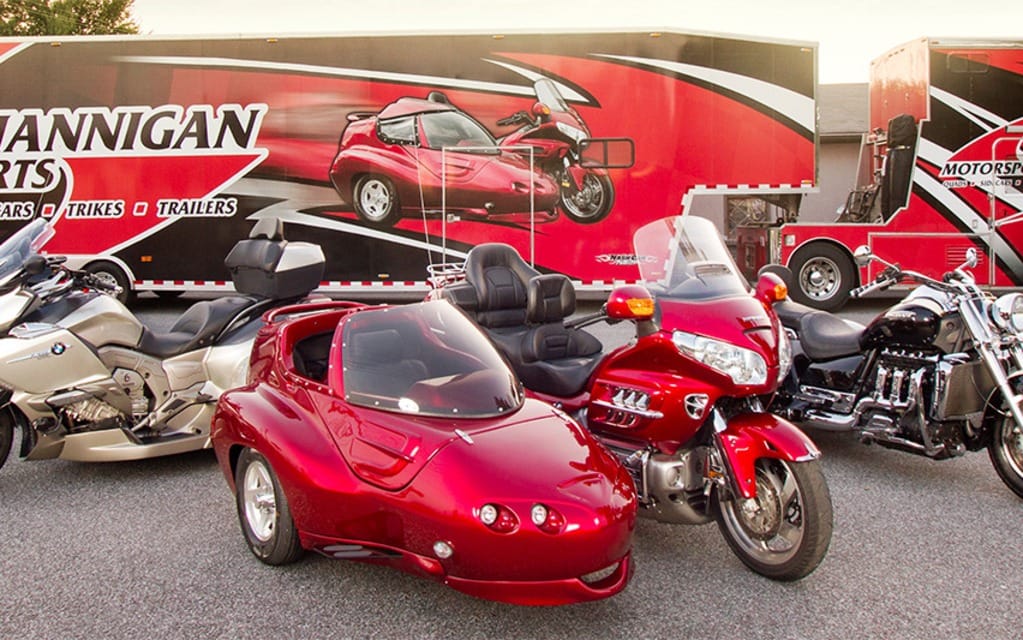 Vetter who? David Hannigan did fairings too

It began with an email chiding us about a Greg Williams column in our print magazine. Williams relates the story of Glen Barreth, who participated in fairing guru Craig Vetter’s fuel economy challenge. “The article gave a lot of background to Vetter,” the reader wrote. “Why don’t you write about David Hannigan and his fairings, produced in Toronto before he took on sidecars and trikes. And he’s Canadian, which would fit the title of the magazine: Cycle Canada.” Point taken.

David Hannigan, now 65, was born in Big River, Saskatchewan, where he graduated from high school—but only just. “I barely passed grade 12 because I was building an Indian chopper when I should’ve been studying,” Hannigan says. “I didn’t much care what my grades were, I was more interested in getting that bike built. I knew I’d end up in the motorcycle industry, and in 1968 moved to Saskatoon and got a job at a motorcycle shop.”

It was there he began fiddling with fairings. By the time he and wife Ruth Anne moved to Toronto in 1974 and opened a BMW dealership, Hannigan had already built his first Hannigan fairing. “People would come to the shop and see that fairing on my R90S and want to buy it, so a year after starting the dealership we started the Hannigan Fairing Company,” he says. At first they outsourced the fibreglass work and just did assembly. By the following year they were doing all their own fibreglass and metal work. “We realized that if we were going to do this we need to do it ourselves.” Business peaked in 1983. “We built 454 fairings that year and had eight employees. About 75 percent of those fairings were going to the U.S.”

So many stateside customers contributed to the Hannigans’ decision to move to Murray, Kentucky, in 1992, though by then demand for fairings was down. “There were so many original equipment manufacturers doing them,” he says. They continued producing fairings until 1998 (they made 12 that year). “In 1999 we sold the moulds and the rights to a guy in Paris, Arkansas. He continued building them until around 2011.”

But the fairing downturn didn’t leave Hannigan destitute; like any savvy businessman, he’d diversified—into sidecars, initially. “The first sidecar happened in ’81,” he says. “It was fairly standard, sort of looked like a TR500 made by Steib for BMW. But we always wanted to build something that was very aerodynamic and roomy, a two-seater.” That vision took shape in 1985 when they built the first “sorta spacey-lookin’ Hannigan sidecar”—the Astro—to pair with his Yamaha VMAX. “The Astro was unique in its day. There was good demand for it.”

Hannigan Motorsports now offers a wide range of classic, sport, and touring sidecars—but most of its business is in trikes. “Our first trike was built in ’96,” Hanngian says. “Actually, that was a tri-car, a trike with a sidecar. We built our first normal trike in ’99 out of a Gold Wing.”

Now Hannigan has a complete range of trike conversions spanning Honda, Harley-Davidson, BMW, Kawasaki, Yamaha, Indian and Triumph models. “I think we’re up to 23 different trikes, and we’re working on some new models as well—the Victory Cross Country and Indian Roadmaster. We’re the only one building a BMW trike and the Yamaha Venture, just about the only one with the Harley V-Rod, and we do the Kawasaki Vulcan series. We diversified to try and keep our numbers strong.” As you might guess, Gold Wings account for a good portion of those numbers—but not as much as they used to. Hannigan says that four years ago Wings were about 50 percent of production; now the number is down to 25 or 30 percent. Hannigan’s BMW K1200LT trike is a surprisingly steady seller. “Since we came out with the LT conversion in ’03 we’ve averaged one a week. The new K1600GTL is turning out to be the same.”

For Hannigan, diversification doesn’t stop with three wheels; Hannigan Motorsports also makes a Gold Wing “quadracycle.” The idea for the quad initially came from a reverse trike Hannigan was working on in 2006. “We were testing and tweaking it, trying to get it to track properly,” he says. “One day I was looking at it and thought, Gee, I should build another one and just put it on the front of a trike.” They did, and showed the reverse trike and the quad at Daytona in 2007. Development of the quad continued, including a run to a Gold Wing rally in Billings, Montana, in 2008. “I wanted to put it through its paces going up the Beartooth Pass,” he says. “Because it has such a long wheelbase and doesn’t have the single wheel at the back, which a reverse trike pivots around, it’s very stable.” He’s even taken one to Deals Gap. “You can do full power slides with that thing, rear wheels just squawking. It’s a fun toy.”

But, he concedes, it’s expensive (front and rear kits cost $7,595 and $8,395—and that’s before installation and options), and there can also be licensing issues. “It’s not a car; it’s a four-wheel motorcycle. That’s been a restriction. We tell people who are seriously interested to take a picture of one to their local constabulary to see what they’ll say. We sell a few of them, but not a lot.”

Hannigan is celebrating 40 years of manufacturing with a 40th birthday party this June—and guess what, Craig Vetter will be there. “We’ve known Craig for many years,” Hannigan says. “In some respects he’s been a bit of a mentor. I had one of the original Vetter fairings in ’71. I rode to the BMW national rally in Tablerock, North Carolina, in ’74 and he was doing a sidecar seminar. I had no interest in sidecars at the time, but I had enormous respect for him because I’d been riding behind one of his Windjammers prior to perfecting my own fairing. I always appreciated his designs.”

Speaking of birthdays, we actually telephoned Hannigan on his 65th. “Making a connection back to Canada is a great birthday present,” he says. By the time this is published our best wishes will be belated, but we send them out, just the same.