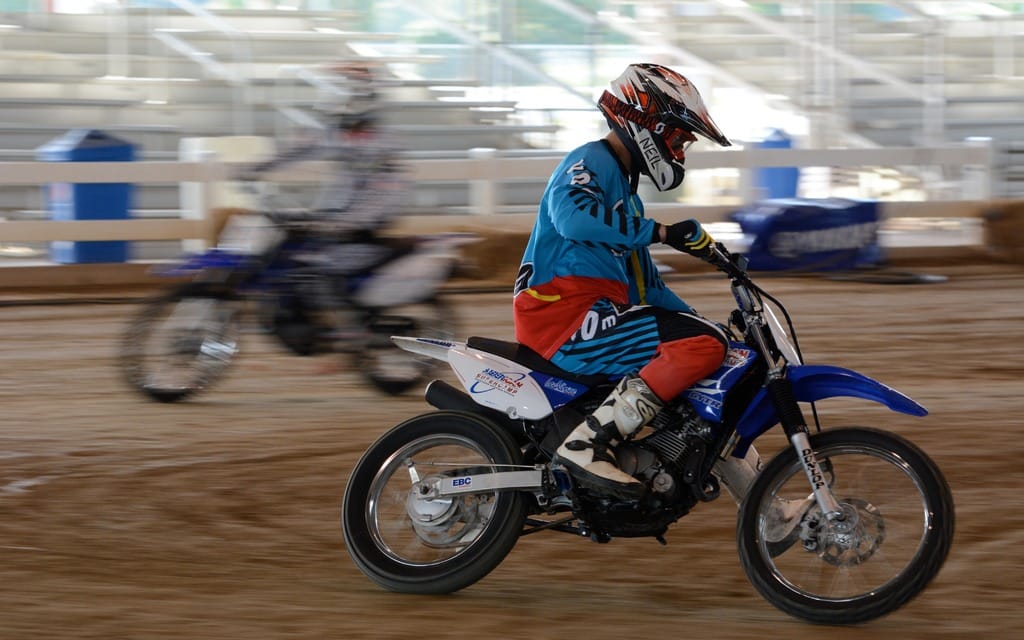 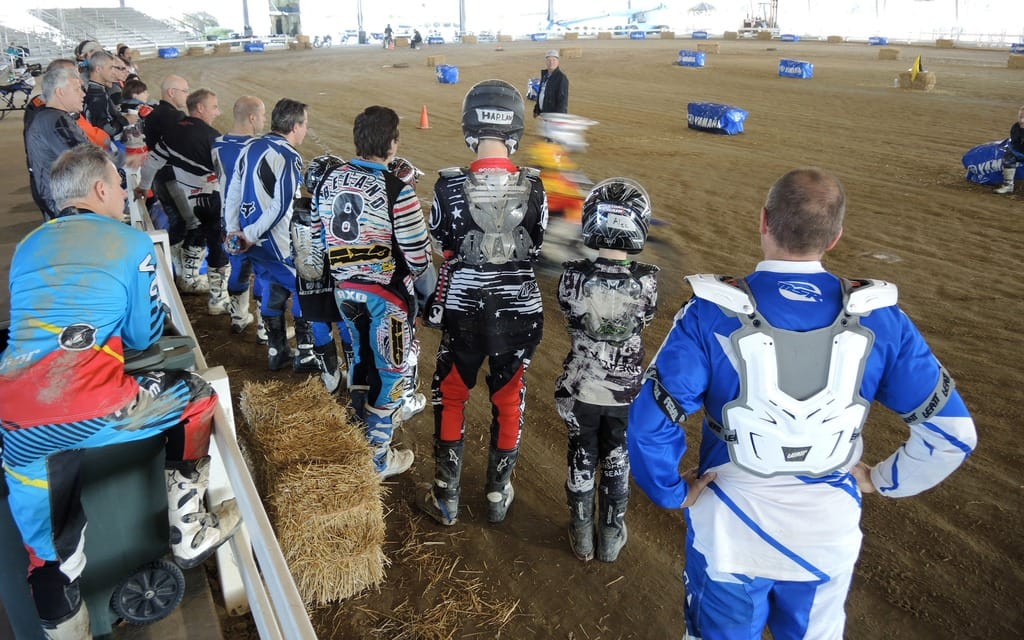 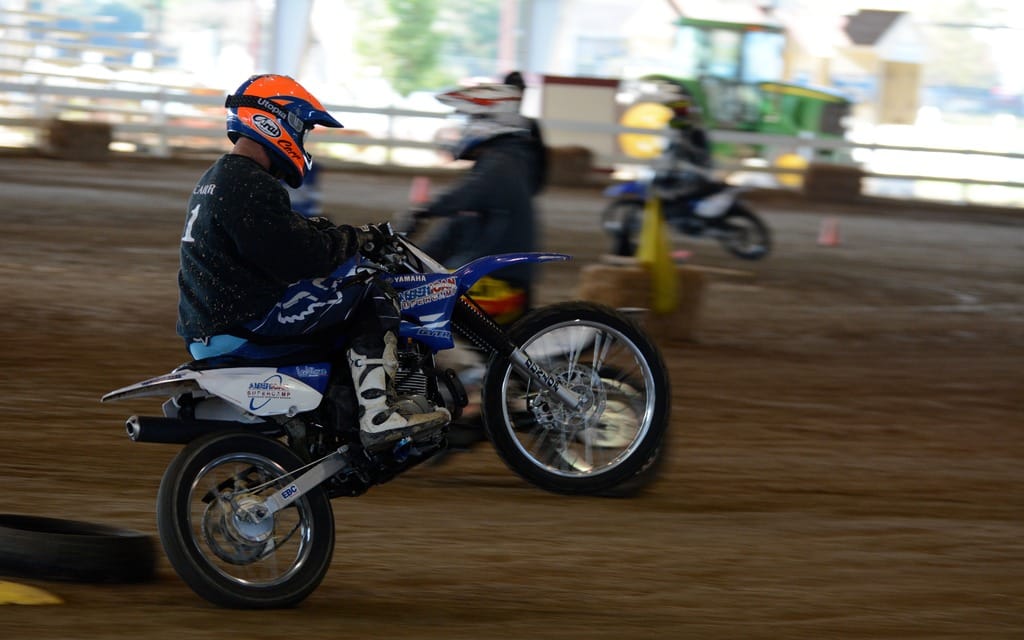 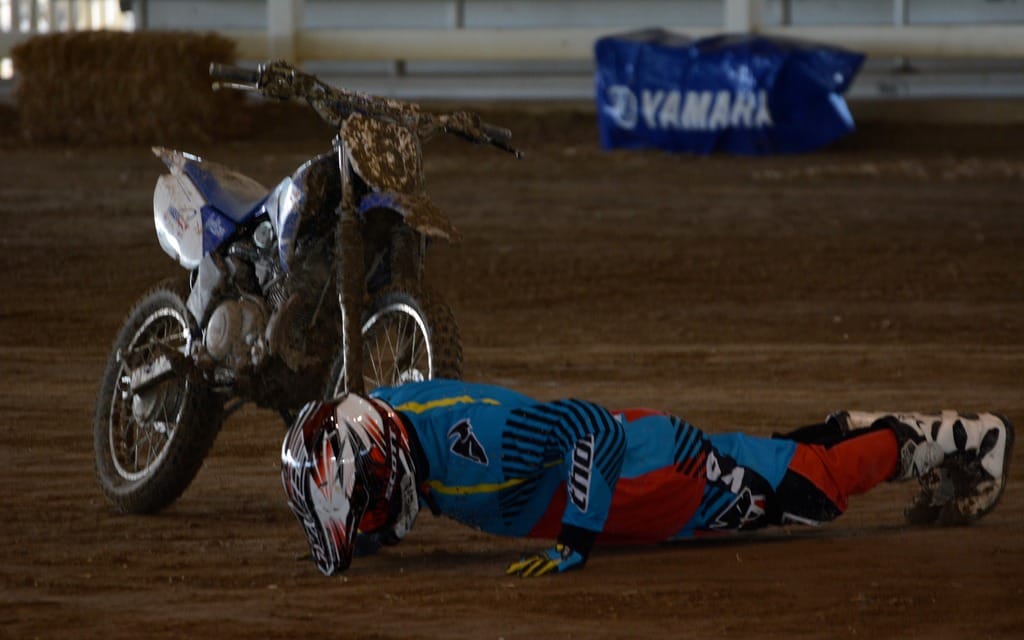 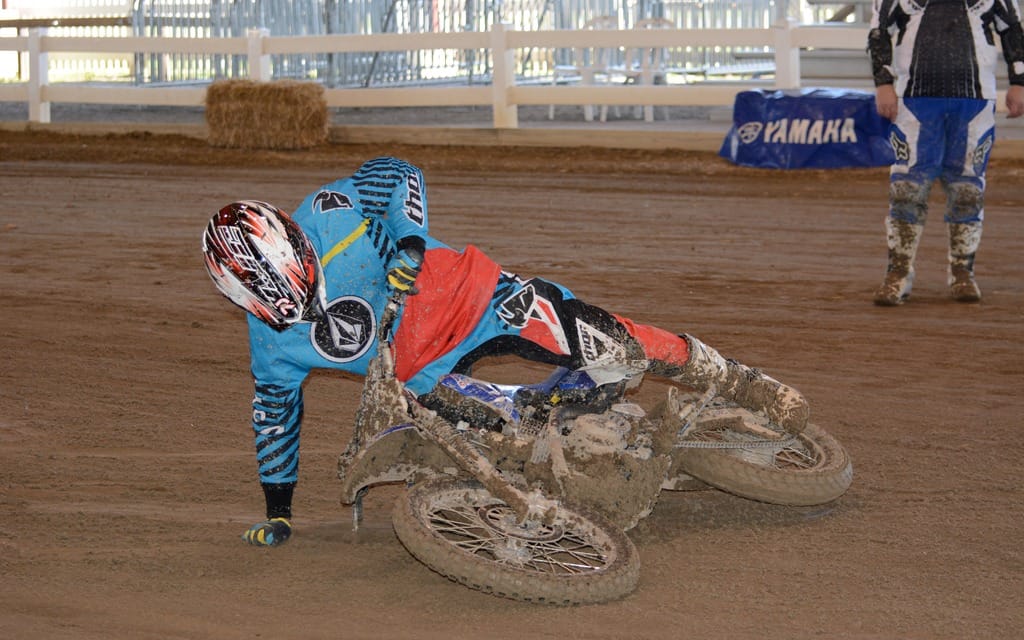 American Supercamp may sound grandiose, but when it comes to flat track, Americans have the right to crow

It’s easy to lapse into bad habits on a motorcycle. The words “you’re under the bike” rattle about my helmet and I realize I’m talking out loud, talking myself into how I should be riding. Instead of sitting on top of the Yamaha dirt bike, I’ve dropped a shoulder and am tucking underneath it as you would a roadracer. “Neil, you’re under the motorcycle,” the voice repeats, but it’s not my voice at all. It’s seven-time AMA Grand National flat track champion Chris Carr, and he’s riding so close to my rear wheel that his voice cuts through the din of our engines to the heart of the matter.

If you’ve been alive long enough, you’re aware that everything cycles through and back again. The compact disc revolution killed the LP, and yet, 30 years on, record pressing plants are back in business and no serious audiophile (or hipster) is without a turntable. You can draw parallels in motorcycle racing. The ascension of road racing and (especially) motocross in the ’70s and ’80s relegated flat track even deeper down the order of cult pursuits. Even those of us who love it envisioned a day when it became as marginalized as trials or hillclimb. Every few years a blip of interest would be interpreted by the flat-track-faithful as a revival, but just as the Grey Cup game isn’t indicative of the general health of the Canadian football league, the hubbub faded away and flat track soldiered on to what seemed like a sure date with irrelevance. And then something odd began to happen.

Many roadracers train by riding motocross, so there was nothing unusual about seeing a photograph a few years ago of Valentino Rossi on a Yamaha 450 motocrosser. I was in Italy, leafing through Motociclismo magazine at an airport newsstand killing time for a flight home. I had flipped past the page with Rossi’s motocrosser but then went back to it. Something looked odd. Sure enough, something was odd. Instead of knobbies Rossi’s motocrosser had 19-inch Goodyear (now branded Dunlop) flat track tires. The most famous motorcyclist in the world since Evel Knievel was a fan of flat track and used it as part of his training regimen.

In North America it’s hard to comprehend Rossi’s reach. If he greeted each morning by swallowing a bar of soap, every club racer from Scotland to Sicily would do the same. Next came more photographs of Rossi’s ranch, and I learned that in addition to his oval track he had a TT track that incorporated left and right turns. A man can’t ride alone, and so the social Rossi brought his Grand Prix friends along, and now half the GP paddock is flat tracking. And then a Spanish kid named Marquez won a pair of MotoGP titles, and guess what? He’s a flat tracker, and a good one. And then, in 2014, an end-of-race-season event called the Superprestigio in Barcelona pits Marquez and Co. against a few Americans shipped over to boost the level of competition, including Grand National champion Brad Baker. Baker wins, but this winter, at the second running of the event, Marquez edges out current Grand National champ Jared Mees. And then Mees travels to Australia and wins an event organized by former World Superbike champ Troy Bayliss. Flat track has wind in its sails for the first time in years, and the roadracers are to thank for it.

But before the buzz, before Rossi and Marquez, American Supercamp founder and ex-roadracer (and current AMA roadrace team principle) Danny Walker posed this question to Chris Carr, who at that time in the ’90s had just won his first Grand National championship: how do you slide a motorcycle? Carr, like most naturally gifted riders, had never thought about it. But at Walker’s behest he analyzed his technique and created a guide for the rest of us. And this is the basis of the American Supercamp curriculum.

Carr was the ideal rider to base a school around. Unlike more flamboyant riders like Jay Springsteen or the late Ricky Graham (or our own Don Taylor), Carr was never a throw-it-at-the-hay-bales stylist, but rather an efficient, calculating racer. He could be aggressive, when that was called for, but Carr’s style minimizes risk (seven titles are as much a testament to longevity as skill). It seems a paradox, but going fast on dirt is all about carrying maximum speed while keeping the wheels in line. Broadsiding is fun to do and fun to watch, but it’s riskier and slower than a rider efficiently putting power to dirt.

Motorcycle schools with famous ex-racers can often be a letdown. Freddie Spencer’s now-defunct Las Vegas school was like stepping into the 1980s. Old racing videos showed on the screen while Spencer regaled the worshiping attendees with tales of the old days. While I respected Mr. Spencer’s achievements, I really just wanted get my knee down on the pavement.

Boss Walker begins the day at Supercamp with a rundown of rules and procedures, and says that Carr will arrive later in the morning. We suit up and begin what will be the first of many sessions over the two-day camp. The basis for success in any kind of motorcycle racing is body positioning. If you’re sitting correctly on a motorcycle, you’re minimizing the negative effects of plunking a heavy weight (you) on top of the bike, and maximizing your control over it. The point of Supercamp is to learn what you’re doing wrong and to correct it, and you learn what you’re doing wrong by falling off.

They’re not much bigger than minibikes, but the 110 cc Yamaha singles are low enough, and slow enough, that tumbles aren’t any trouble. Already, in the first session, I lose the front wheel and crash. After the session (three groups rotate through 20-minute riding stints) I approach the motorcycle-cum-rocking chair that’s used to work on body positioning. It’s here that I meet Carr. I hardly have time to get a good look at him and already he’s tugging and folding me into the correct body position. I haven’t been manhandled this much since the time I drank tequila at a Knoxville country-and-western bar. Carr is direct, intense, focused. He’s invested in this school. He wants you to learn. There are no stories of the good old days. I like this man.

My hips are yanked to the top edge of the seat and I’m shown how to open my hip to let my foot naturally find the ground, like a lowered counterbalance weight and not a limb thrust blindly into space. I am instructed not to twist my body. I am shown how to use my right leg to push the motorcycle down into the corner. I’m told to relax. I’m shown how to grip the handlebar. Carr takes my fingers away from the left handgrip and then replaces them one at a time, so gently that if the grip were a tube of toothpaste with the lid removed, no paste would squirt out. All the time Carr is watching me, dipping his head this way and that. Finally, he’s satisfied. Almost. He puts a hand on my shoulder and tells me to roll inward and contract my abdominal muscles. My sciatic nerve screams in protest but Carr is satisfied. And then we rock the training bike to the right and do it all over again.

Walker’s school, in the nearly two decades that he’s run it, has been honed to near perfection (the pasta for lunch was slightly overcooked, but I kept quiet about it). Walker knows your bad habits, he knows when you need to do a remedial exercise, and he knows when you need to be challenged afresh. Getting cocky? OK, let’s change the layout of the track, ride with one hand on the handlebar and the other on the gas cap, and soak the dirt until it becomes impassable slurry. Do we have your attention now?

The difficulty of riding schools is that to gain what they have to give, it’s necessary to immediately implement the techniques. But until your body commits to muscle memory all you’ve been taught, the tendency is to depend more on intellect than instinct — I was concentrating more on technique than looking where I was going. But to ignore technique is foolhardy (after all, you’re paying for knowledge, so to dismiss it is a waste of money and time). A number of American Supercamp drills are designed to work only if your technique is, at the very least, OK — like the mud drill.

Danny Walker drags a garden hose to the centre of the corral and soaks the dirt of the miniature oval. We set out one at a time like men with hangovers released from the lockup. We’re all heading to the same destination but can’t seem to agree on a direction, and the bike wants nothing more than to bury its nose in the mud. I make a lap and fall. And then, when I’m back on my wheels, a man ignores the corner completely and takes out my front wheel. We collapse in a pile, exchange pleasantries, and untangle handlebars.

Now imagine this: the same drill but with the left hand resting on the gas cap. A recipe for carnage. Except it’s not. Everyone’s riding improves significantly, and the reason is this: the bike simply won’t turn in marginal traction conditions unless your body is positioned correctly on the motorcycle. It’s remarkable. And it doesn’t matter if you’re young, old, good or bad. Everyone improves, lending credence to my theory that the only problem with the motorcycle is that a fallible human is required to sit atop it.

In between riding exercises Carr, Walker, and the other instructors demonstrate correct form. They are all very good. Carr, like all of the great riders I’ve seen up close, is otherworldly. It is as if the laws of physics do not apply to him in the same ways they do to you and me. He rides in a straight line then does a 360-degree spin and keeps going. As I’m cornering his finger appears in front of my nose as if by magic, pointing to the corner exit. Look where you want to go is his point, but I’m so startled I look at him, and then ride into him — which, in a way, proved the lesson: I looked at him, then I hit him. (I apologized. He called it a “learning moment.” I thanked him again. I felt nine years old.)

Nearing the end of the second day I was, to be honest, a little disappointed at my progress — the little wheels of the little bikes seemed to get away from me faster than I’d hoped. I wasn’t humiliated, but I was humbled, and riding in close proximity to Chris Carr was unsettling: as impressive as it is to mix it up with a rider like him, it also lays bare the truth about your own skillset. As Itzhak Perlman is to the fiddle, Carr is to the flat track motorcycle, and yet here I am, hardly able to hum in tune.

And then I totally nail my final session and the clouds clear from my mind. I’m relaxed, I’m passing people, and my body position is much improved. And then I get cocky, too aggressive, and fall. Another lesson learned: don’t think, for even a moment, that you have the skills of Chris Carr.