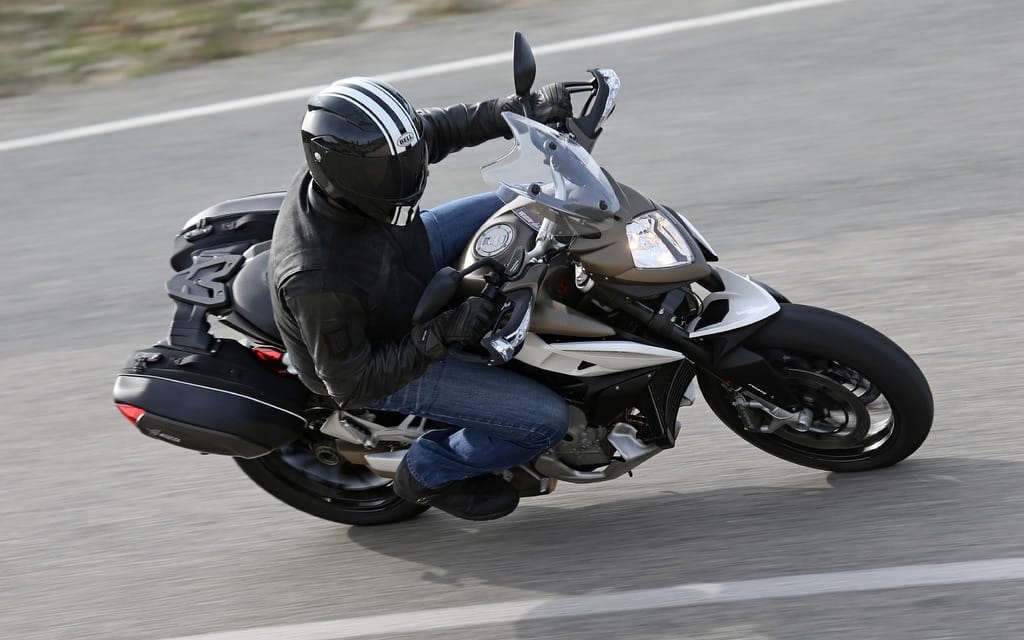 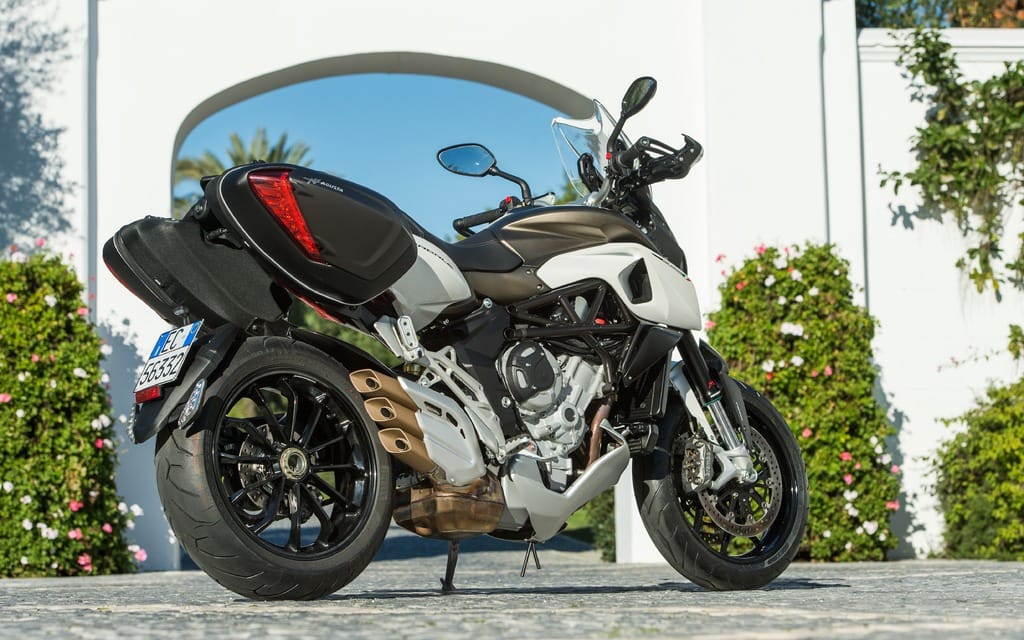 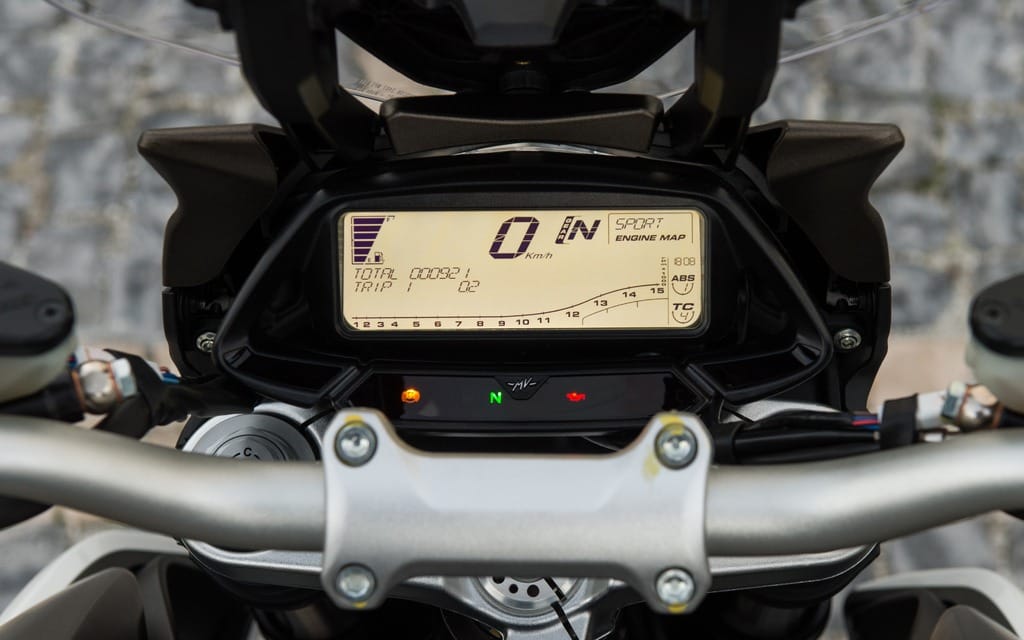 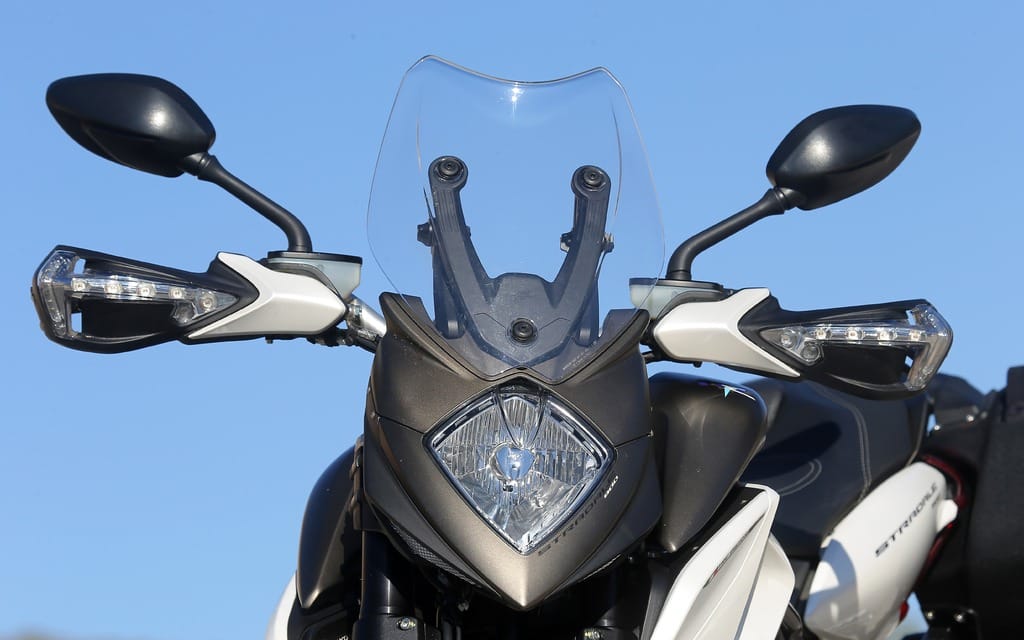 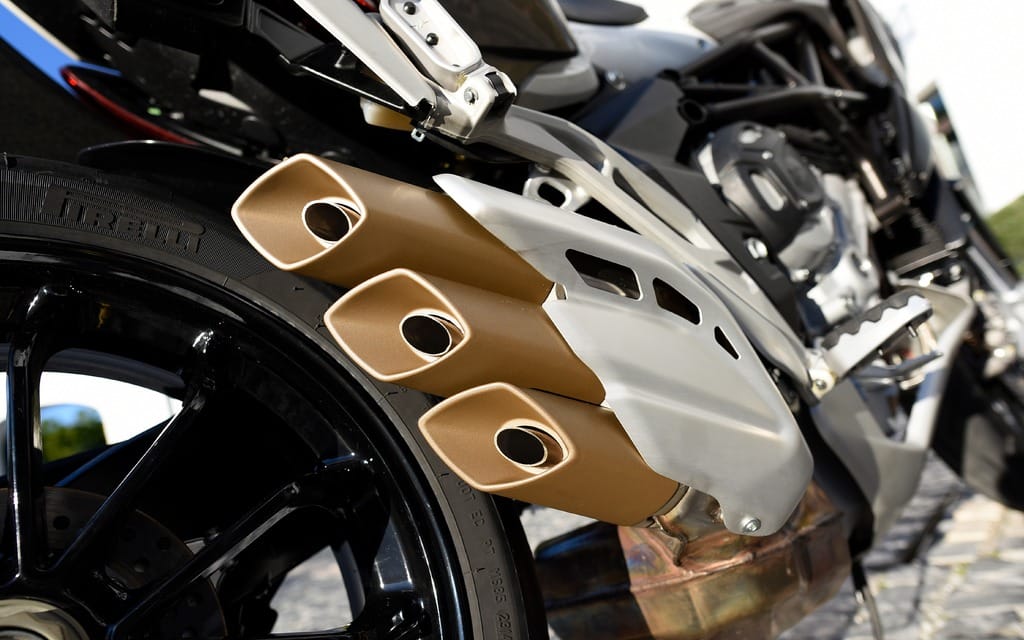 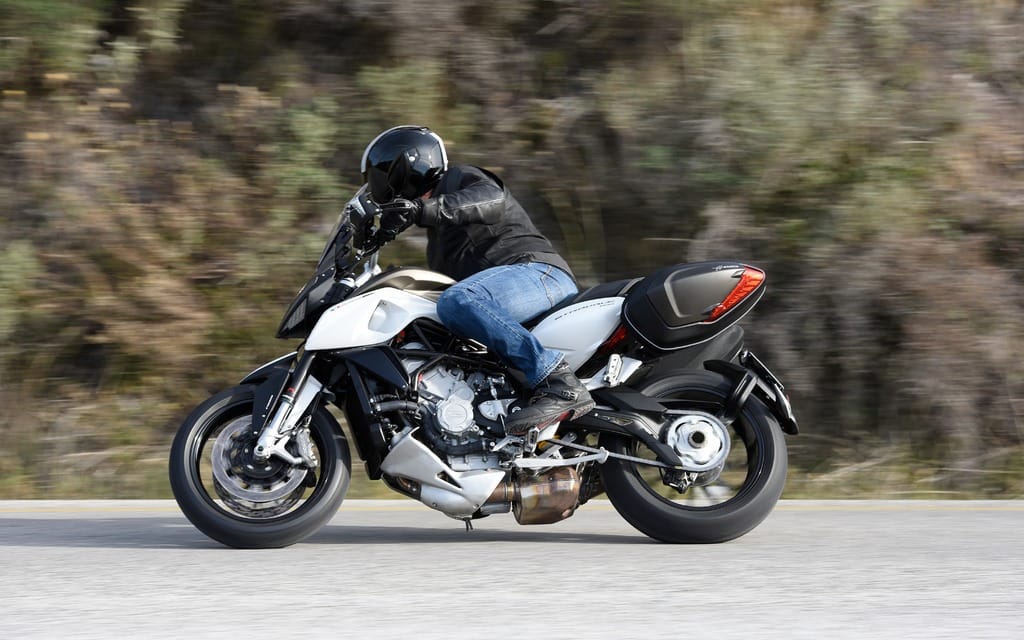 Brother from another mother

It feels like déjà vu. I’m standing in the cobblestoned courtyard of the Hotel Finca Cortesin near Casares, Spain, watching MV Agusta staff wheel out bikes to set up for the launch of the Stradale 800. It’s odd to be watching the setup. Usually press members arrive after everything has been prepared, checked, and double- checked to be as close to perfect as possible (first impressions are important, even when they’re wasted on lowly magazine hacks). But I actually arrived before MV staff, the result of having two separate press events in Spain within 10 days, which allows me a few days off in between (there are worse things in life than being stuck in southern Spain for the weekend).

This is my first look at the Stradale 800 in person, though it feels like I’ve seen it before. At a glance it’s strikingly similar to MV’s Rivale — so similar, in fact, that initially I think they’ve simply taken a Rivale, affixed bags and a windscreen, and decked it in Stradale decals. Upon closer inspection, and after a spirited test ride, it turns out I’m wrong and right.

First, the similarities, which are mostly skin deep. Beyond its bags and screen, the Stradale appears to be nearly a carbon copy of the Rivale. The distinctive Spy vs. Spy–styled snout is retained, and the two bikes share the same tank (capacity is increased to 16 litres from last year’s Rivale tank — 12.9 l — though the 2015 Rivale receives the bigger tank as well). Bodywork is almost identical, and aside from the Stradale’s reshaped seat, the silhouette is eerily similar. The Stradale also has MV’s signature triple-piped exhaust, though if you look closely you’ll notice the pipes are angular (the Rivale’s are round). And, of course, the Stradale is powered by the same 798 cc inline triple as the Rivale.

Actually, that’s not entirely true. Yes, it’s the same engine, but it’s been re-tuned to improve low- and mid-range torque, and has its own dedicated engine maps (Sport, Normal, Rain, and Custom). It has a more voluminous exhaust system as well (up 2.8 litres from the Rivale’s). The incorporation of a hydraulic clutch with integrated fluid reservoir — the first hydraulic clutch on MV’s three-cylinder platform — helps make the engine slimmer. Also, what’s not immediately apparent is that the three-banger is housed in an all-new frame. Its ALS tubular steel structure (incorporating aluminum side plates in its mid-section) is drawn from MV’s other models, but the frame’s dimensions and design are unique to the Stradale. The bike also gets a new single-sided swingarm, which is stretched to 607 mm. That contributes to the Stradale’s longer 1,460 mm wheelbase — 50 mm longer than the Rivale’s — for improved stability. Stability at a standstill is also improved due to a lower seat (11 mm lower than the Rivale’s) that will allow more people to put more foot on the ground. However, at 870 mm it’s still a tall perch, though a seat that’s 20 mm lower is available as an option (a higher “sport” seat is also available, which is basically the same seat as the Rivale’s).

The idea is to take the sporty, supermoto-styled Rivale platform and tweak it to provide more everyday usability. Brian Gillen, three- and four-cylinder platform manager for MV Agusta (and a Buffalo native) describes the Stradale as MV’s first multi-purpose bike, specifically calling it a “light tourer.” (At only 181 kg dry, it is light — though I don’t think that’s what he was getting at.) Giovanni Castiglioni, MV boss and the world’s most beautiful man, sees the Stradale as straddling the line between a touring bike and a superbike (that’s quite a line). “This is our interpretation of a touring bike,” he says. Whatever your interpretation, touring requires luggage, and the Stradale delivers with sharp-looking, zippered-yet-lockable side panniers with integrated LEDs. (Staffers call them “iconic,” though due to their limited capacity — integrated LEDs gobble up space — “ironic” may be a better word.) The addition of a modest windscreen helps fulfill the touring brief.

On paper, the Stradale looks like a better all-round package than the Rivale — but what about on pavement? MV’s planned itinerary is just shy of 200 kilometres, heading southwest from the hotel and looping northeast to Ronda before returning via San Pedro Alcántara. Our ride leader describes the road surface on the first section as “very slippery,” though this doesn’t seem to affect his pace as we drone south on the autopista. I select Rain mode, done using the starter button (modes can be changed while in motion), which reduces horsepower to 90 and smooths power delivery nicely. The windscreen is height-adjustable through a 50 mm range with the tilt varying five degrees, all done with two hands and no hand tools. In its highest setting, the screen deflects air just below my chin and I experience no buffeting.

The Stradale is calm and composed at speed on a smooth highway, and fuelling is exemplary — which is especially baffling, considering poor fuelling has been CC’s main criticism of MVs tested in Canada. Clutch pull is firm, and shifting through the six-speed transmission sublime. The seating position falls somewhere between supermoto and the much-loved ADV stance: upright, lots of room through the legs, and the grips at a comfortably wide reach — it’s like being seated at the high-top table of your local pub. Grips are protected by handguards with integrated turn signals, which do a decent job deflecting wind (though later, in the mountains around Ronda, I lament the lack of heated grips). The LCD displays a wealth of information (speed, rpm, gear, mode, fuel level, engine temp, time, ABS and TC settings, and odo or trip meters) and is manipulated using a thumb pad on the left switchblock. The screen is clear, but some information is too small to decipher. We pause before turning north at Taraguilla and I switch to Normal mode (still 90 hp, but with slightly sharper acceleration). The ride leader warns that the pavement is changing to “very bad.” I’m used to Canadian roads — how bad could they be in southern Spain?

As it turns out, quite bad. The A-405 isn’t potholed, but is riddled with bumps and deceptive hollows that tax the Stradale’s suspension. The adjustable 43 mm Marzocchi fork is firm and well damped, as is the pro-link Sachs shock. There’s 150 mm of travel at either end, and though the bike never bottoms out, it does, at times, become unsettled when exiting the bigger hollows (in its defense, it’s a very sporting pace). Still, feedback is good, 17-inch rims are wrapped in grippy Pirelli Diablo Rosso II tires, and turn-in is light, making the Stradale a confidence-inspiring mount in dubious conditions.

With a pair of sure-stopping radially mounted Brembo four-piston calipers French-kissing 320 mm front rotors (rear is a 220 mm rotor and two-piston clamper), a feathery touch is all that’s required. I discover this on the return run from Ronda along the serpentine A-397, where I get stranded behind a slower rider. (I’ve yet to muster an Italian’s courage for passing on blind corners. I hope I never do.) He’s quick in the straights, but stacks it up at every apex. The Stradale’s strong brakes, however, are easily modulated; a light, two-fingered touch is all I need to maintain an adequate gap.

Sport mode unleashes the full potential of the torquey triple and its claimed 115 horsepower. The rest of the ride is spent gleefully tossing the bike through twisties, hanging off in hairpins, and fisting the throttle on exits, which results in an occasional power-wheelie. The standard quickshifter gets a workout, which now allows clutchless downshifts (as long as you’re above 30 km/h). It functions well, though once or twice I sense headshake when upshifting under full throttle. I arrive at the hotel smiling, but a little sore; the Stradale’s seat is more forgiving than the Rivale’s, but it’s firm, and its sculpted shape locks you in one position.

The Rivale and Stradale are one species separated at birth to different continents and left to evolve on their own. They’re similar, but slight variations make for different machines. The Rivale is a twitchy, hard-core street-going supermoto, while the Stradale is stable, friendly, and refined. And versatile. With a windscreen and bags the $16,995 Stradale is $1,000 more than the Rivale, which makes the Stradale a sensible buy. Almost.